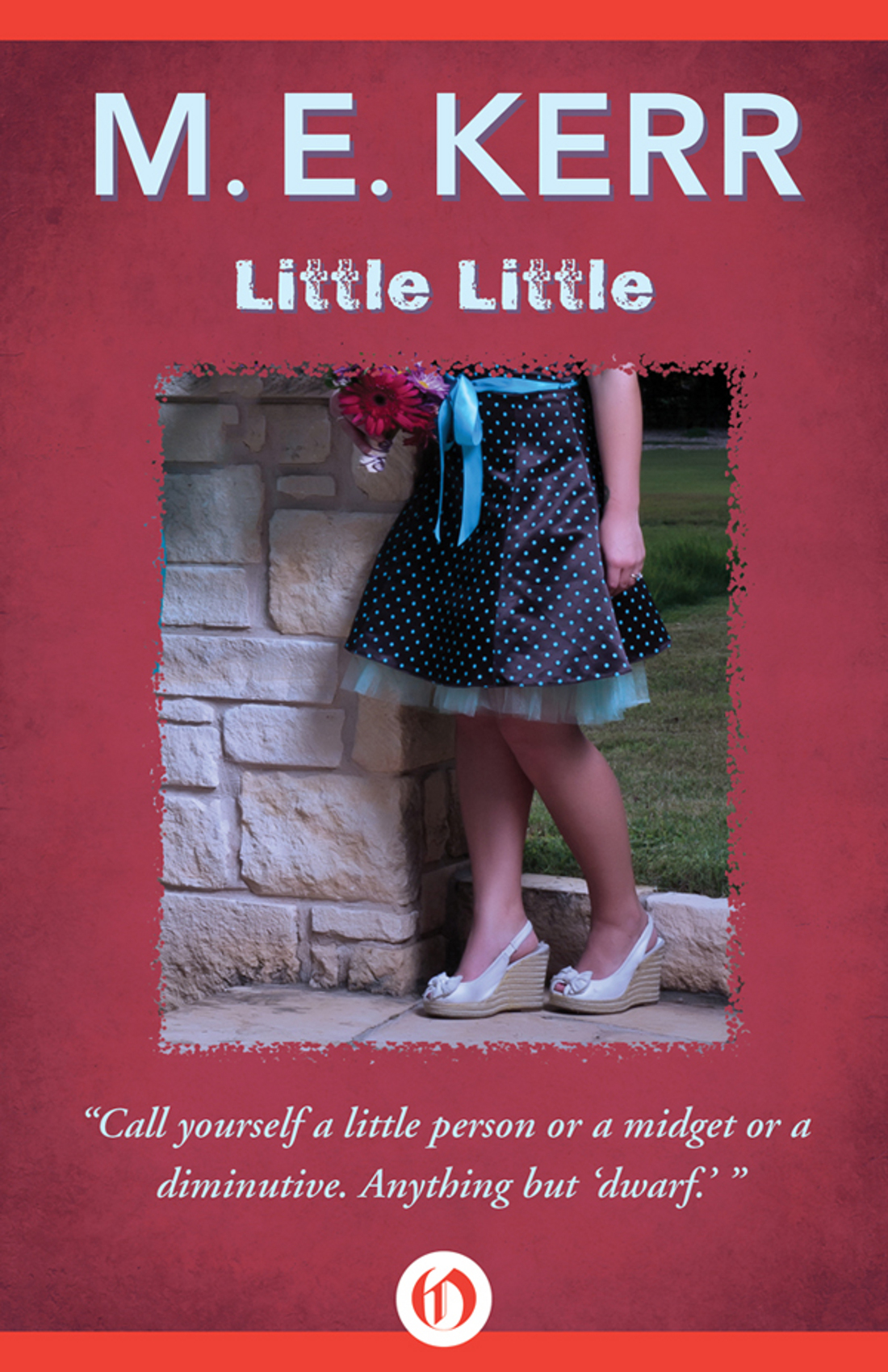 For Alison and Thor–

“S
YDNEY,” MR. PALMER SAID
, “you are on your way to becoming the most famous dwarf in this country, no small thanks to me. And now I have a favor to ask you.”

Those words, spoken on an ordinary August day, in the offices of Palmer Pest Control, were the beginning of my new life.

So far, age seventeen, I had had two other beginnings.

One was my birth and abandonment to The Twin Oaks Orphans’ Home in Wilton, New York.

One was my first appearance as The Roach, mascot for the Wilton Bombers, at halftime during the first game of the year. I was fifteen, and though I didn’t know it at the time, it was to be the last year I’d attend Wilton High School.

“Sydney Cinnamon,” Mr. Palmer said that morning in his office, “with everything against you, you made yourself into something. You created a self for yourself. You are The Roach, an entity of your own invention, and I admire you for it. I have something along the same order in mind for myself.”

“What are you planning to become?” I asked him.

“I’m not planning to become anything. I’m planning on Palmer Pest Control becoming something. I want to go national, Sydney! I want to be big!” Mr. Palmer looked like an enormous bird, like the kind of huge, skinny, long-beaked bird that swooped down from the sky, poked around in the dirt, and carried away the very creatures Mr. Palmer exterminated for a living.

“Sydney,” he said, rubbing his palms together ecstatically, “I’m negotiating with a Japanese named Hiroyuki for a merger with Twinkle Traps, over in La Belle, New York. Together, Twinkle and Palmer could control the market. I need your help, Sydney.”

He knew he could ask me to do anything. Because of him, I had changed from an orphaned dwarf who picked up odd jobs jumping out of birthday cakes, or working summers at resorts like Leprechaun Village, to a TV personality who earned enough money to finally order clothes made that fit, and furniture my own size.

The commercials I made for P.P.C., as The Roach, were famous in upstate New York. If Mr. Palmer had exaggerated slightly in saying I was on my way to becoming the most famous dwarf in the country, it still did not take away from the fact I had my own little fame wherever I went.

And fame is fame. The big fish in the little pond doesn’t bother its head about larger bodies of water. Thanks to Albert Palmer, I’d gone from entertaining as The Roach at halftime in high school football fields to making commercials and appearing at shopping centers, and starring at openings of everything from bowling alleys to cut-rate liquor stores.

I even had my own theme song, which was “La Cucaracha,” and my own groupies, kids who congregated wherever I appeared, and waved pieces of paper at me that they wanted me to autograph.

“I’ll do anything you say,” I told Mr. Palmer, and he rubbed his bald head and grinned at me, then came around and sat on the front of his desk, facing me.

“The last week in September,” he said, “the Wilton Bombers are playing the La Belle Boots, at La Belle. Sydney, I’d like you to make an appearance at halftime. It’s a way to tell our home team you haven’t forgotten your beginnings, and we’re still in there rooting for them. And it’s a way to show you off in La Belle.”

“And the second part isn’t going to be hard, either. There’s a surprise in it for you, Sydney, one I think you’ll like. She’s your size, Sydney.”

“They call her Little Little La Belle. She’s one of the little people, like you, and she’s the daughter of Larry La Belle. Of course, his family is very prominent in that town, town’s named for them. She’s having her eighteenth birthday party that weekend, and Mr. Hiroyuki would like you to make a little surprise guest appearance at the party. His boy’s a friend of the family, and that’d be his gift to this little girl.”

“You’ll be a surprise for the little lady, and it’ll help me get Hiroyuki in a good mood when we talk merger.”

I said I would and then I began wangling for the very best accommodations while I was in La Belle.

I’d learned to do that from a fellow named Knox Lionel. We’d roomed together in the employees’ dormitory at Leprechaun Village, the summer we both worked there. Knox was seventeen that summer and I was fourteen. He was a combination philosopher and con man, who loved to watch the TV preachers and imitate them. He entertained us in the dorm posing as a preacher called Opportunity Knox, a mixture of all the television preachers he’d studied. He could cry like Jimmy Swaggart. He could fret like Rex Humbard. He could beam like Robert Schuller and shake a pointed finger like Billy Graham. He stood on a box to deliver sermons on sin that had us holding our sides laughing.

But he wasn’t kidding when he preached about sticking up for ourselves.

“When you go on a job,” Knox always said, “make sure your little ass goes first class! You never know how a job’s going to turn out for you. Some jobs you’ll fend off drunks or ladies who want to hold you on their laps or dogs who want to knock you over and lick your face. Make sure ahead of time you’ve got first-class accommodations. If you don’t stick up for yourself, you’ll go from jobs like that back to some fleabag with the head down the hall.”

Everything a dwarf needed to figure out, Knox had figured out. Even though he didn’t have a hump like some of us, and was this miniature marvel of a good-looking guy, he never called himself a midget or a little person.

He’d lecture us that blacks didn’t get anywhere calling themselves “colored” or “Negro”; that all of us were duty bound to call ourselves the worst thing anyone could call us:
dwarf
—“And make it beautiful!” he’d roar.

He was the only dwarf I’d ever met whose mother and father had been dwarfs, too, though I’d heard of a few such cases. There was a dwarf who’d played in a major league baseball game who’d had dwarf parents. He was Edward Gaedel and he’d played one game for the St. Louis Browns in 1951, as a stunt. But the vast majority of us are flukes in our families.

Knox had appeared in an act with his folks in a series of second-rate carnivals, where they were billed as The Inch Family. He was also the only dwarf in Leprechaun Village who’d been earning his living since he could walk, in one form or another of sleazy show business, until both his parents died. He liked to dress all in white, and said it was because of all the years he could never wear white, when he was working carnies in dusty lots, or on the road for weeks with no place to get his clothes cleaned.

Some of them in the dorm didn’t like him; some were fascinated by him; all agreed he had the smarts, and we called him “Opportunity.”

There was a time in Skaneateles, New York, where I’d been sent away from a job on a cold February night because the hostess of the Valentine party hadn’t been told I had a hump. She said there was no way I could play Cupid, since I was supposed to appear practically naked. Anyway, she said, Cupid wasn’t a hunchback. Instead of the hundred dollars I’d been promised, in addition to a hotel room and meals, she gave me a twenty, and said to please leave before the guests arrived.

Later on in my large, comfortable room at The Skaneateles Inn, feasting on filet mignon and watching the snow fall on Skaneateles Lake, I gave silent thanks to Opportunity Knox.

I also learned, from then on, always to mention the hump, though later, as The Roach, that never mattered. I had my plastic shell covering me as I performed.

Mr. Palmer said, “Sydney, you’ll
have
a room with a view, color TV, a separate bath—nothing but the best! You’ll be put up at the Stardust Inn. I’m staying there myself!”

Although I’d never been in La Belle, New York, I knew about the Inn. As a youngster, I’d gone with others from Twin Oaks for an outing at an amusement park on the outskirts of La Belle: Stardust Park.

“Sydney,” he said, getting off his desk, “La Belle has a fine library, too.”

The few times we’d traveled anywhere together, I often had Mr. Palmer leave me at the local library while he took care of business.

I was comfortable in libraries, and reading was my passion.

Once, on a job, when I jumped out of a cold cherry pie at a George Washington’s Birthday bachelor party, the guest of honor and I got talking.

He told me he was a psychologist, and he wanted to question me about my life-style. He was drunk—they always are at bachelor parties—and when he found out how much I read, he leaned into me and suggested, “You’re overcompenshating, Shydney.”

“For being sho short,” he said. “You want to know sho much sho people forget your shize.” Before he fell face down into his plate he added, “You esh-esh-cape that way, too.”

After I became The Roach, I read even more, and then I think I was overcompensating, not for being a dwarf, but for being a high school dropout.

That was something I didn’t thank Opportunity Knox for; it was his example I’d followed. He used to tell us all we needed was to
say
that we’d graduated from high school. “You can fake it!” he’d say. “You can fake anything!”

Once he told me, “We can’t walk to where we’ve got to get, Sydney, because our dear little legs won’t get us there as fast as the competition’s. So we’ve got to jump!”

Mr. Palmer shook my hand. “Sydney, then it’s settled? You’ll make your appearance at halftime, do the guest shot for the little La Belle girl’s party, and I want you to have dinner with Mr. Hiroyuki and me one night. The rest of the time you’re on your own…. Do you still read and watch TV at the same time?”

He laughed and slapped my back, and we started toward the door together.

I remembered something else from my days at Leprechaun Village: a dwarf with bad legs, like mine, whom we called Artoo-Detoo, because he walked like the robot in the old film
Star Wars.

“Imagine thinking back to a time when you were another size!” Artoo-Detoo would exclaim. “Imagine growing out of your clothes—waking up one morning and your wrists have jumped past your shirt sleeves!”

I watched myself in the wall of mirrors at the end of Mr. Palmer’s office. I thought of the time I had visited Stardust Park. I was eleven then. Yet very little about my physical appearance had changed in those six years.

Three foot four and a half, still … the same hump, not bigger, not smaller. Legs too short for my body. My face could pass for normal. Light blue eyes, fair teeth except for one that hung like a fang longer than the others, bucking out from the row, sandy-colored hair, good skin … but the rest of me was like God’d gone mad when He started making me from the neck down.