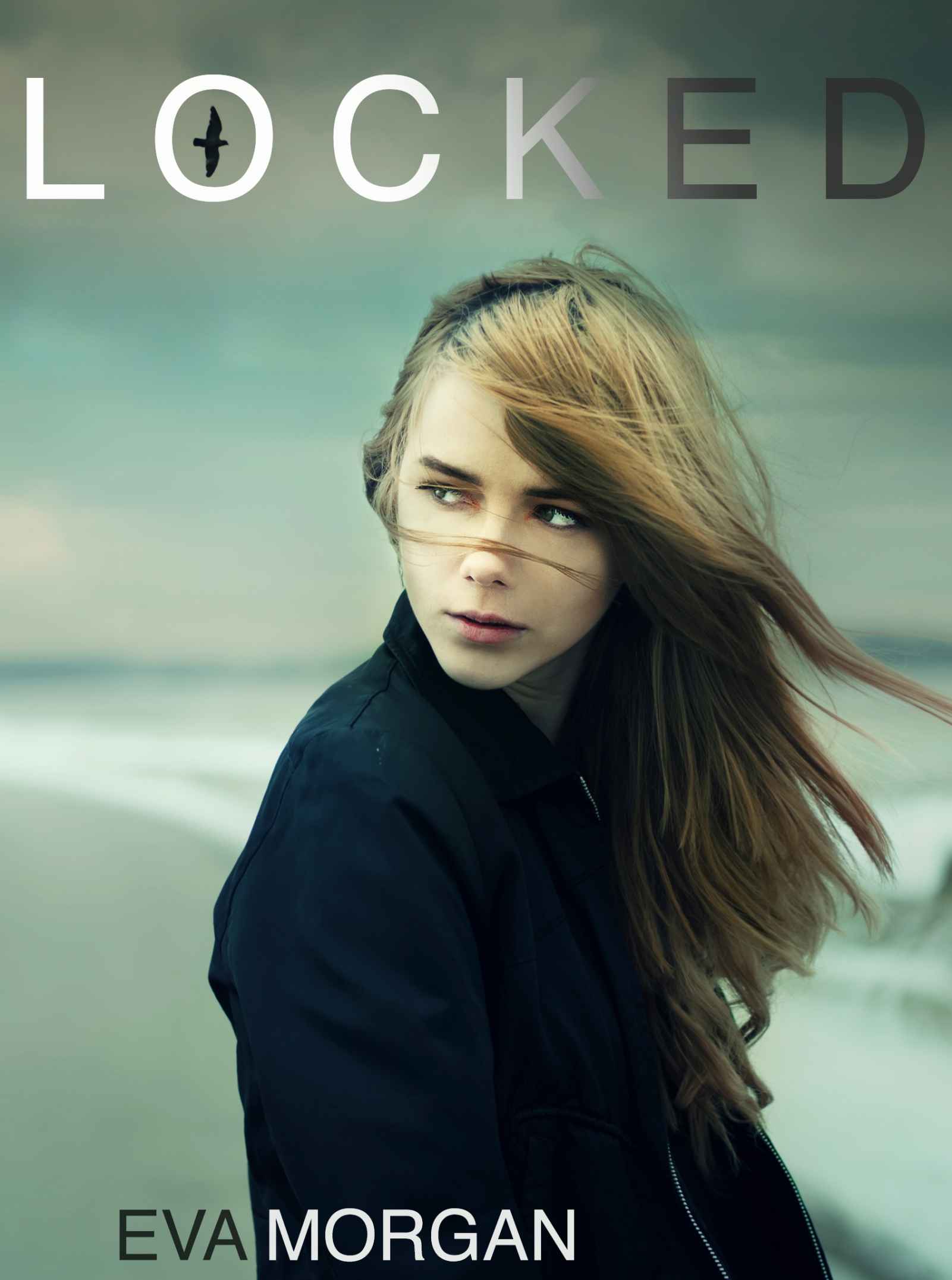 The shooter is by the door. Sherlock and I are against the wall. Too far for me to reach the shooter before he could fire. Too close for a shot to be anything but fatal.

“I thought you said you didn’t care about him.” He’s so cold. The hand holding the gun is unwavering.

“Irene,” Sherlock says quietly. “There’s something I want to tell you.”

I look at him. There’s no fear in his expression. Only acceptance. Only kindness. There’s so much kindness in him as he smiles at me. It burns apart the memory of every scowl, every smirk.

“Hey,” I say to the shooter, through the tears. “It’s my birthday.”

I move just as the noise explodes out of thin air.

A novel by Eva Morgan

Based on the Sherlock Holmes stories by Arthur Conan Doyle

Book 1 of the Locked Series

For the Sherlockians. We’re all in this together.

All rights reserved. This work or any portion thereof may not be utilized or reproduced in any way, with the exception of review purposes, without the written consent of the author.

Use of the Sherlock Holmes characters created by Sir Arthur Conan Doyle in the public domain.

This is a work of fiction. Any resemblances to real persons, living or dead, is unintentional and entirely coincidental.

For questions, concerns, or comments, please contact the author at
[email protected]

“You were supposed to be boring.”

The casserole is burning.

The casserole is burning and the last moving truck is putt-putting away down the road. The new neighbors are probably just beginning to open the tops of boxes, surveying the bathroom and deciding what colors to repaint the walls, and then the bell will ring and I’ll be there with my casserole because that’s the normal thing for a person to do when someone moves in next door.

I rip open the oven, scorching my finger. The casserole’s not too bad. Just a few curls of smoke and a blackened top. I close my eyes. Five minutes later and flames might have engulfed the house. Might have burned me worse than the casserole. If only. Dead people don’t have to play normal with the new neighbors. Or get up in the morning.

There are no bigger detectors of bullshit than eighteen-year-old boys, and whenever I open my mouth it’s nine hundred percent bullshit. Which is fine. Bullshit is better than the real me.

“Irene?” calls Mom from downstairs. Calls, not yells. To her, I’m still one raised voice away from broken glass. “Did you bring the casserole over yet?”

“Going now!” I shout back and then I’m out the door because the things I can’t face are both inside and outside the house. It doesn’t matter which comes first.

It’s a big house, lots of windows, lots of yard space. Towers over the tiny square thing belonging to Mom and I. That house had been empty for ten years. Old owner priced way above market value. Rich neighbors, then, but they’d only had one moving truck.

I ring the doorbell, pick off burnt flakes of cheese, and rehearse.
Want me to show you around the neighborhood? You should come over for dinner some night.
Hopefully they’ll say no to everything. Not enough people say no.

The door opens and my new neighbor is a vampire.

He’s nearly a foot taller than me. Unruly ink-black hair, and a face made of knife angles. If I were obnoxious, I might use the term
shockingly attractive
. Or
terrifyingly handsome
.
Holy mother of balls
would also be an option. His eyes are crystalized, glittering, and they get even more diamondlike when he sees the casserole.

I swallow. “I’m glad you like casserole so much…”

“What? No. No.” He waves at me distractedly and yells into the house, “Casserole, Mycroft! Not potato salad!”

There’s an echoed “damn” from the living room.

“Knew it the moment I saw the garden gnome,” says the vampire to the universe at large before directing his voice back to the living room. “That means I get the upstairs bedroom.”

“Um…sorry.” I always apologize to people when I have no idea what to say. Safest thing to do.

He has a British accent. The girls at Aspen High will lose their minds.

“Wait, no,” I say. “I mean, I wasn’t actually apologizing for anything.”

“I assumed you were apologizing in advance for boring me with the standard introductions, which I would actually prefer to get over with, so: I’m Sherlock Holmes, you’re someone whose last name is Adler, going by the surname on your mailbox. No, I don’t find it a particularly lovely neighborhood. No, you’re not invited inside for tea. Goodbye.”

And the door slams.

I check myself to see whether or not I’ve been hit by a truck, because that’s what it feels like. No truck. Nobody tasing me, either, which was my next guess. I shuffle t
he casserole to my left arm and buzz the doorbell two more times.

The vampire answers it again. No, not vampire. Sherlock. He’s pale like one, though. It makes his eyes even more alarming.

“We’re not big fans of Girl Scout cookies,” he says and tries to shut the door again, but I stick my foot in the way.

“What the hell is your problem?”

Sometimes my anger outpaces my anxiety and later I’ll regret it, but not yet.

The person with easily the weirdest name I’ve ever heard raises an eyebrow. “Did you really want the tea that badly?”

“It’s not laced with arsenic or anything.”

“If it were, that would make you much more interesting than I believe you are.” His eyes

flick up, and I might as well have just slid through an MRI machine.

I should be nice. Sherlock is reading very low on the social skills meter. Someone like him probably doesn’t get a lot of nice. “Okay. So…you’re my age, looks like. My first name is Irene, by the way. Not on the mailbox. You’re transferring to Aspen High, right?”

He does this pained twitch. “I’ll save both of us some time. I don’t do this.” He gestures.

“Not about things that don’t matter, no. We’re not going to be friends, I’m not going to come round your house after school to do homework, if you ask to borrow sugar I won’t give you any. Now goodbye.”

The door bounces off my foot again. At this rate I’ll need crutches. “Yeah, no, I don’t want your sugar. I just thought it would be nice, since we’re neighbors, to get to know each other a little. But obviously—”

“I already know as much about you as I’ll ever need to,” Sherlock cuts in.

I hunt through my mind for the part that keeps my lungs working. My stomach wrenches and I will myself not to throw up, like I did when the car finally settled on its back and I unhooked himself from the seat belt and got a good look at—
no, stop, don’t go there.

“Nice trick. Been talking to my mom? Looked us up online?” The words fall from me like rocks. “You got one thing wrong. It’s not insomnia.”

“Damn.” His face ices over again. “In that case, what keeps you awake at night? I assume you’re not crying over your sister. You two didn’t get on. You were always the favorite. She must have resented that. People do. And you, let’s see…you were ashamed of—”

One moment, Sherlock is loosely holding the casserole. I move and then it’s slathered down his front, clumps of it splattering on the porch, the flakes of burnt cheese dotted across his collarbone. The dish clatters to the ground.

“Oh my God.” The pain is sliding farther and farther back, the scene in front of me getting crisper. “Oh God, I’m sorry—”

There’s surprise in his expression. An expression that’s been so flat that any hint of emotion stands out like white on black. There’s a tiny bit of hurt there too, almost unnoticeable. I want to yell
well what did you expect
, but instead I turn and run.

When I get back to the house, my heart is beating so fast it hurts. I scream into my elbow without making a sound.

“What were they like?” my mom calls from upstairs.

I wanted to say I’m very sorry for throwing the casserole at you. Except it probably was for the best, since it’s the first thing I’ve tried to cook in months and it might have been poisonous anyway, even without the arsenic

I am expressly sorry for dumping the casserole on your shirt. It was rude. Although it’s probably nicer to get a casserole thrown at you instead of your dead sister and I don’t know where you get off looking all sad like that afterwards

I should not have chucked a casserole at you. You probably prefer blood. I’ll remember that next time. Unless you’re an alien (also a possibility) in which case I’ll try to synthesize some space goo or whatever it is you eat because you’re obviously not human

I am so sorry for what I did. It was immature and I don’t know what came over me. I hope you can forgive me. Welcome to the neighborhood.

I crumple all but the last one, sticking it in my pocket. It’s one minute past midnight. Mom’s asleep by now. I’m good to go.

I take a different note out from under my binder. This one I didn’t write.

someone’s breaking into my house every night. no idea who it is. they don’t take anything. they only stay for a couple minutes. I thought I was imagining it, but last night I saw their shadow. my dad sleeps through it and I don’t want to tell him because I had a run in with the police at a party last august and if he calls them and they recognize me, well, yeah. the person usually comes around 12:30. could you find out who it is? maybe take a picture? I’m worried it’s one of my friends playing a prank and I don’t want to call the cops on them. my address is 18 rottleby road. thanks!! you really are amazing.

18 Rottleby Road. A twenty-minute walk. I put on black pants, black shirt, a black beanie and by the time I’m outside in the night air, the chill just beginning to cut the leftover warmth from the sun, I’m awake.

I’m only awake at night.

I’m only awake when I’m distracted.

I walk quickly, circumventing the pools of light cast by streetlamps, but before long I’m thinking about the new neighbor and that ruins everything.

How the hell did he know?

So what does that make him? A stalker? A psychic?

Monday will be interesting. The guys will hate Sherlock, no doubt about it, if he talks to them the same way he talked to me. Will his looks—the Austrian-model cheekbones, the scary-beautiful eyes, the British accent, dear God—outweigh his weirdness? They won’t, not for long. I know my school. Sherlock will start alone, end alone, and be alone in the middle.

But I can’t pity him. Not after what he said.

Then my phone rings.

How could I have forgot to put it on silent? It rings, it shrieks. A dog starts barking and a porch light switches on and if Mom realizes I’ve been sneaking out—

I dive behind a rosebush, scratching my cheek, and hiss “Hello?” into the screen blinking
BLOCKED NUMBER
at me.

Blood of the Reich by William Dietrich
The Plover: A Novel by Brian Doyle
Finding the Love Back by Adina Jan
Fortress of Ephemera: A Gothic Thriller by Eric Christopherson
Seal the Deal (1Night Stand Series) by Kenrick, JoAnne
Stepbrother, Mine #2 by Opal Carew
A Mate for Griffin by Charlene Hartnady
Enna Burning by Shannon Hale
Surrounded by Secrets by Mandy Harbin
Boys for Beginners by Lil Chase