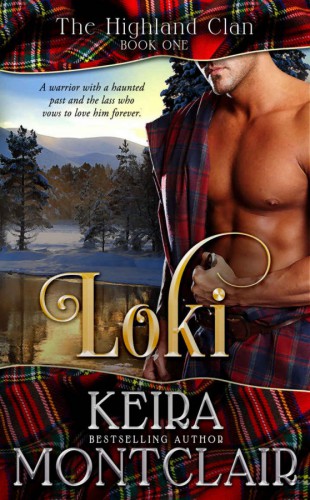 Loki Grant’s first memories are of living in a crate behind an inn in Ayr, struggling to survive. Clan Grant saved him from his lonely existence and took him in as one of their own. But though the Highlands have become his home and he loves his adopted parents, Brodie and Celestina, Loki feels lost. Part of him is still that scrappy wee lad who relied on his wits to survive the streets, and he is not sure he belongs. The feistiest and most beautiful lass in the clan, Arabella, steals his heart, but when her father resists the match because Loki is not of clan blood, Loki decides to confront his past.
He wishes to satisfy Bella’s father by discovering his parentage, but he also hopes his quest will help him understand his purpose.

As far as Arabella is concerned, Loki Grant is the wiliest, brawest, and most handsome warrior in existence. She is determined to have him as her husband regardless of what her father thinks.
So when Loki’s search for his sire leads him into trouble, she rushes headlong after him.

Together, Loki and Arabella must discover the dark secrets of Loki’s origins, for only by confronting the past can they hope for a bright future together.

To all my readers of the Clan Grant Series:

This is for you! You loved the Grant and Ramsay families, so here are the stories of their bairns several years later.

For all new readers to my novels:

This is a stand-alone series that began in Scotland about twenty years after the Clan Grant series.

Hope you all enjoy!

From THE BRIGHTEST STAR IN THE HIGHLANDS

Loki Grant knew he would never be good enough.

What a fool he’d been to think Jennie Grant would ever be interested in him. He stood on the periphery of the great hall of the Clan Grant keep after the ceremony in which he’d been given a special crest by Aedan Cameron for saving his new wife, Jennie Grant.

Jennie, the lass Loki had thought he loved, stood not far from him, laughing next to her husband, their love apparent to anyone who glanced their way. The Cameron chieftain was a proper match for someone as fair and kind and wise as Jennie. Loki, of course, was not. He had spent much of his early life tucked inside an old crate in the royal burgh, begging for scraps of food, running the many paths of Ayr to work for coin, doing anything to keep from going hungry. But then God had sent him Brodie and Celestina Grant, who had brought him to the Highlands and adopted him as their son.

That had been the best day of Loki’s life. He’d finally felt a sense of belonging. With time, he’d fallen for the brown-haired, brown-eyed lass standing in front of him.

But he’d known all along his feelings for Jennie were wrong. She was too old for him, and besides, she was his adopted aunt, the baby sister of his adopted sire, Brodie Grant, and Laird Alexander Grant, the best swordsman in the land. How could he have ever imagined a match between them was possible?

Because he’d always been a dreamer. Otherwise, how would he have ever survived living outdoors with the rats and other critters of the world, fending for himself at the tender age of six summers?

Now he understood. Jennie was his aunt, and that relationship would last a lifetime. He was young, and someday, he’d find another lass to wed. He walked over to her once her husband moved to talk to another, feeling the need to explain himself so she wouldn’t think too poorly of him.

He struggled for words, but finally said, “I want you to know… I want to say…you were correct before. I did have feelings for you, but no longer. Well, now I have different feelings. I realize our ties as family are much more important, and I also want you to know that I followed you because you are like my sister, not for any other reason.” He had saved her from a man intent on killing her. It was one of the best things he had ever done.

Jennie smiled. “I know. We are family, Loki.”

“I like the Cameron. I will miss you, but I think you chose well, and I wish you much happiness.”

She hugged him and said, “My thanks.”

Directly behind him, three young lassies about his age stood gazing at him. Jennie took a step back, giving him a clear view of the girls. Loki scowled a little, puzzled by their attention.

The first lass said, “Loki, you are such a strong guard.”

The second lass said, “Loki, you are so handsome.”

The third lass, a girl with reddish-gold curls and a spattering of freckles across her nose, stepped up to him, took a deep breath, and declared, “Loki Grant, you are the handsomest, most braw warrior I have ever seen. Someday, I’m going to marry you.” She leaned toward him, closed her eyes, and pressed her lips against his.

Her lips were warm and soft, and she smelled nice, different from any other lass.

When she ended the kiss, she whispered, “My name is Arabella, and I promise to love you forever.” She twirled around and ran away.

Loki turned to look at Jennie, blushing a deep red.

Loki couldn’t help but grin. He’d never met Arabella before, but she liked him, she really liked
him
, Loki Grant—a lad who’d lived in a crate under the stars for longer than he cared to remember. She had a smile on her face that made him feel extra special, as if he were the only one that mattered in the world.

He nodded to Jennie standing next to him.

Arabella would be his, forever.