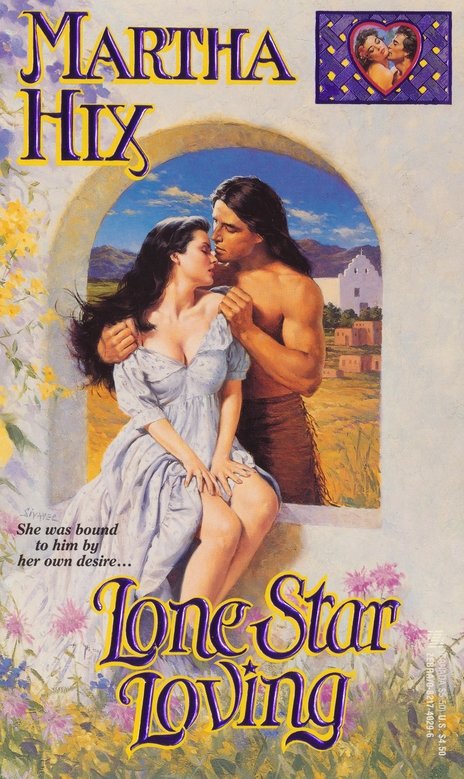 The shining splendor of our Zebra Lovegram logo on the cover of this book reflects the glittering excellence of the story inside. Look for the Zebra Lovegram whenever you buy a historical romance. It's a trademark that guarantees the very best in quality and reading entertainment.
Â
PRAISE FOR MARTHA HIX!
“All the emotions you can imagine plus a good dose of earthy sexuality make this spectacular reading.”
â
Rendezvous
of CARESS OF FIRE
“Martha Hix always shows her talent for writing Westerns, and CARESS OF FIRE is no exception. I look forward to the rest of the McLoughlin Clan series.”
âInside Romance
HUNGRY FOR LOVE
“I told youâdon't look at me that way,” Charity demanded, pulling at her handcuffs. “I'm not some entrÃ©e at a starving man's feast.”
“Perhaps you'd like to think you're not,” said Hawk. He blew at the steaming spoonful of stew, then offered it to Charity. “You see, I am also a person of powerful hungers.”
“Tell me, Hawk. Are you planning to have your way with me before you try to extort money from my family?”
“Eat your stew.”
But the moment he placed the spoon at her lips, she turned. The motion sent his arm on a downward path. The spoon fell to the pillow and Hawk's hand landed on her breast.
Charity clasped the bed rails and Hawk watched as a conflict of emotions stormed across her face. He murmured her name as if in a chant.
“You
are
going to have your way with me,” she whispered.
“Don't you want me to?” He moved closer. Her lips parted. He knew it was to make some scathing remark, but his mouth descended on her first. She tasted sweet.
Wah'Kon-Tah!
His hunger surprised him. Always he'd gotten a thrill from bringing down wild beasts. This woman was the wildest and most beautiful of them all, and he meant to send the bow of lust straight into her.
THE FIERY PASSION, EARTHY SENSUALITY,
AND THRILLING ADVENTURES OF
THE MCLOUGHLIN CLAN
CONTINUE IN THESE OTHER MARTHA HIX
TITLES, PUBLISHED BY ZEBRA BOOKS:
Now Available:
BOOK I, CARESS OF FIRE
by Martha Hix
Lisette Keller was determined to leave Texas and pursue her dream of opening a millenery shop in Chicagoâbut first she had to find a way to get there. If she could persuade handsome rancher Gil McLoughlin to hire her as a cook on his cattle drive to Abilene, she'd be well on her way. To Gil, a cattle drive was no place for any woman. But the headstrong rancher was soon not only agreeing to take her on as cook, but also vowing to take her in his powerful embrace. The long hard Chisholm Trail lay ahead, with many a starry night beneath the Texas sky, and Gil meant to savor Lisette's sensuous beauty and velvety kisses . . . all the way to Kansas!
Â
Coming in August 1993:
BOOK III, WILD SIERRA ROGUE
by Martha Hix
Sparks flew when the dark and devilish Rafe Delgado teamed with prim short-tempered Margaret McLoughlin, triplet daughter of Lisette and Gil, on an expedition into Mexico's dangerous, bandit-filled Copper Canyon. Margaret was determined to see her mother safely retrieved from Mexico and brought back to the states, even if she did have to spend time with the infuriating rake, whose only dubious virtue was carnal charisma. Rake knew Margaret disapproved of his roguish ways, but he still meant to have her in his bed. The problem was, Rafe had always been able to love 'em and leave 'em before, and now, after sampling Margaret's sweet offerings, he wanted to claim her as his alone forever.
MARTHA HIX
Lone Star Loving