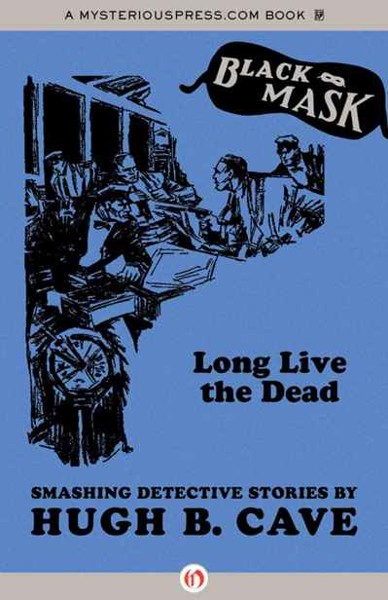 Dedicated to my readers for the

SMOKE GETS IN YOUR EYES

CHAPTER ONE: A MATTER OF MORALS

CHAPTER FOUR: BACK ON THE FRONT PAGE

Introduction
Hugh B. Cave on His Ninetieth Birthday

—The invention of the terse narrative sentence pioneered in the 1920s, according to Gertrude Stein, not by Hemingway, but by Dashiell Hammett in
Black Mask.

—The explosion of the pulp magazine, and the invention of all the pulp genres and sub-genres that have become staples in every medium of popular entertainment—from radio, television and movies to computer games, and web sites.

—The demise of the pulps and the reign of the slick magazines for short fiction starting in the 1940s.

—The invention of the paperback format, and the original paperback novel, which encouraged a move from short fiction to novels in the 1950s.

—The growth of formalized international publishing and film conventions in the 1960s and 1970s, which encouraged foreign sales and the export of American popular culture.

—The rise in the late 1970s and 1980s of a new mass market of fandom, with well-organized conventions, and specialized genre societies, and the creation of new genre writing awards.

—And finally in the late 1990s, the growth of the World Wide Web and cyber publishing, and web magazines, and sites devoted to single authors.

Hugh B. Cave was there from the beginning, and at ninety years old (July 11, 2000) his career is still in full swing. Two new novels by Hugh Cave are about to be released,
The Dawning
and
The Evil Returns: Mindstealer
(Leisure Books, 2000) as are a number of story collections, including
Bottled in Blonde
, the Peter Kane stories from
Dime Detective
(Fedogan and Bremer, 2000) and
The Lady Wore Black and Other Cat Tails
(Ash-Tree Press, 2000). New websites have sections devoted to him (vintagelibrary.com). Mr. Cave will participate in cyber publishing on the new
Black Mask Magazine
website. In addition, awards for individual stories, story collections and many other international honors of recognition for Mr. Cave’s extraordinary career keep coming along, including Lifetime Achievement awards from the International Horror Guild, the Horror Writers Association, and the World Fantasy Association.

I want to bring to the attention of the reader the breadth and scope of Mr. Cave’s achievement. He has published thirty-seven books, many of them novels, between 1942 and 2000, with three or four currently in the hopper. His collection
Murgunstrumm and Others
(Carcosa, 1977) won the World Fantasy Award as Best Collection. The volume is also listed in Jones and Newman
Horror: 100 Best Books. A Summer Romance & Other Stories
, a collection of Mr. Cave’s romance stories published in
Good Housekeeping Magazine
, was published by Long-man in England and reissued in Japan by Eichosha-Longman in their Simplified English Series where it is used for teaching English in schools—and is in its twelfth printing in Japan.

From the earliest pulp days, Hugh B. Cave’s stories were of a quality to be reprinted and reprinted again in magazines in thirty-five countries, in anthologies, and in school books. Several have been adapted for radio and television. One
American Magazine
short story, “Two Were Left,” has been reprinted in school books, worldwide, more than one hundred times.

I can think of no other American author who has been so prolific in so many different fields. Many popular and extremely prolific authors worked primarily in one genre: for example, Frederick Faust (Max Brand) in Westerns, and Erle Stanley Gardner in mysteries. Other prolific pulpsters like Frank Gruber, who wrote for a wide variety of markets, and made the transition to novels, do not approach the longevity, the consistency, the scope, the breadth, the variety, and the reprintability of Mr. Cave’s story-writing achievement.

The preeminently American style of detective story, the hardboiled private-eye tale, was a creation of one of the greatest of all pulp magazines,
Black Mask. Black Mask
published 340 issues under six editors from 1920 to 1951. Two of the editors were women. At least thirty-one published writers were women, too. To put Hugh B. Cave’s
Black Mask
achievement in perspective, more than 2,500 stories appeared in the magazine over thirty-one years. William F. Nolan, hard-boiled historian and editor of
The Black Mask Boys
(Mysterious Press, 1985), estimates that
Black Mask
printed thirty million words during those thirty-one years. Hugh B. Cave is not associated by scholars and critics with the classic “Black Mask Boys” like Dashiell Hammett, Raymond Chandler, Frederick Nebel, Raoul Whitfield, Carroll John Daly, Horace McCoy, Paul Cain, and Erle Stanley Gardner. However, Hugh Cave is among only a dozen or so
Black Mask
authors (out of total 640 contributors) to have stories accepted by all of the magazine’s last three editors: Captain Joseph T. Shaw, Fanny Ellsworth, and Kenneth S. White. In the famous group of contributors listed above, only Erle Stanley Gardner and Carroll John Daly can make that same claim of continuous appearances. Mr. Cave is also among a very select group of authors to have more than one story published in a single issue of
Black Mask.
Only Raoul Whitfield appeared regularly with a second story in
Black Mask
, featuring his popular series character Jo Gar. These stories and novels of intrigue in the Philippines were published under Whitfield’s famous pseudonym, Ramon DeColta.

Few writers’ careers in
Black Mask
span the major transitions that took place in the magazine during the tenure of its last three editors from 1934 to 1941 and later. Of particular impact was the broiling international scene prior and during World War II. Hugh B. Cave integrated this wartime background into his fiction in a more subtle and satisfying manner than most pulp writers of the 1940s did. Many wartime pulp stories now feel dated, jingoistic, or melodramatic. Cave’s tales of this period, particularly “Lost—and Found,” use international intrigue unobtrusively as an integral, secondary element to a satisfying reading experience. These
Black Mask
stories, written by Cave in the late 1930s and early 1940s, remain as fresh today as they were when first published.

Doug Greene (who with his wife, Sandi, is Crippen & Landru’s publisher) and I are honored to have worked closely with Hugh B. Cave on the production of this book. Hugh answered our questions, provided frank, revealing evaluations of each of the tales, wrote his own brief prefaces to each story, and freely shared reminiscences of his pulp writing days. In addition, Hugh B. Cave provided meticulous records, now stored on computer disks, that span the breadth and depth of his extraordinary writing career. The interview that follows, and the appended checklists, statistics, and bibliographic materials that augment this collection of
Black Mask
stories, derive almost exclusively from Hugh’s own detailed files. Despite his considerable achievements within the pages of
Black Mask
, however, Hugh B. Cave is such a widely versatile and endlessly entertaining writer that the full range of his talent and his astonishing staying power are more interesting and significant than even his impressive
Black Mask
accomplishments, and the interview touches on many aspects of his career.

This collection is offered as a small tribute to the great career of an extraordinary writer, active as ever, and still at the peak of his form as he celebrates his ninetieth birthday.

THE
BLACK MASK
INTERVIEW
HUGH B. CAVE
“You Learn to Write by Reading.”

H
ugh Barnett Cave was born in England on July 11, 1910, but he grew up in and around Boston, Massachusetts. The
Boston Globe
published his first story in 1925 when Hugh was a fifteen-year-old student at Brookline High School. “I wasn’t paid for it,” Hugh makes sure to set the record straight. The story was called “Retribution” and it won an Honorable Mention in the All High School Short Story Competition. “But I did sell one or two stories while still in High School to a Sunday-school paper published (I think) by the D.C. Cook Co. I do remember a letter I got from the company, saying the story was much too long for them but they would use it as a serial, and please would I double-space the next story I sent them!”

Of course, Hugh had been writing stories long before he became a published author, and he made up tales to amuse himself long before that. But in his opinion, the most important aid to his development as a writer was the avid reading of exciting, classic novels and great short stories he did when a youngster. From the very beginning of our correspondence and telephone conversations, I wanted to know what Hugh’s earliest pulp-fiction stories were like. I had a comprehensive list of the titles, and suspected that Hugh was immediately drawn to the genres of horror and fantasy. I asked. He answered. No, he was not drawn immediately to horror!

Amnesia by Rick Simnitt
Beneath the Lion's Gaze by Maaza Mengiste
Corazón de Tinta by Cornelia Funke
Xylophone by Snow, K.Z.
Heriot by Margaret Mahy
Dangerous Therapy: O'Connor Brothers (Volume 1) by Rhonda Brewer
The Look by Sophia Bennett
Assassin by Lady Grace Cavendish
Passing On by Penelope Lively
A Day in the Life of a Smiling Woman by Margaret Drabble