Authors: To Capture a Rake 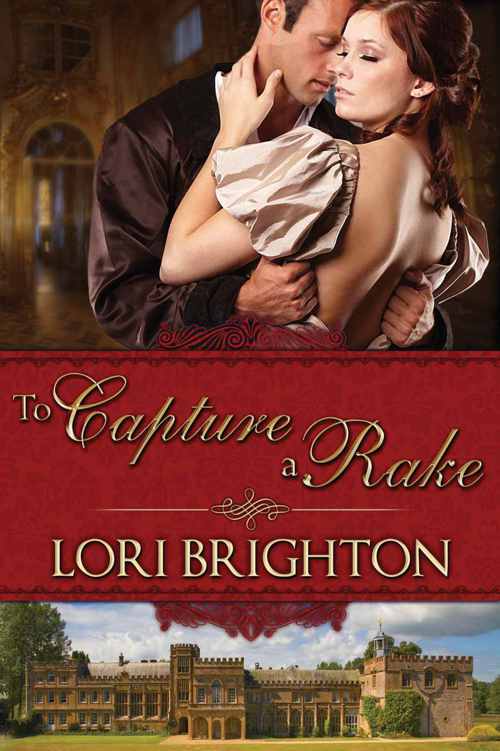 All rights reserved.
No part of this book may be reproduced, or stored in a retrieval system, or transmitted in any form or by any means, electronic, mechanical, photocopying, recording, or otherwise, without express written permission of the publisher.

The buzzard was preparing to feast.

He ruffled his dark feathers with an eagerness only one half-starved could muster, clawed at the dirt with sharp talons, and snapped his beak together like a man smacking his lips. He’d found a treasure, and nothing would keep him from the carcass. Not even a quickly rolling carriage. Oh, he jumped to the side, wobbling back and forth in that birdlike way, but he’d stood his ground, merely glaring up at them.

While most women would avert their eyes, gasp in dismay, or pretend not to notice the disgusting scene, Elizabeth had found herself fascinated by the rotting carcass. As the carriage swept by, she craned her neck, brushing aside the curtains to get a better look. A mutilated blob of pink flesh, white bone, and bits of gray fur. A rabbit then? Gone before it had properly thrived.

“Ghastly sight. I do beg your pardon,” Mr. Smith said, handing her a sandalwood-scented linen. As if the murder of a helpless bunny was his doing.

He snapped the curtains closed, the remains too horrifying for a woman of her breeding, when he knew very well where she’d come from. Wryly amused, she lifted the linen to her nose and sniffed merely to appease him. But the pungent scent of death could not be covered by a curtain or tiny squared handkerchief. She could feel it pulsing in the very air.

Consumed with doubt, she sank back into the worn seat. She wasn’t sure why the scene fascinated her so. Why it called for her to turn. Why that hungry buzzard made her shiver with unease. Perhaps it reminded her only too well of what her life had become. Would she end up like that hare?

Mr. Smith leaned forward, his elbows on his knees, his intense amber gaze on her. “I must ask once more…”

Elizabeth sighed, exasperated with the man.

“I have no other choice.” She returned his linen.

As he reached for the handkerchief, she couldn’t help but notice his smooth movements. He reminded her of a street performer or acrobat. There was strength in his lean body, a strength he contained well, hidden behind a façade of elegance. Who was the true Mr. Smith?

She’d probably never know, and that was fine by her. Solicitor, lawyer, accountant, spy, Mr. Smith was one of many, yet another person of mystery who worked in her household. If he wished to keep his secrets to himself, well, he wasn’t the only one in her life to do so. The fact was that he was invaluable and she would not have survived Mr. Ashton’s death without him.

“What would you have me do?” she asked impatiently, for they’d had the conversation so many times she could repeat his next words. “Ignore my husband’s wishes, God rest his soul? Claim the money for myself and flee the country? Flee the…buzzards
and do exactly the opposite of what Mr. Ashton wished?”

As much as she was loath to admit it, the thought had crossed her mind. But no, unfortunately her new life had come with a new conscience. Lord, even now she could practically feel Mr. Ashton watching her from the heavens above.

“Oh shut up, Mr. Ashton,” she muttered, glaring at the roof of the carriage.

“Nothing.” She sighed, shaking her head over her own silliness. The straw bonnet she wore tipped precariously to the side. Now she was hearing voices? She pushed her bonnet back into place. Mad, she’d gone bloody mad. As impossible as it sometimes seemed, she would see Mr. Ashton’s wishes fulfilled. Thanks to Mr. Smith’s assistance. Mr. Smith, who had spent the last month attempting to talk her out of such nonsense. He was practical, of course, because he was a man. Silly, silly men.

“The law would protect you.”

She waved her hand through the air, dismissing his ridiculous comment. And because he was a man, he forgot that the law looked unfavorably upon women, especially women who had clawed their way up the social ladder, outside of their rank. It didn’t matter how elegantly she spoke, it didn’t matter how expensive her clothing…they all knew she did not truly belong to the
ton.
They could sense it, like predators sensing prey.

“Oh yes, the law will protect me. Until they uncover the truth. Until they twist reality to get what they want. You know as well as I that women have very little control over their lives and circumstances. I must be extremely careful. Tis not merely my future at stake, Mr. Smith, but the children as well.”

He frowned because he knew she had won. Elizabeth hid her grin. Obviously flustered, he picked up his brown gloves from the
fine leather seat, focusing on the mundane task. When she’d first met him, a scrawny man full of mistrust, she’d noticed his hands first and foremost. Elegance amongst the poverty. Now to look at Mr. Smith one wouldn’t have a clue that Mr. Ashton had found him in the gaols of York awaiting the noose.

“And you think he, this
man,
will do any better in the courts?”

She smoothed down the skirts of her dark blue gingham gown. She’d worn a common day dress, hoping to blend in as much as one could in a den of sin. “I pray it won’t come to that.”

He sighed, pulling on his gloves with jerky, frustrated movements.

“Do cheer up, Mr. Smith. He and I will both settle into future bliss, and all shall be well, you’ll see.”

She could tell the man was trying very, very hard not to roll his eyes at her naïveté. The realization almost made her laugh out loud, and it had been so long since she’d truly laughed. But dear Mr. Smith was a decent chap, his dry humor and rational mind always good for a chuckle, and she’d seen so little of him since Mr. Ashton had died.

The carriage slowed as it rolled through massive iron gates that would certainly impress the neighboring countryside. Elizabeth leaned forward and pulled back the curtain once more. From where she sat, she could see the west wing of the home. No, not a home, an
estate
.

Mr. Smith nodded wisely. “The woman is quite prosperous. Amazing what people will pay for.”

She let the curtain fall back into place, too nervous to look further. Although the day was pleasant, she felt overly warm. “Gads, Mr. Smith, are you saying tis well and good for a man to pay for his jollies, but not for a woman?”

He flushed, and she couldn’t help but laugh out loud this time. How good it was to be herself in front of him. But not just him,
Mr. Ashton as well. He hadn’t minded her lower-class accent. Had laughed himself when lying upon his sickbed the night of his death. He’d been a good, good man, but he’d had this one demon hanging over his head. She would right his wrong, if it were the last thing she did. She owed him, after all; he had saved her life.

“What is that smell?” she questioned. At some point the scent of rotting carcass had given way to the strong scent of…

Mr. Smith’s eyes sparkled with amusement. “Oh, but it is.”

Blimey, what had she gotten herself into?

The carriage drew to a stop, and Mr. Smith looked at her expectantly. “We’ve arrived.”

“Indeed.” Elizabeth took in a deep breath, pulled the netting that hung from the rim of her bonnet over her face, and knocked on the roof. Nothing happened. She resisted the urge to sigh. “Poor lad must not have heard me.”

When the door remained firmly closed, Mr. Smith cursed under his breath. “Did I not tell you it was a bad idea to bring the lad?”

“Now, Mr. Smith, do not judge when you know very well we don’t exactly belong in this luxurious lifestyle either.”

“At least we have the decency to act as if we do.”

The door tore open, and Will stood there smiling his toothy grin. “Hullo.”

Mr. Smith reached out and slapped the boy’s cap with so much force it twisted sideways upon the lad’s head. Will stumbled back, frowning. “Awww, why’d ye do that?”

“Because,” Mr. Smith said, stepping from the carriage with an elegant ease and smoothing an imaginary wrinkle from his dark green jacket, “you’re a footman, you do not greet a lady in such a familiar manner.”

“Don’t worry, Mr. Smith,” Elizabeth said, trying not to smile as she stepped from her perch with the man’s assistance. She’d found poor Will in the rookery at St. Giles years ago, and he’d been all too eager to be a footman for a few pence. She hadn’t dared bring anyone but Mr. Smith and Will for fear that her secret would escape and travel across England as quickly as the new trains. Even her driver was newly and temporarily hired. “He’s done no harm. All’s well.”

Will threw a glare over his narrow shoulder as he swung back up next to the driver. Will and Mr. Smith fought like brothers.

Elizabeth slid her arm through his and threw Will a wink that had him smiling once more. Trust was of the utmost importance. There were lives at stake. But she knew without doubt she could trust Mr. Smith and Will.

“Quite the ancestral home.” Mr. Smith was studying the building with a shrewd eye, most likely wondering how much it was worth. “They say she bought it from a ruined earl. Nearly did him in when he realized that she’d turned the place into a seedy den.”

“Seedy den?” This was no seedy den, for she’d seen plenty when she’d lived in London. This was a massive three-story estate fit for a queen, or at the least, an earl. Elizabeth felt a decidedly wicked thrill at the thought of a stodgy earl fainting like some debutante in a too-tight dress. How Mr. Ashton would have adored that story.

She started across the drive, the heels on her boots teetering over the gravel. Place her with the cutthroats of London and she’d have them eating out of her gloved hands. But here…in this place of splendor, she was more than uneasy. It didn’t matter that she’d lived in Mr. Ashton’s estate for four years now, she still felt anxious around money.

The Line That Binds Series Box Set by J. M. Miller
Physical Therapy by Aysel Quinn
Divided Loyalties-epub by Lia Davis
Beneath a Midnight Moon by Amanda Ashley
Ancient Magic: a New Adult Urban Fantasy (Dragon's Gift: The Huntress Book 1) by Linsey Hall
Death Too Soon by Celeste Walker
At His Desire: The Billionaire's Beck and Call, Part 7 by Delilah Fawkes
Family (Insanity Book 7) by Cameron Jace
Secrets at Court by Blythe Gifford
Chasing the Flame: Sergio Vieira de Mello and the Fight to Save the World by Samantha Power