Read Losing Myself in You Online

Losing Myself in You 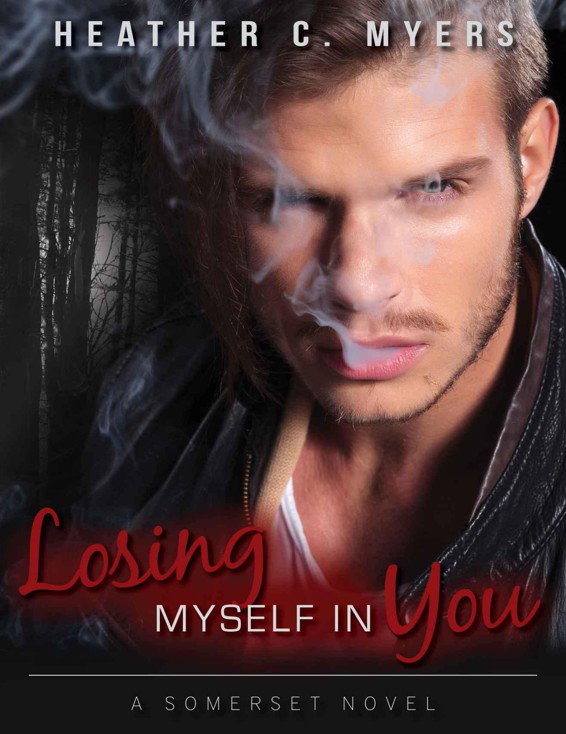 Losing Myself in You

For going on a new mission that involved one of the biggest werewolf packs in all of Somerset, Bridgette Barker was remarkably calm.  Currently, she sat in the back of a black Ferrari, driven by one
of their associates, Kendall Menton, her ice-blue eyes glancing out the window as he briefed her on what this particular mission entailed.  Apparently, members high up in ranking in the Sterling pack were accused of embezzlement of various businesses they were associated with, as well as turning humans into werewolves without their consent.

Bridgette worked for the NDS – Nocturnal Defense Society – a government agency that regulated equal treatment among humans, werewolves, and vampires.  She loved her job, especially when she brought someone – regardless of who that was and what race they were from – to justice.

“The target is Marcus Sterling,” Clive Shereen, another associate sitting next to her in the back, continued, causing Bridgette to rip her eyes away from the scenery that encased the outskirts of Somerset.  The trees cast unforgiving shadows in the darkness, and not even the glow from the moon could ease them up.

“The Alpha?” she asked, furrowing her brow together.

Clive gave her a mischievous grin.  “Ah, I see you are paying attention, my love,” he chided in what was supposed to be a charming English accent.  It was rich and clear, like a church bell or a car alarm.

“Cut the crap,
Shereen,” she said, in no mood for his flirting.  “I didn’t realize Sterling himself was up on these charges.”

Clive flipped through the sheets of paper in the manila folder currently residing in his lap.  He glanced over at Bridgette from his seat in the back and nodded his head, handing her a picture of the wolf in question.

“Apparently, he’s the one giving the orders,” Kendall said.

Bridgette reached over to the compartment embedded in the driver’s seat, and pulled down a lever that caused a flat tool case to spring down.  In it, there were various tools and contraptions, including a hammer, screwdriver, anything one might need to fix something when
they were in a bind.  Clive liked to work with his hands – in more ways than one, he would keep saying with a wink – and always kept at least three different kits somewhere in his car.  He had the seats especially designed for this purpose.  To Bridgette, it came off as rather flamboyant, but every now and then, like tonight, it came in handy.  She grabbed a mini-flashlight and clicked it on so she could see the photos more closely.  Tugging on her bottom lip, her eyes took in the target.  On the bottom of the photo, a name was scrawled in Kendall's swirly handwriting: Marcus Sterling.  He stood in front of his grandiose manor, his hands clenched into fists at his side, as though he was trying to control his anger.   He appeared tall, probably a couple of inches past six feet, and he had incredibly broad shoulders. In fact, he was really strong, or, at least, looked as such.  He had thick, chestnut brown hair that was styled sort of like Elvis Presley's hair, except it was messier and lacked gel. His sideburns actually crawled down the side of his face until they reached the beginnings of his chin, where a deep imprint rested. His lips were thin, pulled into a scowl, and his nostrils were flared as his hazel eyes narrowed at something off screen.

What was he looking at
? she silently wondered, twirling the end of her ponytail around her index finger.

He was wearing what appeared to be a white wife beater underneath a leather jacket with two thick yellow racing stripes heading horizontally across it. Over the wife beater and under the jacket was a brown vest, fitting snuggly on his broad frame. Jeans occupied the lower half of him, while a brown belt wrapped around his waist and interlocked with a golden belt buckle resembling those that were worn by cowboys from the eighteen hundreds. And finally, on his feet, looked to be
very worn brown boots.

He looked… like a beast, Bridgette finally realized. Even though he was in the forest like any lumberjack might have been
, it was easy to tell what his true origins were.  He looked wolfish, ready to pounce at the photographer.  He must not like taking pictures.

Bridgette flipped to the next picture.  This one was older, taken from a different time.  The edges were turning yellow, and the corners were bent.  The picture was of a family painting, probably still in the Sterling family today.  Like vampires, werewolves were immortal.  However, a shot to the heart with a silver bullet would kill them instantly.  It wasn’t uncommon to find members of a pack who have lived in Somerset, since the town was founded in the early
eighteenth century.  Judging by this photograph of a painting, Bridgette deduced that the Sterling family took shape around the same time as Somerset itself.

The painting was of four people – a husband, a wife, and two boys.  Bridgette could easily deduce who Marcus was, thanks to his unruly hair and the perpetual scowl on his face.  Next to him, a few inches shorter, was another boy, with auburn hair and clear, blue eyes.  Unlike Marcus, he looked much more formal, with an ability to hold himself like he belonged to a royal family.  And, being born into an Alpha family, he really was.  His shoulders were rolled back, his chin was tilted up, and he was looking the artist dead in the eye.  Bridgette had to refrain from flinching.

“His family?” she asked, looking over at Clive.

He nodded, though his black hair still somehow refrained from falling in his face.
“His brother, Gerard Sterling.  The Beta.”

“He left the pack at least seven years ago,” Kendall responded from the driver’s seat.  “Rumor has it that he didn’t like being second to his brother.”

“Why?  I thought that was wolf tradition, and all wolves respected it.”

“There has always been sibling rivalry between the two,” Clive said, taking the picture from Bridgette’s hand so he could look at it himself.  He let his fingertips brush her skin as he did so.  “They both fought in wars together, beginning with the American Revolution.  Gerard always outranked Marcus.”

“Just not where it mattered,” Bridgette guessed.

“Exactly.”  He handed the picture back to her.  “So he left on some mission of his own.  No one really knows why, but to answer your question, no, he’s not thought to be involved.”

“The only thing we know of him is that he’s very pro-wolf,” Kendall said, pushing the brakes gently to make a left turn down a dirt path.  “We have pictures of him at rallies promoting
werewolfism as the
right
species, the one other species should aspire to be.”

“Good thing he’s not around, then,” Bridgette murmured.

“Parents?”
She turned to look at Clive.

“Killed by a hunter about a hundred years ago,” he explained.  “The guy thought he could make money on the mother’s fur – they were both wolves at the time – and killed her instantly with a silver bullet.  Father attacked him, got him pretty good, until the guy killed him too.”

Bridgette pressed her lips into a thin line.  The story almost reminded her of how her mother died.  A vampire had drained her when she was out shopping for groceries.  Bridgette had been eleven.  He just took her without asking, and then left her body there for everyone to see.  It was why she was so intent to be an NDS agent.  To extract justice in a world where vampires and werewolves roamed the earth, where humans weren’t at the top of the food chain anymore.  She wasn’t looking for revenge, per se, but she wanted to ensure such a thing was never allowed to happen again with repercussion.  The vamp had never been caught, either.

Bridgette was still bitter about it.

“We also want a Ryan Carlyle and a Brandon Simon,” Clive continued as he handed Bridgette more pictures.  “They’re the ringleaders of the embezzlement.  There’s a list of their various cohorts, too, but Carlyle, Simon, and Sterling are who we want.”

Bridgette nodded her head as her eyes skimmed the text, took in the information,
processed it.  Clive continued to talk, but Bridgette’s mind was already planning the attack.  Her eyes went back to the window.  It was too dark to make out the forestry, which was a shame because it really was beautiful, especially in the winter covered in snow.  It was Bridgette’s favorite place to be, because the city tended to get overwhelming at times.  Now, it was intimidating, foreboding, warning Bridgette away from their intended destination.  Why, she couldn’t be sure.  She had always been a top agent, and wasn’t easily frightened.  But something about this mission in particular had her senses on high alert, like something life-altering was about to take place.

"We're here," Kendall announced in her usual, soft-spoken voice. She turned around to glance at Bridgette, her grey eyes pooling with concern. "Are you sure you're going to be all right, Bridge? This isn't some wolf, this is
the
Marcua Sterling."

If it had been anyone else voicing their concern, Bridgette would have been offended. But Kendall was her friend and was just looking out for her well-being.

"I'll be fine, Kendall," Bridgette assured her. "I'll have the team with me. I'll be okay."  She flashed a confident grin and Kendall seemed to relax a bit.

With that, she and Clive exited the car, leaving Kendall alone in the vehicle. Kendall was a driver, a transporter. She didn't exactly fight, but she provided transportation to and from a destination. She was the fastest driver Bridgette knew, and she trusted Kendall immensely.  Bridgette watched as Kendall drove away until the black car blended itself in with its environment.

When she was gone, Bridgette surveyed the square mansion with sharp eyes from her position.  She and Clive were still a ways away from the manor, but she knew the other two members of their team were already in position on the opposite side, doing their own sweep of the grounds.  It was necessary to do as much intel as possible before making their presence known, especially since werewolves had heightened senses.  She could hear someone stepping on tree branches as they circled the property – a guard no doubt.  And a lone owl pierced the night with its melancholy cry.  There were no trees directly surrounding the place, which allowed the moon to hang low and cast its light on the manor.  It was spooky, Bridgette realized, and a shiver slid down her spine.

The manor was white with three stories. Thick pillars surrounded a wooden porch, and Bridgette noticed that every single window was closed. She cocked her head to the side, looking for any kind of entrance besides the door. If her mother was still alive, she probably would have reprimanded Bridgette for not fully appreciating the architecture of the house. If she had to guess, it was built in the early eighteen hundreds, maybe even earlier.