Read Love Is a Secret Online

Love Is a Secret 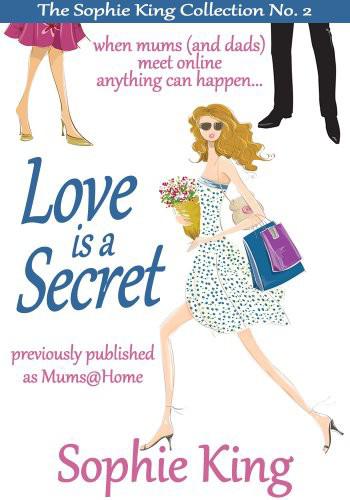 Love is a Secret

Sophie King has asserted her right to be identified as the author of this work in accordance with the Copyright, Designs and Patents Act 1988.

All rights reserved. This ebook is licensed for the enjoyment of the purchaser only. To share this ebook you must purchase an additional copy per recipient. No part of this publication may be reproduced or transmitted in any form or by any means, electronic, mechanical, or otherwise, without the prior permission of the publisher.

Sophie King (also writing as Janey Fraser) is a journalist and novelist. In 2005, she won the Elizabeth Goudge Short Story Trophy and was a runner up in the Harry Bowling Prize. Her first novel,
The School Run
, was a bestseller when first published in 2005, and it was a bestseller for the second time when republished by Corazon Books in 2012.
Love is a Secret
(previously published as
[email protected]
) is the second novel in The Sophie King Collection

Other titles by Sophie King available from Corazon Books:

Falling in Love Again
(previously published as
Divorce for Beginners
)

Who's Who in Falling in Love Again

Session One: Getting To Know  You

This little bear can make your dreams come true by Christmas! Just send him to six friends and then make a wish. You’ll also be automatically entered in a draw for a free trip to Paris. Do not delete this email or your wish won’t come true!

This has been brought to you by www.whatmumsknow.co.uk, a new website for mums everywhere. Check us out for news, views and tips.

Honestly, that child’s addicted, thought Caroline despairingly. She had escorted her daughter back to bed, and returned to the screen. She couldn’t be the only parent driven to distraction by her computer-mad kids, but what could you do? Change the password again? Last time she’d done that, she’d forgotten the new one, and had to wait hours for the helpline. Under the desk Caroline snuggled her feet into her slippers. The trouble was that they all needed the internet: Georgie for homework, and herself for work, which was why she was sitting there now when everyone else (including Georgie, finally) was asleep. If she was quick, she could wrap up the feature she should have finished at work today and go through her inbox.

This little bear can make your dreams come true by Christmas . . .

If only! This sort of stuff should have been filtered out into the spam folder. To make it worse, her head was beginning to throb. Caroline delved into the deep pockets of her blue silk dressing-gown for the packet of paracetamol she always kept there, then knocked back a couple of tablets with a mug of tea-gone-cold.

Do not delete this email or your wish won’t come true!

This was almost blackmail! Who were these
What Mums Know
, and how had they got hold of her email address? She scanned the text. That explained it. It had come from Great Publicity, a service she often used as a journalist. It was quite useful, actually. If you needed case histories, you outlined the kind of person you needed to interview and why, then emailed it to Great Publicity, which sent it on to its client base of public-relations consultants seeking publicity for their clients. In return, they emailed journalists about new products and websites. Like this one.

She watched her finger hovering as though it didn’t belong to her.
What Mums Know
might be useful for her page. The sample tips, particularly the one about getting your children to bed, sounded quite good although the wish bit – accompanied by a spattering of hearts – suggested that the site, like so many, was run by an amateur.

An amateur who still believed in love. Caroline sighed wistfully, automatically twisting her thin gold wedding ring up to the knuckle and down again. Bears, hearts and wishes belonged to the kind of birthday cards she could no longer bring herself to buy for Roger.

Make a wish
. . . At this time of night, when she couldn’t think clearly, she was almost tempted. The bear’s eyes looked as though they really understood, rather like the white teddy she and Roger had given Annabel in the days when everything had seemed so simple. When she had been able to sleep at night instead of waking at three and thrashing around until daybreak. When she hadn’t felt the compulsion to stay up late and check Roger’s emails on the pretext of working. This time, there’d been nothing in his inbox that seemed remotely suspicious. But, then, he wouldn’t be so indiscreet. He never had been. It was she who had been stupidly naïve, unable to see the tell-tale signs.

‘Can’t you just forget it?’ Roger had said, in the early days when he still allowed her to talk about it.

Make a wish
. . . Caroline ran her fingers through her fringe. She could make more than one. She could wish that Annabel would email from Thailand, that Ben would get his A-level grades and start communicating in non-grunt language, that Georgie would listen in class, instead of getting reports that Roger fumed at. And she could wish that they could go back two years. To unmuddied waters. To when Roger hadn’t left a footprint that could never be wiped out.

Yeah, right, as Georgie would say. Who could she send it to, anyway, without them thinking she was one of those daft people who believed in stuff like this? It would need to be someone understanding, who’d known what she’d gone through.

Her sister Janie in Australia? Annabel, in case she bothered to check her email at an internet café? Her cousin, Linda, perhaps, who had just had a mastectomy? Zelda at work? Maybe Jeff.

Awkwardly, she scrolled down her address book, wishing she was as adept as Georgie, who would have lived online if not for Caroline’s official cut-off time of nine p.m. For that generation, ‘talking’ on Facebook was the equivalent of reading the Famous Five. But at least it wasn’t an open-to-all chatroom. She and Roger had banned those. It was one of the few things they agreed on.

The computer pinged as it dispatched the arrow into cyberspace, briefly punctuating the silence of a sleeping house. Annabel’s empty lilac-coloured bedroom, which still smelt faintly of her favourite Jean-Paul Gaultier scent – Caroline sometimes sprayed it to make herself feel her daughter was still there. Ben, fast asleep with his head under the pillow, in his room, which stank of sweat, and was crammed with CDs, textbooks and obscene posters on the wall – the kind you had to scrutinise before you realised that, yes, it really
was
what it looked like. Georgie, at the wrong end of her bed (restless like her mother), surrounded by cricket gear and teenage magazines. And Roger, sleeping the sound sleep of the unjust.

Feeling foolish, she began to whisper her wish, like a quiet chant. It felt soothing, like the prayers of her childhood, but now she really must go to bed or she’d never cope in the morning. Shivering (so much for summer nights), she padded down the corridor and slipped between the crisp lavender-sprayed cotton sheets. Roger reached out for her in the dark, his hand tightening on her waist. Was he imagining, in his sleep, that she was someone else? Uncomfortably, she moved away.

Crazy! But anything was worth a try.