Love Me: The Complete Series 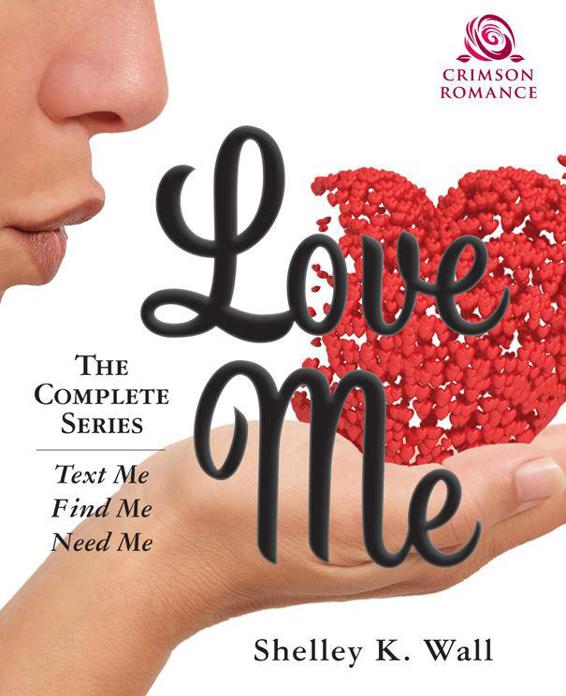 Enjoy special offers when you purchase any of our hundreds of great romances!

To my husband, Stan, for supporting all my dreams and desires throughout our years together. You are my inspiration, my kick-in-the-ass, and the source of my laughter and joy. I look forward to the next years.

And to my children, Tyler, Kyle, and Grace—never fear change or failure, fear only inaction. Those who do as much as they can in life will leave this world knowing great satisfaction. And perhaps a little exhaustion.

Thank you to all at Crimson Romance for seeing a spark in this series and helping bring it to publication. Thank you to good friends, Cindy and Megan, for helping me read, edit, and revise. Thank you to Dawn Dowdle of Blue Ridge Literary Agency for taking an interest in me personally and helping to develop my craft. I have learned a great deal from you.

Lastly, and most importantly, thank you to every reader who has purchased a book with my name on it and taken the time to delve in and read. You have my sincere appreciation if you also post a review. Without you, I would not be able to continue pursuing the projects of my dreams. I wish you great success in all your aspirations and goals.

Carter Coben arrived home after a grueling day at work and dropped his keys on the counter. He reached for a beer, then remembered his neighbor’s dog, and grabbed a bottle of water instead. A quick glance at his watch showed enough time to get Ruckus to the park before dinner. Carter had no idea why he’d volunteered to help walk the dog while Maddie recovered from surgery. Maybe because there wasn’t another tenant nearby who’d think to offer?

He retrieved the keys, stepped back out of his apartment, and trudged to Maddie’s place. He rapped the keys against the door and announced himself before turning one of them in the lock, knowing she wouldn’t—couldn’t—answer.

Crash.
The tinkle of glass breaking surprised him only mildly. Without much exercise, the beast was bound to break something.

Drool flew from the massive boxer/mastiff mix’s mouth and plastered the hallway as he surged toward Carter.

“Jesus, Carter, watch out! He’s wound tighter than a drum today,” Maddie called from the next room. Her high-pitched squeak of a voice always startled Carter, mainly because the voice didn’t match her appearance. She wasn’t a small woman. Her German ancestry shone through in the tall and equally hefty stature. Which probably explained the size of the dog.

“Hey, Ruckus.” The dog pinned him to the wall, and he rubbed between his floppy ears, staggering under the weight of his paws on his chest. “You ready to go outside, boy?”

Another string of drool threatened to land on his pants. Pushing the animal away, he peeked in on Maddie briefly before leashing Ruckus and heading to the park.

Half an hour later, Carter’s patience was shot. If Ruckus didn’t hurry up and get busy, he was giving up. The mutt had already watered every piece of grass in the park and only needed to take a dump. Normally the digestive reluctance wouldn’t bother Carter, but he was
not
skipping his dinner plans with his girlfriend, Amanda. He sat on a rock and flipped his smartphone open to the message onscreen.

App installed, do you want to open now?

It had been a crazy idea to try Justchat now. It was a crazy idea suggested by his friend Roger, which should have been reason enough to trash it, but the idea of chatting with someone anonymously sounded—easy. God knows he needed easy at the moment.

“Sure, why not?” He clicked and made up a login and password. The lengthy questionnaire that followed almost drove him to exit. Why should they need his life history for anonymous chatting? When he finally received a “Congratulations and happy chatting!” message, there was a tiny disclaimer at the bottom of the screen that probably should have been attached to the first question.

We try to pair our members with people of similar interests and locale. Feel free to skip any questions you wish but answering helps us find better chatting friendships for you.

He stared at the open dialogue box. What would be a good way to start? Should he quote someone? Hell, no. The only quotes in his head were too obscene to get a response from anyone worth talking with. Politics or religion? Nah, that could get ugly. He shrugged and began clicking away on the letters.

For years, I’ve wondered if there’s really anyone out there worth meeting. I mean, I see people once in a while … and I think they’re interesting. Then they’re gone and the moment escapes me. My life is filled with escaped moments that I never seem to grasp until I’ve missed them. Does anyone else feel that way?

It was a little dumb but fit his mood. He really should think hard about what he’d written since he planned to jump into a long-term commitment in a couple hours. Sure, most people wouldn’t consider season tickets a commitment, but for him, it meant consistency. Going to the same event with the same person regularly. Over and over again. Hmmm.

He dragged his fingers through his hair and caught a quick glimpse of
the running chick
. He laughed.

Now he remembered why he’d volunteered to walk Ruckus. Her. He’d seen her run in the park every night after work. Sometimes he’d been out for a few miles himself. Others he had just been with Maddie as she focused on her struggles with Ruckus and the boot on her foot. The girl always smiled and waved, even said “hi” to Maddie, and petted the mutt. Never a word his way, though.

He had wanted to meet her ages ago—before Amanda. And he wasn’t above using the damn dog to do so. She passed and the air stirred. Maybe he wasn’t all that wrapped up in Amanda after all. He couldn’t decide. Most runners bounced or plodded. Not this girl. In her running pants and tight jacket, the only description that came to mind was
glide.
Yeah, she glided across the ground in an effortless stride that was so smooth it mesmerized. She giggled at her phone as she passed.

Carter’s phone dinged a response and he glanced at the screen. A message from
She Hearts Dogs
. How appropriate considering his legs were almost completely wrapped in a leash at the moment.

I know what you mean! For me, it’s like I never know what to say before it’s too late and the opportunity is gone. Then you want to kick yourself for not coming up with something really witty or interesting and not completely moronic.

Yes, that’s exactly what it felt like. Ruckus yanked on the end of the leash and charged after the runner. Carter lifted his legs just as the leather tore loose from his fingers. “Shit.” He’d been busy reading the message and hadn’t bothered to grip the leash. The dog was bounding straight toward—

The bloodcurdling scream surprised everyone in the park except him. He saw it coming. That was what happened when you wore earphones, turned your music up high while texting, and got attacked by an overly-friendly beast from behind.

When he’d noticed her before, this wasn’t exactly the type of meeting Carter had intended. She lay on the ground, blinking at the sky and Ruckus, while struggling to right herself.

The drool didn’t help. What the hell was he thinking when he let go of the leash? Oh, right. He wasn’t. He himself was drooling. Only Ruckus’s slobber was close to landing right on her face. The tendril of spit strung lower and lower.

“Ruckus! Come.” The dog turned his way just as Carter lunged and grabbed his collar.
Whew.
The slime dripped to the grass and he yanked him off. “I’m so sorry. He pulled the leash from my fingers before I could stop him. Are you all right? Did he hurt you?”

So Great A Love by Speer, Flora
Moon Called by Patricia Briggs
Season's Regency Greetings by Carla Kelly
The 7 Points of Write: An Essential Guide to Mastering the Art of Storytelling, Developing Strong Characters, and Setting Memorable Scenes by Daniel Middleton
Hellsinger 01 - Fish and Ghosts (P) (MM) by Rhys Ford
Valley of the Gun (9781101607480) by Cotton, Ralph W.
The Maid by Kimberly Cutter
Looking for Cassandra Jane (The Second Chances Novels) by Melody Carlson
Hopes by Linda Chapman
Me Talk Pretty One Day by David Sedaris