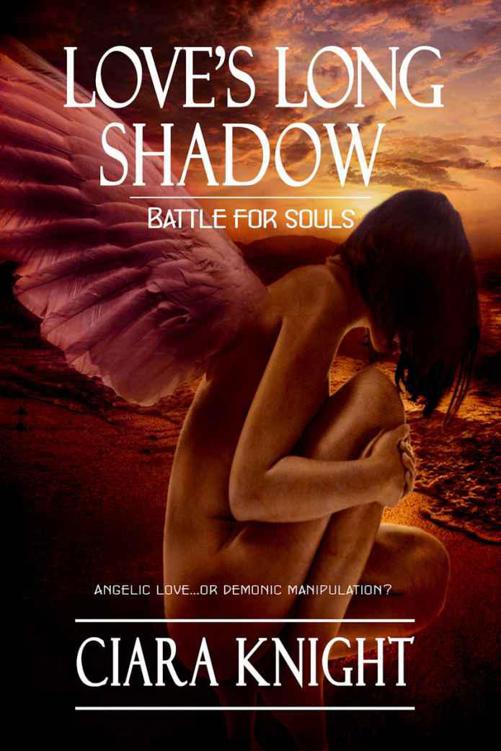 Warning: All rights reserved. The unauthorized reproduction or distribution of this copyrighted work, in whole or part, in any form by any electronic, mechanical, or other means, is illegal and forbidden, without the written permission of the publisher, Turquoise Morning Press.

This is a work of fiction. Characters, settings, names, and occurrences are a product of the author's imagination and bear no resemblance to any actual person, living or dead, places or settings, and/or occurrences. Any incidences of resemblance are purely coincidental.

To my husband and Julie
Helligrath

sacrificed to make my dream of publication a reality.

Sammy Lorre was cast from Heaven for conduct unbecoming an angel. Living in a demon-infested small town with no memory of her previous life, she faces never-ending purgatory until Boon saunters into her life with a promise of angelic love. But is he an angel from Heaven or a minion from the underworld preying on her human emotions? To discover his true identity, she must risk eternal damnation and her heart.

Sammy Lorre tugged her clinging shirt off her stomach and wadded into the cool ocean. Since her fall, she didn’t have any memory of Heaven, only an occasional moment of joy and pleasant dreams, but it had to be better than here. After all, it was called Heaven.

Saltwater swirled around her ankles and her feet sunk into the eroding sand with each retracting wave. A reminder of how fragile a barrier lay between fallen angels on earth and the depths of hell.

She waved for Alex to join her. He pulled off his shoes and tossed them to the sand. The waves rippled as he strolled into the surf. S
he clutched her brother’s arm the same way she clung to him when they had plummeted to Earth after their banishment.

“Take me with you.” Waves crashed against the shore, drowning her pleas. Her hands shook at the thought of losing him.

“No. Can’t risk it.” Alex stiffened, his gaze cast over the endless ocean. “If I fail…I won’t let you be dragged to the underworld with me.”

She released his arm and looked at the surf, watching the foam pop and fizzle. Her eyes stung from the wind and threatening tears—a bodily function she didn’t understand. The hollow space deep in her soul ebbed outward threatening to consume her. “Don’t say that. Stay. Please.”

He took her hand in his. “You have Grace, now. She’s like a mother to you. She’ll take much better care of you than I have or will.” He pressed a kiss to the top of her head. “I’m sorry.”

“Stop blaming yourself. We both—”

“It was my fault. If I had trusted…” He bowed his head and dropped his hands to his side. Sandy-blond hair brushed his chiseled cheekbone blocking her view of his bright blue eyes. Their eye and hair color were different but his chin and nose matched hers. Evidence Heaven meant for them to stay together. Why didn’t he see it?

“We could be a family here. You’d be my real brother, Grace our mother, and—”

Alexander’s muscles tightened and he stuck his chin out. “I don’t deserve a family or a home.”

She recognized the expression- Grace referred to as ‘self-brooding’. Her heart twisted with the loss of serenity, sparse images of life without pain and suffering. “We just got here. Give it time. It’s only been a month. These bodies we’ve been granted might be fifteen or sixteen, but we’re still in our infancy here on Earth.” She knew he heard her false cheer as she tried to convince both of them things would get better if he stayed.

“Maybe once we pay penance in these bodies, Heaven will send for us.” There had to be a reason, a purpose for their suffering, or at the least, a way to return home.

“I won’t waste a second of confinement in this flesh. It’s too much. My soul’s suffocating.” His clenched jaw twitched. “I’ll prove we deserve to rise again.”

She glanced at the large white house with the wraparound porch at the top of the hill. The home had stood against hurricanes and served as a way station for fallen angels for years.

The fading evening sun reflected from the windowpanes. Her heart warmed at the sight. “You’ll adjust. Give it a chance.”

“Grace adores you. You have a home here, and with her years of experience as an Earthbound Angel, she can help you.” Alexander’s gaze narrowed. “I have to go.”

He released her and marched from the water.

“Wait.” Sammy ran after him. “You don’t have to go back up north. Maybe we can help people here.”

“I’m following the lost souls to the master demon so I can destroy the coven forever.”

“You said that there were lost souls here.”

“Stay away from demons.”

Again with the demon hating. Weren’t they all lost souls imprisoned on Earth? “Why?”

There was no arguing with Alex. Not when his forehead wrinkled into fierce lines of determination. “I promise.”

He pulled his shirt over his head, fisted it by his side, and picked up his sandy shoes. Crackles and snaps sounded from his body. His face flushed and he arched over for a second before his wings exploded in a brilliant navy hue. White fluffy feathers rippled in the breeze as he stretched his wings to their full fifteen feet span while rotating his broad shoulders. He rose a few feet off the ground with one flap of his wings. She shielded her eyes from the rush of air. Without another word, he shot into the sky, leaving behind a cyclone of sand.

She wiped the gritty particles from her eyelids and clenched her fists. No. This wasn’t over. She wouldn’t give up. The muscles in her back tightened and seized as she prepared to follow him, but a firm hand grasped her shoulder.

“What if he fails? He could…” Sammy’s stomach twisted with grief. She focused on wisps of Grace’s loosened silver hair dancing around her head like a halo. How could an angel with years of sacrifice and servitude to others not have been welcomed back to Heaven? Certainly if anyone deserved to rise, it was Grace. Was there truly hope for any of them?

“Trust me, child. He needs to find his own path to forgiveness. We can’t find it for him. Come inside. We’ll chat over a cup of tea.”

Following Grace inside meant a soothing evening with no drama, but Sammy didn’t want to be comforted. Not right now. “If you don’t mind. I’d like to be alone for awhile.”

“Of course, dear.” Grace gave one of her reassuring smiles that stitched a small corner of the gaping hole in Sammy’s soul.

Barefoot, Sammy trudged up the sand dune. Strange how Grace’s presence always soothed her. But not now, now she needed to be alone.

The cool, damp sand squished between her toes, tickling her. What a strange sensation. Not completely unpleasant, but different. There were many things on earth to learn and sensations to experience.

She found her way to the clearing near the main dirt road to town and sat on a downed tree looking up at the stars in the darkening sky. Their brilliant diamond pulses mesmerized her. How long would it be until she returned home?

Headlights shone through the tall pine trees. Loud music echoed and engines zoomed past toward the main beach.

She pushed from the log and followed the music. Tree roots and debris cut into her feet but she maneuvered into dense bushes and crouched between two massive oak trees. She pushed the thick grey moss to the side and peered out.

Flames flickered from
tiki
torches stuck in the sand. Massive trucks with painted flames over the rear wheels and large monsters with pointed horns on the side were parked in a circle. Her heart thudded faster than the tree branches thrashing at her skin in the wind. A few girls and half a dozen guys dressed in strange jackets with letters, lifted wood slats from the bed of a truck while they hooted and hollered. They threw the wood into a pile, stripped their jackets off, and yanked their t-shirts over their heads before running into the surf.

A petite brunette with a bikini stumbled around laughing before she joined them in the water.

Sammy remained in hiding, watching the figures silhouetted in the silvery moon that rose into the night sky.

A light pinch on her leg caught her attention and she smacked a mosquito into a glob of red and black goo.

She flicked the remnant from her skin and moved around the large tree trunk for a better vantage point. One of the larger boys sauntered up to the beach and grabbed a canister from the truck. He squirted liquid onto the pile and lit a match, tossing it onto the wood, igniting a blaze that sent plumes of smoke into the sky.

The others joined him, popping cans open, they sat on the back gate of their trucks watching the flames. Shadows moved in strange patterns around them. Sammy’s skin pricked in warning. Instinct told her these boys weren’t human, and certainly not from Heaven.

A dark force folded in around her. A sense of desperation propelled her forward. Her body ached to join them. Her mind and soul demanded she stay hidden. Drawn to the crowd, she took a small step forward.

“Stop.” A deep voice startled her from behind.

She whirled around, breath caught in her throat. A small-framed young male stood a foot away. She shuffled back from him toward the beach. He grabbed her by the elbow with the speed of an angel…or demon.

A warm tingle surged from his hands and goose bumps erupted, covering her body. A musky, deep earth scent drew her closer. His soft eyes peered over black-rimmed glasses a couple inches above hers. No way those chocolate spheres contained evil.

The ones in the circle were full of depravity. Nothing ebbed from his body in warning and no dark shadow cast over him even in the muted light left in the sky.

He stepped away and shoved his hands in his short’s pocket. His face cast with an orange glow from the bonfire on the beach. “Why are you out here alone? Where’s Alexander?”

Sammy’s mind swirled with possibilities of how they knew each other and she reached the probable conclusion, Alexander had threatened him. “Listen, if my brother demanded you stay away from me, don’t worry, he’s gone away for a while.”