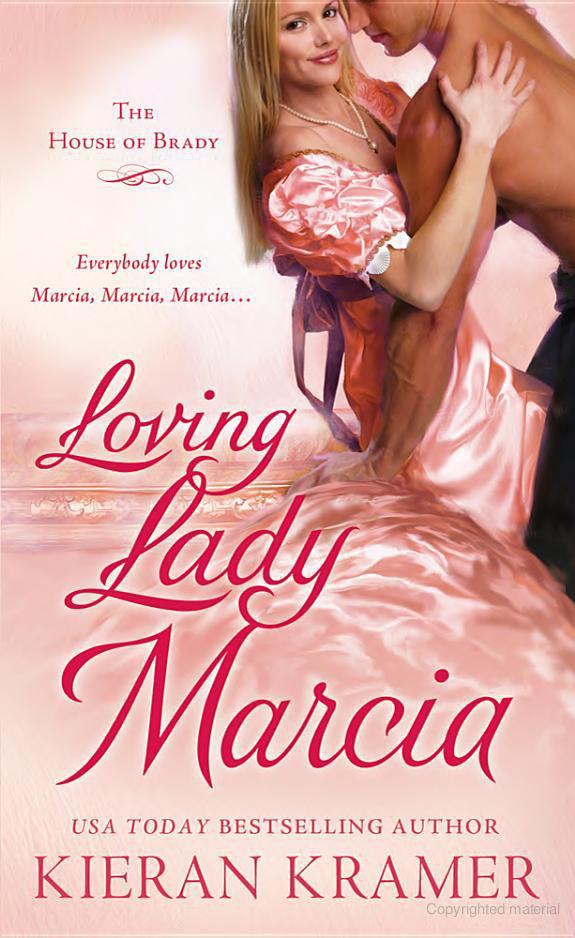 To Ted and Dottie Kramer, loving parents to me, doting grandparents to our children—and the best in-laws a girl could ever have

A girl knows when her life really begins, and for fifteen-year-old Lady Marcia Sherwood, daughter of the Marquess and Marchioness of Brady, it was the moment she met the two Lattimore brothers.

When the first one took his seat in the Brady carriage, she had to clamp her teeth together to keep her mouth from falling open. If her friends at school could only
see
him. They’d never believe he was this handsome.

“I’m Finn,” he said. “Pleased to meet you.” He gave a half-grin, his eyes gleaming with
something
.

He must guess. He must know she found him attractive. Or perhaps he found
her
attractive.

Oh, dear. Could that be so?

That would make life so much more interesting. The brothers were to be her traveling companions to Liverpool, and then across the Irish Sea to Dublin, where she’d reunite with her family.

Marcia smiled, being careful to keep her expression demure, but inside, her heart was pounding. “I’m Lady Marcia Sherwood,” she said, feeling like an idiot. “But please—call me Marcia.”

Her maid nudged her in the side. “
Lady
Marcia will do, young man.”

His clothes were of the finest tailoring, setting off his good looks so well that Marcia had to wonder how he
lived
with himself. Had he gotten used to being so handsome?

“Right,” he said lightly, “of course,” and smiled at her as if to say,
When we’re alone, I’ll call you Marcia
.

She already adored him.

A shadow fell across his face as another figure entered the carriage. This young man was just as tall but more solidly built and definitely the older of the two. Marcia had to move her knees sideways to allow him proper room to settle. Once he had, he looked directly at her.

He was striking in his own way, with compelling dark brown eyes, but he lacked the charm—or should she say, the obvious delight in his surroundings—that the younger brother exuded. In fact, his tightly furrowed brow suggested he was slightly irritated before the trip had even begun.

The very exciting, adventurous trip she’d been looking forward to for ages.

“Good morning.” His imperturbable gaze encompassed both her and her maid. “I’m Lord Chadwick,” he threw out in bored tones, as if they should be very grateful he’d spoken at all.

She did
not
like him. Her body felt prickly and hot, and it was clearly his fault.

The maid smiled at the earl. Marcia could tell she was gratified that he’d included a mere servant in his greeting. But Marcia didn’t give him credit for it. She wouldn’t. He’d put her off.

Lord Chadwick inclined his head at her. “You must be Lady Marcia Sherwood.”

It was a statement, not a question. And he said it as if he didn’t give a fig
who
she was.

“Indeed, I am.” Marcia forced a corner of her mouth to tilt up—to please Mama. She’d been brought up with manners, after all.

“I’ve heard much of your family.” His tone was cordial but cool. He was going through the motions of polite behavior, nothing more.

What would Mama do?

She’d probably say something complimentary—and sincere—to put the person at ease, so Marcia racked her brain. “My parents and I are grateful for your escort all the way to Dublin. That’s a trek.” She gave a little laugh.

“Of course it’s not,” Mr. Lattimore interjected warmly. Thank God for
him
. He was like a knight in shining armor sitting next to a knave. “Why not travel together? We’re going to the wedding ourselves.”

His older brother didn’t bother acknowledging the interruption. “I understand the rest of your family is currently ensconced at your Irish estate?” he asked Marcia.

Poor Mr. Lattimore. To be treated like … like a
nobody
. Yes, Gregory treated Peter that way, and Peter did the same to Robert, but still! It must be humiliating, and Marcia was sure Lord Chadwick was a far more aggravating brother than any of hers.

“Oh, yes. You must mean Ballybrook. It’s the greenest place you’ve ever seen. Daddy”—she pronounced it the Gaelic way,
Doddy
—“and Mama retire there when Parliament isn’t in session. Otherwise, they’re quite comfortable on Grosvenor Square in London. It’s a busy life, but they say they have the best of both worlds. One green and comfortable—and one sooty … but terribly elegant, all the same.”

There was a faint gleam of something in Lord Chadwick’s eye. Was it amusement? And if so, why? Marcia felt indignation surge in her breast, but of course, she wasn’t permitted to show it.

Instead, she turned to look at Mr. Lattimore and was gratified to see that he didn’t appear amused. He seemed to understand her completely. His large amber eyes gazed into hers with utmost sympathy, and she returned the look as discreetly as possible.

She was forced to look at his brother, while Mr. Lattimore had to sit next to him.

It was hard to say who had it worse.

“She’s got a point.” Mr. Lattimore elbowed the earl. “We can have the best of both worlds, too, now that you’ve got the title. Why stay in Kent when we can be in Town?”

“Because the estate in Kent needs a great deal of work.” Lord Chadwick’s tone was distinctly annoyed. “And I’m not ready to take up my seat in Parliament. Not yet. I’ve a great deal of reading to do on a host of topics. Not to mention that London soot
is
a bit off-putting.”

“That’s not it at all,” Mr. Lattimore stage-whispered to Marcia. “London’s too amusing for him. My brother is all about duty.”

“As you should be, too,” Lord Chadwick muttered, his eyes on the window.

The maid stopped knitting a moment.

“Well, then,” Marcia said brightly, whereupon the maid’s needles began flashing in and out of a skein of wool once more. “We have a long way to travel together, don’t we?”

“Indeed, we do.” The earl’s tone was dry. He turned from the window to study her a brief moment then pulled a small book out of his pocket. “If you don’t mind, I’ll be reading much of the trip.”

“Not at all,” she said courteously.

Mama would be proud of her composure in the face of such rudeness. Or grown-upness. Marcia couldn’t tell which was which sometimes.

The title of the book was something about the politics of war. Lord Chadwick cleared his throat and became immersed in it immediately.

Marcia exchanged the briefest of bemused glances with Mr. Lattimore. The earl thought to dismiss them as if they were children, didn’t he?

She suppressed a sensation of pique. Couldn’t he see that his younger brother was far from a child? And that she was a young woman?

She had brains. She could carry on an adult conversation. Not that she wanted to about the politics of
war,
of course. Perhaps something about the politics of
fashion
. There were definite sides to be had on so many issues—bonnets, ribbons, sleeve styles—although she
could
talk of war if she had to.

Lord Chadwick turned a page of his book. The maid’s knitting needles clicked and clacked. Mr. Lattimore raised his brows in a comical way and angled his eyes toward his brother.

Marcia stifled a giggle. She was too mature to giggle, of course. But Mr. Lattimore was … well, he was simply adorable. He brought out the mischievous in her.

Lord Chadwick looked up, his gaze neutral yet somehow intimidating. When he went back to reading, Mr. Lattimore’s very expressive eyes expressed relief.

I’m sorry for you,
her own eyes said back.

We won’t let him ruin the trip,
she read in his.

Understanding swelled between them. His mouth tilted up, just barely—a secret smile meant just for her. He leaned forward, the sharp-eyed maid’s needles flashing close by.
Close enough to stab him in the thigh or arm if she so wishes,
Marcia had the incongruous thought.

Thankfully, Mr. Lattimore appeared oblivious to any danger.
And if he were aware of it at all, I suspect he’d scoff at it,
Marcia thought.

He was that sort of young man.

“Fine weather for traveling,” he whispered to her.

“Yes,” she whispered back.

But the fine weather hadn’t lasted. In fact, their carriage lost a wheel en route to Liverpool, in the midst of a great, slashing storm. Thankfully, they’d been near enough a market town that Lord Chadwick had walked there with the driver to procure another. But then another deluge prevented any travel for several days.

When they finally managed to board a packet to Ireland, Marcia was already head over heels for Finnian—Finn, she called him. How else to explain that she felt completely new? Joyful? Needy? And very, very confused?

Although perhaps
blissful
was a better word. Blissful
and
aching. How she ached! Yet it was a blissful ache. Which made no sense—

Good Lord, she needed help. But she couldn’t tell Mother what was going on. It was too …
private
at this point.

Janice would be a lovely confidante, but she’d have her two childhood friends with her at the wedding. She and Marcia both would be distracted by the festivities—and Marcia needed a good, long coze with her sister to explain what it felt like to fall in love. This wasn’t something she could toss off in casual conversation.

There were her close friends at school, of course—she could write them letters. Wouldn’t they read her story avidly! But she didn’t feel comfortable revealing her feelings in a missive that could possibly pass through many hands. What if her classmate Lysandra read it? She and the two foolish minions she’d managed to recruit from among the student body would make fun of her, and that Marcia couldn’t bear.

On the packet, she’d passed several girls on deck her age, but even if she were to befriend them, who wanted to reveal such deep passion to someone one had only just met?

Of course, she’d only just met Finn, too, but that was different. They’d been through so much together already. He wasn’t a stranger in the least. Riding together in a carriage for days on end tended to make one familiar with someone rapidly.

The curse of Kalaan by UNKNOWN
Misled by Kathryn Kelly, Crystal Cuffley
Rogue by Lyn Miller-Lachmann
Into The Dark Flame (Book 4) by Martin Ash
The Faithful Heart by Merry Farmer
Unleashed by Abby Gordon
The Executioner by Chris Carter
The Camelot Code by Sam Christer
Franny and Zooey by J. D. Salinger
Missing: The Body of Evidence by Declan Conner