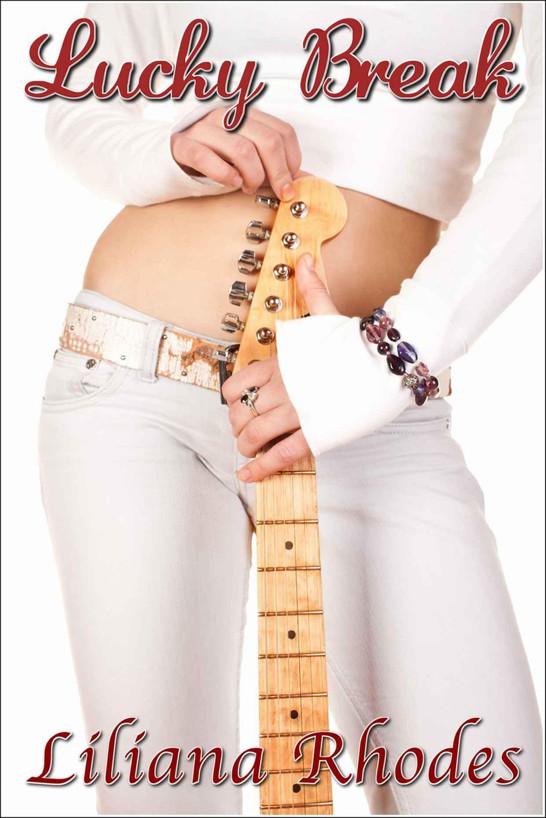 WELCOME TO THE JUNGLE

"Is Lucky your real name?" The voice on the phone asked.

After spending the afternoon doing phone interviews, the voices seemed to meld into one. Olivia "Lucky" Saldano stifled a yawn before answering. She knew her answer didn't matter much, no matter what she said she'd always be called Lucky; whether she liked it or not.

"No, it's Olivia. Lucky came from my parents. When I was born the doctor said I was lucky to be alive. The nickname stuck."

She didn't know why she gave the interviewer so much information, but she couldn't help it. When her nerves got the best of her she babbled. It didn't matter how many interviews she had done, each time the phone rang that afternoon the butterflies in her stomach kicked into high gear.

She wished she didn't have to do any interviews, but that wasn't what the record label wanted. She had only been signed a month but already knew there was only one way things happened–the label's way. It didn't bother her much though because she was living her dream.

"You're getting ready for your first tour. Have there been any concerts that made an impression on you?"

"Well I've only been to one concert, but I'll never forget it. I begged my parents to see Silverlight three years ago."

"Yeah that one, but no one knew it then. Jude Morrison played this drum solo that was out of this world. It had so much feeling and finesse to it. There we were in an arena but he made that moment so intimate. I knew right then what I wanted to do with my life. I swear every time I write a song, I imagine him playing it."

Sitting in a wood paneled office, musty from decades of use, Lucky couldn't be happier. She imagined some of her heroes sitting there decades before her, fielding stupid interview questions over the phone too and it made her smile.

"So is it clichéd to call this your lucky break?" The interviewer asked.

She sighed, this time forgetting to cover it up. For as long as she could remember, people came up with ways to use the word 'lucky' to describe a situation with her. She knew landing a record deal was amazing, but to her the real lucky break was being able to get away from her parents for the first time in her life.

"I've heard things like that my entire life. You'd be surprised what people come up with. But no, I wouldn't call this my lucky break. I've worked hard to get to where I am. I deserve this."

"I'm sure you do. A Berklee degree is nothing to sneeze at. Especially when you graduate early like you. Would you mind telling us some other ways people have used your name? I think our readers would be interested in that."

"Off the top of my head, there was this guy once who declared it my lucky day before he asked me out."

"And did you go out with him?"

She laughed. "No, but not because of that. I just didn't have time for a social life."

Dammit
! She knew she'd end up saying something she would regret. She chewed her bottom lip as she wondered what to say next, but she knew the truth was the best route. "Umm no. I uhh didn't get out that much," she stammered.

"But you were at college, surely you did some partying. What about high school?"

The intrusive questions blasted at her but she didn't know how to stop it. Too nervous to think of a witty way to end the interview, she chose to answer.

"My parents were very strict, they still are. I think it scared a lot of friends away because they had much more freedom than I ever did." She paused for a moment wishing the interview would end. "I lived at home in college. I didn't grow up very far from Boston so it was an easy commute. Plus I spent as much time as I could in the rehearsal rooms practicing and writing. Sometimes I could only get in at 3 in the morning, but the time didn't matter, it's what I love. Music was the one thing my parents never restricted me with."

Lucky looked up from the old desk chair as Chuck Russo, her album producer, opened the door and signaled time was almost up. Nodding at him, his jet-black hair gleaming under the fluorescent lights, she was grateful for the excuse to end the interrogation.

"It's a shame, you have a really pretty face. Maybe once you're on tour you'll get out more. Thank you for answering my questions."

Lucky cringed as she hung up the phone. She knew what the interviewer really meant–you have a really pretty face for a fat girl. It was something she heard a lot of lately and she didn't like it one bit. Pretty was pretty, whether you were fat or not.

She didn't consider herself fat, but she definitely wasn't thin. Lucky never thought much about her size until recently when the record execs made it a big deal. Lucky was confident in who she was, but lately with so much being made about her appearance, she began to wonder if she was being naive, something she was often called.

Entering a small powder room, she looked at herself in the mirror. Her light brown waves hung down her back, almost to her waist. The length of her hair reminded her that she hadn't had a hair cut in years. Her dark brown eyes had the same slight upward slant to them as her mom's, making her look a little exotic especially combined with her high cheekbones.

She pinched her full cheeks then sucked them in, accentuating her cheekbones. There wasn't any point in it. She knew nothing short of a miracle, could make her look thinner.

Smoothing down the boho-style peach tunic she wore over a faded pair of jeans, she hoped one day the looks and words of others wouldn't mean so much. For now though, they did. While she thought nothing could shake her confidence on stage, she was beginning to feel less sure of herself off of it.

Hearing a soft knock on the door she shook her hair with her fingers. She hoped the musicians arriving for auditions today would be more concerned with talent than if she ever had a boyfriend or what her real name was, but she doubted that.

"Hey it's me, open up," said the soft squeaky voice of Jordan Blake, Lucky's best friend.

Jordan and Lucky met on the school bus ride home when they were five years old. Seated next to each other, they put their feet up against the back of the seat in front of them and discovered they had on the same shoes. They were best friends since.

Jordan's blonde pixie cut suited her. She was petite, small boned and fragile looking, but her blue eyes heavily lined in black kohl hinted at her toughness. Wearing a pair of work boots with black leggings and an oversized shirt, she looked like Tinkerbell gone bad.

Lucky knew her best friend had problems at home and would do anything to escape, but she didn't know how bad things really were for her. Jordan never spoke about it and Lucky was smart enough to not ask, but when the tour happened she knew Jordan would jump at the chance to go with her.

"All done with the interviews? Did any of them call you Olivia?"

"I don't think they even care what my real name is. Everyone's focused on Lucky."

"Lucky you," Jordan giggled. "Have you heard from your parents today?"

"What do you think?" Lucky showed her her cell phone with multiple missed calls and texts. "I told them I had a busy morning with back to back interviews before meeting the band, they need up to date details though."

"They should've come out to LA with us then."

"Noooo. Trust me when I say they wanted to. I told them the label said they couldn't, they'd be a distraction. Do you realize this is the first time I've been away from home?" Lucky shook her head as she thought about that and then groaned. "I told the last interviewer I've never been on a date. I really have to learn when to shut up."

Jordan laughed. "I can't wait until that comes out! I'm so buying that magazine. You've been on a date though, why didn't you tell them about that?"

"Ha! Tell them about being such a loser that for me to go to the prom my mom had to find me a date? No thanks!"

"Oh give me a break, that guy was crazy about you. And if I remember right, he was pretty cute too."

"But Mom, Jordan's my best friend! Why can't we share the limo?"

"Lucky, I've told you before, you're not allowed to drink."

"I'm talking about the limo though, this has nothing to do with drinking."

"Then I sure hope the driver is underage."

"Don't get smart with me. You know what I mean. You can get a limo for the prom, just share it with one of your other friends."

"I don't have any other friends. Jordan's the only one who puts up with the constant checking in. I mean you guys even call the theater to check the time the movie's over so you know when I'll be home."

"What about that Sean boy down the street? I ran into his mother at the supermarket. He's going with his girlfriend and I don't think they have a limo yet."

"Yeah, just perfect Mom. I can share the limo with two people I barely know and my stranger of a date. What a special prom memory that'll make."

"At least you're going. And your father and I expect you home right afterwards. You can visit with Jordan the next day if seeing her at the prom isn't enough."

"No I can't, she's going away for the weekend. Like every other kid in school."

"Well that's fine that they all have such neglectful parents. I can't help it that we worry and protect you."

"If only my mom knew what a perv she set me up with for prom. I had to keep pushing him away."

"What are you talking about? I've been kissed!"

"Don't you start. It counts. I'll never forget Tommy Hearon. How he waited with me for the school bus. The way he leaned in towards me..." Lucky's voice trailed off dramatically.

"The way his braces got caught on your lip."

As they laughed, Chuck popped his head back into the office."Lucky? It's almost time. Are you ready?"

"Yes Chuck, I'm coming." She turned towards Jordan. "Let's go! I've been dreaming about this my entire life."

Chuck Rosso was known as the dream maker. When record companies had a lot riding on a new talent, they called Chuck in as producer. He had an uncanny ability to get unknowns onto the charts.

Lucky completed her album with Chuck just a couple weeks before. Using studio musicians helped the process go smoothly. But now that she was going on tour she needed a band. Since Chuck was the most familiar with her sound, he offered to help.

Lucky grabbed Jordan's arm and pulled her out into a busy corridor with pale green tile flooring and rust colored walls. As they walked down the hall they passed gold and platinum records. The old recording studio was exactly like Lucky imagined.