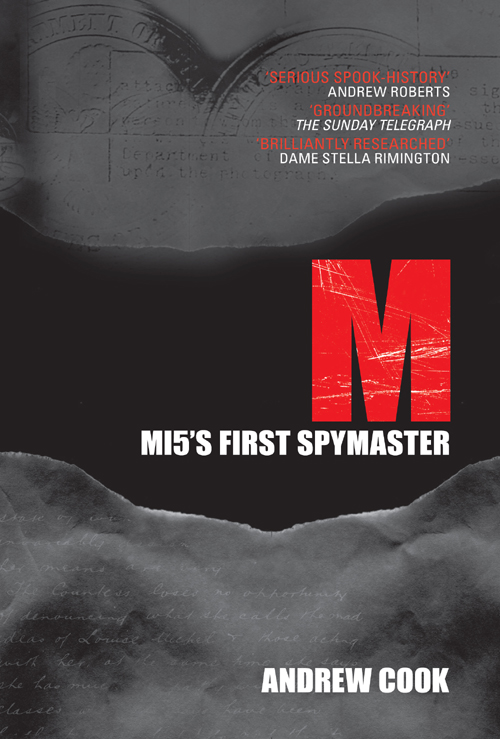 M15'S FIRST SPYMASTER
A
BOUT THE
A
UTHOR

Andrew Cook worked for many years as a foreign affairs and defence specialist, and the contacts he made enabled him to navigate and gain access to classified intelligence services archives. He is only the fifth historian to be given special permission under the 1992 âWaldegrave Initiative' by the Cabinet Office to examine closed MI5 documents that will never be released. He is author of critically acclaimed
Ace of Spies: The True Story of Sidney Reilly, To Kill Rasputin: The Life and Death of Grigori Rasputin
and
Prince Eddy: The King Britain Never Had,
all published by Tempus. He was the historical consultant for the recent BBC
Timewatch
documentary on Rasputin, and was presenter and historical consultant for the Channel 4 documentary about the life of Prince Albert Victor. He is a regular contributor on espionage history to
The Guardian, The Times
and
History Today.
He lives in Bedfordshire. 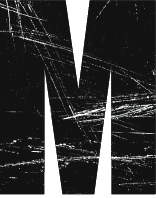 The right of Andrew Cook to be identified as the Author of this work has been asserted in accordance with the Copyrights, Designs and Patents Act 1988.

I am greatly indebted to all those who have assisted me at the various stages of this project.

In particular, my thanks go to the Melville family, both in Ireland and New Zealand, and to HM Government. As a result of an approach to the Cabinet Office, the Government agreed to provide me with a briefing based on the records of William Melville's service with the War Office for the purpose of this book. I am equally indebted to Lindsay Clutterbuck, Steve Earl, Tom Oakley and John Ross of the London Metropolitan Police for their assistance with New Scotland Yard records and archival material.

I would like to thank those who have previously written on this and related subject matters for speaking or corresponding with me â Professor Christopher Andrew (Corpus Christi College, Cambridge), Gill Bennett (Chief Foreign Office Historian), Christy Campbell, Dr Nicholas Hiley (University of Kent), Alan Judd, Nick McCarty and Tom Wood.

The help and co-operation of the families of those who played a role in Melville's story has been greatly appreciated, as has the assistance of Francis & Francis (private and commercial investigators) who helped in tracing them.

Shortly after her retirement as Director-General of the Security Service (MI5), Dame Stella Rimington paid tribute to the founding fathers of the Service and publicly acknowledged the role of William Melville, the man âwho came to be known as M'. At the start of the twentieth century, when London fogs â pea-soupers â blanketed the city, it was Melville who, from a small secret office in London's Victoria Street, determinedly lobbied the Government to create an effective counter-intelligence service. Today, MI5, the organisation he strove to create, is a household name and one of the world's leading intelligence agencies.

Melville talked to kings and murderers, con men and wily diplomats; he had a way of getting what he wanted from them all. In his day he was a master of detection. He had a devious mind and a bleakly humorous view of humanity, and because he understood the motive of the criminal or the desperate, he was able to pioneer methods and tactics that still work â today, methods improved by advanced technology.

Melville was the son of a publican in rural Ireland. Guileful and single-minded, he came to London when it was the hub of the Empire and worked his way through the ranks of the Metropolitan Police. As the most famous detective in England and head of Scotland Yard's Special Branch, he retired at the start of the new century and disappeared from public view. The enduring achievement of his life lay ahead: to transfer the ethos and practices of detection to the War Office, its spies and agents all over the world.

He died in 1918, and eighty years passed before his true significance as MI5's first spymaster became apparent with the release of early Secret Service documents to the Public Record Office. Very little further documentation about Melville and his career has come into the public domain since. To piece together an accurate picture of his extraordinary life, I have drawn on as many primary sources as possible. Melville's family and the descendants of those who played key roles in his story have been tracked down and interviewed; they have been invaluable in illuminating a life's work that pitted Melville against Jack the Ripper, Irish terrorists, anarchist assassins and German spy rings.

Now, with the help of recently declassified records, family accounts and documents that still await official release, the full story of his incredible career can finally be told for the first time.