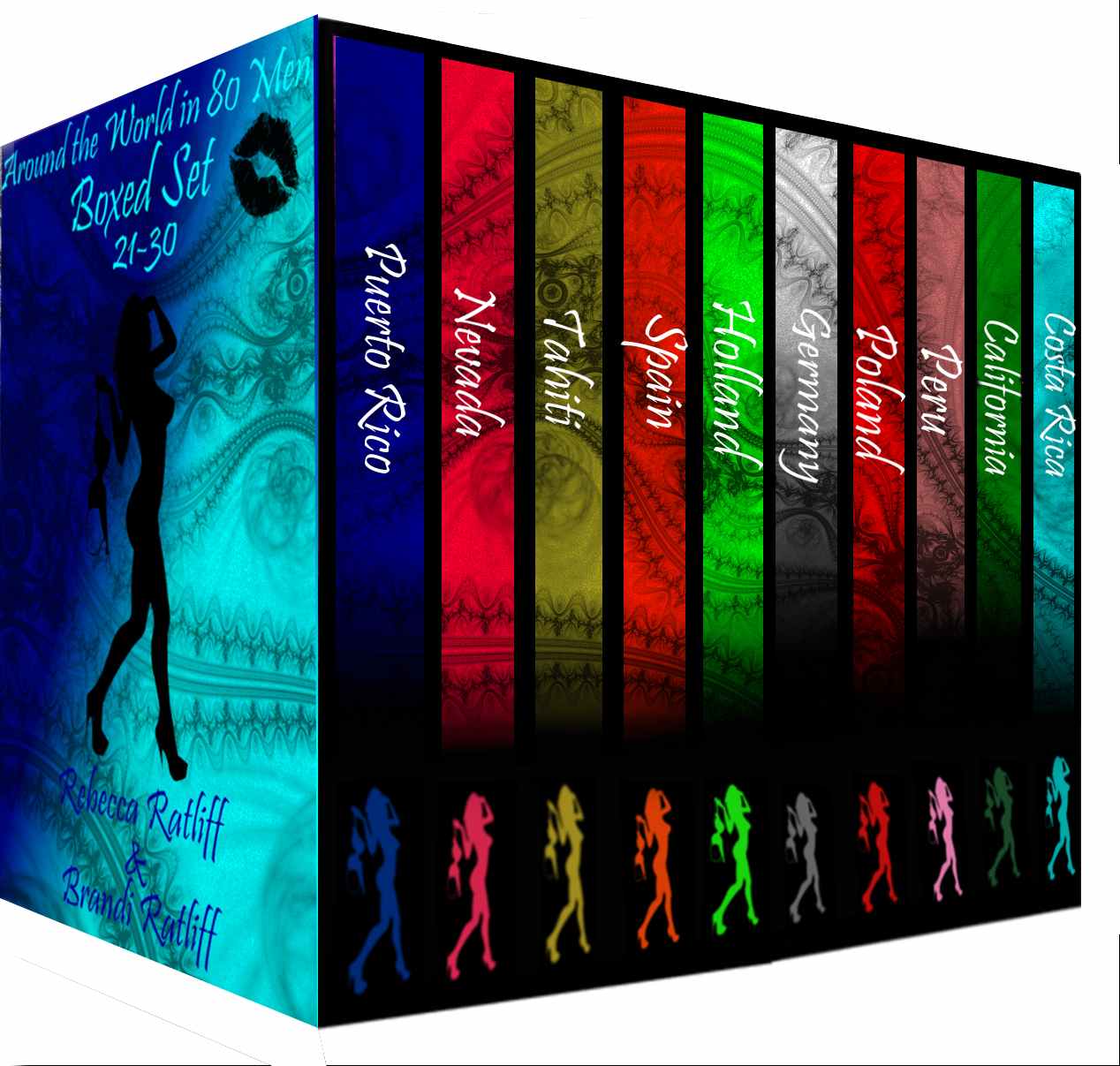 Around
the World in 80 Men

Around
the World in 80 Men

All
rights reserved. No part of this publication may be reproduced,
distributed, or transmitted in any form or by any means, including
photocopying, recording, or other electronic or mechanical methods,
without the prior written permission of the publisher, except in the
case of brief quotations embodied in critical reviews and certain
other noncommercial uses permitted by copyright law.

This
is a work of fiction. Names, characters, businesses, places, events
and incidents are either the products of the author’s
imagination or used in a
fictitious
manner. Any resemblance to actual persons, living or dead, or actual
events is purely coincidental.

Want
to know how the authors perceive Morgan and her clients? Check out
the official facebook page for photos, excerpts, release dates and
more!

“
No,
seriously, who's that shit from?” Cedric kept looking from the
shocked woman in the passenger seat to the road ahead, then back to
her. The only thing she did though was shake her head silently as she
stared at the large diamond engagement ring in the little box. “You
really don't know?”

Again,
Morgan shook her head. “There isn't a name or an address
or...anything. That's it, just this note,” she said, holding up
the box so he could see for himself. She'd already flipped it over in
every direction, hoping to give herself that same answer, but none
would be given.

“Who
knows you're here?” They were almost at the airport and Cedric
wanted some kind of answer before she had to leave.

“No...nobody.
But, the men...the clients I have, they have enough money to find out
anything.” Her mind went to Finlay, how he'd paid the front
desk of her Florida hotel to find out what room she was in. Money
could buy information, she knew that much. “Fin,” that's
where her thoughts settled. It wouldn't be anything for a man like
him to find out what he wanted. He could have even asked Julianne. If
he told her he wanted to propose, she might have even given him the
information.
Or Cade. Cade would do it.
It had to be Finlay.
She'd just seen him and things had felt...
different. And he called
me his girlfriend
. She knew he hadn't exactly meant it that way,
but...

“I...I
think...I mean, it has to be,” she couldn't even finish her
sentence. Her heart was about to beat right out of her chest and
suddenly, the car felt incredibly hot. She unzipped her jacket
halfway and fanned her face. Marriage? No, she couldn't possibly
consider the notion. Morgan closed the small box, then slid it into
her coat pocket as they rolled to a stop in front of the airport.

“You
said a name,” Cedric pointed out, not letting her off the hook.
“You think it's that Scottish man?”

She
nodded slowly, then pulled her purse over her shoulder and grabbed
the car handle. “I think so.” Cedric saw she was antsy to
get out and unbuckled his seat belt, then ran to her side of the car.

“What
are you going to do?” he asked as he pulled her to her feet.
Her toe was still sore, but after a week, it was at least tolerable
to walk on. She walked to the back of the car without answering, then
waited for Cedric to open up the trunk.

“Shit,”
she sighed. “Well, I'm not planning a wedding, if that's what
you're asking.” A few giggles escaped before she caught the
time on her watch. “Oh! I have to go! Cedric, thank you so
much! You are absolutely wonderful!” Morgan gave him a quick
hug and a kiss on the cheek, then grabbed her bags and began lugging
them into the airport.

“Call
a bitch!” Cedric yelled behind her and Morgan laughed again at
how similar her best friend and her new friend really were.

She'd
just been proposed to, she had to pee and she was starving. If that
wasn't quite stressful enough, her plane was already boarding by the
time she got through the check in and security process. Luckily,
Morgan made it to her terminal with seconds to spare and was the last
one to find her seat on the plane.

“Sorry,”
she mumbled as she stepped across two people to reach her window
seat. At least she'd had time to use the restroom before take
off...
but someone out there is wondering if I'm their fiance.
How
weird, she thought, to send a box with a ring and a proposal and not
even give their name.

He
wants me to figure it out.
If it was Finlay, as she thought,
Morgan knew why he wouldn't put his name.
I get a mysterious
ring. He's wondering if I'll run to Tanner first. But...what if it is
Tanner?
She hadn't given Tanner much thought, but she
had
just
seen him as well, and the whole talk about giving them a chance to be
together...
oh shit. This isn't good.
If it was Finlay and she
asked Tanner, if it was Tanner and she asked Finlay...it was a
lose-lose.
What if
it's neither of them?
She tried to
think about each of her clients. Had any of them been extra clingy?
Would any of them move so quickly? Of course, she wouldn't have
thought any of them would propose, not in a million years. The idea
of either man proposing in a cryptic way didn't seem as if it would
be their style... especially not Finlay, but she couldn't rule them
out completely.

Kole
wanted to talk to me. No, no....he would never. Or would he?
By
the time the plane was in the sky, Morgan was a nervous wreck. She
pulled the box out of her pocket, then picked up the ring and brought
it closer to her eyes. Maybe the style would give her some insight.
It was a simple round diamond, a large one and a half, maybe two
carats, and on either side were two smaller diamonds, all beautifully
displayed on a white gold band.
This tells me nothing,
she
sighed at her thoughts.

Morgan
didn't want to lose the ring, at least, that's the excuse she told
herself when she slid it onto her right ring finger. She wouldn't
dare wear it on her left hand, but a little test run might not hurt.
At least until she figured things out.
Whoever you are, I'm so
sorry...

“Excuse
me, do you have the time?” Morgan questioned the first person
that she saw wearing a watch, and the teenage girl with braces and
bright blue eyes smiled up at her as she answered. “Thank
you.” Morgan smiled in return, and tried to do the time
difference in her head as she pulled her bags to the nearby lobby.
Once she was out of the way, she adjusted the time on her watch.
I
gained four hours.. no.. five.
She shook her head at the thought
that her body, however, didn't get the memo, as it still felt like it
should be close to three in the morning.
Ten o'clock at night is
still... night.
She yawned as she sat, and hoped that her client
would be willing to let her sleep when they got to his house.

The
flight was long, but Morgan had spent the entire time thinking and
worrying about the new addition to her ring finger. She had narrowed
down the list, added to it, re-narrowed, re-added, and finally gave
up to get some sleep. Unfortunately, worrying and thinking with her
eyes shut didn't count as sleep, and the girl was paying for it as
she sat in the lobby waiting for Ian.

I
just want to do my job... why.. why the freaking issues and worry?
Damn it! I'm honest with all of them! Why the games?
She felt
her cheeks warm as her temper began to simmer under the surface of
her every thought. Her cool hands went up instinctively to the sides
of her face, and she closed her eyes to help herself calm down.
I
don't interfere in your work, not one of you! Not ever!
Morgan's
curiosity about the ring had moved to near rage in the few moments
that she rested in the lobby, and that in itself added more heat to
the bubbling inferno within.
I'm so fucking tired of meeting a
client like this! Angry, sad, confused, or whatever the fuck else
you assholes throw my way! Not now... not ever again!

Through
the anger, and the realization that she couldn't meet Ian in the same
manner that she had met Diego, her heart reminded her that it was
still three AM and it probably wasn't the best time to have a life
changing moment.
Maybe it is. Maybe it's time to set new
boundaries and put myself first for a change.
Morgan ran her
hands through her long hair, and let out a long slow breath to clear
her head. Her journey had taught her many things, but at that
moment, something changed in her heart that would bring the largest
leap of maturity thus far.
They are
in
my life, they are
not
my
life.

Her
hands dropped from her hair, and her eyes opened quickly. She had
just spent over fourteen hours trying to figure out how she would
solve the mystery. That moment, however, the thought that she should
have had all along finally came forth. She had never asked for the
mystery ring game, so why was she playing? The ball was still in
their court, whoever it is, and she planned to sit back and let it
play out without her.
Right now, mystery man, you're laughing and
wondering how I feel. Well.... how will you feel when I never
mention it? Will it still be entertaining when you secretly try to
figure out of it was even delivered? Yep, laugh it up now, buddy....
but the joke will soon be on you.

Three
in the morning suddenly didn't feel so late, and her mood was just as
quickly back to normal. Better than normal, and she was on her feet
and looking for her next client with a new feeling of determination
to enjoy each moment of her life as much as possible. If the men
wanted drama, they could have it, but she planned to take a much
higher road from then on.

Morgan
ran her fingers through her hair again and she hoped the long trip
hadn't made her look as tired as she felt.
One of these times,
I'll actually look
and
feel good when I meet a client.
She
sighed again, but it wasn't filled with the same heavy feeling as
before, it was simply a sigh of anticipation.

“Morgan?!”
The deep voice came from behind and her fingers tangled in her hair
as she jerked her hand with surprise. She quickly worked out the
knot, then flattened the mess and turned around slowly to meet the
man who'd just spoken her name.

“Sorry,
didn't mean to startle you,” Ian walked behind the three chairs
separating the two of them, then came to stand in front of her.

“It's
alright,” she smiled warmly in return and flattened her hair
once more.
This is going to be more than alright. Holy shit.

“Morgan?”
he asked again and she shook her head with a small laugh, realizing
she hadn't answered him.

“Yeah,
that's me. Nice to meet you, Ian,” she stood and held her hand
out for the man. He grabbed it, then leaned in and gave her a quick
kiss on her cheek.