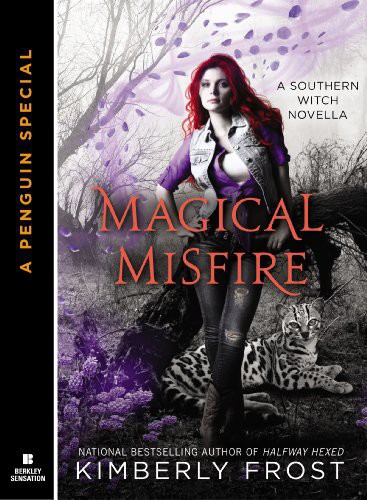 A Special from Berkley Sensation

A Berkley Sensation Special / published by arrangement with the author

The “B” design is a trademark of Penguin Group (USA) LLC.

The trouble with transporting doll-sized human beings in a Barbie carrying case across Texas is there’s just no good explanation if you get caught. That’s why I should not have been breaking three laws on the open road.

“Oh no!” I cried, spotting the twirling flashers atop the state trooper’s cruiser. “Was I speeding? Isn’t the speed limit seventy?” I glanced at my speedometer. Seventy-two miles per hour and falling. The second I’d seen the trooper, my foot had jerked off the gas pedal as if it were on a hot burner, but I bet he’d clocked me doing seventy-five. That was broken law number one.

“Hellfire and biscuits!” I snapped, glancing to the backseat where the carrier case sat. The lid was unlocked so the occupants could sit up from time to time, which left me vulnerable. I had not planned on getting pulled over. I blame that on the International House of Pancakes.

I’d spotted an IHOP billboard advertising cheesecake pancakes and my foot had turned to lead. My subconscious felt that cheesecake as a breakfast food was long overdue and that I should proceed immediately toward those designer pancakes. I momentarily forgot the ticking time bomb in the backseat.

When law enforcement approached the car, the pair of doll-sized divas might, at any moment, raise the case cover and tell the trooper I’d hexed them and kept them prisoner. That sounds like two broken laws, but technically there are no laws against shrinking your enemies and carrying them around in a pink Barbie carrying case. That much I know for sure.

I didn’t kidnap them, either. In point of fact, they’d attempted to kidnap
me
and had been darn unpleasant about it. Forced into taking steps, I’d tried a magic spell, just to defend myself. The next thing we all knew, I’d whammied them into a whiskey bottle. It was pretty surprising.

Also surprising was that after twenty-two attempts with the help of an expert wizard, no spell that I’d tried had turned them back to normal size. The best I’d been able to accomplish was to increase their size from bite-sized to Barbie-sized, which is why I’d felt compelled to keep them captive, which as you might know, is illegal. So on the Saturday afternoon in December when the trooper pulled me over, holding my tiny enemies prisoner was broken law number two.

“Mercutio, jump in the back and sit on that case. I can’t have Jenna and Lucy getting out while I’m talking to the Texas trooper. Hurry!”

Mercutio, my cat, surveyed me skeptically. A few hours earlier I’d kept Mercutio from eating the pint-sized occupants of the case. They’d been trying to escape their current residence, a Barbie Malibu Dreamhouse that I’d paid more than a hundred dollars for.

Since they were small and sneaky, Mercutio considered them fair game. He hunted them by instinct, and it was only luck that I’d spotted Lucy’s dark head poking out from behind the periwinkle living room drapes at the same time Merc stalked over to pounce. It had been a day of close calls.

I looked at Merc, who hadn’t moved from the passenger seat.

“Mercutio! C’mon! The police will take me to jail. Seriously. I’ll be locked up and they won’t let you visit. They might try to lock you up, too. But not with me.”

Jenna and Lucy had perhaps heard my raised voice because the case twitched on the seat and the lid lifted an inch.

I chewed my lip nervously. I couldn’t keep driving like I hadn’t seen the lights. That might make the officer angry and suspicious.

“Merc!” I said, pulling onto the shoulder and turning off the engine.

Mercutio relented, springing into the backseat and pouncing on the case. The cover thumped down as faint squeaks of fury came from beneath. Mercutio curled up on the case, covering it completely.

“Um, Mercutio? Remember how you’re an ocelot? It’s illegal in Texas to have an exotic pet. Not that I own you. Nobody does!” I tucked my hair behind my ear as the door of the police cruiser opened. “But a state trooper won’t understand about you being my friend rather than my pet.”

Merc cocked his striped head and fixed his big eyes on me.

“So, you know, pretend to be tame. And look . . . small.” Having an ocelot copilot was broken law number three.

I licked my lips and rested my weaponless hands on the steering wheel in plain view. No digging in the glove box or my purse, not even for my driver’s license, until the cop gave the word. I used to be married to a deputy. It makes them twitchy when someone they’re confronting about a crime starts reaching for something.

“Evening, ma’am,” the trooper said. He was a short bull of a man in his thirties who smelled of tangy aftershave and cigarettes.

“Where are you headed in such a hurry?”

“Long drive. Why are you going there?”

To find a dead harlot
, I thought. “To attend the Dickens on The Strand festival,” I said. It wasn’t a flat-out lie. I did have to go to the festivities to meet a ghost named Sally O’Shea.

“Is that this weekend?”

“Let me see your license.”

I gave it to him. His gaze moved to the rear of the car.
Don’t look in the backseat. Don’t look— Shoot!

“What kind of cat is that?”

The trooper made an “I don’t care for cats” noise, wrinkling his nose. “I’ve got a dog.”

“Dogs are nice, too. What kind do you have?” I tried to draw his attention back to my face.

“Mutt,” he said, glancing down at my license.

I fidgeted in my seat. Merc laid a paw over the side of the case that bumped under him. I heard a faint squeak, and my breath froze in my throat. Merc meowed to cover the noise. The trooper glanced at Merc. My heart thudded hard enough for the pounding to echo in my ears.

Be quiet, Jenna and Lucy. This whole trip is to help you. If you get me thrown in jail for shrinking you, I’ll be so mad.

The trooper handed me my ID. “When I ran your plates, the computer said you were arrested not too long ago.”

“The charges were dropped,” I blurted, a flush staining my cheeks.

“What were you arrested for?”

The computer might already have told him, and I couldn’t see the point in lying about it.

The corners of his mouth twitched. “I bet there’s a story there.”

I nodded. “Not a very good one. I hope you’ll be a gentleman and let me avoid telling it.”

He studied my face a moment. “You sure it was indecent exposure?” he asked. “Not too often a pretty girl gets cited for that.” His eyes traveled over my T-shirt.

My muscles tightened, anticipating trouble. I’m from a small town, but we’ve got plenty of lawmen and they’re all good. But that doesn’t mean every man with a badge deserves one.

“Yeah, it surprised me and my boyfriend, too. He’s a deputy.” Technically Zach was not my boyfriend. He had been until I’d married him and then divorced him. So now everyone called him my ex-husband, even when I dated him.

The deputy raised his eyebrows. “A deputy? Where at?”

“Duvall, huh? Y’all have had some incidents out there lately.”

Yikes, what had the state troopers heard? My heart kicked up a fuss in my chest. I licked my lips and shrugged. “Yeah, bad weather.”
And bad witches.

“If I let you off with a warning, you’ll drive the limit the rest of the way?”

He nodded, wished me a good trip, and returned to his car.

I exhaled, gripping the steering wheel hard. “Oh. My. Gosh. I am not cut out for this! Breaking one small law, okay,” I said and dug through my purse for a couple of Hershey’s Miniatures to settle my nerves. “Or even two, maybe.” I tore the wrapping off a Krackel, popped it in my mouth, and chewed madly. After swallowing, I said, “But facing a strange trooper while trying to cover up a felony? No,” I said. “A girl’s got to draw the lawbreaking line somewhere.”

It was twilight when I reached the island, and the festival was in full swing. I parked and pulled my luggage from the trunk. Lots of people walked by, a few glancing at Mercutio curiously.

On the Strand, a historic street, costumed people raced mattresses on wheels down the road while the crowd cheered. Everyone was having so much fun, I was tempted to stop and watch, but instead I convinced Mercutio to hide in my duffel. I needed to smuggle him into the hotel.

The Turkey Wore Satin by J.J. Brass
Amazonia by Croft, Sky
What's In It For Me by Nelvie Soliven
This Christmas by Jane Green
On the Outside (Caught Inside #3) by S. Briones Lim
Last Vamp Standing by Kristin Miller
Taffeta & Hotspur by Claudy Conn
A Vision of Loveliness by Louise Levene
Boots and Buckles by Myla Jackson
The Shadow of War by Stewart Binns