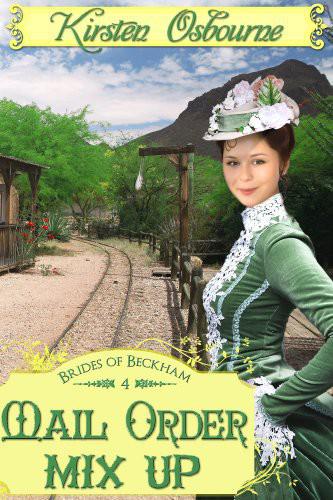 Book
Four
in the Brides of Beckham

This ebook is licensed for your personal enjoyment only. This ebook may not be re-sold
or given away to other people. If you would like to share this book with another person,
please purchase an additional copy for each recipient. If you're reading this book
and did not purchase it, or it was not purchased for your use only, then please return
to smashwords.com and purchase your own copy. Thank you for respecting the hard work
of this author.

When Ellen and her sister, Malinda, are forced out of the only home they’ve ever known
by a local banker after the death of their father, they answer an advertisement placed
by Harriett Long for mail order brides. Ellen chooses to marry the sheriff of a small
town in Colorado while Malinda agrees to marry his brother, a banker. When they arrive,
each sister is immediately drawn to one of the brothers….too bad it’s the wrong one!

Ellen Bronson washed the last dish straining her mind to come up with a way to get
money to come up with more food.  She and her younger sister, Malinda, were down to
their last pot of beans.  There was just enough corn meal for one more pan of corn
bread, and then they had nothing.

When their father had died just two weeks before, they’d been convinced that they’d
find where he’d hidden the money
he’d saved
, but the more they searched the more despondent they became.
They’d finally come to the conclusion that there was no money to be found.
They’d always lived a good life, albeit a simple one living on the outskirts of Beckham,
Massachusetts on a small farm.

The two sisters had continued to milk the cows that kept their dairy farm afloat,
but the dairy told them they’d already paid their father in advance for the entire
month.  It was the fifteenth, and they had no money, and as far as Ellen could see,
no way to get more.

Malinda put away the bowl and put it in the cupboard.  “What are we going to do?”

Ellen shook her head despondently.  “I have no idea.  Dad always kept up with the
money.  He never even discussed it with us, always just saying it wasn’t something
we should be worried about.”

The two sisters were both slim with dark hair.  Ellen’s hair was a medium brown, while
Malinda’s was so dark it was almost black.  Ellen had grey eyes, exactly the color
of a dark cloud just before a storm.  Malinda’s eyes were a brown that always seemed
to be filled with laughter.  The two sisters were only eleven months apart, with Ellen
being the elder.

Because they had lost their mother at a young age, they had grown closer than most
sisters and tended to do most things together.  Ellen was the natural leader between
them, not only because she was slightly older, but because she actually enjoyed doing
the work around the farm.  Malinda would rather curl up with a good book than clean
the house, but she always helped when asked.  Together they’d worked to keep the farm
going since their father had died.  Just a couple more weeks and they would have some
money again, and be able to buy more food.  They could make it.  They just had to
tighten their belts a bit.

“I know.  But now I’m getting worried.  Should we go see the man at the bank and see
if he had some money there for us?”
Malinda asked.

“He always said the safest place to keep your money was in your own house.  He didn’t
trust bankers. There’s no way he’d have had a bank account and not told us about it.”

Malinda leaned against the cupboard drying her hands on her apron.  “I know.  I just
don’t know what else to think.”

“I don’t either.”
Ellen
sighed heavily, looking around the kitchen.  “I guess we need to find something to
sell.  I’ve looked for a job in town, but it takes both of us to get all the milking
done.  We only need to be able to find enough money for food for the next two weeks,
and then we’ll get paid again.”
Ellen rested her hand against her stomach, which was still hungry despite just having
eaten.  There was so little food left, she tended to take small portions for herself
claiming to not be hungry, so Malinda wouldn’t have to go without.

Malinda looked out
the
open window with the blue checked curtains that fluttered in the June breeze.  “There’s
someone here in a fancy black carriage!”

Both sisters removed their aprons and stepped outside.  Ellen brushed her hair away
from her face and looked up at the tall middle-aged man in front of her.  His salt
and pepper hair was groomed immaculately.  “May I help you?” she asked.

“Are you Ellen and Malinda Bronson?”

“I’m Jacob Baxter.”
He brushed some dust off of his immaculate black suit as if he were too good to
even be standing on a farm.

They stared at him blankly for a moment.  He seemed to think they’d know who he was
so Ellen said, “I’m sorry.  I don’t know who you are.”
She did know he wasn’t someone she liked, though.  He obviously thought he was much
better than she and her sister.

“I’m the manager of the bank in Beckham.  Your father never mentioned me?”

What is he doing here?  And how did he know my father?  He surely would have mentioned
if he’d had business with the bank in town.

“I was afraid of that.  Your father took out a loan a few months back to buy some
more cattle.  Did he mention that to you?”

“No, sir.”  Ellen looked at the man skeptically.  “Do you have proof?”

He pulled a document out of the briefcase on the front seat of the carriage.  “Everything
is right here.  You’ll see he signed it at the bottom.”

Ellen skimmed over the document which said the farm and everything on it would revert
to the bank in the case of John Bronson’s death.
Why would he sign this?

Her eyes met the bankers.  “Everything reverts to the bank?  What about our house?
Our furniture.”

The man shrugged.  “It all belongs to the bank now, and has for two weeks.  We’ve
allowed you to stay so you had time to make other arrangements.  I gather you haven’t
done that?”
He looked disgusted that the two young women hadn’t done anything to plan for their
future.

Ellen shook her head.  “We had no idea we should make other arrangements.  May we
have another week or two?”
What they could do in that amount of time, she had no idea, but it would be something.

Mr. Baxter sighed.  “I’ve already given you longer than I should have.”  He looked
around at the
rundown farm
.  “I’ll tell you what.  It’s Tuesday.  You can have until Friday to find somewhere
to go, but then I’ll have to take possession.
I’ll even let you keep your clothes.  Nothing else, though.”  He climbed into the
buggy to leave, obviously not caring how they felt about having three days to leave
the only home they’d ever known.

“It’s all you have.  Good day.”  He picked up the reigns and drove back toward Beckham.

Ellen looked at Malinda.  “What
do
we do now?”

Malinda sighed.  “We need to find jobs and a place to live.  We’re old enough
to
work for wages.”
She kicked a rock toward the house.  “I don’t want to lose you!”

“You won’t lose me.  We’ll find a way to stay close enough to see each other.”
Ellen took a deep breath to prepare mentally for the task at hand.
“Well, there’s no time like the present.  Let’s go change into our Sunday dresses
and go to town.”

Ellen stepped back into the house.  “We’ll go to the mercantile, because there are
often notices for employment there, and we can pick up the paper.  Maybe there will
be something there.”  She paused after climbing the stairs and looked at her sister.
“I would like us to find something we can do together if possible.  I don’t want to
lose the only family I have left.”

Malinda hugged her sister.  “I don’t either.  We’ll find something together.  I know
we can.”

Both quickly changed and washed their hands and faces before making the short walk
into town.  When they reached the mercantile, they went to the back of the store where
the notices of people trying to sell things and people looking for employees were
posted.  The two sisters scanned through all the notes and found nothing.

They picked up a copy of the free paper and took it out to a bench in front of the
store sitting on the boardwalk and watching the wagons and buggies drive by on the
unpaved street in front of them.  Ellen found the help wanted section of the paper,
and since it was only two columns, read it silently, planning to read aloud if she
saw something helpful.  She reached the end of the column and sighed.  “There are
no jobs.  Only one thing that may be helpful, but I don’t think so.”
She made a face, not wanting to really consider the one thing.

“Well, something is better than nothing.  Read it, and we’ll decide together what
to do.”
Malinda looked at her sister eagerly, obviously hoping for something wonderful.

Ellen looked back down at the advertisement and read softly, “Mail Order Bride agency
needs women who are looking for the adventure of their lives.  Men out West need women
to marry.  Reply in person at 300 Rock Creek Road.  See Mrs. Harriett Long.”

Malinda looked at Ellen in surprise.  “Mail Order Brides?  Papa said we shouldn’t
marry until we were twenty one!”

Ellen nodded.  “I know, but I don’t think we have a choice.  Let’s go talk to Mrs.
Long and see what she says.  I don’t see how she could possibly find us somewhere
to go in just three days, but we’ll see what happens.  It’s better than sitting here
wondering what to do.”
Ellen really had no desire to be a mail order bride, because she was sure she couldn’t
find a man who would let her bring her younger sister along.

The sisters stood and walked to Rock Creek Road talking about the possibility.  “We
can’t stay together if we become mail order brides!” Malinda protested.

“I thought of that, but maybe there will be two men in the same area looking for wives.
If we live within an hour or two drive of each other, we’d at least be able to see
each other on occasion.”

“What do you think the chances of that are?”

Ellen laughed softly.  “Probably next to nothing, but it’s worth a try.  Anything
is worth a try, right?”
Ellen’s voice was desperately as she pled with her sister to at least try to talk
to the woman from the ad.

Learning to Swim by Cheryl Klam
Too Rich and Too Dead by Cynthia Baxter
The Love Knot by Elizabeth Chadwick
B.A.D by Caitlin Moran
Marcus Agrippa: Right-hand Man of Caesar Augustus by Lindsay Powell
Deadly Passion, an Epiphany by Gabriella Bradley
Future Imperfect by K. Ryer Breese
The Small Dog With a Big Personality by Isabel George
Tempest by Cari Z
The Alpha's Reluctant Mate by Williams, Morganna