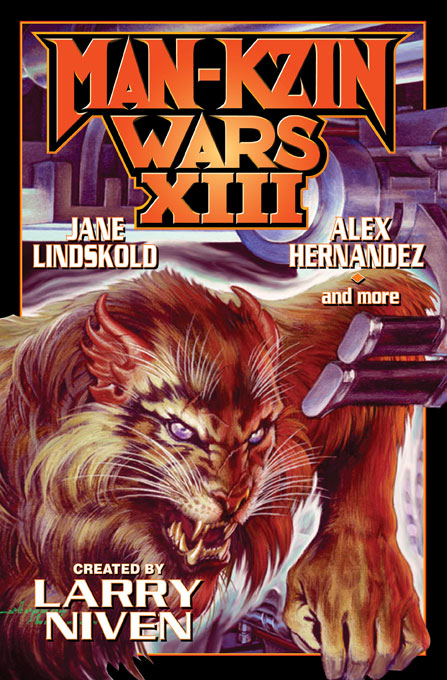 The Houses of the Kzinti

The Best of All Possible Wars

Oath of Fealty
(with Jerry Pournelle)

“Both sexes were sentient. They fought constantly.”

“And that funny religion on Altair One. They thought they could travel in time.”

“Yes, Sir, when we landed the infantry they were all gone.”

“They must have all committed suicide with disintegrators. But why? They knew we only wanted slaves. And I’m still trying to figure out how they got rid of the disintegrators afterwards.”

“Some beings,” said A-T Officer, “will do anything to keep their beliefs.”

—From
The Warriors
(recording salvaged

from the wreckage of kzin scout ship

by the crew of
The Angel’s Pencil
.)

The star known to human beings as Altair has a number of planets. Planets are, of course, as common as dirt, so no big surprises there. There are some rings of asteroids close to the star, and then a single planet in what human beings call the
goldilocks zone
. Not too hot, not too cold, but just right. The planet was eventually called Altair One by human beings, and something meaning pretty much the same by the kzinti. It is a planet similar to both Earth and Kzin in atmosphere, climate and gravity, so would be habitable to both species. It has, however, never been colonized. There are reasons for this.

One of them is the existence of an intelligent species, the Dilillipsans. They are, it has to be said,
different
.

If you asked any one Dilillipsan to choose a number between one and ten you’d get at least a thousand answers, and π would probably be one of them. Dilillipsans call their own world something which might be rendered, loosely, as
Glot
, a tiny fraction of a sound-name which is completely unpronounceable, and which translates, roughly, as
the place we know a bit about and are usually standing on or sometimes moving around on when young and foolish.

The acoustic part of the Dilillipsan language sounds something like the station announcements at the beginning of
Monsieur Hulot’s Holiday
played backwards, or perhaps sideways, and at double speed.
Monsieur Hulot’s Holiday
, incidentally, had been quite a favorite with the Dilillies once they began picking up Earth television transmissions, its tragic grandeur never failing to move them.

Some things they hardly believe at all, and some things they are almost certain about, but certainty is regarded as a mental health issue on Glot. They communicate with each other in five or six languages simultaneously, one involving generating three dimensional pictures on their stomachs, one involving chemicals that can smell bad, and two, or maybe three, involving making noises. It makes translating conversations just a little difficult. Note the delicate understatement in this remark.

Not many human spaceships or probes have passed near them, but some have been near enough for the Dilillies to eavesdrop on their communications, as they have on radio and television transmissions from Earth which is a mere fifteen light-years away. They have done this from curiosity, and without malevolent intent. Their knowledge of human culture is both broad and deep but their insights are fragmentary. The understatement in
that
remark is very far from delicate.

The hell with it. Language reflects culture and a way of perceiving the world, and the Dilillies are so different there’s no way of translating anything with any precision. So let’s just mangle everything shamelessly. Take it as a parable. Do what the Dilillies would do: believe everything, but not very much.

“You have to face it, those human beings are just so incredibly creative. I mean, what kind of wild mind would you need to have in order to be able to invent the hat?”

“No, shoes make sense. They have to walk around a lot and they have to walk on hard stuff like pavements and grass and they have very soft feet. So either they wear their feet out or they have some sort of protective cover for them. What I don’t understand is why it’s called
footwear
. It should be called anti-footwear.”

“Yes, they are not very logical. But I still rate the moustache without the beard as the most brilliant joke. I mean, first you go for hundreds of thousands of years growing hair on your face. Then you find a way to get rid of it. Then you get rid of all of it except for a little bit right under the nose. That’s absolutely brilliant. You couldn’t make this up, none of us could ever get close! But those human beings did it. They’re amazing!”

The three and a bit Dilillies brooded on this for a few seconds. They had been vastly entertained by moustaches for centuries now. It had started a topiary cult twice.

“I still think that there’s a reason for these things. One that we can’t easily grasp, but one that makes sense to them.”

“What possible reason can there be for a necktie?”

“Perhaps the top button is obscene. Perhaps the buttons are more and more disgusting as you go up, and the top one is so obscene it has to be covered by something.”

“They can’t be obscene in themselves. It’s only when they are put through the buttonholes. Of course! It must be a symbol for sexual activity! Unbuttoned top shirt buttons must be merely vulgar. And I think moustaches are worn to tell other human beings that the owner isn’t really a child or a female. Their young don’t have hairy faces, nor do the females usually. I think they mostly want to be mistaken for children, but some don’t. Either that or the males feel that the females will feel inadequate for not having hairy faces and they want to cheer them up. So they get rid of most of it, but the insecure ones leave a small bit to prove they are adults.”

“Hmm. You think the females suffer from Hairy-Face Envy. I suppose it’s possible. But then why don’t they all wear false moustaches like the leader of the Marxists?”

“I don’t think Groucho was the leader of the Marxists, just the most famous of them.”

The bit, which was very young, and bobbed around in a very distracting manner, asked, “Why do they all spend so much time running around? They even invented cars and aeroplanes to do it faster.”

“Oh that’s easy. If one of them wants to communicate with another, they have to move very close together. Or they had to until they invented mobile phones.”

They thought about this. It made sense. Sort of.

Coco was explaining his recent hobby activities to his friend John Wayne. There had been a fashion for human nicknames in their early years. These are not even remotely like their real names, each of which would run to several pages of text, a dozen cartoons, the sound of a waterfall crunching its gears and the contents of a Spanish
Farmacia.
The term
his
is also not exactly accurate, and
friend
refers to a relationship which on a scale from zero (meaning total loathing) to ten (meaning someone you have a psychotic fixation on and spend all your time stalking) would score approximately the square root of a matrix of imaginary numbers.

“A spaceship? Full of animals that look like tigers? Can I see them too?” John Wayne was thrilled. “Really see them directly, not just on your stomachs?” Ever since
The Greatest Show on Earth
, one of his favorite films, when the tigers escaped during the great train wreck, not to mention
The Jungle Book
, whose name had thrillingly romantic connotations for the Dilillies, John Wayne had wanted to meet a tiger. Since seeing
The Lord of the Rings
, he had wanted to meet a Balrog, but had accepted, reluctantly, that they would probably not make congenial passengers in a spaceship.

“Sure, it’s easy. The hielterober can take us there. They won’t see us, of course, although I’m working on that. I’m planning a new avatar, just for them.”

“Can I have one too? I’d love to have an argument with a tiger. But will it be possible? I’ve wanted to have arguments with humans, but they’re too far away. It would be difficult for them to remember the last move when it was a third of a century ago. The poor things don’t live very long.”

The Dilillies had been picking up Earth television signals for several centuries. They had discovered its entertainment possibilities with Adolph Hitler opening the 1936 Olympic Games and had never looked back. Whenever some Dilillies felt depression gathering, they’d look at one of the old war newsreels and laugh themselves out of it. Far funnier than Chaplin, and even sillier than
Star Trek
reruns.

“It should be possible, the tigers’ spaceships are fairly close. They’ll be here in a few weeks. It would be prudent to find out more about what they intend to do when they get here.”

“Bring on the hielterober; this I’ve got to see!”

Coco started the hielterober. It was something between a virtual reality body-suit and a huge wardrobe full of invisible fur-coats. After some cursing as he found the current location of the spaceships, Coco and then John Wayne stood, somewhat changed in size, on the bridge of the kzin warship
Far-Ranging Prowler
. The captain, his weapons officer and the alien technology officer were in conference before a very pretty view of space in general and Altair in particular. Coco felt intense pleasure as he looked at the oval outline of his sun. From Glot it could be almost any color, purple to crimson by way of bright pink, but from space it was brilliant white. And that green star next to it, that was Glot. A thing of beauty. He pointed this out to John Wayne, who was studying the kzinti with fascination. John Wayne was more of a people person.

“They don’t have much to say to each other, do they?” John Wayne whispered. “And it’s so slow.”

“Bandwidth limitations in the communication channels. Poor things. Very like human beings, I suspect, but with fur and bigger teeth. They only talk three languages at a time. But each language is handled by a different part of their nervous system and so what they wind up telling each other is anybody’s guess. Most of the time, the captain is telling everyone to be afraid of him. It’s not very interesting. And the others are telling him they
are
afraid of him, but it doesn’t seem to stop him. Perhaps he’s worried they might change their minds.”

“I’m glad you’ve got the translations fixed,” John Wayne commented. “There’s more going in on the making-growling-noises-at-each-other channel. I missed it at first, but the big one with the orange stripes is asking the medium-sized one with the spots whether they are close enough to detect any radio or television signals. They will be ever so disappointed! Can we go back and make some for them to detect? We could pass on the human World War II newsreels. They look as if they could do with a good laugh. Or we could send them my last poem.”