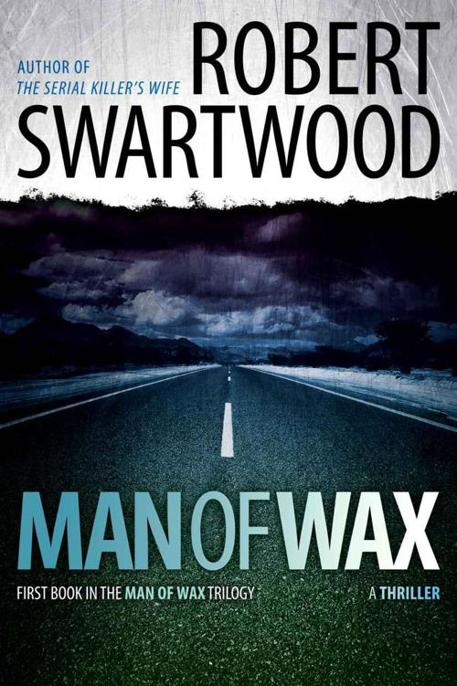 Ben Anderson goes to bed Sunday night, lying next to his wife in the comfort and safety of their Pennsylvania family home, to wake up the next day in a rundown motel in California — alone.

He doesn't know how he got there, he doesn't know where his family is, and written in dried blood on the bathroom door are the words LET THE GAME BEGIN.

Soon Ben is contacted by Simon. Simon knows all there is to know about Ben, more than he cares to remember himself.

If Ben wants to save himself and his family, he will have to do everything Simon says.

As the game begins — with stakes much higher than either man can imagine — no one knows where it will lead or how it will end.

Only one thing is for certain: this time the game will change everything.

“
Man of Wax
grabs you by the throat in the first chapter and never lets go. A suspense-filled thrill ride with plenty of shocks along the way. Read it!”

“The action gets pumped up through the roof.”

“Robert Swartwood is the next F. Paul Wilson—if F. Paul Wilson’s DNA was spliced with Michael Marshall Smith. If you haven’t yet read Swartwood, you’re missing out.”

Excerpt from
The Inner Circle

View the
Man of Wax
book trailer at
YouTube
.

To Holly, My Other Half

In the face of an overpowering mystery, you don’t dare disobey. Absurd as it seemed, a thousand miles from all inhabited regions and in danger of death, I took a scrap of paper and a pen out of my pocket. But then I remembered that I had mostly studied geography, history, arithmetic, and grammar, and I told the little fellow (rather crossly) that I didn’t know how to draw.

He replied, “That doesn’t matter. Draw me a sheep.”

That morning—the first day the game officially started—the ringing of a phone woke me.

It was a distant, unfamiliar noise that dipped its hand into the dark I’d been floating in and abruptly yanked me out. First I opened my eyes. Then I started to sit up but stopped. My head pounded. It was like a bad hangover only different, making me feel groggy, even shaky.

I waited a few seconds and then slowly sat up, swung my feet off the bed, and reached for the phone on the bedside table.

“Yes, hello,” said the exasperated voice on the other end. “This is your nine o’clock wake-up call.”

“My wake-up call,” I said, almost a question, but the person on the other end had already hung up.

I blinked and quickly stood up.

I was in some kind of motel room. This much was evident by the bed I had just been lying on, completely naked except for my boxers. The air conditioner must have been on high because I was cold, nearly freezing—a fact that came a few seconds later, as I was beginning to catch my bearings. Across from the bed was an old TV, sitting on a four-drawer wooden dresser. The curtains were slightly open, letting in some sunlight. In front of the curtains was a wooden table with an opened bible on top. Beside the bible was a pair of jeans, a plain black T-shirt, white socks, and a black leather belt. Underneath the table on the carpet was a pair of sneakers.

I realized I was still holding the phone. I placed it back down on the cradle, feeling a little more awake now but even more confused. Beside the phone was an alarm clock, its digital numbers glowing red. Without my glasses I had to squint to see that it read 9:05.

I took a step forward and leaned over the table and pushed the curtains aside. I squinted through the window at the parking lot beyond. Stepping back, I glanced down at the bible, noticed that its crusty pages had been opened to the Book of Job.

Still no answer. The only noise was the air conditioner blowing cold air from the rear of the room, right beside what had to be the bathroom. That door was closed. If my wife or daughter were anywhere, I thought, that was where they would be.

I started that way, my bare feet digging into the carpet. I hesitated outside the bathroom door, considered knocking, but then just turned the knob and opened the door.

I reached in, found the light switch, flicked it on.

There were fluorescents in the ceiling which blinded me, causing me to squint even more and shield my eyes with my hand. I took another step forward, leaving the coolness of the carpet for even colder tiles. The bathroom smelled strongly of chlorine. It was small and compact, with only a toilet, tub and shower, a narrow mirror and sink.

And on the sink was a pair of glasses. I grabbed them and put them on. They weren’t my glasses, not by a far stretch—they were too heavy, the frames thick, and they pinched around the nose—but they were my prescription. At least now I could see fine, I had that going for me, and even though I knew nobody was behind the shower curtain, I still pulled it aside to find only mildew spotting the tiles and drain.

That was when I turned and saw what was on the back of the door. Something skipped in my chest. In crude long letters that seemed to run because of the paint, someone had written:

I stared at it for a long time. The fluorescents above me buzzed quietly. My heart pounded in my head. I knew what the letters had been written in—some internal voice kept whispering it—but still I walked forward, slowly, until my face was only inches away. I reached out and hesitantly touched one of the letters before snatching my hand back.

The man behind the counter had a scarred face and short hair and looked both alarmed and irritated when I first stormed into the manager’s office. He wore a blue polo shirt with a name tag that said
KEVIN
, but to me he didn’t look like a Kevin. A beat-up TV sat on the table behind him, its screen fuzzy, its sound turned low, but still I caught glimpses of Matt Lauer doing an interview as I asked the clerk where I was.

“Are you serious?” he asked, and I recognized his voice at once as the one that had given me my wake-up call. The clock behind him, which continued to tick off the seconds, now read 9:10. “You checked in here last night.”

Kevin nodded. He reached below the counter and shuffled through some papers, brought out a credit card receipt. He placed it on the counter facing me and pointed down at the scrawled signature. “This is your name, right? I watched you sign it last night.”

It was then that I noticed a small calendar on the counter. According to it today was Monday. Yesterday I’d been home, with Jen and Casey, sitting in my recliner in the living room and watching football. Hadn’t I?

I shook my head, not understanding any of this. I remembered hurrying out of the motel room, spotting the manager’s office and sprinting across the parking lot. I remembered there had been sand on the pavement, the kind of sand we didn’t have in Pennsylvania. Then more images and sounds of the outside came floating back to me. Not just the sand, but tall grass, seagulls, the sound of the ocean. I could even smell it now, could feel the salt in the air.

“To be honest,” Kevin said, “you looked pretty out of it when you came in. I—well, I thought you might be drunk or something, but I couldn’t smell anything on you. You paid with your credit card and then asked me to give you a nine o’clock wake-up call.”

And here he slid the credit card receipt even closer, as if begging me to take it.

I didn’t take it, though. Instead I looked directly back at Kevin and said, “Where am I?”

Kevin gave me a strange look, realized I didn’t want the receipt, and took it back. Behind him,
The Today Show
had cut to a commercial.

“The Paradise Motel,” he said.

That strange look still hadn’t left Kevin’s face. When he spoke, his voice had become slow and nervous.

But I couldn’t think of anything else to say. I was wearing the clothes I’d found on the table, the clothes that weren’t mine but were my size. Even the sneakers were size eleven and fit just right. The glasses still pinched my nose and I adjusted them quickly, uncertain what else to do. None of this made sense but I knew that it was true, that somehow I was in California—a state I’d never once visited.

I said, “Where in California?”

“Sir, are you all right? Do you seriously not remember checking in last night?”

“Was I by myself?” I’d begun speaking in a clipped tone. “When I checked in. Was there a woman and a little girl with me?”

“Sir, maybe you should—”

Kevin stared back at me, his eyes now wide. I hadn’t meant to shout, but things just weren’t adding up, they weren’t making sense, and right now I didn’t know where my wife and daughter were, they were gone and I wanted them back.

“Listen,” I said, closing my eyes and placing my hands on the counter. I dropped my head and opened my eyes then, stared at the sneakers that weren’t mine. When I looked back up at Kevin, I could tell I’d scared him. In a slow and soft voice, I said, “Please. Just tell me this one thing. Was I alone?”

On the table behind the counter,
The Today Show
had come back, Al Roker now talking to the fans waiting outside the studio.