Read Man on a Mission Online

Man on a Mission 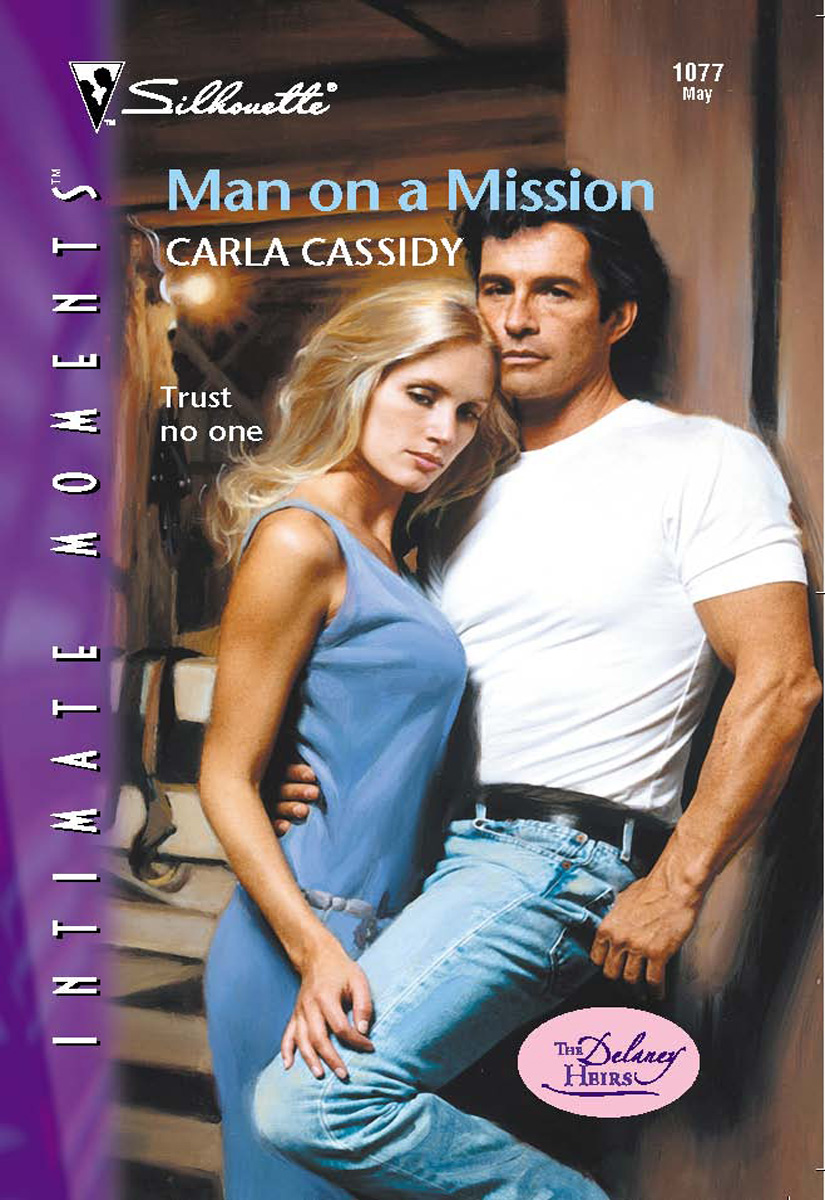 He wanted her. And though he knew little about her, he wanted her as he hadn't wanted a woman in a very long time.

But Mark knew he'd be a fool to follow through on the desire he felt for her. He was playing a role. He had a killer to catch, a ranch to save, and that had to take precedence over anything else in his life.

Most especially what he felt for April.

This is officially “Get Caught Reading” month, so why not get caught reading oneâor all!âof this month's Intimate Moments books? We've got six you won't be able to resist.

In
Whitelaw's Wedding,
Beverly Barton continues her popular miniseries THE PROTECTORS. Where does the Dundee Security Agency come up with such great guysâand where can I find one in real life? A YEAR OF LOVING DANGEROUSLY is almost over, but not before you read about
Cinderella's Secret Agent,
from Ingrid Weaver. Then come back next month, when Sharon Sala wraps things up in her signature compelling style.

Carla Cassidy offers a
Man on a Mission,
part of THE DELANEY HEIRS, her newest miniseries. Candace Irvin once again demonstrates her deft way with a military romance with
In Close Quarters,
while Claire King returns with a
Renegade with a Badge
who you won't be able to pass up. Finally, join Nina Bruhns for
Warrior's Bride,
a romance with a distinctly Native American feel.

And, of course, come back next month as the excitement continues in Intimate Moments, home of your favorite authors and the best in romantic reading.

Man on a Mission
CARLA CASSIDY

Strangers When We Married
#1046

“Devil and the Deep Blue Sea”

Getting it Right: Jessica

has written over thirty-five books for Silhouette. In 1995, she won Best Silhouette Romance, and in 1998, she won a Career Achievement Award for Best Innovative Series, both from
Romantic Times Magazine
.

Carla believes the only thing better than a good book to read is a good story to write. She's looking forward to writing many more and bringing hours of pleasure to readers.

“H
ow's he doing?” Johnna Delaney asked, her voice a hushed whisper in the hospital room.

There was a long pause. “It's too early to tell. He took quite a blow to the head. There's a possibility he might have suffered brain damage.”

Their voices drifted away, letting Mark Delaney know they had left his hospital room. He opened his eyes and turned his head toward the brilliant morning sun dancing into the window.

For the first time in the four days since he'd been brought into the hospital with a severe head injury, he felt completely lucid.

And with the lucidness came memories. Marietta
passing him a note in secret. “Meet me at the barn at midnight tonight. It's important.”

And he had met her at the barn at midnight. The moon had been full as he'd stood just outside the barn awaiting her approach. He couldn't imagine what the pretty social director on his family ranch wanted to discuss with him. All her dealings were usually with his father, Adam.

He saw her then, hurrying toward him. “Hey, handsome,” she said, greeting him in her familiar fashion, but her trademark smile was absent, replaced by a frown of worry.

“Hey, gorgeous,” he responded. He and Marietta enjoyed an easy, flirtatious relationship based on the mutual knowledge that there was no real chemistryâother than friendshipâbetween them.

“Thank you for meeting me.” She reached a hand out for his, as if she needed the physical contact. Mark realized as he gripped her hand that it wasn't just worry that darkened her eyes, but fear.

“Marietta, what's wrong? What's going on? Why did you want to meet out here in the middle of the night?”

“I don't want anyone to know I've spoken with you.”

“Spoken with me about what?”

“Before I say anything, you have to promise me something,” she said.

“Promise me you won't say anything to anyone. Not your brothers, not your sisterâ¦nobody.” She squeezed his hand tightly. “I don't know who to trustâand I don't know who you can trust. I'm taking
a chance in trusting you, but I have to say something to somebody.”

“Promise me,” she repeated fervently.

“Something bad is going on here at the ranch. Something very bad.”

“What do you mean âbad'?” Mark pressed. “If it's something illegal, we'll go to Sheriff Broder.”

“No! I'm not sure that he's not involved,” she protested. “I've heard whispersâ¦rumors. What they're doing is wrongâ¦illegal and eventually will destroy us all.” Her voice rose hysterically with each word.

Mark released her hand and grabbed her by the shoulders. “Marietta, calm down. Now, tell me who is doing what?”

He saw her eyes widen and fill with sheer terror. Before he realized what caused her fear, he felt a blow to the back of his headâone second of excruciating pain, then complete and total blackness.

Mark now pulled himself up to a sitting position in the hospital bed, rage battling with grief as he thought of the events that had led to his hospitalization and Marietta's death.

Somebody had killed her and tried to kill him. Somebody had sneaked up behind him and silenced Marietta before she could tell him exactly what was going on.

He tossed back the covers and stood, pleased to discover no headache and no unsteadiness as he made his way across the room to the window.

In fact, what he felt more than anything was a re
lentless energy, a need to get out of this hospital and find out what secret Marietta knew. The secret that had gotten her killed.

“Mark!” He whirled around to see his brother and sister standing in the doorway. “You're up. Thank God.” Matthew stalked across the floor and peered at him intently. “How are you feeling? You doing okay? Everyone has been really anxious to talk to you, to find out what happened.”

Promise me.
Marietta's words spun in Mark's head.
Promise me you won't say anything to anyone. Not your brothers, not your sisterâ¦nobody. I don't know who to trust.

“Can you tell us what happened?”

He sensed the intensity in Matthew's voice, and suspicion bloomed. What
was
going on at the ranch? Who was involved? Marietta had said it was bad, illegal. She'd implied he should not trust not only his own family but the sheriff, as well.

Mark raked a hand through his hair, unsure how to reply.

“Stop it, Matthew,” Johnna said. “You're obviously upsetting him. We'll have time to talk when he's feeling stronger.”

“I feel fine,” Mark said, his mind working to assess how best to handle the entire situation. He needed to buy some time, needed to think about what had happened, the things Marietta had implied.

Brain damage.
The two words flirted around the edge of his subconscious. Perhaps he could buy himself a little bit of time, pretend his brain wasn't work
ing quite right, until he could figure out exactly what was going on.

Trust nobody. Not his family, not law enforcement. Marietta's words haunted him, and he knew he was on his own to find out what was going on at the ranch and who had killed her and why.

The Haunted Season by G. M. Malliet
At the Break of Day by Margaret Graham
Rogue Raider by Nigel Barley
Shardik by Adams, Richard
Ultimate Prize by Lolita Lopez
Cross Off by Peter Corris
For Your Paws Only (Supernatural Enforcers Agency #2) by E A Price
Honor Reclaimed (All About Honor) by Reagan, Kathleen
His Work Wife by James, Sapphire
iBoy by Brooks, Kevin