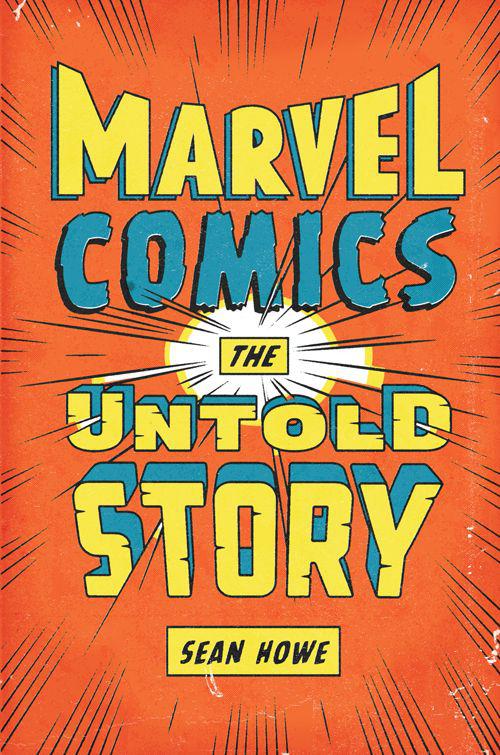 To the Merry Marvel Bullpen

In the beginning Marvel created the Bullpen and the Style.

And Marvel saw The Fantastic Four. And it was good.

Ideas can never be traced to any one source. They are tossed back and forth between people until the decision makers step in and choose what they think is a success formula.

Part I: Creations and Myths

Part II: The Next Generation

I
n 1961, Stanley Martin Lieber was pushing forty, watching the comic-book industry, in which he’d toiled for over two decades, fade away. Recently forced to fire his staff of artists, he sat alone in the comics division of publisher Martin Goodman’s perfunctorily named Magazine Management Company, where he’d been hired, as a teenager, at eight dollars a week. He’d once wanted to be a novelist, but he never managed to get around to it, and it seemed unlikely that he’d be able to work Big Ideas into the monster, romance, and western comics that were still dribbling out from the vestiges of the company. Tucked away in a quiet corner, the highlights of Lieber’s days were writing corny jokes for toss-off humor books like
Blushing Blurbs: A Ribald Reader for the Bon Vivant
and
Golfers Anonymous
. Not wanting to use his real name, he signed them “Stan Lee.”

F
ate intervened (or so the story went) in the form of a golf game between Martin Goodman and Jack Liebowitz, publisher of rival publisher DC Comics. Liebowitz reportedly told Goodman that DC had thrown together some of its most popular characters—Superman, Batman, Wonder Woman, Green Lantern—into a single supergroup title,
The Justice League of America
, and found itself with a surprise hit. Goodman marched into the office with a mandate for Lee:
steal this idea and create a team of superheroes
. But Lee had been through attempted superhero revivals before. He went home to his wife, Joanie, and announced that he was finally going to quit. She talked him out of it. “Just do it the way you want to,” she insisted. “Work your ideas into the comic book. What are they going to do, fire you?”

“It took a few days of jotting down a million notes,” Lee would remember years later, “crossing them out and jotting down a million more until I finally came up with four characters that I thought would work well together as a team. . . . I wrote an outline containing the basic description of the new characters and the somewhat offbeat story line and gave it to my most trusted and dependable artist, the incredibly talented Jack Kirby.”

That was how Stan Lee recalled the genesis of
The Fantastic Four
, and how he related it over and over again through the following decades, in his inimitably jaunty manner. Jack Kirby, who’d launched to stardom in the 1940s, when he’d co-created the iconic Captain America for Goodman, would later tell it differently. “Marvel was on its ass, literally, and when I came around, they were practically hauling out the furniture,” Kirby said. “They were beginning to move, and Stan Lee was sitting there crying. I told them to hold everything, and I pledged that I would give them the kind of books that would up their sales and keep them in business.”

This much is certain: in the middle of 1961, Lee and Kirby threw together twenty-five pages of story and art, attached a crude logo, and thousands of copies of
Fantastic Four
#1 were shipped off to take their places on newsstand tables and spinner racks across the country, wedged between the latest issues of
Millie the Model
and
Kid Colt Outlaw
.

T
he Fantastic Four
wasn’t quite the
Justice League
rip-off that Goodman had ordered—in the first issue, the protagonists didn’t even wear costumes; stranger still, they were constantly bickering. Never before had a comic-book team been shaded with such distinct personalities. In a nearly revolutionary flourish, the Thing was even conceived as “a heavy—not really a good guy,” who might go rogue at any moment, a far cry from the upstanding citizenship of Superman and Green Lantern. But copies sold, quickly, and fan letters poured in to the Magazine Management offices. The book had sparked something, a fervor unfamiliar to Lee.

Lee and another of the monster-comics regulars, artist Steve Ditko, soon introduced “Spider-Man,” who behind his mask was just Peter Parker, an angsty teenage nerd who sometimes struggled to make good choices. A moody, outcast kid as a superhero? It had never been done. But Spider-Man, too, struck a chord with readers.

Magazine Management quickly cranked out more off-kilter creations, heroes with just enough moral ambiguity for Cold War children in the last moments before Lyndon Johnson and the Beatles. In a matter of months, they introduced a test-site researcher metamorphosed by radiation into a violent green beast, a crippled physician transformed into the God of Thunder, an arms dealer with a heart condition who built a metal suit with which to fight communists, and a washed-up, egomaniacal surgeon who found his true calling in the occult. Heroes with feet of clay, many of them were marked by loneliness and self-doubt. Even the more confident among them carried the knowledge that they didn’t fit in with the rest of the world.

Lee and the small stable of middle-aged freelance artists, plugging away in a medium that was ignored or ridiculed by most of society, were, in their way, misfits, too. But their work began to attract and foster a dedicated community of admirers. It was a fellowship that existed below the radar of media attention, at first, without even a name to rally around: Goodman’s comics line, once best known as Timely Comics, was published under dozens of different nearly anonymous company names, from Atlas to Zenith, visible only in the small print of the copyright notices. Finally, at the end of 1962, Goodman and Lee settled on branding their reinvigorated line as Marvel Comics.

M
arvel’s colorful creations—the Fantastic Four, Spider-Man, the Incredible Hulk, Thor, Iron Man, and Doctor Strange—built the groundwork for a self-contained fictional construct called “The Marvel Universe,” in which all heroes’ adventures were intertwined with great complexity. Soon their rapidly expanding world also included the likes of the X-Men, a gang of ostracized mutant schoolchildren whose struggle against discrimination paralleled the civil rights movement, and Daredevil, a blind lawyer whose other senses were heightened to inhuman levels. The Black Widow, Hawkeye, the Silver Surfer, and countless others followed. For twelve cents an issue, Marvel Comics delivered fascinatingly dysfunctional protagonists, literary flourishes, and eye-popping images to little kids, Ivy Leaguers, and hippies alike.

In 1965, Spider-Man and the Hulk both infiltrated
Esquire
magazine’s list of twenty-eight college campus heroes, alongside John F. Kennedy and Bob Dylan. “Marvel often stretches the pseudoscientific imagination far into the phantasmagoria of other dimensions, problems of time and space, and even the semi-theological concept of creation,” one Cornell student gushed to the magazine. “They are brilliantly illustrated, to a nearly hallucinogenic extent. Even the simple mortal-hero stories are illustrated with every panel as dramatically composed as anything Orson Welles ever put on film.”

Stan Lee addressed Marvel’s audience colloquially and excitedly in the comics’ back pages, making readers feel like they were part of an exclusive club. Although most of the stories were produced in the silence of freelancers’ homes, Lee painted the drab Marvel offices as a crowded and chatty “House of Ideas,” a throwback to the bustling, desk-filled rooms that he’d known in earlier years but that now existed only in his mind. With a jazzy string of
didja know
s and all-caps accents and exclamation-point backslaps, Lee’s “Bullpen Bulletins” columns could confer excitement even on the very idea of a workplace. “It isn’t generally known, but many of our merry Marvel artists are also talented story men in their own right! For example, all Stan has to do with the pros like JACK ‘KING’ KIRBY, dazzling DON HECK, and darlin’ DICK AYERS is give them the germ of an idea, and they make up all the details as they go along, drawing and plotting out the story. Then, our leader simply takes the finished drawings and adds all the dialogue and captions! Sounds complicated? Maybe it is, but it’s another reason why no one else can bring you that old Marvel magic!” Entranced readers, poring over every behind-the-scenes glimpse, soon learned the name of each contributor, from the inkers and letterers to the receptionist and production manager. When Lee started an official fan club—“The Merry Marvel Marching Society”—fifty thousand fans paid a dollar each to join. Like one of its own characters, the weakling underdog Marvel Comics had become a great American success story.

“I
t seems to work out well,” Stan Lee once wrote in a letter describing Marvel’s working methods, “although it’s not a system I’d advise anyone else to try.” The arrangement did have its drawbacks, especially as Lee ceded more and more of the plot development to the artists, some of whom began to feel they were doing the heavy lifting for less credit than they deserved. Steve Ditko, who’d imbued Spider-Man with melancholy soul and Doctor Strange with hallucinatory verve, left the company; Spider-Man and Doctor Strange stayed behind. Jack Kirby, who churned out, almost helplessly, a flood of ingenious costume designs, bone-rattling action scenes, and complex fables of secret alien races, exited—but the Hulk, Fantastic Four, and the X-Men remained.

The comic industry was still subject to cyclical downturns, though, and Stan Lee continued working feverishly, determined to never again sit in that corner cubicle. In the early 1970s, he and his deputy, a fan-turned-pro named Roy Thomas, plugged holes in the workforce with a new generation of creators, wide-eyed twenty-somethings who flashed their old Merry Marvel Marching Society badges as though they were licenses for breaking rules. Embracing what they remembered as the spirit of Marvel, they smuggled countercultural dispatches into the four-color newsprint that found its way to drugstore spinner racks affixed with friendly “Hey Kids—Comics!” signs. Lee hardly noticed. Martin Goodman had sold the company, and as soon as the new owners placed Lee in charge, he turned his attention to pursuing television and movie deals, which he saw as Marvel’s ticket out of the precipitous comics industry.

Over the following decades, as Lee pressed on with his quest for a Hollywood triumph, the reins of Marvel’s publishing passed between editors who struggled to negotiate artistic ambitions and a fickle marketplace, and between owners—from ragtag entertainment consortiums to billionaire corporate raiders—who were progressively hell-bent on maximizing the bottom line at any cost.

A
ll the while, a steady stream of writers and artists continued to arrive and depart, each contributing their own creations, or building on the creations of those before them. Everything was absorbed into the snowballing Marvel Universe, which expanded to become the most intricate fictional narrative in the history of the world: thousands upon thousands of interlocking characters and episodes. For generations of readers, Marvel was the great mythology of the modern world.

But the myth creators weren’t distant, long-dead Homers and Hesiods. They carted their own proprietary feelings about the characters and stories, and their own emotional and financial entanglements, which made passing through the company’s constantly revolving doors an arduous and sometimes painful process. As time wore on, there came a growing tide of failed friendships, professional defections, bitter lawsuits, and untimely deaths.