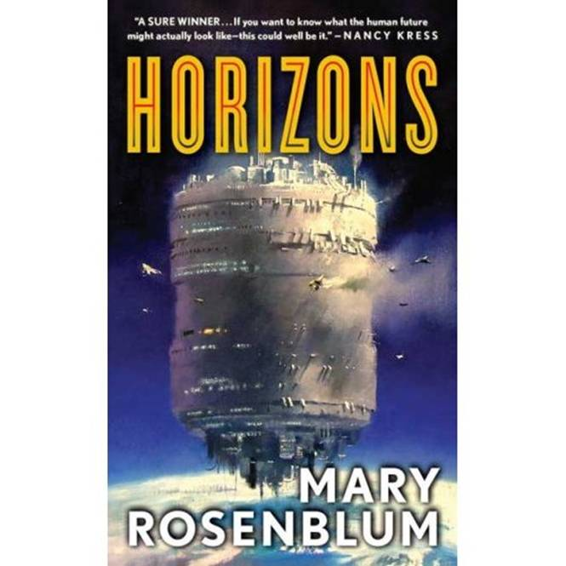 AHNI HUANG SHUT HER EYES AS THE SHUTTLE FROM THE Elevator matched spin with the main port of New York Up. Grief distracted you, could get you killed. The Platforms were alien terytory to her. She didn’t know the rules. The chairs swiveled as her limbs grew heavier, giving Ahni a vivid moment of nausea before up and down settled into place. Didn’t help that down had been up a moment ago. She drew a slow breath, dropping briefly into Pause until her heartbeat slowed and her biochemistry stabilized. You could control mammalian stress reactions, but like grief, you couldn’t entirely banish them.

All through the cylindrical cabin, seat-webs clicked and retracted and the clone-similar business passengers plus a couple of overdressed tourists smoothed wrinkles from their singlesuits and pulled bags from the storage bins beneath their seats. Ahni scanned the faces, senses heightened to the max now, watching for the telltale slide of an eye, the subtle edge in body language that would mark a hit or a tail.

Her brother’s assassins would expect her father to come for vengeance, but they would also be looking for any member of the Huang Family. Two natives on board. Their too-slender, almost fragile build gave them away. She watched them covertly as she pretended to fiddle with her bag.

Anticipation, resignation, fatigue, boredom… As a Class Nine empath, and a sensitive one, she was sure they weren’t acting.

So far so good. Ahni levered herself from the padded acceleration recliner, her stomach happy with the eighty percent Earthnormal gravity of the rotating can’s outer shell. She stretched, aware of the muscles cording on her small, lithe frame, wanting to go out and run for about six miles to work out the kinks from the long Elevator trip. They had a jogging path here in New York Up, but it required a Level Three tourist pass and she wasn’t staying in that kind of hotel. She slung her slightly scuffed business brief over her shoulder, looking like your basic mid-level Assist running the boss’s errands from the planetside business headquarters. She adjusted her body language to reflect mild boredom tinted with a bit of worry and slipped between a man with a polished gym physique and a lanky woman with natural Mediterranean genes—probably Turkey or Crete, Ahni guessed— and a taut driven face. Still on full alert, Ahni shuffled down the narrow aisle and out into Customs and Immigration.

It wasn’t much more than a wide corridor with a desk and gate barring it a dozen meters from the docking lock. Just enough space for a shuttle-load of bodies. No uniforms, no stun guns, but Ahni’s skin crawled with the knowledge that a half dozen beams and fields were probing every square centimeter of her skin and body cavities. Up ahead, a man with unselected Han features jolted to a halt, a look of surprise on his face that transitioned through annoyance to resignation. His com link, an earring that looked like a natural diamond, had just informed him that Security wanted to talk to him. With a small shrug, he turned and headed toward a panel that had slid silently open in the wall. A couple of people looked at him curiously. Ahni shrugged. He was innocent of anything, or thought he was. But according to Jira, the family’s information synthesist, China’s Dragon Home was squabbling with New York Up over tariffs. With his face, he wasn’t going to get where he was going on time.

The man in front of her passed through the gate. Ahni stepped forward at the agent’s nod, keeping her bored/apprehensive body language carefully in place, and adding a mental layer of worry about the LaGuardia account and the discrepancies in the inventory database, couldn’t wait to get this mess untangled and get back to terra firma… Empaths made good money working for Security.

chip. They’d match. The ID chip she had paid so much for was top quality.

“Haarevort, Jessica, from the Free State of Singapore, Pan Malaysia Compact, on business with East Asia Biologicals, threeday visa,” the cold-faced woman intoned, her eyes on the screen in front of her.

“Nothing.” Ahni gave her the absentminded and impatient smile of the “small Family” member, the seasoned businesswoman running minor Singapore Family errands that the database assured the Immigration agent that she was. She held the brief to the scanner, and it chimed in agreement that the luggage seal had been placed at the Palembang Elevator station and hadn’t been tampered with.

That had cost nearly as much as her ID chip.

The agent looked up to nod her through, the hint of a flaccid sag to her muscles suggesting that she lived high up toward the axle of the orbital, not down here in the highG outer layers of the rotating can that was NYUp. For a second her eyes flickered as she focused on Ahni’s face, and a small flare of indecision made her hesitate.

Ahni’s face was not Dutch Indonesian at all, but rather showed an unselected mix of Taiwan aboriginal, Han Chinese, and Polynesian genes in the planes of her face and tint of her skin. When she wore her hair long, it had a reddish cast in the sun, and a faint wave to the thick, unruly mass.

The woman gave the slightest of shrugs and waved her through, although her indecision still tainted the air like a whiff of perspiration. Too bad. Ahni put tired unconcern into her posture as she hoisted her bag to her shoulder. If someone asked, this woman might remember her. Not good.

She was here to kill. The World Council had granted the Taiwan Families Right of Reply.

Still in business mode, Ahni followed the stream of passengers through the last meters of Immigration and out into the Arrival Hall. She closed her eyes, murmuring her access code to her im¬planted link.

The screen lining her eyelids offered her a glowing map of the corridors opening into the Arrival Hall. The route to her Level Four hotel room glowed a neon blue, the others green. Fourth Level-close enough to the outer skin to have some gravity, far enough in to fit with her low-level errand-runner persona. She headed toward the elevator. Out here, on Level One, where all the tourist and business traffic came and went, the corridors were spa¬cious, lined with shops offering trinkets - fragile crystals grown in microG, asteroid fragments set in precious metals, spidersilk cloth¬ing, food, euphorics, VR and flesh entertainment. Tourists strolled along, business travelers hurried somewhere. The thin-looking na¬tives all wore service uniforms down here at this level. They weren’t curious, nor were they particularly friendly. A lounge with a vast window offered stars and a huge, blue-green slice of Mother Earth. Ahni halted in spite of herself.

She had never been off -planet.

Enormous against the endless black of space and the hard, bright glints of distant suns, the great blue sphere held her eyes. Down there, Xai had been born. And died. Grief lay like a stone in her heart.

Killing his killer would not bring him back. But this was war. Ahni smirked for Security’s everywhere eyes, shrugged and turned away, the seasoned business traveler for a moment beguiled by what might have been real, but was merely a digital image on a wall screen faked to look like a window.

A slip. Grief slowed you down. Boosting her senses to painful heights she left the lounge and crossed the crowded strolling spaces to the elevator, aware of every jostling shoulder and oncoming face. In the elevator, the floor numbers increased. Axle was up, skin was down. The floor pushed against her feet, but when the large car paused, she exited slowly, feeling as if she was walking on a trampo¬line. The other riders scattered from the lobby, comfortable in the di¬minished G. They vanished down corridors, intent, busy, not looking.

A tall, skinny man in a blue singlesuit, a genes elect Masai type, hesitated, frowning slightly at a personal reader, concentrating on something slightly irritating.

A tiny shard of intent pricked through that concentration static. Ahni reacted without thought, flinging herself down and to¬ward his feet, shoulders curling to roll. Displaced air feather-brushed her cheek as a dart skimmed past, then her roll caught him at the knees, out of control and sloppy in the lessened gravity. He flew over her back, his screen sailing to clatter against the elevator door. His head hit the wall with a dull sound. Ahni tried to continue her roll and failed. Different physics here! She slammed sideways against the wall, tasting adrenaline and blood, struggling to get her breath.

Nice setup. At this level, the elevator lobby apparently emptied quickly. Poison on that dart? No place to hide an unconscious body in these sterile residential corridors. She rolled him against the wall, tugged his singlesuit straight, arranged his limbs to suggest a nap, and strode briskly out into the corridor, her body language relaxed, senses straining. Eyes flicked past her in the hallway, not looking, not seeing, bodies brushed by. Time to disappear before Security got into the act.

He could have darted her easily, but he had hesitated. Why? Ahni ran her fingertips over her shoulder as eyes skimmed past her, unseeing. She found the slickness of the tiny pseudoskin patch, peeling it off with a sharp fingernail under the pretense of scratch¬ing a small itch. A trace of blood made her fingertips slippery as she squeezed the purchased chip from its shallow bed.

A tall woman with too-thin bones danced past her, humming to music playing in her head, naked from the waist up, a silver filigree of inlaid fiberlight decorating her full breasts, ringing her dark aure¬oles. The naked breasts startled Ahni in spite of her homework on NYUp customs.

Holos or flat graphics decorated residential doors. The images–starscapes, unicorns, strange flowers–had the look of addresses. Not many uniforms or business suits up here, above the tourist level.

Ahni turned down a connecting corridor, putting casual pur¬pose into her posture and stride, dropping for an instant into Pause to suppress the flood of corticosteroids into her bloodstream. With¬out breaking stride, she pressed the pseudoskin patch to a residential doorway decorated with holographic vines. If Security looked for Haarevort they’d find her loitering in this doorway. Ahni paused, closing her eyes to summon the map of New York Up from Data. She needed safety, time to drop into full Pause–access her personal AI–and figure out how things had gone so wrong so fast. And how to fix it. An ancient fairy tale sprang to mind, about a Muslim rabbit and an Israeli fox. About a thorn patch … The corridor walls up here curved into floor and ceiling without angles, covered with a fine fibered carpeting, tinted a soft, soothing green. She hadn’t passed a hotel room for some time now. All residential? She’d stand out–stranger. When she reached the next service bay, she slowed until the preoccupied woman in the neon green singlesuit and natu¬ral euro-mix face disappeared into a room. Then Ahni whisked into the bay and palmed the control plate next to the service elevator. It only took a handful of seconds for the network in her palm to ana¬lyze and override the lock. The door slid open and she stepped in. They’d expect her to go down to Level One, to the safety of gravity and Security. She overrode the controls, sent the car up. Past the residential levels, past the manufacturing and storage levels, clear to the axle.