Read Maverick Jetpants in the City of Quality Online

Maverick Jetpants in the City of Quality 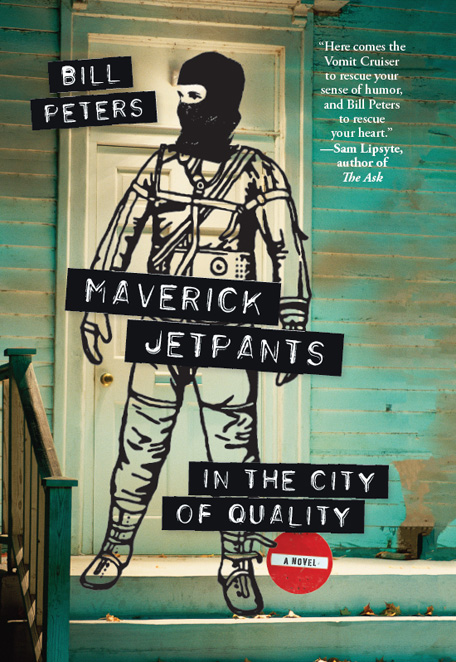 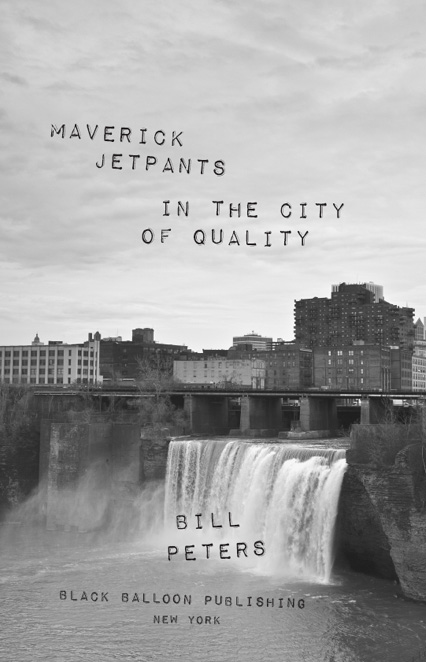 Pinning Bow Ties on the Dead

A Thing to Invest

The night before our friendship ends and the city burns down and the Colonel Hellstache begins forever, I change out of my Bills pajama pants into my Bills sweatpants and drive Mom's car into the snow crust to find Necroâmy last friend left even when I first met him. Past the Main Applebee's, past the Irondequoit Applebee's, past the Dollar Theater, I slow down to see if Necro's Vomit Cruiser is in any lot, anywhere, before giving up on Rochester's outside towns and heading to the city.

In a field along 490, the moon's reflection spreads out on a long layer of ice. Downtown, the skyline's five buildings are lit up and deserted. But my Joke Rolodex is stocked. I have one-liners Necro will totally crack up at if I find him tonight, jokes worth a Holy Grail Point for every message I've left on his Robot Voice Message Machine the last thirteen nights. In other words, 71 Holy Grail Points.

Down Monroe, past Mark's Texas Hots, where it's crowded enough to fog the windows but early enough not to need a
door guard, I keep driving. Past a man sleeping outside the theater entrance of Monroe Show World. Past the McDonald's That Is Sometimes Out of Hamburgers where, for a second, I think I see himâNecro's tall mantis-lankfest, his wreath of unponytailed hair, the cardboard-colored Necro Parkaâbut it's some frizz-haired lady, wearing snowpants and Reebok Pumps, standing at the drive-thru speaker, ordering.

So no Necro tonight. And when I can't find Necro, I drive past the Bills bars I can't get into yet to look for Toby, who I go find when I want to see him Go Off the Top Ropes on someone. But I see no milkbag neckfat, no shaven heads or moonman Bills jackets, no Toby.

And when I can't find Toby, I drive past the 7-Eleven Powered Only by an Iron Lung to look for Lip Cheese, who at least I can rip on, although it's way better when it's me and Necro and Toby ripping on him. And when I can't find Lip Cheese, I look to see if I'll finally do it: the Sadness Custard Montage. Because I can feel some dials turning in my tear ducts, because I am probably Friendship Dead Weight now, and now I can cry myself out of Colonel Hellstache Nate and maybe into Platinum-Murman-Card Gold Membership Nate, who has Plans beyond doing Rochester Classic Drivearounds every night, who isn't afraid to apply for jobs and wouldn't be embarrassed about messing up the cash register subtotal in front of everyone, and who could remember, at night, to set a vitamin on the counter for the next morning, and wake up early enough to eat breakfast like a man if needed.

I pull into the lot of the Blockbuster on Goodman. The store is bright in my mirrors. I turn off the car and
shorten my breathâYou're finally ready! says the Sadness Custard flight attendantâand I try to find a way to let the Sadness Custard Montage happen. Because, Sadness Custard Montages are rare as comets. I'm still 0 for 5 going through with one; I couldn't even cry when Norwood missed that kick in 1991. And right when I start to really get ampedâlike I don't even care who sees me, like this is a goddamn Mountain Dew commercialâthe inside of my chest turns into sealed Tupperware.

Fortunately, me and the Tupperware Feeling go way back. So as a detour, I look for the guilt-like feeling I get whenever I look at Mom's coffee mug with the Golden Retriever sketched onto it, but all I do is grind my teeth. So I tell myself: Someday your parents will be dead, asshole, and if you can't feel Sadness Custard Montage then how long are you going to wait until some woman who maybe you could have married, who I can't picture, finally takes me aside and says: “Oh my God. You
sociopath
.”

And when I can't find any of that, I lean forward and hug the steering wheel. Outside the store entrance, a man with a gray buzz cut and a white Dolphins jacket is straddling a BMX and looking at me. So I drive home.

The one-floor houses in Gates have muddy front yards and longish driveways. The kitchen light is off in my houseâa shingly juice-drink carton on Gillettâand the TV is on in the living room. Mom doesn't look over when I untie my shoes.

She's still in her rib-high work pantsuit, pouring the one
glass of Sam Adams she allows herself each night. She sets the glass underneath the paper towel rack in the corner of our tree-fort-sized kitchen, like she's hiding it. Then she goes into the living room, so when she wants a sip she has to go back into the kitchen, creating a hassle for herself.

I check the refrigerator for Post-itsâNo “Nate: Necro called,” no “Toby called,” not even “Lip Cheese called.” I step down the single step into the living room and sit on the carpet, which is marbled blue, as if to imitate water maybe.

Mom leans back on the Woolly Mammoth, which she calls our sofa, stretching the punctures in the leather. Her work loafers are still on, hanging above the carpet in a way that makes her stomach look inflated.

She keeps her eyes on the TV, where on Letterman, which she takes in like news, a robot with Bill Clinton's head shoots lasers out of its eyes at a bag of French fries.

I don't bother finishing, and I take the cordless phone to bed with me in case it rings and it's Necro. Lights on, I stare at the glow-in-the-dark stars I pasted to my ceiling in fifth grade and try to form constellationsâthe Bright-Nippled Astronaut; the Talking Sump Pump; a constellation that looks like a bird, then a mustache, then a bird, then a mustache, then a bird. Then I get mad, because I can never concentrate, and whenever I can concentrate, it's during times like when
I'm brushing my teeth, and I'll splash water on a moth in the sink until it squirms down the drain, like I just killed something, on total cruise control, like I might blink my eyes one afternoon while mowing the lawn, and when I open them, I'll be in a Friendly's, with a knife in my hands and a waiter on the floor. So I roll over.

The next morning, the phone is twisted up into the corner of my pillowcase when I wake up. But there's freshness in my muscles and eyes, like the first day back from the flu, like I could call somebody Colonel Hellstache and mean it.

Which thank God, because I will need it today. Because hear that noise from one bedroom over, like metal train gears? It's Mom and Fake Dad No. 3. Their lovemaking sounds angry, like slapped mozzarella and ground teethâa real Alaskan Meteor Shower. The reflection in my framed Machine Gun Kelly posterâhis arm right-angled to throw the footballâis vibrating.

Alaskan Meteor Shower, Somerville Catcher's Mitt, Twin Cities Yogurt Bowl: Real Dad's phrases. The idea being that if you combine any geographic location with any item, it'll sound like a sex term. Which he came up with after he moved out and blew all his money on Garbage Pail Kids, collectors' Pez dispensers, and Halloween-themed LPs. My point being, Fake Dad No. 3's condo's gas heater is broken, so he's been staying here. He owns more purple thingsâbathrobes, the velvet padding in his acoustic guitar caseâthan I've ever seen ever.

I go down the hall with the phone and into the living room to watch some HBO, which Real Dad ordered but Mom forgot to cancel. Summers, in this living room, I'd
crank the box fan and move it from the doorwell, where Mom always kept it, to right next to his recliner, and his fallen-out ponytail hair snared on the fan grates. And when I was youngerâPants-and-Nintendo Phaseâand needed to look out our sliding door at night because I was scared someone was out there, he'd let me look until I was sure.
Nobody is out there Nate!
Mom said.

As in, here's Mom nowâfully pantsuited, the curls in her bird's nest of hair sharpened with sweatâand Fake Dad No. 3, with his Thor-blond pageboy cut, trimmed beard, and silk R&B pajamas, coming into the kitchen for some Post-Oakland-Tire-Fire lunch. Leif Thundertrident is what I call him, for obvious reasons.

Fake Dad No. 3 leans against the living room's entrance, chest and face still pencil-eraser pink. He dangles one foot from the single step going down into the living room.

“Welcome to the day, mister,” he says, voice a little woodsy and hoarse. “I trust you dreamt fulfillingly?” Which makes you want to staple his face to a moving train.

I shoulder-brush past Fake Dad No. 3 and go into the kitchen. Our fridge is puckered shut, and I nearly lose my balance opening it to get my morning Gatorade. Fake Dad No. 3 sits down at the table in what used to be my seat and crosses his legs at the thighs.

“Maybe it's because I've been touching people more, because I'm licensed now, but you've appeared in my dreams quite a bit, Nate,” he says, which is creepy enough to make diapers wet themselves. “Last night I dreamt Reiki Massage hired you as my assistant. When customers would look
through our CD booklet and request music to enhance their session, no matter what the album request, you put in this Megadeth album you'd brought with you. A request for Zakir Hussain: You put in Megadeth. A request for G. N. Balasubramaniam, the Carnatic vocalist: Megadethâpiping into the massage studio. âIt keeps deciding for me,' you said over and over, hopelessly. But at the end of their session, customers came out, revitalized as ever.”

He pauses, like he's waiting for me to be amazed.

“Maybe you'd be good at it,” he says. “A good worker. A good”âand he pausesâ“toucher.”

Mom stabs the pan with a spatula. She doesn't scramble eggs so much as make Nerf pancakes. “Gareth, Nate doesn't care about work. Nate cares about â¦”