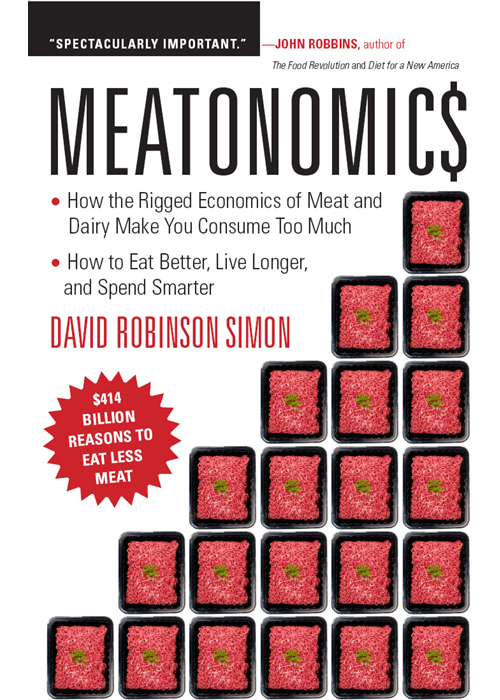 “Consumers can only make wise purchases of meat if the price they pay reflects the full cost of producing it—when there are no ‘hidden’ costs like subsidies or environmental damage. Simon is the first author to attempt a complete accounting of all these hidden costs, something that should be applauded by the vegan and meat-lover alike.”

“This important book joins the ranks of T. Colin Campbell's
Whole
and
The China Study
in its power to expose the truth and begin to repair the health care crisis.”

—P
ATTI
B
REITMAN
,
co-author of
How to Eat Like a Vegetarian,
Even If You Never Want To Be One
and
How to Say No Without Feeling Guilty

“
Meatonomics
will grab you and not let you go. It's a critically important and absolutely fascinating and astonishing in-depth look into the devastating effects of an industry's economic take-over of our culture and our well-being. David Robinson Simon not only cogently and systematically exposes the many facets of cost externalization by the meat, dairy, egg, and fishing industries, but he also makes a compelling case for practical solutions that we can all work for, discuss, and implement, including a meat tax, changes in government subsidy programs, and personal food choices. Meatonomics has my highest recommendation—a book that liberates as it illuminates.”

“We like to think we live in a democracy, where public officials tend the general welfare. But increasingly, corporate lobbyists write our laws, and corporate interests dictate what we are allowed to know. David Robinson Simon's book is spectacularly important, because it lifts the veil and shows how the meat and dairy industries rig the game, and thus are able to stuff us with foods that imperil our health, devastate the environment, and cause unrelenting cruelty to billions of animals. He reveals the massive subsidies that make industrial meat and dairy products seem cheap, when in fact they are destroying our lives and our future. He lets us see what these industries don't want us to see—the true cost we are paying for their products. And he shows us the steps we need to take, as individuals and as a society, to restore both our economic sanity and our health.”

—J
OHN
R
OBBINS
,
author of
The Food Revolution, No Happy Cows,
Diet For a New America
, and other bestsellers

“The need to transform the unhealthy, unsustainable, and unjust food system that prevails today runs deep. It will require food activists and researchers to undertake what will constitute a long march through the entire food chain. A critical starting point involves the corporate-dominated meat production system. David Robinson Simon takes us on that journey and helps us identify what we will need to confront and the changes that will need to be made.”

“A lively, well-researched look at society's many misconceptions about the production and consumption of meat. If you eat meat, you owe it to your body and your planet to read this book.”

—R
ORY
F
REEDMAN
,
author of
Beg
and co-author of the Skinny Bitch series of books

“The knowledge in
Meatonomics
will free you and put you in control of your own food choices and health.”

“Bringing cheap meat to the American table not only degrades the American palate, but it requires a series of corrupt bargains. David Robinson Simon exposes this corruption with impressive research, incisive prose, and the passion of a muckraker. The ultimate novelty of Simon's book is to portray our excessive consumption of animal products as a profound governmental failure, one abetted by corporate greed and systematic consumer deception. Depressing as the story of meat can be, Simon leaves the reader feeling empowered and inspired to eat in a way that reflects our deepest values as concerned consumers. One finishes this book ready to make a change.”

“
Meatonomics
provides what is perhaps the first thorough look at the shocking economic impact factory farming has had on all Americans.”

—N
ICK
C
OONEY
,
author of
A Change of Heart
and the founder and director of the Humane League 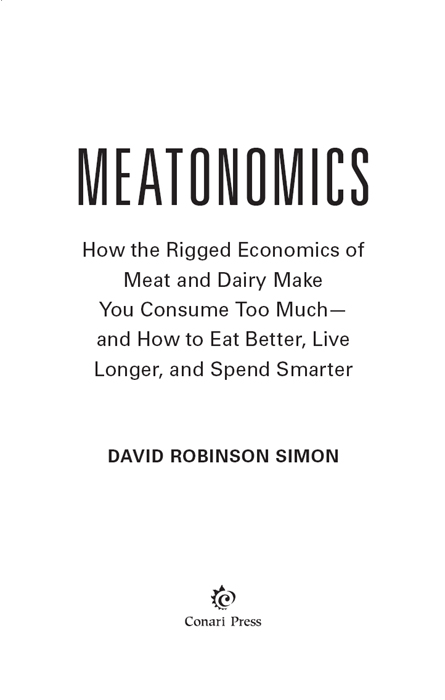 First published in 2013 by Conari Press, an imprint of

All rights reserved. No part of this publication may be reproduced or transmitted in any form or by any means, electronic or mechanical, including photocopying, recording, or by any information storage and retrieval system, without permission in writing from Red Wheel/Weiser,
LLC
. Reviewers may quote brief passages.

Meatonomics : how the rigged economics of meat and dairy make you consume too much-and how to eat better, live longer, and spend smarter / David Robinson Simon.

Typeset in Warnock Pro and Universe

The paper used in this publication meets the minimum requirements of the American National Standard for Information Sciences—Permanence of Paper for Printed Library Materials Z39.48-1992 (R1997).

Part I: Influencing the Consumer

3. Sausage Making and Lawmaking: Influence in the Political Process

5. Feeding at the Subsidy Trough

8. The Costs of Cruelty

Appendix B: Summary of the Annual Externalized Costs of US Animal Food Production (in billions)

Let me begin by getting a couple things off my chest. For starters, economics is subjective. John Kenneth Galbraith said the field was one in which “hope and faith coexist with great scientific pretension.” The figures I propose for the costs of meatonomics are based on data that are slippery and hard to find, and the calculations themselves can vary based on how the math is done. Still, I think it's worthwhile to try. I've sought to present figures that I believe are reasonable and as accurate as possible, and in each case, to explain where they came from. Nevertheless, I'm the first to admit that this book's cost figures are, like almost everything in economics, subjective estimates.

Furthermore, while parts of this book deal with economics, medicine, and ecology, I'm not an economist, a doctor, or an ecologist. I'm a lawyer, and that's why I like to write disclaimers. A number of specialists in these areas have read and commented on the manuscript, which I hope means it contains no glaring errors. The book's analysis and conclusions are supported by research cited in more than seven hundred endnotes. Most of this information comes directly from government reports or published, peer-reviewed studies.

If you want to understand what's going on in the animal food industry, sometimes it helps to be an expert. But more often, you just need to keep your eyes and ears open, and approach the subject with what some Zen practitioners call “beginner's mind.” As Zen master Shunryu Suzuki observed, “In the beginner's mind there are many possibilities, but in the expert's mind there are few.”
1

Imagine a bakery that sells every cake, pie, or loaf of bread for a dollar less than it costs to make. It's a challenging business model, to say the least. But instead of going out of business, say the shop flourishes and expands, adding more ovens and increasing output for years. Impossible, right?

For a bakery, maybe. But not for America's big producers of meat, fish, eggs, and dairy. The animal food industry actually uses this contrarian business model with surprising success. Take hog farmers, who routinely spend an average of eight dollars more raising each pig than the animal yields when sold.
1
The farmers, at least the big corporate operators, are in hog heaven. That's because government subsidies actually make this business model profitable for those at the top. For the same reason, corporate beef producers routinely spend from $20 to $90 more than each animal's value to raise cattle.
2

Each year, American taxpayers dish out $38 billion to subsidize meat, fish, eggs, and dairy.
3
To put this corporate welfare package in perspective, it's nearly half the total unemployment benefits paid by all fifty US states to unemployed workers in 2012.
4
However, as we'll see, unlike unemployment payments, subsidies don't actually benefit many Americans—nor many farmers—and they are often disbursed in illogical and unfair ways. Consider this: media mogul Ted Turner and former NBA star Scottie Pippen were among the more than one thousand non-farming New York City residents to pick up farming checks from the federal government in 2007.
5

When it comes to the market for crops used as animal feed, which means the majority of crops grown in this country, America's enormous farm subsidy program turns the system topsy-turvy. Bizarrely, government handouts encourage farmers to grow more
of these crops even as prices decline. This is as backward as parents giving their kids extra money to make cold lemonade in the middle of winter. It just doesn't make sense. Perhaps even worse than wasting the money, the consistent result of such a subsidy policy is to put small farmers out of business and damage rural communities here and abroad. But it doesn't end there. Taxpayers also provide subsidies to encourage fishing even when it would otherwise be unprofitable. Yet with twice the number of fishing ships patrolling the seas than are necessary for the task, humans have already destroyed one-third of the ocean's fisheries and, unless we cut back, are headed for complete destruction of all currently fished species within several decades.
6