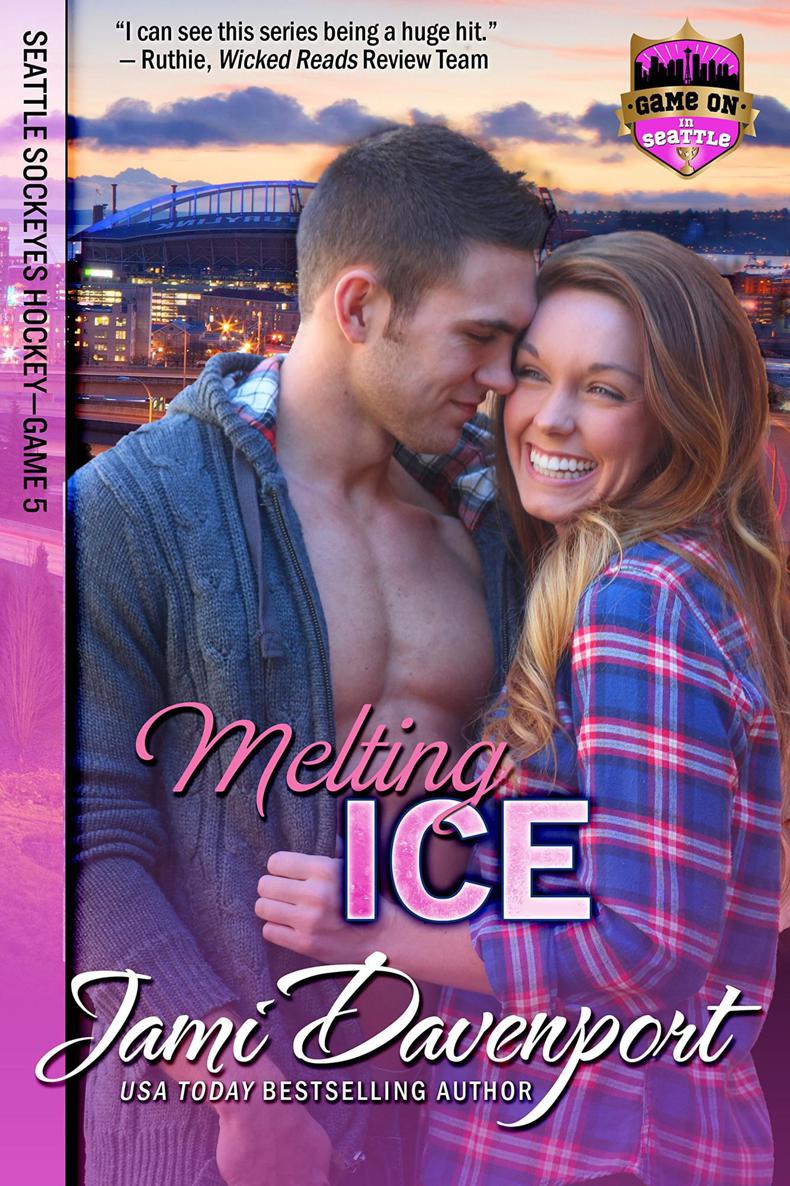 Chapter 4—One and Done

Chapter 9—Not Really a Date

Chapter 17—A Man in Love

Chapter 21—A Night of Beginnings

Chapter 22—The Gift of Love

Game On in Seattle #5

All rights reserved. This copy is intended for the original purchaser of this book ONLY. No part of this book may be reproduced, scanned, or distributed in any printed or electronic form without prior written permission from Jami Davenport. Please do not participate in or encourage piracy of copyrighted materials in violation of the author’s rights. Purchase only authorized editions.

This EBook is licensed for your personal enjoyment only. This EBook may not be re-sold or given away to others. If you would like to share this book with others, please purchase an additional copy. Thank you for respecting the hard work of the author.

This book is a work of fiction. While reference might be made to actual historical events or existing locations, the names, characters, places, and incidents are either the product of the author’s imagination or are used fictitiously, and any resemblance to actual persons, living or dead, business establishments, events, or locales is entirely coincidental.

As a writer, I have a soft spot for damaged souls. My first damaged soul was Tyler Harris, the foul-mouthed quarterback in Forward Passes. While I’ve written other damaged souls since Tyler, none have stuck with me quite like Tyler did. Until Now. Along comes the Wolfe Pack, a group of three brothers, each as damaged as the last, and fighting to keep his humanity in a cruel world that punishes the weak.

Each brother handles his baggage in a different way and each will require a unique woman with special strength to glue back together his broken pieces.

This book is dedicated to all my readers who
got
Tyler and considered him one of their favorite book boyfriends.

I hope you enjoy Isaac and Avery’s story as well.

You may notice that I’ve changed Betheni’s name to Bellani in this book. This change was necessary, and I do apologize for any confusion it may cause.

Brimming with attitude and broken beyond repair, Isaac "Ice" Wolfe has a heart as cold as his nickname, and he likes it that way--until he meets his neighbor Avery Maxwell. Avery is unlike any woman he's ever known. Her smile thaws his frozen heart. Being with her heals his broken places. She makes him feel, and for Isaac that's not always a good thing. Isaac has burned every bridge in his professional hockey career. When he's traded to the Seattle Sockeyes halfway through their inaugural season, he knows he won't get another chance. He's never been a team player, yet he needs to become one--and fast.

Avery has only wanted one thing in her life--to train and show horses. Her decision to drop out of college to pursue her riding career causes a rift with her big sister, but Avery is tired of following everyone else's dreams. Now she's following her own, and no one is going to distract her from her passion--until she meets a dark stranger and his cantankerous dog.

When Isaac is warned away from Avery by the team's captain, who happens to be Avery's future brother-in-law, Isaac sees the writing on the wall. It's Avery or his career. To Isaac, a life without hockey wouldn't be a life worth living. But what about a life without Avery?

Do Isaac and Avery sacrifice their mutual passion for each other in order to achieve their goals, or do they fight to have it all, even if by doing so, they might lose everything in the end?

Nobody liked Isaac “Ice” Wolfe, least of all his brothers and definitely not his dog. Isaac didn’t care. He didn’t like them either. The women in his life hated him, too, but you don’t get laid based on your personality, so he had no shortage of women in his bed, each one believing she could melt the ice freezing his heart and making him hers. Only Isaac would never be anyone’s anything. He didn’t have it in him to love. That part of him had been irreparably damaged three years ago, if he’d ever truly had that capability.

Sometimes, but not often, while in a rare introspective mood, Isaac wondered why he was such an asshole. Some deviant part of him must enjoy it. Maybe the old
misery likes company
thing. Maybe because being an asshole ran in his family from his abusive father to his ungrateful, unforgiving dickhead brothers. Theirs was a hate/hate relationship, and Isaac had convinced himself he didn’t give a shit about them like most things in his life—except hockey.

Isaac lived and breathed hockey. Playing hockey was his sole joy, his sole purpose. He’d been skating since he could walk and entered the NHL four years ago at twenty-two. Only his career hadn’t quite gone as planned—maybe it was the partying, the sour attitude, and the fighting with teammates. Figuring that out required introspection, another thing Isaac did not do, being pretty sure he’d hate what he found.

When the GM of his third team in less than a year called him into his office, and Isaac saw his chickenshit coach sitting there, he knew he was about to be shipped off to the next crappy team that would look beyond his attitude because of his work ethic and talent. Each team seemed to think they could bend him to their will and make him a team player. But none of them could. Isaac didn’t bend, and he wasn’t a team player. It was all about him and his stats, and he admitted it. Sure, he wanted to win, and if winning meant that he needed to pass the puck or help out a teammate, he’d do it for the sake of winning, but not for the sake of his team or team or teammates.

A long time ago, so long ago he couldn’t remember his age, he’d been all in for the team. Then he figured out no one really cared about him as a person—not his teammates, not his coaches, and most of all not his father. Dear old Dad was all about Isaac’s stats, and being a good teammate didn’t enter into the old man’s future plans for any of his sons. Besides, good teammates sacrificed for the team, and instead of being rewarded for being good teammates, they were shipped down the road when a younger, cheaper alternative became available. Loyalty didn’t play a part in professional sports. This was business and only business. Isaac no longer bothered getting to know his teammates not did her buy into all the team bullshit the coaches spouted.

What the fuck ever.

Yeah, he was fucked up, but who wouldn’t be with his past? As long as he had hockey, he had a purpose. Hockey—his first true love and his only love.

He was a loner; even in the locker room he kept to himself. He just wanted to play hockey. That was all. He gave them everything on the ice and let his play speak for itself. When forced to talk to the press, he uttered surly one-word answers.

Every morning Isaac showed up before daylight, worked out, skated, and watched film until he swore he had every NHL game memorized from the first puck drop. Only this morning, he’d been called off the ice to meet with management. So here he was, feeling a definite déjà vu and forcing himself to remain stoic and unemotional, just like his nickname suggested. Inside he was a hot mess of emotions. This might be the last time he graced the inner sanctum of the league offices of a pro team.

What if there wasn’t another team willing to give him a shot? What if all the talent in the NHL wouldn’t save him this time? Anger and resentment boiled inside him, but he tamped it down, refusing to let them see him bleed.

“Patrick Simons is out for a month,” the GM said, his voice dripping with unspoken accusations.

He’d pulled off the gloves in practice yesterday and gone after the douche for pissing him off—he couldn’t remember the reason why—and left the guy in a writhing heap on the ice with the team trainers huddled around him.

Isaac had a bit of an anger issue. Even though he tried like hell not to let guys get to him, he’d finally cracked under Simons’ constant harassment. The guy deserved it, but by the looks on management’s faces, they didn’t agree.

“Sorry,” Isaac said sullenly, bracing himself for the inevitable.

The men looked at each other while Isaac clenched his hands under the table.

He knew what was coming. He wasn’t an idiot.

Finally the coach met his gaze. “You’re done here.” The jerk smirked, as if he were enjoying this. He’d been trying to get Isaac off the team ever since he’d been hired in the off season.

Isaac could play poker with the best of them. He never, ever let anyone see him sweat, never showed the least bit of emotion; even his anger was ice cold and purposeful. Yet, this time, he struggled to keep his emotions at bay as the white hot knife of fear cut through him straight to his glacial heart.

How many more chances would he get before he lost the one thing left in his life that mattered?

“Where?” he croaked, pissed at his rare display of weakness. “Where am I going?”

The GM waited, long enough to see him squirm. “Seattle,” he said, as if he’d just exiled Isaac to some minor league team in the Yukon.

Seattle?
Not exactly the Yukon, but pretty damn close. His asshole brother was in Seattle doing a piss-poor job as the Seattle Steelheads quarterback. He hadn’t seen either of his brothers in three years, and he didn’t plan on seeing them anytime soon. He hoped like hell the city was big enough for the two of them.

Driving Force by Andrews, Jo
Endless Days (The Firsts) by C.L. Quinn
Stalking the Unicorn: A Fable of Tonight by Mike Resnick
A Question of Love by Isabel Wolff
Ultimatum by Gemma James
Let It Burn by Dee Ellis
Senior Advisor to the Boss: Billionaire Obsession Dark Romance (Managing the Bosses Series Book 9) by Lexy Timms
The Tranquillity Alternative by Allen Steele
The Girlfriend (The Boss) by Barnette, Abigail
The Accidental Movie Star by Evans, Emily