Bell backed away from her. Ms. Curtis looked desperate, like everything she loved was blowing up in her face. And I guess it was.

The footsteps got closer to the top of the stairs.

“They don’t know you’re here, Nora,” she said. “I just agreed to rat out the group leaders.” She gave us one last push toward the door. “I’ll stall them as long as I can,” she added quietly, then she darted up the stairs.

“So will we,” the chairman said as he and two other MLSG men moved to block the stairwell. “Go.”

Bell didn’t budge. He stood there staring after Ms. Curtis for a long moment—one we didn’t have. We could hear her talking to the police or whoever they were. I poked my head out into the alley. Nobody. I tugged hard on Bell’s arm, and he finally sprang into action. We dashed to his car. He punched in the ignition code, but nothing happened.

“Damnit,” he swore, and then pointed to the sticker on the windshield. “We’ve been deactivated.”

I didn’t know what that meant, but I could see a bigger danger down the alley. Several blocks away, a black van was parked across the alley exit. I glanced over my shoulder and saw a similar van blocking the entrance.

“I’m sorry, kid,” Bell said. He smacked the steering wheel with his fist.

Then something in the car crackled, and a muffled voice said, “The side alley on your left is clear.”

Bell fished an old walkie-talkie out from under his seat. “Copy that,” he said, holding down one of the buttons.

“Officer Bell?” I said slowly, again pointing toward the black van in front of us. He looked up and saw it, too.

A guy in a black uniform was walking slowly toward us, his machine gun raised, pointing straight at us. “Get out of the car,” the man barked. He was still a couple hundred feet away.

“Follow my lead,” Bell said as he tucked his walkie-talkie into my backpack. “And when I say
run
, run like hell down that side alley.” He nodded his head toward an alley on the left. It was a few yards in front of the car.

We got out of the car with our hands in the air. Bell had his badge in one hand. He yelled that he was a cop and that he was taking me in for truancy. We walked slowly forward as Bell ranted at the guy in black about disabling a police vehicle and interfering with an officer of the law. As he got closer, I could see the man’s uniform was as unmarked as the van. “Let’s see some ID!” Bell called as we drew even with that side alley. Bell stopped walking, but he didn’t stop talking. “Who do you work for?” he shouted. Then he said to me real low, almost like a growl, “Run.”

I did. My backpack in tow, I took off down that alley like my nightmares were chasing me. Behind me I heard Bell yell at the Soft Target guy—who else could he be?—about costing him his collar. Then I heard a scuffle. I kept running, but I didn’t know where I was going. The alley stunk. It was nothing but dumpsters, trash, and fire escapes.

“Hide,” the voice in my backpack crackled. I ducked behind a particularly smelly trash bin. I could hear the screech of tires and running. A figure in black shot past where I was hiding. A dark figure swung down a fire escape and knocked the Soft Target guy to the ground. The guy didn’t get up. Mr. Yamada, in his black tracksuit, stood in front of me. Sasuke indeed.

“We need to get you to school,” he said, not at all out of breath. “It’s only a few blocks down on your right, over the King footbridge. Hide on the other side of that dumpster.” Mr. Yamada pointed toward the mouth of the alley. “And wait for my signal.” With that, he scrambled back up the fire escape and onto the roof in one fluid motion.

Micah would have loved it. Too bad I won’t remember to tell him.

The guy on the ground moaned. I scrambled toward the spot Mr. Yamada had shown me.

“It’s clear. Turn right,” Mr. Yamada said through the walkie-talkie in my bag, his voice barely loud enough to hear above the street noise. I imagined him leaping across rooftops and swinging from ledges up above as I scurried along the street. When he told me to duck into a doorway or hide behind a car, I did without even thinking about it. And soon the King footbridge was in sight.

I stopped on it for a moment to catch my breath and watch the traffic stream underneath me. No black vans among them.

“You don’t have to do this,” a voice said beside me. Mr. Yamada stood there in the flesh once more. This time he was a little winded.

“I do,” I told him, and started walking.

He took the walkie-talkie from my bag and followed me without saying another word. And then Koji Yamada melted into the crowd that was beginning to form in front of the school.

Score one for the phone tree
, I thought. I could feel their eyes on me as I pushed through the front doors.

The security guards searched my bag and then watched me walk down the hall into a crowd of my friends. I opened my big, hollow book on medieval churches and started handing out copies of
Memento
as fast as I could. My girls looked shocked; but as the security guards started running toward us, Maia and Abby grabbed handfuls of paper and started throwing them in the air. So did Tom Slayton. Other kids jumped for pieces of paper before they ran off to catch their buses or go to practice. I stood there, paper raining down on me, until I felt a hand on my shoulder.

I turned to face the rent-a-cops. Behind them I could see that the crowd on the steps outside had grown bigger. At the front, Mr. Yamada was flanked by several MLSG members I sort of recognized and a striking-looking tattooed woman in a corset and jeans whom I’d never seen before. And beside her stood Micah’s Mrs. Brooks, gripping the leash of the big black dog.

Evidently you can’t monitor all the people all the time.

The front doors locked, and one of the security guards shoved me through the staff door into the parking garage.

“Damnit, where’s Bell?” he said, motioning for the other guard to get the car.

And just as rent-a-cop number two ran toward the first parking level, an elegant, short-haired woman with a tiger claw tattoo peeking out from underneath her cap sleeve stepped between the door and me. She stuck a Channel 5 Action News camera in my face and asked me what this was all about.

So I told her.

Well, everything I could get out before the rent-a-cop came back with the car.

And that brings us to the here and now. It’s ten past two on I-don’t-know-what day, and I’ve told you the story of
Memento
, of me and Winter and Micah. I’m sure they’ve told you theirs, too. Well, I hope they have. And you know it’s the truth because you gave me a shot of something to make me blab like this.

My mom is sitting here behind her shades listening to every word. Trembling. White. Ashen, really. Definitely not glossy. But all there. She’ll hold my hand while you give me the Big Pill so I’ll forget everything that I’ve just said. No doubt you’ll make sure I swallow this time. Then you’ll give her a pill, and she’ll forget all about this, too.

And we’ll live glossily ever after in Los Palamos.

I felt like I’d been in a coma for days, weeks maybe. Then it was like I’d come to and found myself on the bus with Mom. Home Security Depot was hawking some new crap in front of me while I was plugged into my earbuds, the Lo-Fi Strangers’ newest tune roaring through my foggy brain. Next, some Channel 5 Action News chick reported on an investigation into a security company. Blah-blah-blah. I closed my eyes again.

I stumbled out of the bus after her, still not feeling quite all there. It wasn’t our stop.

Mom grinned and dangled something in front of me. A key card. She pointed to the building across the street. “Third floor,” she said. “Our stuff’s already inside.” She tossed me the key. “Even your sketch pads.”

A cab let us off at the corner of Eighth and Day. My brain felt like pudding. The last thing I remembered, I told Grandfather, was working on the sculpture garden in the backyard.

Sculpture garden?
he asked as if he didn’t have a clue what I was talking about. We pressed our way through the secret door in the back fence, through the Sasuke course, and through the bamboo gates into my garden.

Grandfather didn’t say a word as he took in the Pawing Man, the Flailing-Arm Windmill, and the Shopping-Bag Crab. Those, I remembered creating. That masked thing with the monkey wrench and the gears, though, was a complete mystery to me. It was like a stranger had invaded my garden and finished it for me.

I wanted to be that person.

Mom and I walked for blocks without saying a word. Then she stopped, spit something out on the sidewalk, and ground it under her Italian leather heel. Right in front of the Starbucks next to TFC No. 23. Right in front of a word——spray painted in red.

“Thank you, Nora,” she said, looking all sad and smiley at me.

“For what?” I had no idea what she was talking about. The last thing I remembered clearly was getting in the car this morning to go shopping with her. I checked my mobile. Nearly four weeks had gone by.

“I’ll tell you on the way to the beach.” She flashed her mobile at me. Her TFC point balance was zero. “I knew I was saving up for something.”

When I asked if Dad would be joining us, she just smiled again and said, “Oh, he’s going to be a bit tied up at work now. The whole company, your father especially, is in hot water over this black-van thing.”

I didn’t ask what she meant. I was busy admiring the glossy silver bracelet, with its little purse charm, dangling from my wrist.

We stopped by the house to pick up a few things. Mom insisted that I pack my history book
MEMENTO
. She said I had an exam on the Renaissance when we got back. How dreary.

Later, while we munched popcorn shrimp at this cute café by the sea, Mom told me this crazy story about me and some kids named Micah and Winter and a comic book (of all things) we created. 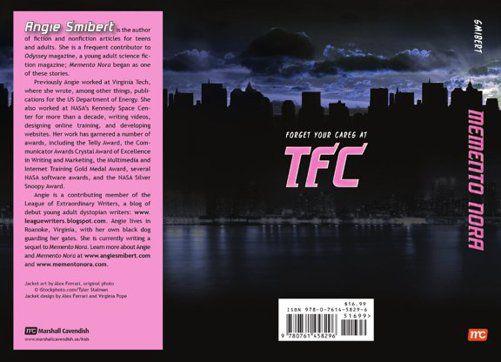