Mermaids in Paradise: A Novel 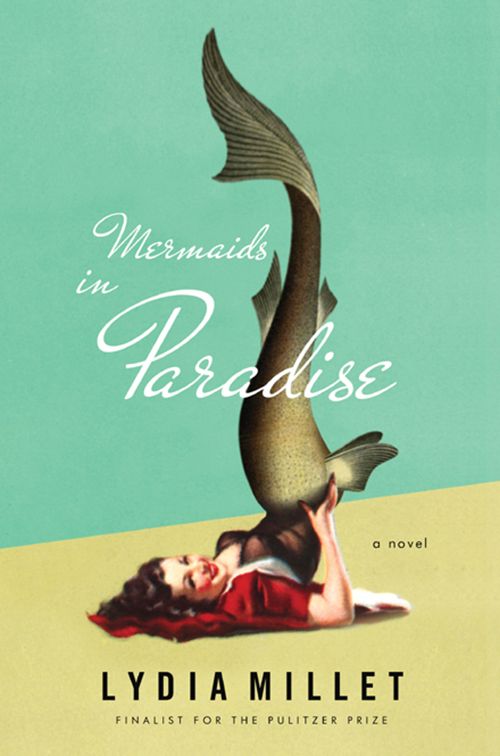 C
hip picked out the destination for our honeymoon. He’d always wanted to take a cruise, just like Middle Americans. Middle Americans love cruises, Chip said ardently. Chip’s a romantic when it comes to the people of the Midwest, and also those dwelling along the Rocky Mountain front, the landlocked parts of the South, things like the Dakota area or what have you. Those places are somewhat mythic to Chip. He has what I suspect is a fanciful idea: people that live away from New York or L.A., D.C. or San Francisco, maybe in a pinch Boston or even Seattle—those people are modern-day pioneers.

The Middle Americans are resolute, Chip thinks, living by choice in that vast featureless space, that oddly irrelevant no-man’s land. They have their reasons, Chip believes, reasons we couldn’t understand, or moral fiber, possibly. To hear Chip talk you’d think every Nebraskan male knows how to put a horseshoe on a mule. They know how to bring forth grain from dirt, or what a combine harvester is. They get what happens
to that brought-forth grain, the steps before the Cheerios. The women knit long underwear and are adept at fruit canning.

The best Middle Americans are like this, anyway, pretty much old-fashioned, according to Chip; their kids make charming toys from wooden boards, often with poking-out nails in them. Not only that, those children are delighted with the products of their ingenuity; they go ahead and play with them. Those children wave a splintered board and think of marvelous fairyland.

But Chip doesn’t want to travel there, in person, to Middle America—that wasn’t one of the honeymoon options. Chip’s a romantic, not a moron. You don’t have a Brentwood zip code and choose to spend your wedding vacation in Dayton. Literally no one does. From what I’ve seen, few people travel toward the middle of the country for personal reasons, unless a parent is dying. (The two of us won’t have to do that, since my parents, may they rest in peace, are interred in the Bay Area, Chip’s father was a deadbeat dad who left when he was ten, and Chip’s mother, more’s the pity, has a condo near here.) Chip just wanted to meet some of the hardy pioneers; he didn’t want to physically
go
to the puzzlingly dull places where they live. He feared the religious hysterics, in addition, who inhabit the boring wastes and can be alarming. They frighten a person, when gathered in groups or hordes. Or individually.

Chip talks about that quite a bit, when not gaming: the fact that honest Middle America, once plodding along reliably with combines for the menfolk, homemade preserves for the women and for the children some highly entertaining planks of wood, is
now threatened by a growing subculture—a subculture so large it’s bigger than the rest of us, actually, which maybe means it’s not a subculture at all, says Chip with a worried aspect. That’s where the fear comes in.

The non-subculture is made of people who believe that fossils are a trick. These people are suspicious of biology and mortally offended by an ape. Also they’re angry about it.

On the one hand moral fiber, possibly, but on the other hand madness.

In any case I said no to the cruise idea. I couldn’t think of a worse prospect, a floating plastic city full of food-eating vacationers, with potential for massive water shutdown, decks to be littered with plump orange bags of human waste. Closed spaces, planned activities, nausea, the smell of greasy carbs; families wearing bright primary colors or even vibrant fluorescents, heaving themselves into a pool.

Among those families wearing flashy Day-Glo clothes, those clothes that actually assaulted your eyeballs with their hideous fluorescence, there’d have to be some victims of the morbid obesity pandemic; and with the possibilities of food poisoning, sewage overflow and tragic obesity, a cruise was something I couldn’t face. And so I went to Chip, I sat down beside him and took his hands and said: “Chip, I’m glad to be marrying you. But no cruise ships. Not a single one.”

So Chip moved on to other honeymoon concepts.

He found a French driving tour involving Maseratis and Formula 1 racecars, where pros would drive a newlywed couple many times around a racetrack, superfast. So fast their heads
would have to be spinning, their innards turbulent. Not so auspicious, Chip, I said, for honeymooners, in my humble opinion. He ferreted out a “Peaks of the Himalayas” voyage next, with visits to monasteries, meditations and nosebleeds from the lack of oxygen up there.

I hope I would have used the time to think, possibly more than I do now, as a medieval-type person. I see myself singing in chapels, light streaming down on me. The singing of hymns, the kneeling down to pray, the walking with a proud, erect posture. I wouldn’t have been a peasant, I hope, busily sweeping mud off pigs, possibly dying while grunting as a baby’s head stuck out of me.

However currently I’m not a nun/monk, and neither is Chip, and chances are we’ll never be. I thought maybe the monks would turn out depressing, with their enlightened, humble existence. What came up for me, considering those Himalayan monks and the gonging sound of temple gongs, the gong, gong, gong, what
I
thought of was the suspicion a person might start to have, in the monkish setting, that marriage overall might be a bad idea. The inner peace a monk projects, combined with never having sex, I don’t know if that attitude is really honeymoon material.

You do hear about people—sure—who visit someplace Asian and scenic at a certain altitude, Asian or Indian, and then decide to go native. In one fell swoop they copy the whole Buddhist or yoga idea, they give away their worldly goods, move to a mountain hut where baths are taken in the snow and then pretend they never heard of home equity lines of credit or eyelash extensions. Next comes the cross-legged chanting, the wearing of loose and flowing robes, the eating of plain brown rice; some of them eat the rice just one grain at a time, holding that single grain in long, delicate chopsticks.

You hear about it and, despite your incredulity that a person would ever give up the bounty of our modern life, a minuscule part of you can almost see the seduction. Just minuscule, but still. I didn’t want to run the risk. I’ll take a pass on that serenity, I said to Chip, I’m just not in the mood for it.

I think, to be honest, Chip really wasn’t in the mood either, once he did more research and got an inkling that the monks wouldn’t be like monks in videogames. I think he’d been half hoping for monks with supernatural powers—at least flying kung fu. He first expected temples you could run through, surmounting obstacles and solving puzzles as you went. Then it began to seem as though extremely wise monks might be the best he could hope for, and I think at that point his interest waned.

Next he got pretty enthusiastic on the topic of a shark-feeding situation, a shark- and stingray-feeding package, with round-trip fare included, optimistically. You put on rubber fins and swim around with hostile marine life. Next came a
thrill-seekers’ week-long Air Safari, where you jumped from high places such as airplanes and treetops, wearing harnesses clipped to parachutes or bungee cords. Plummeting, plunging, then bouncing; screaming, then laughing in relief at not yet being dead. No, Chip, honey, I said. Some other time though, we’ll do that.

My point was, I don’t need to be reminded I’m alive, I’m well aware of it. Catch me later, when I’m fifty, by then I may be on the fence.

Volcano bicycle camping, snowshoeing on glaciers, ruined Cambodian temples. All had their downsides, believe me. The volcano bicycle camping was too sweaty, I thought, we’d be so grimy in our tent at night, not showered, not fragrant, no clean linens; that also was not a goal of honeymoons, was it? And the glaciers—don’t get me started there. The glaciers had crevasses that could crop up suddenly, icy-blue traps of freezing death. And lonely! After I fell down the crevasse, crumpling a leg, splinters of bone confronting me, I’d sit there all alone in the darkness of the deep, cold earth. I’d sit there wracked with pain while frigid glacial meltwater washed over me, until, blessed release, I died of hypothermia.

I could picture Chip attempting a rescue, but finally it wouldn’t work. Chip’s not a mountaineer.

The picturesque ruins in Cambodia were a better alternative, but I happened to read a blog by a Canadian who visited Angkor Wat, got dengue fever and bravely survived it. But then she slipped on a rotting mango and snapped her neck like a winter twig. It might have been a hoax, I wasn’t sure, you never know with blogs: in this case the blog started quite normally,
one of those travel blogs you see so many of, and she talked about the dengue fever, she took pictures, even, of both the ancient impressive buildings and her dengue fever rash (labeling the contrast “Macro/Micro”), and put up blog posts every day. Then for a couple of days there wasn’t any new entry, and then someone purporting to be her sister typed in a sentence saying she was deceased.

The Veiled Cage (Lady Lawyer Series Romantic Suspense Novels Book 1) by Johansen, Rita
The Lost Stories by John Flanagan
Defending Jacob by Landay, William
Holiday Wishes by Nora Roberts
Turtle Island by Caffeine Nights Publishing
Cinderella And Prince Dom by Sydney St.Claire
Moon of Skulls by Robert E. Howard
Into the Fire by Amanda Usen
Dawn of Steam: Gods of the Sun by Jeffrey Cook, Sarah Symonds
Someone Like You by Shay, Kathryn