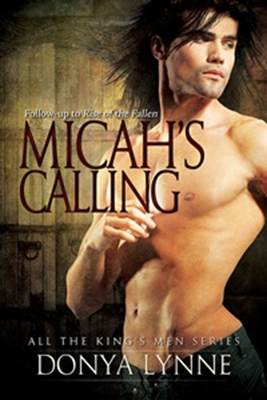 All the King's Men

Novella Supplement to Rise of the Fallen

or by email:
[email protected]

All rights reserved. No part of this publication may be
reproduced or transmitted in any form or by any means, electronic or
mechanical, including photocopying, recording, or any information storage and
retrieval system, without permission in writing from the publisher or author.
Requests for permission to copy part of this work for use in an educational
environment may be directed to the author.

This book is a work of fiction. References to historical
events, real people, or real locales are used fictitiously. Other names,
characters, places, and incidents are the product of the author's imagination,
and any resemblance to actual events or persons or locales, living or dead, is
entirely coincidental.

To you. You helped me through my own dark time, and now I
will help you through the rest of yours. You deserve happiness.

Once again, my first acknowledgement goes to my readers.
Thank you for sharing Micah's journey with me. He and I were lost souls
together at one time, and it was the readers who helped bring us both back as
his story began to unfold on Facebook.

Thanks once again to Laura, my editor, and to Reese, my
cover artist. The two of you make my books better than I could make them by
myself. Your hard work is much appreciated.

Thank you to my assistant, Carla, for putting up with my
"moments" and for helping to keep the word going about my books, and
to Jowanna for all your wonderful information and help. A special thanks to my
street team, Micah's Army, as well. Thank you for keeping the fires lit.

And to everyone else who has helped along the way, there are
too many of you to list, but you have my gratitude, as well.

Much love to you all. Enjoy the book.

Before you read Micah's Calling, I should warn you that if
you haven't already read Rise of the Fallen (and, to some extent, Heart of the
Warrior), you will not get as much out of this book as you would if you had.
Micah's Calling is a true supplement to the series, expanding on the storylines
presented in the first two books of the AKM series, but particularly on Rise of
the Fallen.

With that said, when I wrote Rise of the Fallen, I knew
there was more story to tell at the end but that it didn't fit in with the
story presented in Rise of the Fallen. ROTF, as I call it, was about Micah's
rise from his own inner hell and his victory over his self-created demons. For
me to have ventured into what occurred after ROTF's conclusion would have come
off as awkward in that book, because what happened next was a completely
separate story. Working the rest of Micah's and Sam's story into subsequent
novels in the series wasn't an option, either, because doing so would have
lessened the significance of what happened between them while intruding on
other characters' stories. The only solution was to write a novella. This way,
the relationship between Micah and Sam is given the importance it deserves, the
rest of their story is told, the rest of the series is enhanced, and all the
remaining stories can focus on their main characters without Micah intruding
more than he already does (because Micah has his nose in everything, anyway).

For fans of Traceon, of which I know there are many, you
will be glad to know that he plays a significant role in this novella. The
dynamic between Trace and Micah, as well as the relationship between them and
Sam, becomes clearer. Many readers have speculated that there's more going on there,
and they're right. Now it's time to get a better understanding of just what
that is. Micah's Calling provides the deeper inside look that readers have been
craving.

For those who have read Rise of the Fallen (and I hope
that's all of you), this novella picks up about a week before the end of that
book, and continues past the final scene. You will recognize one of the scenes
early on in Micah's Calling, since it appeared in Rise of the Fallen at the end
of the book, but I have rewritten it here from opposing points of view.

I hope you enjoy this supplement to the AKM series.

Micah Black stepped out of the bathroom, toweling himself
off from his shower, and looked at the lithe female sprawled on his bed. She
was beautiful, with pristine, near-alabaster skin so fair she looked
porcelain…except for the two reddened bumps displayed on her shoulder where he
had bitten her. Again.

She was his. She belonged to him. Fate had deemed it so, and
Micah took the responsibility of having a mate to heart. He would cherish this
female, watch over her, tend to her needs, protect her, feed from her, and be
utterly helpless to resist her if she needed him. That was the way of a mated
male vampire.

Micah sat on the edge of the bed and stared down at Samantha
— Sam — then brushed back her short, stylish tufts of blond hair. He liked her
hair short. It showed off her slender neck and gave him an unobstructed path to
her vein when he needed a fix of her blood.

Now that she had his blood in her system, she reproduced her
own blood much faster than when she had been human, which meant he could drink
from her more often. And that was a good thing, because during the past few
days of mating, he had exercised that right many times.

But now Sam needed rest. Micah had used her body thoroughly
during the past several hours. And once she had slept, he would feed her so she
kept her strength up. As harsh as the
calling
was on male vampires, it
was just as harsh, if not worse, on their mates. It was Micah's responsibility
to take care of Sam during this crucial time.

He slipped on a pair of flannel pants and quietly left the
bedroom.

Micah watched TV for a while then went to the kitchen to
prepare food for both himself and Sam. After pulling out a mix of raw
vegetables, cheese, and cold cuts, he grabbed a cutting board and a Chef's
knife and got to work.

He might have been standing at the kitchen counter in his
eighteenth-floor luxury apartment, cutting vegetables and cheese into bite-size
pieces, but his thoughts were anything but culinary. He wore a secret smile as
his mind traipsed along the memories of what he and Sam had been doing to each
other in the days since he had brought her home from the AKM facility where he
worked as an enforcer. With his
calling
finally unfurling to full
strength, demanding he impart his highly fertile seed into her at regular
intervals, he had become quite the expert on her body. And what a body it was,
and not just because she was now a stronger, immortal version of what she had
been before.

As if he had become a master sensuist in the past four days,
his mind played over how she affected his senses. She was smooth and sleek,
with supple muscles from long hours of dancing. And every time he touched her,
she quivered ever-so-slightly, but enough to let him know that he excited her
as much as she excited him. Her sultry voice was a song that needed to be made
into a soundtrack that played inside his head over and over so he could
associate everything he did with her voice. Her taste and scent should be
bottled as aphrodisiacs of nectar and perfume custom-made only for him. And the
sight of her naked body was far too fetching and exquisite for even the Louvre
to display.

But as much as he loved her physical affectations, it was
her mind that excited him the most. From their first meeting three weeks ago,
when he had awakened in her tiny studio apartment after nearly dying at the
hands of the dreck, Apostle, Sam hadn't let him intimidate her. She had taken
tit-for-tat to the level of art with him, sassing him at every turn, and that
was something no one had done to Micah for centuries.

Sam. His spunky, feisty mate. She was a marvel, and even now
he didn't feel worthy of her special beauty.

Suddenly, his twelve-inch Bowie knife shot around the front
of him toward his throat as a warm body pressed against his back. Sam's arm
darted around his waist to hold him securely as the blade came to rest just
over his Adam's apple.

"What are you thinking about in here all by
yourself?" Sam's sexy voice danced provocatively to his ears.

Micah's eyes flicked to the cutting board of food he had
been preparing for her, a grin curving the corners of his mouth.

"You." A gentle purr pulsed in his chest.

"You're purring, so I guess you're having good
thoughts?"

Male vampires purred when aroused. And her knife action
definitely had him aroused. As if he needed any help in that department. The
calling
had been driving him into her body relentlessly for days, and she had kept
right up with him, her own body responding to the heat of his.

"Very good thoughts." He grinned as the knife
pressed in harder. "You trying to draw blood, love?"

Her lips found his bare back and kissed a trail up his
spine. "Mmm, no. Just letting you know who's boss."

Even with her new, immortal body, Micah could easily take
her, but when it came to his heart, she
was
the boss. She ruled his
heart as well as his soul. As her mate, he would do anything she asked. The
biological lock she had on him would never allow him to defy her.

"Feeling cocky, are you?" Micah's body quaked from
her lips on his bare skin.

"Absolutely." Her free hand skimmed down to the
waist of his flannel pants and dipped down to wrap around his erection.
"Seems you are, too."

He groaned and stiffened as she gave him a gentle stroke.
"Yes, I'm very cocky tonight."

She kept the Bowie knife at his throat and her tongue heated
a slow trail up his spine.

"Push your pants down for me, Micah." She sounded
like a vixen, and Micah suddenly wanted to take her to his house and show her
his special room in his basement.

The blade at his throat pushed in. "Do I have to tell
you twice?"

Damn! She was good. He would definitely take her to his
house. Tonight. But first, he did as he was told and pushed down his pants,
freeing his erection for her.

Her nipples pressed firmly against his back as she pushed
forward and got a good grip on the stiff column between his legs.

The Little Doctor by Jean S. Macleod
Creature of Habit (Book 3) by Lawson, Angel
The Torrid Zone (The Fighting Sail Series) by Alaric Bond
The Dragon of Avalon by T. A. Barron
Anita Blake 14 - Danse macabre by Laurell K. Hamilton
Sisters Grimm 05 Magic and Other Misdemeanors by Michael Buckley
Who is Sarah Lawson: A Captivating Psychological Thriller by K.J. Rabane
Dick Longg: Sexual Saviour of the Universe by Mark Leigh
Mohammed and Charlemagne Revisited: The History of a Controversy by Emmet Scott
The Angels of Destiny by Haydn Jones