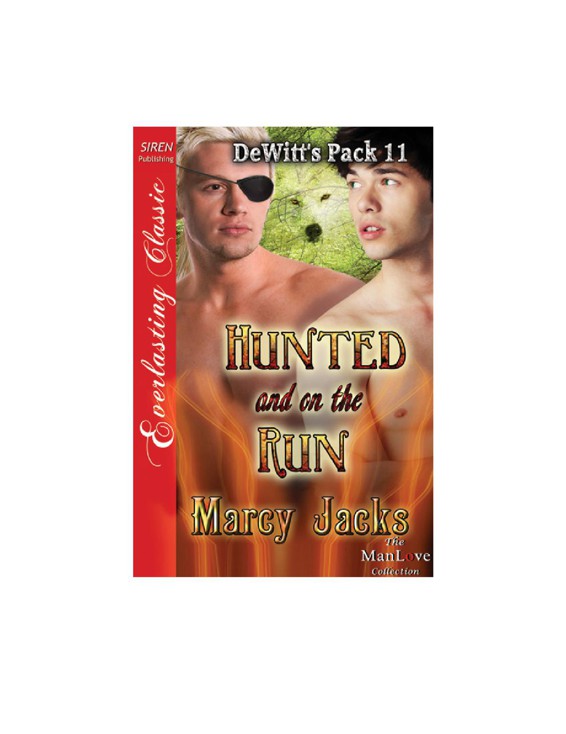 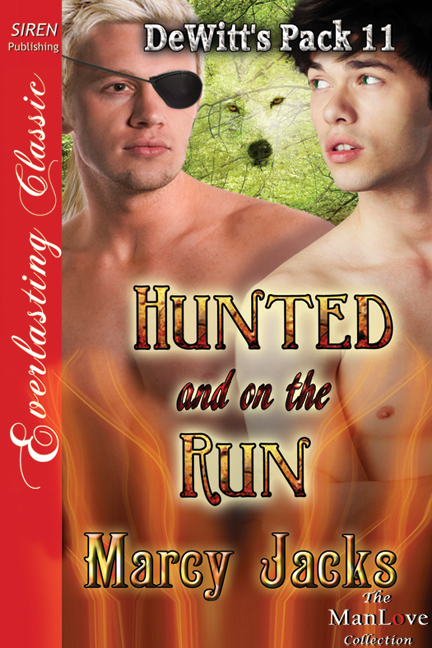 Hunted and on the Run

John Platt has been searching for his mate for months now. When he finally finds the cougar shifter, Storm, it's just in the nick of time to save his life before hunters can kill him.

Storm has been running away from John because he believes John wants revenge on him for his actions as a hunter's slave. He doesn't realize that he's been running from his mate, and he won't believe it when John tells him about it either. Two men can't be mated. That's impossible! But that doesn't stop the fact that now Storm owes John a life debt, and he is to be the man's servant for the rest of his life now, assuming they both survive.

The hunters are back on their tails, and with John so far away from his pack, it's just the two of them, on their own being hunted, having to work together to survive and protect their fragile, growing love.

If you have purchased this copy of
Hunted and on the Run
by Marcy Jacks from BookStrand.com or its official distributors, thank you.

Also, thank you for not sharing your copy of this book.

This is Marcy Jacks’s livelihood. It’s fair and simple. Please respect Ms. Jacks’s right to earn a living from her work.

John stopped along the side of a pine tree and bent his head to sniff. His tail twitched in anticipation, and his hair rose up as a shiver passed along under his gray coat.

That cougar had passed through here all right. He was getting sloppy, tired, and John was catching up to him.

He was half-worried for the shifter’s well-being and half-eager to hurry up and catch him. As a werecat, a strong, adult werecat who shifted into a northern cougar, Storm was well equipped to take care of himself out in the wild. Werecats weren’t exactly known for staying in packs, so they had to be tough.

Despite that, Storm had been running away from John for far too long. He still couldn’t figure out why. There was no way the other shifter had been oblivious to the sensations passing through them that day they met.

Maybe he thought John was tracking him down for revenge.

Storm did put a gun to Morgan’s head, after all.

He’d been brainwashed by hunters, that hadn’t been his fault, and when John finally caught up to him, he was going to make sure that no one held it against him either.

The scent was getting stronger. John pawed at a spot of pressed-8

down leaves between a couple of shrubs. His scent was strong here, and the shrubs would have kept him hidden.

He’d slept in this spot, maybe no more than a couple of hours ago.

Why not go into the trees? John didn’t really know much about cougars, but he was pretty sure Storm would have preferred to get up into the branches of a tall tree instead of sleeping on the ground where other predators lurked, especially if he thought he was being hunted.

He just had to keep looking. Christmas had come and gone, and spring was finally here, but that still left some patches of snow for the green grass to peek through, and the ground was consistently wet as it melted.

John had only just recently gotten permission to start searching for Storm. With the hard winter, his pack leader, James DeWitt, couldn’t allow it before. Winter had come early that year, and as quick and unforgiving as it had come, it had thankfully decided to leave early and with little fuss.

That hadn’t kept John from spending all winter with his stomach twisting around in knots. Cougar-shifters were rare, and they weren’t exactly known for hanging around the Eastern states. Real cougars could be found all up and down North and South America. Storm could’ve have gone anywhere without anyone really noticing him.

But he hadn’t. John had checked in with a couple local wildlife organizations about possible cougar sightings and had followed the only one that had been documented. A mountain lion wandering around this area, even with all the forest, and carrying human clothes in its mouth was pretty damn suspicious.

It had been so suspicious that no one was taking it seriously.

If a nature photographer were to show up and see the bag John had strapped around his neck, he might think that was a little odd and dismiss it as the mind playing tricks, too. They might even assume he was a crossbreed and was carrying his owner's pack. It was exactly the sort of thing that made being seen by humans, even in wolf form, so easy to get away with, and probably why regular humans hadn’t
Hunted and on the Run

figured out that all the things they thought weren’t real were actually out there.

Thankfully, Storm hadn’t left the state, and now John was on his trail. Maybe he’d found it too hard to travel during the harsh winter and had holed up somewhere. John would have to ask him when he found him.

He would also have to ask why the man was doing his best to run away from him. John was an alpha, but he was pretty sure he wasn’t that scary.

He walked some more, following the scent. It got stronger and stronger the farther he went.

Then another scent hit his nose that made every neuron, every nerve, every hair he had stand at attention.

Blood. There was blood in the air. Not a lot of it, but enough to mean that, for a time, Storm had been freely bleeding as he traveled.

John picked up the pace, following the scent of his mate until the also came across the burnt-charcoal, semisweet smell of metal.

Hunters had been in this area. Whether they were normal humans with a big game license or hunters out to get the pelt of a shifter was something John couldn’t tell off the bat.

He dug his claws into the earth, kicking up mud as he launched himself down the trail he was using.

Someone was hunting Storm. Storm was injured. He had to find him.

Storm stopped to rest and lick his wounds. They weren’t bad, considering the hunters had caught him off guard and had been shooting from Storm’s blind spot.

It was a pain in the ass having only one eye, sometimes.

He should be thankful that whoever had shot at him apparently didn’t know how to handle a gun for shit.

The bullet had only grazed his side. It was deep enough to cause him to bleed, and it stung like a bitch for every step he took and every lick of his tongue, but he was going to live. Already the bleeding had stopped.

He was pretty sure he’d lost the hunters by now, but that didn’t mean they wouldn’t be able to find him again if he kept sitting around on his ass right here. He had to keep moving.

Thank God he hadn’t lost the bag he’d been carrying around. It contained his spare clothes, human ID, and whatever cash he’d been able to quickly take from Tatum’s, Chance’s, and Tony’s wallets before he’d escaped.

Hunters, the three of them, and only Tony knew of Storm’s secret, and he’d held it above Storm’s head like a prize, using the life-debt that Storm owed him to keep them together.

Tony got off on it, the idea that one of the dangerous creatures he hunted had to do everything he said, even fuck him whenever he wanted. The big bad hunter putting an evil shifter on his knees, Tony had definitely liked it.

Storm kind of liked it, too. He hated to admit it, but he’d had a love-hate relationship with the man. Where exactly that line was drawn, Storm couldn’t even say, but Tony had never raped him.

Storm had wanted to do those things. In a weird way, it was freeing to be told to take his clothes off and be fucked to within an inch of his life.

Maybe that was the only thing he’d loved about their strange relationship, that Storm actually got to experience a sexual encounter with another man. Cougar-shifters were only as rare as they were because, unlike with a werewolf, one couldn’t transform another person into a cougar shifter with just a bite. They had to be born.

Why that way, he had no idea, but it made taking a cougar wife and having a litter of kittens a top priority to all cougar-shifters
Hunted and on the Run

Winter of Discontent (Four Seasons Book 1) by T.S. Harvey
Ever by Shade, Darrin
I Could Love You by William Nicholson
El reverso de la medalla by Patrick O'Brian
Marrying Caroline (SEAL of Protection) by Susan Stoker
Something for the Pain by Gerald Murnane
Blind Fury by Lynda La Plante
Astra by Chris Platt
Slipping the Past by Jackson, D.L.
Ricochet (Locked & Loaded #1) by Heather C. Leigh