Midnight in the Century (NYRB Classics) 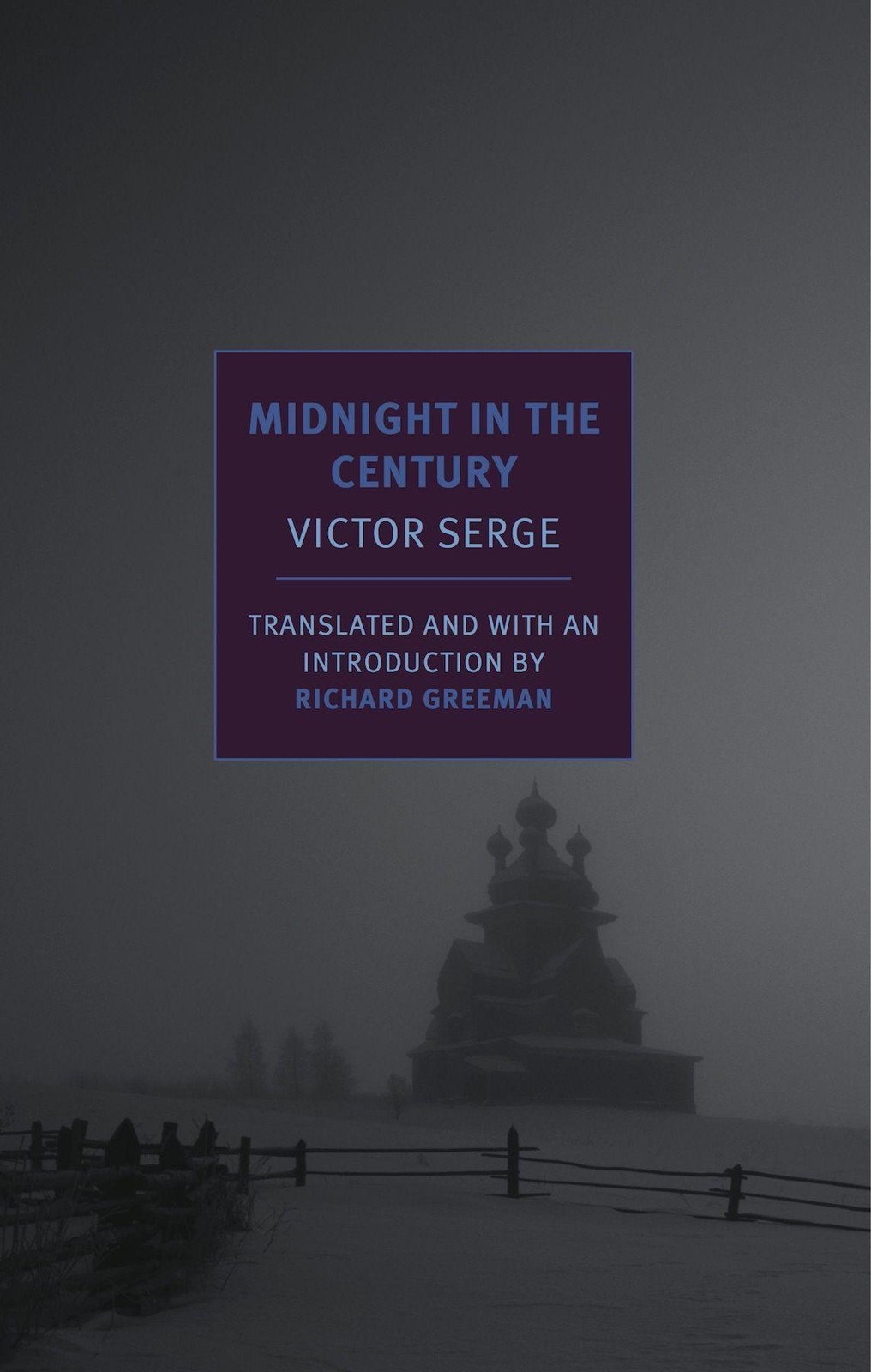 VICTOR SERGE
(1890–1947) was born Victor Lvovich Kibalchich to Russian anti-tsarist exiles, impoverished intellectuals living “by chance” in Brussels. A precocious anarchist firebrand, young Victor was sentenced to five years in a French penitentiary in 1912. Expelled to Spain in 1917, he participated in an anarcho-syndicalist uprising before leaving to join the Revolution in Russia. Detained for more than a year in a French concentration camp, Serge arrived in St. Petersburg early in 1919 and joined the Bolsheviks, serving in the press services of the Communist International. An outspoken critic of Stalin, Serge was expelled from the Party and briefly arrested in 1928. Henceforth an “unperson,” he completed three novels (
Men in Prison, Birth of Our Power
, and
Conquered City)
and a history (
Year One of the Russian Revolution
), all published in Paris. Arrested again in Russia and deported to Central Asia in 1933, he was allowed to leave the USSR in 1936 after international protests by militants and prominent writers like André Gide and Romain Rolland. Using his insider’s knowledge, Serge published a stream of impassioned, documented exposés of Stalin’s Moscow show trials and machinations in Spain, which went largely unheeded. Stateless, penniless, hounded by Stalinist agents, Serge lived in precarious exile in Brussels, Paris, Vichy France, and Mexico City, where he died in 1947. His classic
Memoirs of a Revolutionary
and his great last novels,
Unforgiving Years
and
The Case of Comrade Tulayev
(both available as NYRB Classics), were written “for the desk drawer” and published posthumously.

RICHARD GREEMAN
has translated and written the introductions for five of Serge’s novels (including
Unforgiving Years
and
Conquered City
, both available as NYRB Classics). A veteran socialist and co-founder of the Praxis Center and Victor Serge Library in Moscow, (
www.praxiscenter.ru
), Greeman is the author of the Web site
The Invisible International
(
bit.ly/invisible-international
).

OTHER BOOKS BY VICTOR SERGE PUBLISHED BY NYRB CLASSICS

The Case of Comrade Tulayev

Memoirs of a Revolutionary

MIDNIGHT IN THE CENTURY

Translated from the French and with an introduction by

THIS IS A NEW YORK REVIEW BOOK

PUBLISHED BY THE NEW YORK REVIEW OF BOOKS

Portions of the introduction by Richard Greeman were published in “Messages: Victor Serge and the Persistence of the Socialist Ideal,”
Massachusetts Review
XXII, no. 3 (Autumn 1981).

Midnight in the century / Victor Serge ; translated by Richard Greeman.

MIDNIGHT IN THE CENTURY

I. WRITER AND REVOLUTIONARY

Victor Serge’s
Midnight in the Century
is an authentic document grounded in the author’s personal experience of arrest, interrogation, and deportation by the GPU to Orenburg on the Ural from 1933 to 1936. Soon after the novel’s publication in Paris in 1939, however, Serge took pains to insist that although entirely “truthful” (in political and historical terms) his novel was a work of the imagination. Indeed, as a writer who placed himself “in the line of the Russian novelists,” Serge claimed for fiction a truth superior to that of history or the essay “combining internal vision with the knowledge of men and things.” He insisted that “to reconstruct reality with sufficient intensity of life requires literary creation and the intuition, passion and freedom it provides.”
[1]

The paradox of Serge the literary artist was that he was also a committed revolutionary. Always in the thick of action, his career united the roles of propagandist, organizer, journalist, pamphleteer, lecturer, theoretician, publicist, translator, militiaman, manual worker, occasional secret agent, and frequent prisoner (for more than ten years and under at least three different regimes). Serge was both an activist and an independent critical thinker whose political involvements evolved from anarchism through syndicalism, Bolshevism, and Trotskyism to a kind of socialist humanism. The child of anti-tsarist exiles, he came of age in a tradition of socialist culture which came to flower in figures like Lenin, Trotsky, Zinoviev, Bukharin, Stalin, Radek, Andrés Nin, Emma Goldman, Georg Lukács, and Antonio Gramsci—to mention only those with whom Serge was personally acquainted.

Of all the left-wing writers who attempted, from the inside, to depict the truth of the Communist movement during the tragic decades of Stalin’s ascendancy—names like Orwell, Koestler, Regler, Malraux, and Silone come most readily to mind—Serge was perhaps the most authentic socialist, indeed the only professional revolutionary. A veteran, eventually lonely survivor, of revolutionary movements in half a dozen countries, witness-participant to several of the major victories and defeats of the revolutionary proletariat in the first half of the twentieth century, his “knowledge of men and things” was unequaled—as was his devotion to the truth.

Yet it is above all as a literary witness and ultimately as an artist that Serge will be remembered—an artist speaking directly out of a vital socialist culture whose traditions and aspirations, successes and failures he distilled and preserved in his writing. As Erich Fromm wrote to me in 1964, “I believe indeed that to rescue the humanist tradition of the last decades is of the utmost importance, and that Victor Serge is one of the outstanding personalities representing the socialist aspect of humanism.”

But it was in his novels (of which seven survive) that he best succeeded in re-creating the psychological, intellectual, and physical atmosphere (and above all the human dimension) of the tragic and heroic struggles in which he was so deeply involved. Serge conceived of writing as an act of witness, “as a means of expressing for people what most of them live without being able to express, as a means of communion, as a testimony about the vast life that flows through us whose essential aspects we must try to fix for the benefit of those who will come after us.” The values that inform his work are those of sincerity, solidarity, and truthfulness.

Paradoxically, Serge turned to literature at the very moment when Russian writers were being forced to deny these values. By 1930, the freedom and creative ferment of the Soviet literary renaissance of the 1920s, in which Serge had taken part as a critic and translator, had been crushed by the Stalinist bureaucracy. Serge, however, although a Soviet citizen, wrote in French and published mainly in Paris. This circumstance allowed him to continue the literary experiments of his Russian friends and colleagues—Babel, Esenin, Gladkov, Mandelstam, Mayakovsky, and Pilniak, among others—whose voices were silenced by censorship, suicide, and deportation. His work thus represents a unique strand of continuity in Russian writing between the creative flowering of the 1920s and the post-Thaw dissidence in that it escapes the straightjacket of Stalinist socialist realism.

Serge is also unique in other ways: Although a committed Marxist with a long experience of the workers’ movement, he was also a literary modernist who was unafraid to borrow from “decadent” influences like Freud and Joyce. Moreover, Serge was at one and the same time a “proletarian” writer, who lived in poverty and worked with his hands (he was a printer by trade) throughout much of his life, and a mature, fully fledged literary artist. A born novelist, a man of universal culture who had long been aware of his literary vocation and had developed his craft through a long apprenticeship as a journalist, literary critic, translator, and publicist, Serge revealed himself as a writer of extraordinary power with his first novel,
Men in Prison
(1929).

It was his ambition to break the mold of the traditional novel in order to go beyond the limits of the individual self and reach out to that “vast life that flows through us.” He was thus led to abandon the singular “I” for the collective “we” and to replace the individual protagonist with a kind of collective hero. Borrowing techniques from Pilniak, Dos Passos, and the French Unanimists, he created a rapid, fluid style incorporating vernacular elements of slang, documentary journalism, and cinematographic realism. At the same time, the density of his writing, with its simultaneous presentation of external detail and interior monologue, tends to blur the boundaries between past and present, inner and outer life, permitting occasional flights of what can best be described as a cosmic lyricism.

Serge’s first three novels,
Men in Prison, Birth of Our Power
, and
Conquered City
, were written in Leningrad, where he was living in “semi-captivity,” and published in Paris between 1929 and 1932. They comprise an informal trilogy chronicling the birth pangs of the revolution. Shortly after the publication of
Conquered City
, Serge was arrested and interrogated for months in the notorious Lubyanka GPU prison. As he steadfastly refused to confess and there was no evidence against him, he was administratively deported to Orenburg on the Ural River, where because of his unbending attitude of opposition, he was denied work and nearly starved to death.

Although a captive in Orenburg, Serge was free to write, and ironically he survived on the postal insurance payments he received for manuscripts sent to Paris that were mysteriously “lost” in the mail. He nonetheless completed two more novels of his cycle.
The Lost Men
depicted the tragedy of the 1911 anarchist bandits of Paris and would have preceded
Men in Prison
in the series.
The Whirlwind
, set in 1920, followed on
Conquered City
and was “devoted to the year of the Russian revolution which was richest in hope and perhaps the greatest in energy deployed.” Both were confiscated by the GPU and have not been recovered. As Serge wrote in 1940: “They have shot all the men who made the greatness of those times: it is natural that they should kill the works in which that greatness was reflected.”

In Orenburg, during the years before Stalin’s world-shaking blood purges of the Old Bolsheviks, Serge was thrown in with a group of exiled Trotskyites and revolutionary dissidents whose courageous struggle to maintain their socialist ideals in the face of Stalinist lies and persecutions later inspired what is perhaps Serge’s most poignant and moving novel,
Midnight in the Century
, to which we will turn in a moment. In 1936, after an international campaign in his favor, Serge was expelled from Russia (like Aleksandr Solzhenitsyn some thirty years later).

Playing it Cool (Sydney Smoke Rugby) by Amy Andrews
Sunset and Sawdust by Joe R. Lansdale
Pisando los talones by Henning Mankell
His Christmas Virgin by Carole Mortimer
Familiar Strangers by Standifer, Allie
Dancing Aztecs by Donald E. Westlake
Stacked Up: Worth the Fight Series by Sidney Halston
The Blind Side by Michael Lewis
Shadow of Doubt by Terri Blackstock
The Fleet by John Davis