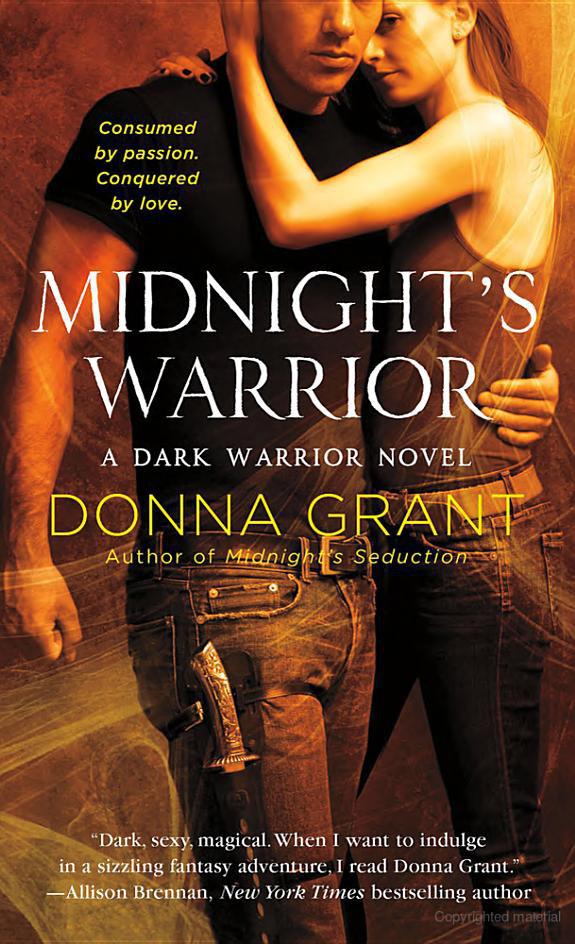 For Lisa Renee Jones, sister of my heart.

As always my thanks goes first to my brilliant, fabulous editor, Monique Patterson. I’m so very blessed to be working with such a wonderful person, and talented editor. Thank you. For everything.

To Holly Blanck and everyone at St. Martin’s who helped get this book ready, thank you.

To my extraordinary agent, Amy Moore-Benson. Thank you!

A special note to Melissa Bradley, Kim Rocha, Rasit Ra (Maria). Thanks for everything you all do. Y’all make my life easier, and for that, I owe each of you so very much.

To my kiddos, parents, and brother—A writer makes sacrifices when writing, but so does the writer’s family. Thanks for picking up the slack, knowing when I’m on deadline that I might not remember conversations, and for not minding having to repeat things.

And to my husband, Steve, my real-life hero. You never mind spending dinners talking about upcoming battle scenes or helping me work through a spot I’m stuck in. Thank you for the love you’ve given me, for the laughter you brought into my life, our beautiful children, and the happily-ever-after life I always dreamed of. I love you, Sexy!

Tara tapped her toe beneath her desk as she discreetly listened to her iPod in one ear. She quite enjoyed her job as a booking agent, tour guide, bookkeeper, and anything else they needed at the castle.

Tara had stopped at the medieval castle to eat and stretch her legs. She’d been instantly taken with the structure and took the tour of it. To her surprise there had been a position open, and she’d applied. She’d started work that very day.

It had only been a few weeks, but she was thoroughly enjoying her time at Dunnoth, which she hadn’t expected after teaching. Yet, she found the quiet and peace of the castle and the North Sea helped to settle the turmoil inside her.

It also helped that the owners were pleasant, her coworkers friendly, and the tourists so eager to learn about the castle that they weren’t much of a problem to handle.

Although tourism in the middle of January in the far north of Scotland wasn’t much to talk about. Most tourists were at the ski resorts, but come summer, the castle was going to be very busy.

Tara looked forward to it. For now, she was reading over the accounting books to make sure everything was in order, and taking bookings for the castle for the summer months.

A door opened to her left and in walked the newest member of the castle employees. Tara’s mouth had dropped open the first time she saw the tall, black-headed hunk with the amazing gray eyes that seemed to see right into her soul.

That had been the day before. And now, she found herself staring at him again as he walked across the entryway and began to work on the electrical outlet that had shorted out months ago.

Though this time she did manage to keep her mouth closed and not make a complete fool of herself.

He filled out the navy short-sleeved tee to perfection with his thick shoulders and muscular arms. Yesterday evening they’d been hit with a rain and snow mix, and he’d gotten caught in it. When he’d come rushing into the castle with his shirt plastered to his abs, she’d been able to count each and every muscle in that washboard stomach of his.

The sight of it had made her wish she could see him without his shirt on to get a good glimpse of that tanned skin and ripped body.

Tara smiled. She’d always been a sucker for a man who knew how to take care of himself. But with Ramsey it wasn’t just his body.

It was his long, black hair that hung past his shoulders with just a hint of a wave to the shiny locks. He kept it pulled away from his face in a ponytail, but she longed to see him with it down.

Then there was his face. She sighed. And what a face it was. Sculpted jaw with just a small shadow of whiskers, square chin, strong nose, and a high forehead with black brows slashed over his eyes. His lips were full and wide, and he had eyelashes so thick, so black, that any woman would be envious. His steel-gray eyes held a hint of laughter in them, as if he knew far more than anyone around him, and he wasn’t going to share.

A shiver raced over Tara’s skin every time he spoke, as if her body were dialed into his husky voice. “Morning, Ramsey.”

“What are you listening to?” he asked. He stopped at the wall and bent to open his toolbox and pulled out a couple of tools.

Ramsey glanced at her and smiled. “Your music, lass. What are you listening to?”

“Ah … Rihanna,” she answered, still baffled that he had known she had her iPod on. She had turned it down low enough so that no one would hear, and the cords to her earplugs were hidden by her hair.

Tara’s heart began to pound as her mind raced. Had the Warriors found her again? She scooted her rolling chair back, prepared to grab her purse and keys and run.

Until she spotted the white cord against her black sweater.

She looked at Ramsey to find him staring at her. After a moment, he shrugged and turned his back to her.

Tara released a long sigh and put her elbow on the desk before she dropped her head into her hand. She was so paranoid. She hated living her life this way, but for her, there wasn’t another way.

Because she was a Druid. And not just any Druid.

She was a dangerous one.

Tara squeezed her eyes closed and thought over the past ten years of her life. It wasn’t that she had had a good or bad childhood. It had been average, just like her grades in school.

Hell, she had been average. Average height, average looks, average clothes, average everything.

She had known since she was a small child that she had magic. It ran strong through her family, and it never worried her. That is, until the day of her eighteenth birthday and she learned far more about the Druids than she had ever been told before.

Her family had lied to her all those years before, telling her that all Druids were the same. Not only were there two different kinds of Druids—
mies,
the good Druids, and
droughs,
the ones who dabbled in black magic and gave their souls to the Devil—her family were all
droughs.

That wasn’t what bothered her. What had made her run from her family was their insistence that she become
drough
as well. They demanded she give her soul to Satan, which would have condemned her to Hell when she died.

For some odd, inexplicable reason, that didn’t bother anyone in her family. Just her. And they didn’t understand her. Not that they ever had before.

Tara hadn’t wanted anything extraordinary out of life. She had just wanted a simple life. A husband who loved her, children surrounding her, and a house filled with lots of laughter.

Instead, she now couldn’t stay anywhere too long before she had to leave again. Already she had spent ten years in Scotland, which was most likely ten years too long. She should have left and gone somewhere else when she ran away from her family, but she loved Scotland too much to leave.

However, she knew this was her last stop in her beloved land. She was going to have to leave. And it saddened her.

It was just five days until her birthday. She had always thought by the time she reached twenty-eight she’d have at least two children.

Instead, she was alone.

She didn’t even allow herself to make friends, because friends asked questions and became curious about her past. And she hated lying. So, she kept to herself.

There had been one time she made the mistake of thinking someone was a friend. But Declan Wallace had been anything but.

To this day she didn’t know how he had found her in that pub in Aberdeen, but his good looks, charm, and silver tongue had done the trick for a scared, confused eighteen-year-old who had run away from home.

Tara should have known what kind of man he was, but she blamed her emotional state for having overlooked it. She had stayed at his mansion for a month before she learned he was a Druid.

When he didn’t push her to undergo the ceremony to become
drough,
she worked with him on strengthening her magic for several more months. Tara had been careful about how much she used her magic. No one, least of all her, understood why her magic was so out of control.

But Declan had pressed her to use more of it, to learn to control it. He hadn’t understood her reluctance, and she hadn’t told him. Nothing had worked, yet he hadn’t been upset. He seemed to enjoy the fact that her magic was all over the place. If her emotions were high, she could blow up a lightbulb without even trying.

Then, one night, she hadn’t been able to sleep and she’d ventured downstairs to get something to eat when she’d overheard Declan’s plans for her.

Once again Tara was on the run.

She knew eventually she would be caught. Would it be by her family? The Warriors hunting her? Or Declan? Who among them would end her life? Would they come in the middle of the night, or in the light of day? Did it even matter anymore?

She jerked at the feel of Ramsey’s hand on her arm. “Yes?” she asked as she tugged the earphone out of her ear.

“Are you all right?” His brow was knit, his gray eyes full of concern.

He raised a thick black brow and flattened his lips. “I doona believe you’re telling me the truth, but I willna press you.”

The heat of his body seared her skin through her sweater where his hand was, but it didn’t hurt. What it did was cause her blood to heat and made her think of leaning close and pressing her lips against his.

She cleared her throat and looked away from his hypnotic eyes. “I’m fine. Really,” she said, and plastered on a smile as she glanced at him.

He released her and stepped back. Instantly she missed his nearness, his touch, and his heat. How he could walk around in a short-sleeved tee in this frigid January weather, with the snow outside several feet thick, she didn’t know. But she wished she could do the same.

Maybe I Will by Laurie Gray
Leviatán by Paul Auster
Sail Away by Lisa Jackson
Summer Snow by Pawel, Rebecca
Jim Steinmeyer by The Last Greatest Magician in the World
Alexis: Evil Reborn by Barcroft, Nolan
Rebel Heiress by Jane Aiken Hodge
Rise of the Mare (Fall of Man Book 2) by Jacqueline Druga
Alarums by Richard Laymon
Mr. Macky Is Wacky! by Dan Gutman