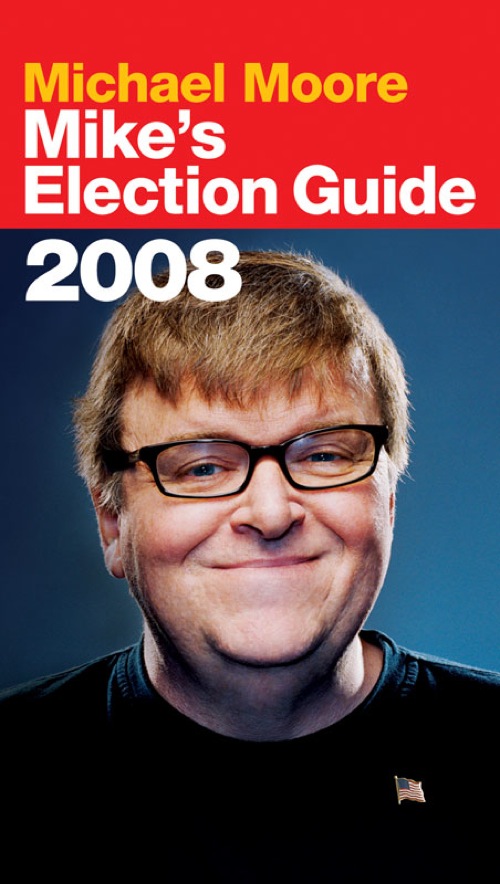 2: How to Elect John McCain

5: One Last Job to Do When the Election Is Over

Will They Ever Trust Us Again?

by MICHAEL MOORE and KATHLEEN GLYNN

Adventures in a TV Nation

For Tony Benn, keep teaching us

In memory of Shirley Chisholm, my first vote for President

Sam Graves of Missouri has a problem. He’s a Republican
and
a member of Congress—and he’s scared he may lose his seat in this year’s election.

So he had an idea. He produced a TV ad where he doesn’t mention that he is either a Republican OR a member of Congress! He believes that if the voters don’t know either of these things about him, his chances of winning re-election are greatly improved.

How did we reach the point where a Republican from the South is frightened for his political life, afraid to even tell anyone he’s a
Republican?
How did the word “Republican” replace “liberal” as the dirtiest word in politics?

Republican Congressman Tom Davis of Virginia sums up the problem this way: “The Republican brand is in the trash can. . . . If we were dog food, we’d be taken off the shelf.”

After a disastrous war, the failure to catch bin Laden, millions of families losing their homes, the Katrina debacle, soaring gas prices feeding record oil company profits, and the largest national debt caused by the biggest spending and borrowing administration in American history, the country has had it with conservatives, right-wingers, and Republicans.

A thrilling election season is now upon us. Obama vs. McCain. One candidate has promised a presidency different from any other, one that will take us forward to embrace the hope of the twenty-first century.

The other candidate says he has no idea how to use a computer.

Welcome to
Mike’s Election Guide,
my effort to make sense of this fall’s race for the White House and Congress. Herein I answer the nation’s most pressing questions: “Why Is John McCain So Angry?” “Do the Democrats Still Drink from a Sippy Cup and Sleep with the Light On?” “Can I Get into the Electoral College with Only a 2.0 GPA?” and “How Many Democrats Does It Take to Lose the Most Winnable Election in American History?”

It’s a great year to be an American and a voter. Don’t miss out on all the fun! And if you see Congressman Sam Graves of Missouri, give him a big shout-out: “Yo! REPUBLICAN!”

It’s not the voting that’s democracy, it’s the counting.

Michael Moore answers questions on the street from the American people about voting, the 2008 presidential candidates, and the issues facing the nation.

Seven years ago, in order to defeat the terrorists, I took the president’s advice and went shopping. I have now rung up about $30,000 of debt on my credit cards, and the monthly payment on my adjustable rate mortgage has doubled. Have the terrorists won?

ANSWER:
No they haven’t! You won. We won. We won because YOU went shopping. You, the American public, decided to let the terrorists have it. You went to the mall, I went to Best Buy, she hit Sam’s Club, he went to the Hummer dealer, we all went to the bank to take out another mortgage, and everyone went to Disney World
and
Disneyland! You shopped but you never dropped. You spent money you never had just like our brave President who spent money
he
didn’t have. Now you, we, are in debt up to our eyelashes—and the terrorists are on the run.

Thanks to this newfound patriotism, Americans are now carrying more personal debt than at any time in our history. And because you, my fellow citizens, have been so willing to wage this war on terror, the credit card industry has seen profits rise from $27.4 billion in 2003 to $40.7 billion in 2007. And when you help American industries like this do well, that means
you
will do well. Because the next time you want a loan,
they
will have the money—
your
money—to lend back to you at a higher interest rate. That, my friends, is the beauty of Capitalism, and don’t you ever forget it.

Ah, how great it feels to be winning the War on Terror, one strip mall at a time. Now, of course, no war is without its casualties. Unfortunately, during all this shopping, some people have gone under. Ten times as many bankruptcies are being filed today than during the Great Depression. Thirty million people have had their credit ratings ruined because they said “charge it” one too many times. And analysts predict that nearly 1.4 million homes will be foreclosed on in 2008 alone, a number unlike anything we’ve ever seen.

But what war doesn’t have some collateral damage? So a million homes are snatched from hard-working Americans! THAT’S A SMALL PRICE TO PAY FOR FREEDOM!! If you want to be free from terrorist bombings, then you have to be willing to sacrifice, sacrifice, sacrifice! Sacrifice in order to defeat the enemy. And the enemy, my fellow Americans, is
not
the banks or MasterCard or Countrywide Financial. These companies are there to hand you the weapons you need to shop and buy. Unfortunately, not all soldiers in the fight against the terrorists know how to use their weapons. So we experience some fratricide. Stuff happens.

The important thing to remember here is that the terrorists have lost! OUR WAY OF LIFE has won! Yes, we will gladly strip naked at the airport if we have to. Yes, we will pay whatever the pump tells us to pay. Yes, you can listen in on my phone calls and read my private emails—hell, you can put a friggin’ drill in my head and insert a thought-control chip on my frontal lobe—
just as long as you promise me that I will be safe and the terrorists will be defeated!
Wait, wait—is that a
100-inch
plasma screen TV I see over there in the window? I have to have it! I must protect America and kill more terrorists!!

I’m doing my best to support the troops, but I just can’t make up my mind: Should I buy a magnetic yellow ribbon for the back of my car, or should I simply fly a big American flag on the back of my Dodge Ram?

ANSWER:
The big magnetic yellow ribbon with the imprint, “Support Our Troops,” seems to be the popular choice. Although there are reports that on lesser-model Pontiacs the paint under the decals tends to bubble up and explode, most consumer Americans have been quite satisfied with them. It gives them a certain “patriotic” feeling. But even more, it allows the consumer American to do something that contributes significantly to the war effort—and nothing says “I Sacrificed!” like a big magnetic yellow ribbon on the back of your kick-ass SUV. The great thing about the magnetic sticker is that you don’t have to permanently affix it to your nice new car. Why risk having to spend 20 bucks on some touch-up paint when you try to peel a real sticker from it? I mean, we love America and all, but 20 bucks is 20 bucks! Plus, with all the shopping we’ve done to defeat the terrorists, why make this whole sticker thing more trouble than it needs to be? I’m worn out just thinking about it. This patriotism business can be exhausting.

But we do it anyway. We do it because we know how good it makes our troops feel. Riding around in Baghdad, though they may not be fully protected with the armor we promised, at least the soldiers know that the America they are protecting is full of people on their way to the outlet mall with big yellow magnetized shout-outs next to their “Bite Me, I’m Yours” bumper stickers.

True, those with the yellow ribbons may oppose paying the necessary taxes to fund the war and thus leave this debt for their grandchildren, but, heck, that’s what grandchildren are for! And what quadriplegic vet doesn’t get all misty-eyed when he looks out the window of his rat-infested room in the Walter Reed annex and sees a patriotic decal on the back of a Mercedes as it whizzes by on its way to Chevy Chase? It almost makes him want to re-up for Uncle Sam.

And while 400,000 vets wait in line for their disability claims from this war, they can at least take some comfort from the sea of ribbons flowing down the street. Sure, these vets are finding it hard to get a job—and thousands have come back to find their boss handing them a pink slip—but I’m sure many of them have a real sense of satisfaction knowing that the country they went to fight for has sent their jobs—including the job of making magnetic yellow ribbon decals—to China.

(Some vets have this suggestion for a 2009 version of the magnetic yellow ribbon: Have it read, “Support Our Troops” on one part of the ribbon and “Bring Them Home” on the other loop.)

If Iran has weapons of mass destruction, we should invade, right?