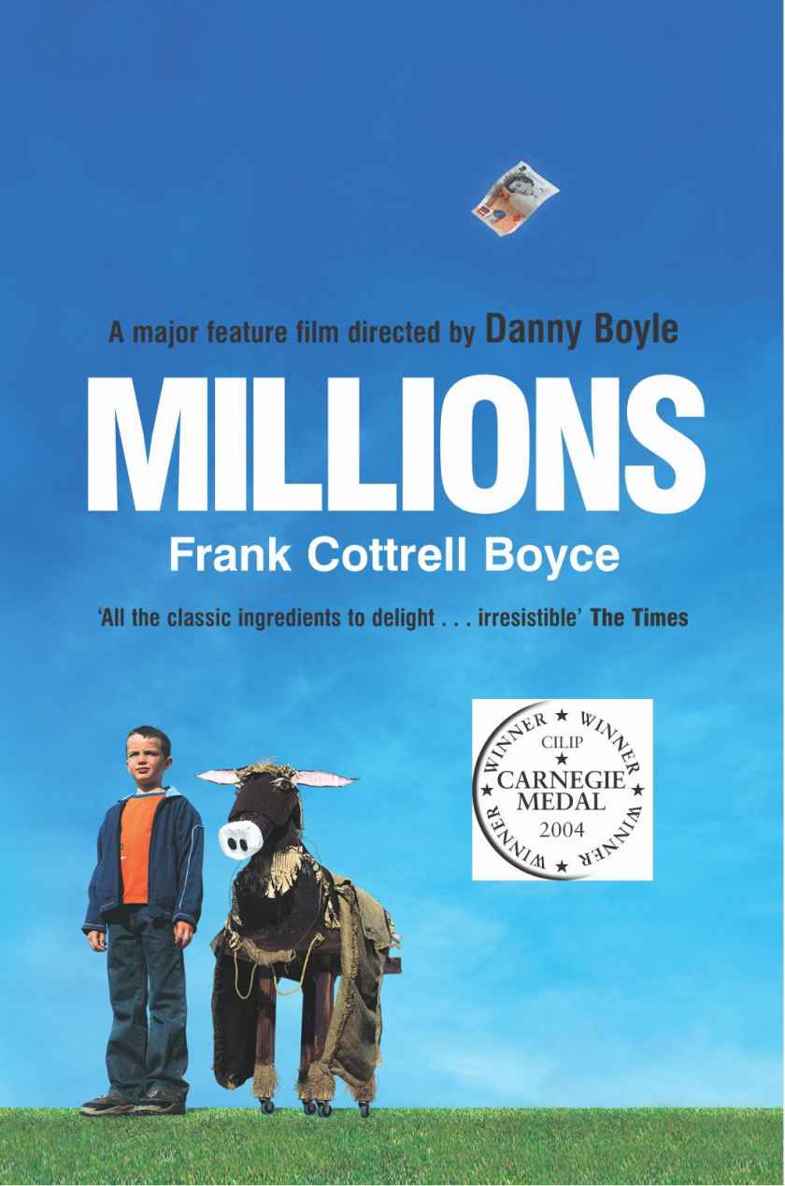 Frank Cottrell Boyce
is a screenwriter whose films include
Welcome to Sarajevo
,
Hilary and Jackie
and
24 Hour Party People
.
Millions
is his first book.

Frank lives in Liverpool with his wife and family of seven children. He is not a millionaire and has no plans to rob a bank. However, during a short-lived career as a Punch and Judy man’s assistant, Frank earned a fortune entirely in small change. He believes this is how he first became interested in the problems created by user-unfriendly cash

‘Written with charm and humour, this is a touching, absorbing oddity of a book about love, grief, avarice and generosity’
Sunday Times

‘Both funny and poignant. What, after all, is money for? Cottrell Boyce is a writer who can engage readers in such questions whilst also making them weep with laughter’
Books for Keeps 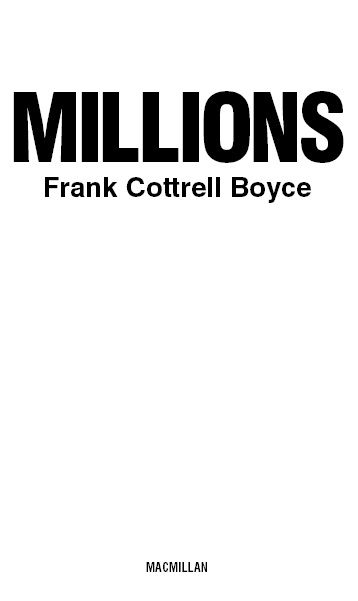 Many friends have wittingly and unwittingly helped me with this book. I’d like to thank Anand Tucker, Roger Ebert, Julian Farino, Graham Broadbent, Damian O’Donnell and my brilliant editor, Sarah Dudman.
My biggest debts, however, are to Danny Boyle – whose courageous faith in people is a miracle in itself – and to my wife, Denise, who actually is a saint.

I’d also like to thank WaterAid for making the World a better place.
For further information on WaterAid, please see www.wateraid.org

The right of Frank Cottrell Boyce to be identified as the author of this work has been asserted by him in accordance with the Copyright, Designs and Patents Act 1988.

Visit www.panmacmillan.com to read more about all our books and to buy them. You will also find features, author interviews and news of any author events, and you can sign up for e-newsletters so that you’re always first to hear about our new releases.

If our Anthony was telling this story, he’d start with the money. It always comes down to money, he says, so you might as well start there. He’d probably put, ‘Once upon a time there were 229,370 , little pounds sterling,’ and go on till he got to, ‘and they all lived happily ever after in a high-interest bank account.’ But he’s not telling this story. I am. Personally, I like to start with the patron saint of whatever it is. For instance, when we had to write about moving house for Literacy Hour, I put:

We have just moved house to 7 Cromarty Close. The patron saint of moving house is St Anne (1st century). She was the Mother of Our Lady. Our Lady did not die but floated up into Heaven while still fairly young. St Anne was upset. To cheer her up, four angels picked up her house and took it to the seaside in Italy, where it can be seen to this day. You can pray to St Anne for help with moving house. She will watch over you, but not do actual removals. Anne is also the patron saint of miners, horse-riding, cabinetmakers and the city of Norwich. While alive, she performed many wonders.

The patron saint of this story is St Francis of Assisi (1181–1226 ), because it all sort of started with a robbery and the first saintish thing he ever did was a robbery. He stole some cloth from his father and gave it to the poor. There is a patron saint of actual robbers – Dismas (1st century) – but I’m not an actual robber. I was only trying to be good.

‘See that?’ said Dad as he left us at the gates. ‘Good isn’t good enough here. Excellence, that’s what they’re after. My instruction for the day is, “Be excellent.” The instructions for supper I’ll leave on the fridge door.’

One thing about me is that I always really try to do whatever Dad tells me. It’s not that I think he’ll go off and leave us if we’re a problem, but why take that risk? So I was excellent first lesson. Mr Quinn was doing ‘People We Admire’ for Art. A huge boy with a freckly neck nominated Sir Alex Ferguson and listed all the trophies United had won under his stewardship. A boy called Jake said players were more important than managers and nominated Wayne Rooney for individual flair. Mr Quinn was looking around the room. To be educational about it, football was not taking him where he wanted to go. I put my hand up. He asked a girl.

‘It doesn’t have to be a footballer.’

I used my other hand to hoist my hand up higher.

‘Damian, who do you admire?’

By now, most of the others were into players versus managers.

The others stopped talking.

The others went back to football.

‘He caught the plague and hid in the woods so he wouldn’t infect anyone, and a dog came and fed him every day. Then he started to do miraculous cures and people came to see him – hundreds of people – in his hut in the woods. He was so worried about saying the wrong thing to someone that he didn’t say a word for the last ten years of his life.’

‘We could do with a few like him in this class. Thank you, Damian.’

‘He’s the patron saint of plague, cholera and skin complaints. While alive, he performed many wonders.’

‘Well, you learn something new.’

He was looking for someone else now, but I was enjoying being excellent. Catherine of Alexandria (4th century) came to mind. ‘They wanted her to marry a king, but she said she was married to Christ. So they tried to crush her on a big wooden wheel, but it shattered into a thousand splinters – huge sharp splinters – which flew into the crowd, killing and blinding many bystanders.’

By now everyone had stopped debating players versus managers. They were all listening to me.

‘After that they chopped her head off. Which did kill her, but instead of blood, milk came spurting out of her neck. That was one of her wonders.’

‘She’s the patron saint of nurses, fireworks, wheel-makers and the town of Dunstable (Bedfordshire). The Catherine wheel is named after her. She’s a virgin martyr. There are other great virgin martyrs. For instance, St Sexburga of Ely (670–700 ).’

Everyone started laughing. Everyone always laughs at that name. They probably laughed at it in 670–700 too.

‘Sexburga was Queen of Kent. She had four sisters, who all became saints. They were called—’

Before I could say Ethelburga and Withburga, Mr Quinn said, ‘Damian, I did say thank you.’

He actually said thank you three times. If that doesn’t make me excellent, I don’t know what does.

I was also an artistic inspiration, as nearly all the boys painted pictures of the collateral damage at the execution of St Catherine. There were a lot of fatal flying splinters and milk spurting out of necks. Jake painted Wayne Rooney, but he was the only one.

In the dining hall, a boy on Hot Dinners came and waggled his burger under my nose and said, ‘Sexyburger, sexyburger.’ All the people round the table laughed.

I found this very unenlightening and was about to say so when Anthony came and sat by me and they all stopped.

We had ham and tomato sandwiches and two small tubes of Pringles. I said, ‘I’ve been excellent. What about you?’

He whispered, ‘You are making yourself conspicuous. You need to blend in more. People are laughing at you.’

‘I don’t mind being laughed at. Persecution is good for you. They laughed at Joseph of Copertino until he learned to levitate.’

The huge boy with the freckly neck came and sat down. His belly caught the end of the table and tipped it up. My tube of Pringles rolled towards him. He picked it up and opened it.

‘They’re his,’ said Anthony, pointing at me.

‘And who are you?’ asked Freckle Neck.

‘You’re not that big. All Pringles belong to me.’ A dandruff of crumbs fell from his mouth. ‘School policy.’

‘You can’t take his Pringles. He’s got no mum.’

‘How can he have no mum? Everyone’s got a mum. Even people who’ve got no dad have got a mum. I’m enjoying these, by the way.’

Freckle Neck stopped crunching and handed my Pringles back. He said his name was Barry.

‘Nice to meet you, Barry.’ Anthony offered him his hand to shake. Anthony believed in making friends. ‘Where do you live?’ he asked.

‘Over the bridge, next to the twenty-four hour.’

My brother is very, very interested in real estate.

On the way to the playground, Anthony said, ‘Works every time. Tell them your mum’s dead and they give you stuff.’

Take Me Under by Rhyannon Byrd
Migration by Julie E. Czerneda
A Chance in the Night by Kimberly Van Meter
Out of Time (Nine Minutes #2) by Beth Flynn
Fade by Viola Grace
Stolen: Warriors of Hir, Book 3 by Danes, Willow
Serve His Needs - Destination by Karolyn James
Unveiled (Vargas Cartel #2) by Lisa Cardiff
The Legend of Thunderfoot by Bill Wallace
Keep Me (Shelter Me #3) by Kathy Coopmans