Miracle on the 17th Green 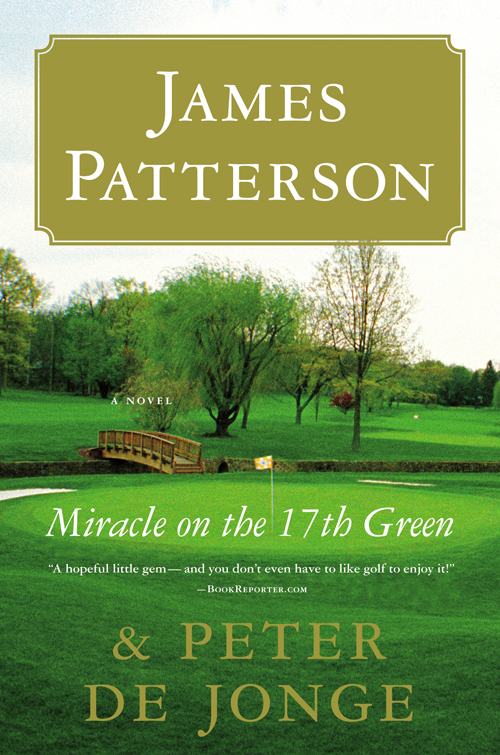 SUMMARY:
And with his wife, children, and a live television audience watching, a miracle takesplace on the 17th green that will change Travis, and his family, forever.

Along Came a Spider

Miracle on the 17th Green

For Matthew and Joseph.

For the good folks of Toms River and Sleepy Hollow.

Part 1:
A Little Noise from Winnetka

A Little Noise from Winnetka
Chapter 1

It was Christmas morning and a balmy 38 degrees. In other words, a perfect day for golf, and there I stood on the semifrozen mud of the 17th tee at the Creekview Country Club in Winnetka, Illinois.

My marriage was disintegrating. My three kids, whom I love more than life itself, didn’t know what to make of me lately, and I had a terrible feeling that come January, I was going to be fired from my job at Leo Burnett. Who knows, if everything went as badly as it possibly could, there was a chance I might be one of the homeless after that.

I bent down, teed up an old scuffed Titleist, and squinted through the wind at the long tight par 5, lined on both sides by towering black leafless elms.

Now what follows is one of those mystical, largely unexplainable,
out-of-body experiences, so please bear with me. Or as Vin Scully used to say at the start of his golf telecasts, pull up a chair and make yourself comfortable. I admit that in sheer unlikelihood, this probably ranks right up there with Truman upsetting Dewey,
It’s a Wonderful Life
, and John Daly winning the British Open.

What can I say? Stuff happens to people. Tragedies befall saints. Fortune smiles on cretins. Extraordinary things happen to ordinary people. And this happened to me.

Since it is such a crucial number in this story, I should point out that I was starting my round on 17. Despite the unseasonable thaw, it
was
Christmas, the course was empty, and 17 just happened to be the tee closest to where I parked. Anyway, I knocked the cover off my drive.

I trudged down the fairway, nudged my ball away from a sprinkler head, and hit my second shot, a 185-yard, 5-iron, stiff. Suddenly, I was feeling better. To hell with my problems. Golf can have that effect.

Now, here comes the weird part. This is where everything gets a little spooky, and I took my first step on this road — either to salvation or damnation.

I stroked that putt so clean and solid.

I put such a pure sweet roll on it, the ball traveled over the grass like a bead of mercury rolls across the floor after you break a thermometer.

The beginning of a miracle. A harbinger. A sign.

I must tell you right now however, that this isn’t the so-called Miracle on 17. Not even close.

I hurried to the next tee.

I know what you’re thinking. What’s the big deal about a nine-foot putt in a practice round on a deserted golf course in the dead of winter, with the only witness a skinny red squirrel who had hopped onto the green in search of an acorn or two?

Let me give you a little quick background.

Except for tap-ins and your basic no-account three- or four-footers, I don’t make putts less than twelve feet. My nickname, borrowed in a most unflattering way from the former world welterweight champion Roberto Duran, is “Hands of Stone.” In spite of that, I’ve been club champ here at the Creekview Country Club in Winnetka five out of the past twelve years.

But it wasn’t just that the putt on 17 went in. Everybody gets lucky sometime.

It was
how
the putt went in.

It didn’t creep in the side door, or dribble in the front, or start off-line and get corrected by a spike mark. It was dead center from the instant it touched off my blade until it rammed home with all the subtlety of a Shaquille O’Neal dunk.

But even more important was the
feeling
I had as I stood over the putt.
I knew it was going in
.

Knew it in my hands, shoulders, legs, and bones.

Knew it with a degree of certainty that was almost spooky.

It was like something that had already happened, and all I had to do was patiently wait for the present to catch up.

For the first time in forty years, I could actually
see the line
. My nickname notwithstanding, my putting problem was never really my touch. It was in my eyes, or somewhere behind them in the plumbing of my brain. Does it break three inches or two? Does it break at the beginning or the end? Your guess was as good as mine.

But that morning as I stood with my eyes directly over the Titleist logo, my putting dyslexia was cured. It was as if someone from the Winnetka Highway Department had painted a dotted white line between my ball and the hole. Or better yet, had laid a small stretch of track about the size of my younger son, Noah’s, train set, and all I had to do was get the ball started right and then watch it roll as if it were on rails into the center of the cup.

But, as I said before, this isn’t the miracle I’m trying to tell you about.

Like a middle-aged man who suddenly discovers Santa Claus is real after all, I raced to the next hole. I thumbed a tee into the cold dirt and smacked another solid drive out over the deserted course.

For the next few hours, I raced around the blighted landscape in a birdie-feeding frenzy.

After rolling in a fifteen-footer on 18, I jogged back over to I and played a full eighteen, then another nine, then nine more. In thirty-eight holes, I one-putted twenty-nine greens, had twenty birdies, and in four nines didn’t post a score above 33. Time seemed to stand still.

During one unconscious stretch, where I birdied four holes in a row, my heart started beating so fast I had to lean against a tree and make myself take a few slow breaths.

I was afraid I was going to keel over and buy the farm right then,
cut down — as it were — in my prime. And I don’t know what would have annoyed me more — dying, or dying before I had a chance to tell anybody about these scores.

But my reverie was suddenly broken.

Standing on the 16th green for the third time that day, I happened to look out over the evergreens beside the fairway. There, wafting above the treeline, tethered to a nearby house, was a helium-filled Santa balloon.

Miss Greenhorn by Diana Palmer
His Untamed Desire by Katie Reus
A Taste of Sauvignon by Heather Heyford
Firewall by Andy McNab
The Question of the Unfamiliar Husband by E. J. Copperman
Trial by Desire by Courtney Milan
The Island by Lisa Henry
Good by S. Walden
Finally, Forever by Kacvinsky, Katie
Way Down Dark by J.P. Smythe