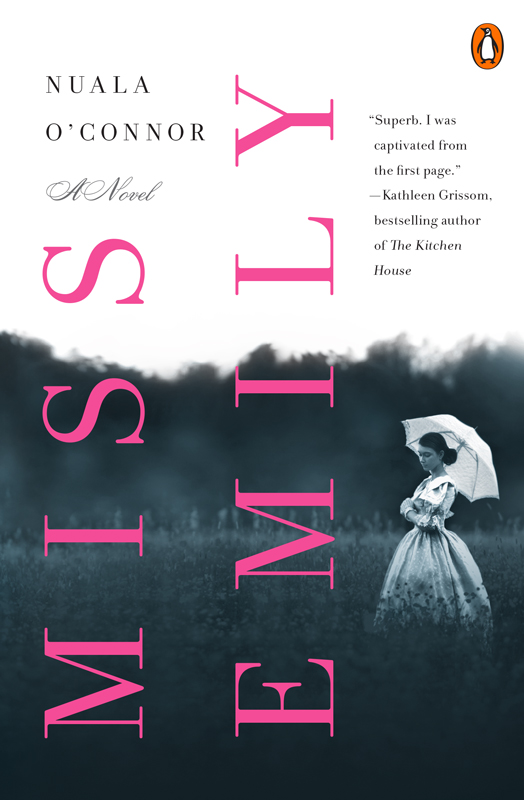 “A jewel of a novel,
Miss Emily
by Nuala O'Connor is a fascinating, heartfelt, and captivating glimpse into the mind and heart of Emily Dickinson, one of America's most beloved poets, interwoven with the story of her spirited, witty, and devoted Irish maid, Ada. With its luminous prose and sympathetic, realistically drawn characters, you will feel yourself irresistibly drawn into Emily's and Ada's private worlds with every turn of the page.”

“Like a Dickinson poem,
Miss Emily
seems at first a simple story of friendship, but gradually reveals itself as a profound meditation on the human condition. O'Connor accomplishes this unfolding, just as Dickinson did, with her exquisite use of language. I lost myself in the beautiful detail of 1860s Amherst, a cast of characters that leapt off the page with life, and the constant reminder that words, properly wielded, can transcend time, transmit love, and, above all, inspire hope.”

“An absorbing and provocative take on the inner life of a brilliant poet and her increasingly shrinking universe. The Dickinson household of Amherst, Massachusetts, is complex and very odd indeed and the tension builds toward shocking consequences for all involved. Nuala O'Connor's prose skillfully and lyrically creates Emily Dickinson's voice and that of her young Irish housekeeper, who chronicles the poet's harrowing struggle to find the freedom to write while living a cloistered life at home. A novel you won't want to put down.”

“The structure of the book is reminiscent of one of Emily Dickinson's poems, a lyrical dialogue between two distinct voices. Ada and Emily are divided by class, ethnicity, learning, circumstance; but a deep empathy and shared humanity unite them as women. This is a bittersweet story of repressed passion, thwarted opportunity, and the selflessness that is the essence of love.”

âStephanie Barron, bestselling author of the Being A Jane Austen Mystery series

“
Miss Emily
presents its readers with a version of Emily Dickinson for the twenty-first century: an intensely private and reclusive woman who was as determined to live according to her own idiosyncratic rules as she was to engage on her own terms with the world outside her Amherst home. In the spirit of her beloved Elizabeth Barrett Browning and George Eliot, this fictionalized Dickinson crosses class, national, and religious lines to reach out to her Irish maid Ada with compassion, empathy, and humanity. In eloquent prose, O'Connor has depicted a life-changing encounter between two very different women that celebrates their complexity, passion, and strength.”

“
Miss Emily
is an intricate, intimate novel that, in its careful attention to language, pays homage to our most American poet's extraordinary work. There are references to that work, rewards to true Dickinson aficionados, secreted in O'Connor's prose, but this novel achieves a broader aim too: it tells a story of friendship that keeps us turning the pages.”

âKelly O'Connor McNees, author of
The Lost Summer of Louisa May Alcott
and
The Island of Doves

“An original portrayal of Emily Dickinson seen here not just as a lover of words but as a heroine and friend to a plucky Irish maid who casts a new and sympathetic light on the Belle of Amherst.”

“Secrets will always out. In the same way that Emily Dickenson's poems were once the best-kept secret in Massachusetts, Nuala O'Connor's luminous prose has long been one of Ireland's most treasured literary secrets. Now, through her superb evocation of nineteenth-century Amherst, an international audience is likely to be held rapt by the sparse lyricism and exactitude of O'Connor's writing. Through a fusion of historical ventriloquism and imaginative dexterity, O'Connor vividly conjures upâin the real-life Emily Dickenson and the fictional Ada Concannonâtwo equally unforgettable characters who pulsate with life in this study of the slowly blossoming friendship between a delicate literary recluse and a young Irish emigrant eager to embrace the new world around her.”

âDermot Bolger, playwright, and author of
The Journey Home
and
The Venice Suite

NUALA O'CONNOR
is a well-regarded short-story writer and novelist in her native Ireland, writing under the name Nuala NÃ­ ChonchÃºir, and has won many fiction awards, including RTÃ radio's Francis MacManus Award, the CÃºirt New Writing Prize, the Jane Geske Award, the inaugural Jonathan Swift Award, and the Cecil Day Lewis Award, among others. Her short story “Peach” was nominated for a Pushcart Prize and she was shortlisted for the European Prize for Literature for her short story collection
Nude
. She was born in Dublin in 1970 and lives in East Galway with her husband and three children. 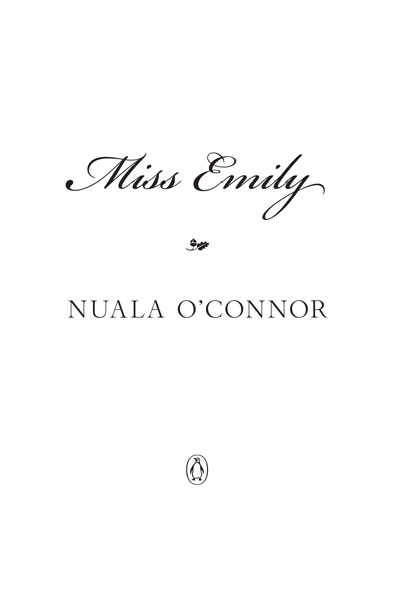 For Emily, for poetry

She was not daily bread, she was star dust.

The Life and Letters of Emily Dickinson

J
ULY AND THERE IS CRISIS.
F
ATHER THROWS DOWN HIS CUTLERY
and says he will not eat one more burnt potato.

“And I will not baste another seam,” I say, glancing at Mother.

“Margaret O'Brien is all but irreplaceable,” Mother says, taking a sip of currant wine. “And there are only four of us, with Austin gone. We are a small household. Yes, Margaret may be missed, but we will manage.”

I think of Margaret, snug now in her marital chambers with her beloved Mr. Lawler, a competent mother to his four orphans. The Lawler house no doubt gleams all around them, and beautifully cooked potatoes steam on their dinner plates. I am silenced by Margaret's defection. Because she toils no more here, I must toil. Am I put out? Yes, I am. Am I anguished? I find that I am.

“Some of us miss Margaret O'Brien dreadfully,” Father says.

I stare at Mother. I do not wish to be regularized. Or regular. My desire is to be free to pursue the things that please me. And why say it to Father anyway? He is only required to enjoy the spoils of others' labor.

“Well, replace the irreplaceable Margaret we must, my dear,” he says. “Emily is permanently floured to the elbows, Vinnie is never without a sweeping brush, and you are becoming too often ill from the weight of the household. Even the hens refuse to perform their duty since we lost Margaret. I shall see about a replacement forthwith.”

I smile around at them all, from Father to Mother to Vinnie. My sister winks at me above the head of the puss she dandles on her lap.

“Do not look so triumphant, Emily,” Mother says.

I change my facial expression to a more Mother-pleasing one but allow myself to feel exultant. I know that when Father decides on something, he applies himself to its execution with vigorous care, and I have privately wheedled, cajoled and begged him to right the situation. Father lives and loves ferociously, and, for me, there is little he will not do. We shall soon have our new maid-of-all-work. My shriven hands will look robust once more. No more hauling scuttles or trying, vainly, to get chicken and mushrooms and gravy to magic themselves ready at the same time. No more will I scrub, peel, milk, feed, wash, lift, scrape and polish. I will bake when the want overtakes me, not when Mother desires a rye loaf or her callers an apple pie. And I will be able to write anytime I please, for as long as I wish, not only in the dull snatches of time between this chore and the next.

I could rise from the table and kiss Father, here and now. Instead I eat the meal before me, knowing that soon we will sample beautifully cooked potatoes again.

Miss Ada Concannon Is Banished to the Scullery

I L
OWER MYSELF INTO THE
L
IFFEY, FIRST TO MY THIGHS AND
then waist-high. It is not too cold; the June days have heated the river, and the water has held the warmth all night. I flop onto my back and push away from the bank with my toes. My underclothes bloom like seedpods. Rose stands at the water's edge, guarding my dress and boots, the swamp stretching behind her. Her eyes are fixed to where I loll in the murky river; she is making sure, I suppose, that I am not about to slip from her life as I so often threaten to do.

I look toward the swamp, then spin on my back so I can see our house, a few fields off. While I float on the water, the village of Tigoora stirs much the same as it does every day. In our house Daddy puts on his jacket and thinks, maybe, about his time on the shivering ocean waves. The baronet and his lady snooze on, no doubt, knowing that the live-ins toil already and the rest of us will arrive shortly. Light seeps upward, diluting the ashen sky. The small ferryboat rocks, waiting to take us across the river to the Big House to begin our work.

“Ada, get out now,” Rose calls. “I can see the ferryman coming. And Daddy, too. He told you not to go in the river.”

I wave to Rose and swim a few strokes on my back. My sister looks like she might weep, so I haul myself out and pull my dress over my soaked underthings. The cloth drags against my wet skin, and Rose tugs at my sleeves and skirt to fix them. I wipe mud from my feet with wads of grass and pull on my stockings and boots.

“Look at your hair,” Rose says forlornly, catching the rope of it and squeezing out drops.