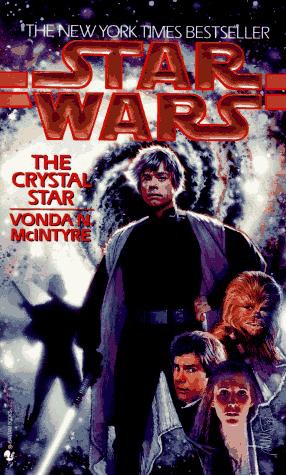 The children had been kidnapped.

Leia ran headlong toward the glade, leaving behind the courtiers and the chamberlain of Munto Codru,

leaving her attendants, leaving the young page who--completely against protocol--had stumbled into

But Leia understood her: Jaina and Jacen and Anakin had been stolen.

Leia ran, now, through the trees and down a soft mossy path that led into her children's playground.

Jaina imagined the path was a starship course, set to hyperspace. Jacen pretended it was a great

mysterious road, a river. Anakin, going through a literal phase, insisted that it was only a path through the

forest to the meadow.

The children loved the forest and the meadow, and Leia loved exclaiming in wonder at the treasures they

brought her: a squirmy bug, a stone with shiny bits trapped in its matrix--rare jewels, perhaps!--or the

fragments of an eggshell.

Her vision blurred with tears. Her soft slipper snared in the tangled moss. She stumbled, caught herself,

and plunged onward, holding the skirts of her court robe high.

and tripped by my own clothing!

Her breath burned in her throat.

And I'd be able to run from my receiveg room to the forest glade without losing my breath!

The green afternoon light shifted and fluttered around her. Before her, the light brightened where the

forest opened into a water-meadow, the meadow where her children had been playing.

Leia ran toward it, gasping, her legs heavy.

She was running toward an absence, not a presence, toward a terrible void.

She cried out to herself, How could this happen? How is this possible?

The answer--the only way it could be possible --terrified her. For a short time, her ability to sense the

presence of her children had been neutralized. Only a manipulation of the Force could have such an

Leia reached the meadow. She ran toward the creek where Jaina and Jacen had splashed and played

and taught little Anakin to swim.

A crater was ripped into the soft grass. The leafy blades had been flattened into a circle around the raw

A pressure bomb had gone off, near her children.

They aren't dead! she told herself. They can't be, I'd know if they were dead!

At the edge of the blast area, Chewbacca lay sprawled in a heap. Blood flowed bright against his

Leia fell to her knees beside him, oblivious to the mud. She feared he was dead--but he was still

bleeding, still breathing. She pressed her hand against the deep gash in his leg, desperate to stop the flow

of blood and save his life. His powerful pulse drove the blood from his body. Like the page, he also bled

from ears and nostrils.

A dreadful, grieving, keening sound escaped him, not a groan of pain but a cry of rage and remorse.

what happened?" He cried out again, and Leia understood that he felt such despair that he wanted to die.

He had adopted her family as his own, his Honor Family, and he had failed to protect the children.

He must. Only he can tell me who stole my children. "Come back! Come back to me!" Her aides and the

chamberlain hurried out of the forest, trampling the delicate high grass, exclaiming in outrage when the

slender blades cut them. Leia's children had wandered the meadow at liberty, neither leaving footprints

nor receiveg any harm. The grass parted before them like magic.

Magic, for my magic children, Leia thought. I thought I had protected them, I thought they could never

come to any harm.

Hot tears ran down her cheeks.

The courtiers and advisers and guards gathered around her.

"Madam, madam," said the chamberlain of Munto Codru. Out here in the wild sun and the wind, Mr.

Iyon's face was flushed and he looked uncomfortable.

"Did you bring the doctor?" Leia cried.

"Get the doctor!" "I sent for her, madam." Mr. Iyon tried to make her get up, tried to take over

staunching the flow of blood from Chewbacca's wound, but she pushed him away with a sharp ^w.

You will not die, she thought. You must not die. I won't let you die!

She drew on her inadequate knowledge to strengthen him. She bitterly regretted the responsibilities of

statecraft that had prevented her from being properly trained in the ways of the Force.

Leia knew that if she allowed Chewbacca's hot blood to gush past her hands, his life, too, would stream

The doctor ran across the field. Her wyrwulf loped behind her, carrying her equipment and supplies. The

It had disappeared as well.

"Not yet!" Dr. Hyos exclaimed. "I have only four hands, after all. The princess is quite all right where she

is." The wyrwulf sat on its haunches between Leia and Dr. Hyos. Leia shuddered. The wyrwulf turned its

massive head, slowly, gently, staring at her with great limpid liquid blue eyes. Its coat was thick and

The doctor's wyrwulf panted and slavered, its tongue lolling over its pitted fangs. Its face was grotesque.

Dr. Hyos's four hands, so languid at rest, moved quickly over the panniers strapped to the wyrwulf's

"Do you see what I am doing, my dear?" she said softly. "The bleeding is most important.

Our princess has stopped it." The doctor spoke to the wyrwulf, explaining everything she did.

Dr. Hyos drew pressure bandages from one compartment as she chose the proper medicine from

another. Always, she told the wyrwulf what she was doing. Her long gold fingers were deft and sure.

Leia allowed herself a moment of hope, even with her hands covered with Chewbacca's hot blood.

He had closed his eyes; he had stopped moving.

"As the bandage seals itself, my princess," Dr. Hyos said, "move your hand from the wound." Leia

obeyed. Dr. Hyos pressed the bandage to Chewbacca's flank. The bandage pressed itself against Leia's

hand, clasped itself to Chewbacca, and wound its connectors through his fur.

The wyrwulf watched, its tongue lolling.

Leia sat back on her heels. Her hands were sticky and her robes were smeared and she viewed

everything in the clarity of horrified belief.

Dr. Hyos examined Chewbacca, frowning over the drying streaks of blood that had trickled from his

Leia remembered, as if from a distant dream, the sound of a single clap of thunder. She had thought--her

thoughts had been so slow--t the morning must have turned from fair to rain; she had thought, fondly, that

Chewbacca would soon bring the twins and Anakin in from the meadow. She could take a moment from

her duties to cuddle them, to admire their newest treasures, to see that they had their lunch.

Now it was mid-afn. How could it be so late in the day, when such a short time ago it had not yet been

"Madam--" Chamberlain Iyon said. But he did not try again to make Leia come away.

"Close the port," Leia said. "Block the roads. Can the page be questioned? Check the port controller--is

there any chance the kidnappers have left the planet?" As she spoke, she feared any measures she might

take would be useless, and if not useless, too late.

But if they've fled, she thought, I could chase them in Alderaan. I could catch them, my little ship can

catch anything--"Madam, closing the port would not be wise." She glared at him, instantly suspicious of

a man she had trusted only a moment before.

"They took your--" She hesitated, unsure what to say.

I understand our traditions, which you--I beg your pardon--d not.

Closing the spaceport is unnec." "The kidnappers will try to escape Munto Codru," she said.

"They will not. There are traditions," he said.

"If we follow them, nothing will happen to the children--that too is the tradition." Leia knew of Munto

Codru's traditions of abduction and ransom. That was why Chewbacca had been staying so close to the

children. That was why extra security surrounded and guarded the ancient castle. For the people of

It was a sport in which Leia did not care to participate.

"It's a most audacious abduction," the chamberlain said.

"And a cruel one!" Leia said. "Chewbacca is wounded! And the pressure bomb--my children--" She

fought for control of her voice andof her fear.

"The coup-counters detonated a pressure bomb only to prove that they could, madam," Mr.

"But no one is supposed to be injured, during your coup abductions!" "No one of noble birth, Princess

"My title is "Chief of Stateea"' sir," she said angrily. "Not "Princess."' Not any longer. The world where I

was a princess is long destroyed. We live in a Republic, now." "I know it, madam. Please forgive our

old-fashioned ways." "They must know they haven't a hope," Leia said. "Of receiveg a ransom, of

escape. And if they should..." She could not bring herself to say the ^w harm.

"Please allow me to advise you in this matter," the chamberlain said. He leaned toward her, intense. "If

you apply the rules of the Republic, disaster--tragedy--w be the result." "The ransomers," Dr. Hyos said,

with every evidence of approval, "must be very brave. But young and inexperienced as well. The family...

which would it be?" She glanced at Mr. Iyon. "The Sibiu, perhaps?" "They have insufficient resources,"

Mr. Iyon gestured to the broken ground, to Chewbacca. "This required a skiff, a tractor beam.

Connections with arms smugglers, to obtain the pressure bomb." "Ah. The Temebiu, then." "It could be,"

the chamberlain said. "They are ambitious." "I'll show them ambition," Leia muttered.

"Madam, please. Your children will not be harmed--cannot be harmed, for the ransomers to achieve

their goals. They may look upon the event as a great adventure--" "Our friend Chewbacca has been

wounded nearly to death!" Leia cried. "My children will not find that amusing. Nor do Iffwas "It is a

shame," the chamberlain said. "Perhaps he did not comprehend the information on our traditions? He was

meant to surrender." "Close the port," Leia said again, her voice tight. She was too angry to respond to

Iyon said. "It is possible... but we must do it carefully. We must do it... in a way to amuse rather than

..." His voice trailed off thoughtfully.

Dr. Hyos checked Chewbacca's pulse at the large vein the wound had come so close to piercing.

"Stable. There. Good. To the surgery with you." Chewbacca, barely conscious, gazed at Leia with

Didn't think I'd ever have to see a battlefield again." "Neither did I," Leia said.

Leia had seldom worried about the safety of Jaina and Jacen and Anakin.

Thought about it, made arrangements for it, certainly; talked about it, with the children's nanny, Winter,

She would be aware of any danger. Her lack of training would not hamper her perception of her children.

Besides, if she somehow did not know of the danger, Luke surely would. Winter would protect the

children with her life. And when Chewbacca accompanied Leia's family, as he so often did, he spent

much of his time with the young ones. Who better to ensure their safety?

The Making of Matt by Nicola Haken
S. by John Updike
Draw the Brisbane Line by P.A. Fenton
Monsoon Mists by Christina Courtenay
Mama Sees Stars: A Mace Bauer Mystery by Deborah Sharp
Abandon by Stephanie Dorman
Cut to the Quick by Kate Ross
Slow Burn (MM) by Sam B. Morgan
A Soldier' Womans by Ava Delany
The Friend of Women and Other Stories by Louis Auchincloss