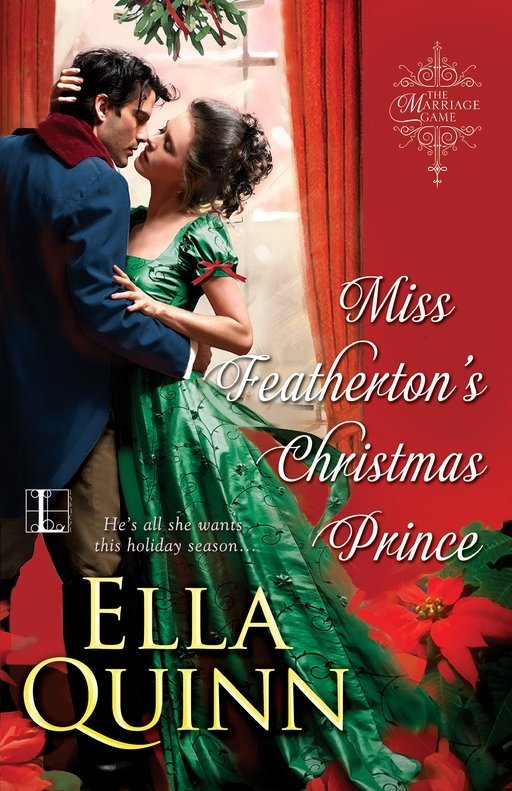 MISS FEATHERTON’S CHRISTMAS KISS
Meg gave a shiver of delight as she reached out and plucked a burning raisin from the bowl. Hawksworth got two of them, handing one to her. Then she did the same.
“You’re very good at this.” His voice was warm with praise.
“So are you.”
Shrieks of laughter filled the room as he leaned close to her. “A passionate game.”
“We have already had this discussion.” Easing herself out of the circle, she murmured, “I need some air.”
Hawksworth caught up to Meg at the end of the long terrace. “What is it about passion you do not like?”
She closed her eyes and counted to ten before turning to face him. “What has passion to do with anything?”
He prowled slowly toward her. The torches reflected the fire lurking in his eyes, making him more dangerous than ever before. She took a step back toward the wall, and before she knew it her back had hit the cold stone.
“If you do not want love, you must at least have passion.” Bracing his hand on the wall next to her cheek, he leaned forward until his breath caressed her face. It was sweet with raisins and brandy.
Before she knew it, his lips were next to hers. The tip of his tongue trailed languidly along her bottom lip, and her knees began to turn to marmalade. “Will you lie in your cold bed with your nightgown on while your husband ruts?” His wicked tongue moved from her mouth to her ear as he whispered, “Or do you want to scream as he takes you to heaven and back?”
Books by Ella Quinn
THE SEDUCTION OF LADY PHOEBE
THE SECRET LIFE OF MISS ANNA MARSH
THE TEMPTATION OF LADY SERENA
DESIRING LADY CARO
ENTICING MISS EUGÉNIE VILLARET
A KISS FOR LADY MARY
LADY BERESFORD’S LOVER
MISS FEATHERTON’S CHRISTMAS PRINCE
Novellas
MADELEINE’S CHRISTMAS WISH
Published by Kensington Publishing Corporation
Miss Featherton’s Christmas Prince
Ella Quinn

Willows for Weeping by Felicity Pulman
unPHILtered: The Way I See It by Phil Robertson
Preseason Love by Ahyiana Angel
Fool's Gold: A Kisses and Crimes Novel by Natalie E. Wrye
A Parish Darker: A Victorian Suspense Novella by Rhys Ermire
Renegade World: Future Past by Patten, GD
The Inner Circle by Brad Meltzer
Twisted by Imari Jade
Bound By Wolves (Impregnated By The Wolves Part 1) by Bree Bellucci
For Valour by Douglas Reeman