Read Mistakes I Made During the Zombie Apocalypse Online

Mistakes I Made During the Zombie Apocalypse 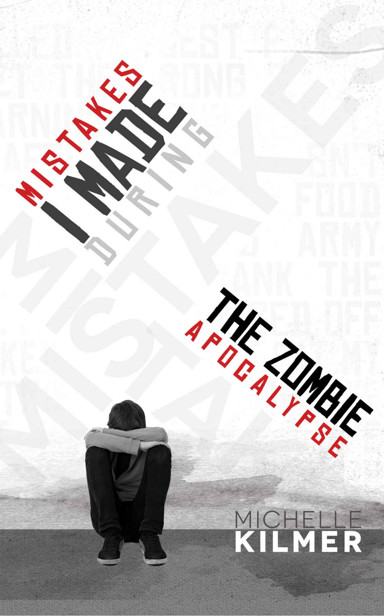 All rights reserved. Any reproduction or distribution of this book, in part or in whole, or transmission in any form, or by any means, electronic, mechanical, photocopying, recording or otherwise, without the written permission of the author is theft. Small parts of less than a chapter in length may be quoted in reviews.

Any similarity to persons living, dead or undead is purely coincidental.

Dedicated to friends who have come and gone.

To those I miss and to those I am happier without.

Our triumphs shape us.

Our mistakes, equally so.

HOW I LEARNED TO KEEP CALM AND LOVE THE APOCALYPSE: AN INTRODUCTION

Soon, you will read this line: “Did I wait too long?” In many ways, that question captures the essence of Michelle Kilmer’s work. Her stories are filled with people who must take action but often wait too long. Even just a split second can mean the difference between surviving another day or becoming one more member of the shuffling and staggering herd of hungry zombies.

When the zombies come—and in Michelle’s world, it is not
if
but
when
—we’ll all have to make choices. To act or wait? To fight or give in?

The best zombie tales make us ask how we would react and while we think we know, we don’t really know. Those of you who just looked to a corner or a closet, reminding yourself that you have a bug-out bag think you know, but do you?

Since none of us can accurately predict how we will react during the early stages of a zombie apocalypse (and if we’re lucky, the late stages), we turn to fiction to help us sort out the possibilities. Then we get to tell ourselves we’d do what a certain hero does and not do what those who succumb too soon did.

Sometimes, the heroes get lucky. Maybe they can answer our first question with a yes, they waited too long. Things could have been different.

I could have saved you.

The hardest questions are the ones with no answers. The questions that breed self-doubt: why did I survive? What could I have done to save my loved ones? Why don’t I just give up? These questions aren’t limited to the zombie apocalypse and that is why we keep writing and reading these stories.

Michelle puts these questions right in your face and doesn’t back down. In her previous novel
When the Dead
, she lets a small group of survivors ask each other these questions. Sometimes, the hits are worse than a bullet to the brain. Why did
you
survive?

Survivor’s guilt can crush your soul, even if you managed to keep your body alive. You are a zombie: a walking corpse with no purpose other than to consume. It is no way to live a life.

And that, unfortunately, is the truth so many zombie stories neglect. Too many offer the hope of a cure or that society will rebuild. Michelle’s brand of hope is much more realistic. She knows we’re all fucked. There is no way back from this level of chaos. The world will be fundamentally different and surviving will be about changing, not trying to make things the way they were before.

Every writer makes mistakes. We sometimes put characters in situations that don’t make sense and have them do things that are not “true” in the context of the character. If we’re lucky, the characters will show us what we did wrong. It takes time and practice to be able to see these mistakes as a writer. The novice throws whatever they think on the page and lets it ride. And then they wonder why no one will publish their stories or buy their books.

This isn’t bad; it just means that writer—much like the protagonist of the book you now hold—needs to slow down and reconsider their actions. You might be thinking that slowing down in the middle of the zombie apocalypse but remember where we started. “Did I wait too long?” also requires us to ask if we moved too soon. We can’t have all action, all the time, as the saying goes. Michelle, even in her need to propel the story, gives us time to contemplate why certain actions were taken just long enough to forget that danger is about to come crashing back in. It is a rare skill to convince a reader that even though nothing will be fine, that there is still a reason to live.

We all make mistakes. That doesn’t mean we are hopeless lost causes. It means we need to keep calm and fight the good fight. Michelle Kilmer is a fighter, a survivor. She fights to bring you the best tales of the apocalypse that she can. Her characters make plenty of mistakes along the way because we all do.

Buying this book wasn’t a mistake on your part, dear reader. If this isn’t your first foray into Michelle Kilmer’s work, you already know that. If
Mistakes I Made During the Zombie Apocalypse
is your first Michelle Kilmer book, by the end you will be asking yourself why you waited so long.

…I GAVE UP ON LIFE

In the middle of a uniquely busy city, on a once quiet street, on the second floor of a mostly abandoned house, in a bedroom’s small closet, Ian Ward is sitting alone. Even if anyone else in the city were still alive, there wouldn’t be room for them in his tiny hiding place.

There are any number of things Ian is hiding from. Keller Kenton, for one; the asshole that burned his real house down and sent Lena to ruin his life. And the zombies, of course. Those who valued their lives (and a small part of Ian still did) would make sure to hide from them. But mostly he is hiding from something downstairs that he doesn’t want to believe is there.

It
is
there. And we’ll get to that.

His life, if it can be called living, has been reduced to scrounging for food from anywhere he can; scraps from long forgotten trashcans and crumbs from dirty kitchen floors have become his sustenance. This too is all dependent on if he has the guts and strength to leave the closet, which most of Ian no longer does.

Outside of the house, in the streets and filling the buildings, hundreds of thousands of the undead have taken over. Because of this, Ian’s thoughts often jump back and forth between finding his next meal and making sure he isn’t someone else’s.

Like a caveman
, he thinks. No time to relax. Only survive.

And what does survival mean anyway?

“It really only means that your heart is still beating,” Ian answers himself. He presses a pillow to his face and, for a second, considers leaving it there until his heart is no longer beating.

But then you’d be a zombie stuck in a closet. That’s even worse.

“It would be a fitting punishment,” he says because he believes he is a waste of air.

He screams into the sweat-stained thing. It helps to muffle the sound. It helps to release some of the anger that keeps bottling up inside of him.

At 17 he is nearly an adult and after what he did a few days ago, any lingering spark of childish thought and deed has most definitely left him. No child, no kind-hearted innocent would do something like
that
.

What is it that he did, you ask?

He won’t let me tell you yet. He isn’t quite ready to talk about it. He has barely accepted it as true. He thinks that
it
will walk into the room any minute now, erasing what happened.

From his solitary post in the closet, Ian is attempting to self-treat so as not to develop any form of psychosis. This is something his psychologist father would strongly advise against, but his father is dead. Even when he was alive he was useless at his job anyway, always pissing off clients with his haughty attitude and causing more harm than good. Ian doesn’t know the symptoms to watch for, the tendencies. He only knows the word psychosis because his dad threw it around like a badge of authority or a weighted stopwatch to get someone to shut up. If any of his father’s books had survived the fire, he could refer to those, but Keller was thorough in his destruction. It truly was the blind leading the blind.

The house that holds his closet hadn’t looked too bad from the outside when he and his best friend Grant came upon it a week ago. It was two stories with a double garage and a well-kept lawn and it had none of the warning signs that said bad things awaited them inside. That was what Ian’s brain remembered, but he had beheld it with starvation in his belly and the dead at his back.

It turned out to be a shithole. Mice or rats have eaten holes through the sheetrock at the base of the walls, dust covers everything. The water probably didn’t run before it stopped running in the rest of the city. If Ian ever goes back outside, he won’t recognize the building from which he came out.

He wants you to know that he is stronger than this. Or that he thought he was. That he was going to
survive
and he sure as hell wasn’t going to “keep a journal.” Not even a few notes on a scrap of paper. Ian never planned to become a lonely teenage boy writing beautiful and disturbing things about his final days. His mom might have told you that he is a “fancy fabricator” and a “king of lies”, and those things were true at a time, but he wants you to know and believe that this is all true. He wouldn’t
want
to make this shit up. And any past lie was probably a result of Grant’s influence; not part of Ian’s natural build. That doesn’t matter anymore. Nothing matters.

But here he is, using an empty calorie counting journal and a pen that Grant stole from Walgreens to keep the journal he said he wouldn’t. Mind you, he won’t be counting calories. There are few overeaters in the apocalypse. And he is using me to tell you all of this because he’s too chickenshit to tell it himself.

Mating Heat by Jenika Snow
The Cold Spot by Tom Piccirilli
Erebos by Ursula Poznanski
On the Edge A Novel by Edward St. Aubyn
Bloodless Knights by Strasburg, Melissa Lynn
Orlando (Blackmail #1) by Crystal Spears
Always a Scoundrel by Suzanne Enoch
The King of Ragtime by Larry Karp
Don't Kiss Me: Stories by Lindsay Hunter
From Russia with Lunch by David Smiedt