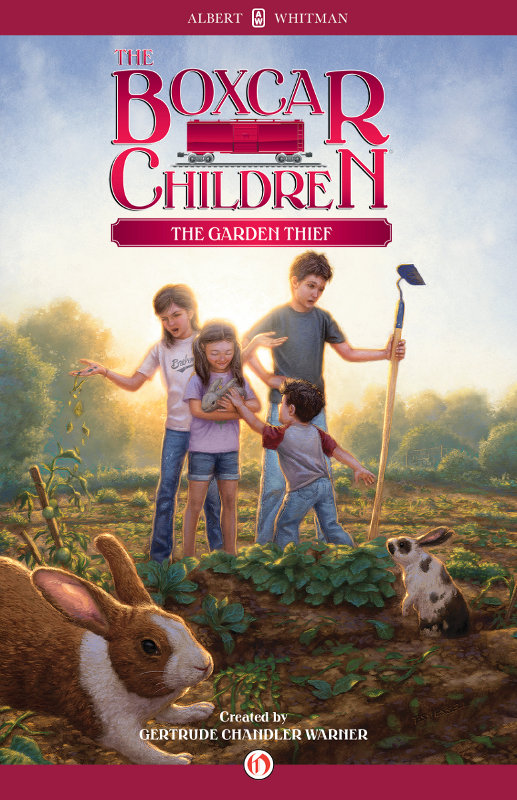 Chapter 1. Mr. Yee Has a Problem

Chapter 2. Cool as a Cucumber

Chapter 5. Bags of Lettuce and Kale

Chapter 9. Thinking It Through

CHAPTER 1
Mr. Yee Has a Problem

“It’s raining,” said Benny as he looked out the window. “And somebody is walking funny.” Benny was six years old, the youngest of the four Alden children.

Violet, his ten-year-old sister, put down her violin and came to the window. “It’s not raining hard,” she said. “This is just a drizzle.” She looked down the long driveway, at the person walking toward their house. “That man is tilting toward the right as he walks.”

Jessie, who had been reading a book, put it down and came to the window. She was twelve years old and sometimes took charge of her younger brother and sister. Jessie looked out the window. “That’s Mr. Albert Yee,” she said. “Grandfather’s friend. And I agree, he is walking funny.”

The Alden children lived with their grandfather, James Alden. After their parents died, the children had run away from home and lived in a boxcar in the woods. They thought that their grandfather, whom they had never met, was a very mean person. They didn’t want to live with him. But their grandfather found them and they saw he was a good person. Now Benny, Violet, Jessie, and Henry lived with him in a big house in Greenfield, Connecticut.

“Why are you all staring out the window?” asked Henry. At fourteen, he was the oldest. Henry loved tools and he loved to fix things. In fact, he had just come up from the basement, where he had a small workshop. “Hey,” he said, “that’s Mr. Yee. And he has a broken arm.”

Benny ran to the door to let Mr. Yee in. He reached it at the same time as Mrs. McGregor did. She was the Aldens’ housekeeper and a great cook.

“What happened to your arm?” Benny asked.

The other children came to the door and said hello to Mr. Yee. Mrs. McGregor asked him if he would like some hot tea. He said yes, and soon everybody found themselves sitting at the table in Mrs. McGregor’s kitchen.

The cast on Mr. Yee’s right arm went all the way from his wrist to the middle of his upper arm. Violet noticed that Mr. Yee couldn’t seem to sit comfortably at the table. And he had to hold his teacup in his left hand.

“How did you break your arm?” Jessie asked him.

The Aldens looked at each other. They felt bad for Mr. Yee.

“Now don’t you worry,” Mrs. McGregor told him. “Your arm will heal and you’ll be fine.”

Mr. Yee looked at her. “How do you know my arm will heal?” he asked.

“Well,” said Mrs. McGregor, “because you’re healthy and you eat healthful foods. Think of all the vegetables you grow and eat. You’re a wonderful gardener,” she said.

Mr. Yee shook his head back and forth. “I cannot tend to my garden this year,” he said. “I thought I could, but I can’t. Not with my arm in a cast. That’s why I’m here. I want to ask James for help.”

Mr. Yee sat up a little straighten “Really?” he asked, looking at each of the children.

“We are quick learners,” said Henry.

“And I love vegetables,” said Benny. In fact, Benny loved food of all kind.

Mr. Yee sipped his tea and seemed to be thinking. Finally he spoke.

“Each year, prizes are given for the best vegetables grown in the community gardens. I have won blue ribbons three years in a row. Once for my tomatoes, once for my cucumbers, and once for my carrots.” He looked at the children. “Maybe, with your help, my garden will produce good vegetables. That is the important thing.” He sipped more tea. “And maybe, just maybe, I will win another blue ribbon this year.”

Henry, who had learned it in school, explained that a community garden was a large plot of land on which many different people had gardens.

Mr. Yee nodded. “That is correct,” he said. “Instead of each of us having a little garden in our backyards, we all go to the same place to grow our gardens.”

“Although what?” asked Jessie.

“This year isn’t like before,” said Mr. Yee. “There have been problems this year.”

“Somebody has been driving an ATV through the gardens, running over plants,” said Mr. Yee. He looked at Benny. “An ATV is an All Terrain Vehicle,” he said.

Benny nodded. “I know that. An ATV can have three wheels or four wheels. Vroooommmmm!”

Mr. Yee smiled at Benny. “No four-wheeled ATV is guilty,” he said. “Whoever is running over plants drives a three-wheeled ATV.”

“That’s mean to ride over plants,” said Henry, “Do you know who’s doing it?”

Mr. Yee shook his head. “And that’s not all. Somebody has been stealing vegetables from the gardens. Last week they took all of my young broccoli plants.”

“A vandal and a thief,” Jessie said.

“Or a vandal who’s also a thief,” said Henry.

“That’s not good,” Jessie said as she looked at her brothers and sister. They nodded their heads.

“We will help you with your garden, Mr. Yee,” said Jessie. “And we’ll also find out who’s been harming the gardens.”

Mr. Yee looked at the children. “Well,” he said, “James always says that the four of you can solve mysteries.”

“Oh, they sure can,” said Mrs. McGregor as she collected the cups and plates.

Violet looked out the window. “The drizzle has stopped,” she said. “Maybe we can go with you to the community garden now,” she said to Mr. Yee.

Mrs. McGregor spoke up. “But how did you get here?” she asked Mr. Yee. “You can’t drive, not with your arm in that big cast. And you can’t ride your bike, either.”

“Well,” said Mrs. McGregor, taking off her apron, “I’ll drive all of you to the gardens, then I’ll come back for you later.”

“Wow!” said Benny as Mrs. McGregor turned into the lane marked Greenfield Community Gardens. “Look at all the plants!”

“The gardens are right across the road from the Kirk Farm,” said Jessie. “My class took a tour of the working farm last year.”

Mr. Yee started to get out of the car. Violet got out of the back seat and opened the front car door to help him.

“I loved riding my bike here each day,” he said. “Now I must walk, until my arm heals.”

After Mrs. McGregor drove off, Mr. Yee told the children he would give them a brief tour of the community gardens before he showed them how to help.

“The gardens are divided into five sections,” he told them. “Sections A through E. Each section has five garden plots.”

Jessie noticed five tall posts, each marking one of the five sections.

“We’ll save Section A for last,” explained Mr. Yee as he walked toward Section E. The Aldens followed him.

“Everything is so neat,” said Henry. “Every section is marked, and every plot is marked.”

Jessie agreed. She looked around. “And there are no fences.”

Mr. Yee scratched the fingers of his right hand, where they emerged from the cast. “There is one fence,” he said. “You’ll see it soon.”

As Mr. Yee led the children around Sections E, D, C, and B, he said hello to people who were working in their gardens. When he stopped to talk to the people, he introduced each of the children. “Thanks to these kind children,” he said, “I can grow vegetables this year.”

When they rounded the corner of Section B, the children stopped. In front of them was a very large, very long section marked A.

“This is huge,” said Henry. “It’s twice as big as any of the other sections.”

“Yes,” said Mr. Yee, “and each plot is much larger than the plots in Sections B through E.”

“Because some people want smaller plots and others want bigger plots.” said Mr. Yee. “Many of the gardeners who win prizes garden in Section A.”

As he talked, Mr. Yee led them forward.

“Look!” shouted Benny. “Rabbits!” He pointed toward one end of Section A, where two white rabbits with brown and black spots hopped into one of the gardens.

Violet noticed that one of the plots—the one right in the middle of Section A—had a chain link fence all around it.

Henry saw two kids standing in front of one of the plots. One was a girl of about twelve, the other was a boy of maybe seventeen.

Mr. Yee saw the boy and girl. “Trouble,” he muttered. “Trouble, trouble.” He turned to Jessie, who was walking next to him. “They are standing in front of my plot, Plot Number Two.”

“Who are they?” asked Jessie. She noticed that the girl was wearing a cast on her left leg and holding a large green trash bag. The strap-on cast was bright orange.

Before Mr. Yee could answer, the girl walked up to them. “I’m Lucasta Kirk,” she said. “I raise prize-winning rabbits. Orange is my favorite color.”

Lucasta frowned at Violet, who was wearing a purple shirt. Violet loved all shades of purple, including lavender and violet.

Violet’s feelings were hurt by Lucasta’s remark. She thought that Lucasta did not have good manners.

Henry introduced himself and his sisters and brother.

The other boy said he was Alex Kirk, Lucasta’s brother.

“Do you have a plot in the community gardens?” Jessie asked Alex and Lucasta.

Jessie looked at the size of each plot. “That’s a lot of land to garden,” she said. 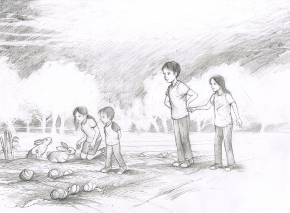 “We know how to do it,” said Alex. “We grew up on a farm. That’s our farm across the street.” He pointed to a large white barn and a white farmhouse surrounded by fields.

“I’m not gardening this year,” Lucasta said. “I’m spending all my time raising my rabbits, so that they win top prize.

Also,” she added, “Mr. Yee ran over me with his bicycle and broke my leg and it’s too hard for me to garden with a broken leg.”

“That is not true!” shouted Mr. Yee. “I did not run over you with my bicycle! Your rabbits ran right in front of me as I was riding, and when I tried to not run over your rabbits, I flew over my handlebars and broke my arm.”

“Your bike hit me and broke my leg!” said Lucasta.

“My bike hit you after I was no longer on it, after I flew over the handlebars and broke my arm because of your rabbits!”

“Please,” said Alex, “let’s not argue about this again. Lucasta is fine, and I hope that you will be, too, Mr. Yee. You’re a very good gardener and I hope you’re able to grow wonderful vegetables again this year. Let’s forget all about the accident.”

“I will never forget,” said Lucasta. “If my rabbits don’t win first prize at the fair this summer, I will hold Mr. Yee responsible.” She turned and limped away.

CHAPTER 2
Cool as a Cucumber