Miz Scarlet and the Bewildered Bridegroom 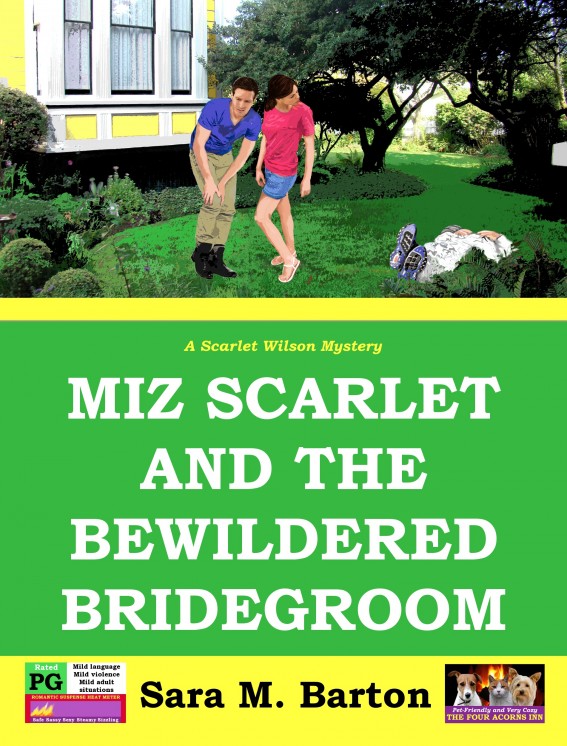 Miz Scarlet and the Bewildered Bridegroom

All rights reserved.
This book or any portion thereof may not be reproduced or used in
any manner whatsoever without the express written permission of the
authorized publisher, Sara M. Barton at Smashwords, except for the
use of brief quotations in a book review.

This eBook is licensed
for your personal enjoyment only. This eBook may not be re-sold or
given away to other people. If you would like to share this book
with another person, please purchase an additional copy for each
recipient. If you are reading this book and did not purchase it, or
it was not purchased for your use only, please return to Smashwords
and purchase your own copy. Thank you for respecting the hard work
of this author.

What Makes This a Cozy
Mystery?

Cozy mysteries are a subgenre of
crime fiction. Sex and violence are not usually important parts of
the story; if they do occur, the reader is not normally privy to
the action. Good-natured humor may be found in some cozies, like
this one, but even when there may be murder most foul, there is not
foul language -- only the mildest of profanity ever graces the
pages of a cozy mystery.

The crimes in cozy mysteries usually take place
within a close-knit community and the detectives are almost always
amateurs, who just happen to have good contacts in law enforcement.
This story does not stray from that format. It is both people- and
pet-friendly.

Thanks go to my
editorial team, who serve me well: “Gull”, Dino, and Penny, story
lovers all. Thanks also to Fiona Wallner at Angloscand
HB.

Laurel Wilson, Scarlet
and Bur’s mother, AKA one of the Googins girls

Cousin Lacey, AKA one of
the Googins girls

“Of course Annalee’s
been kidnapped! What other explanation can there be?” demanded the
frantic bridegroom, hands waving wildly in the air. “You must call
the police! We’ve got to get her back. I’ve got some money saved if
they ask for a ransom, but the bank is closed today. Oh, God! What
am I going to do? My bride is missing!”

I stood there, my heart
sinking. All this hard work, all the efforts we’d made for the past
two weeks to get Annalee Pinault and Gunnar Magnusdotter married on
this first Saturday in June were for naught. There would be no
wedding today without a bride. Where could she be?

“I’ll call my friend,
who’s with the Connecticut State Police. She’ll know what to do.” I
didn’t have the heart to tell him Laurencia Rivera is a state
homicide investigator who works the big cases. If anyone would know
what to do, she would. I just hoped she could help me find the
missing bride in time...and alive.

How did all this
happen? You might well wonder. Maybe if we hadn’t decided that the
Four Acorns Inn would make the perfect wedding venue, we could have
avoided all this trouble. The truth is always easier to see after
the fact, when the damage has been done and everything is out in
the open. But when you’re in the middle of the action, you don’t
always see the danger awaiting you at every turn.

It all started two
weeks earlier, when I got a call from a couple wanting to rent the
inn for their wedding. No sooner had I hung up than my young
assistant began to pepper me with questions.

“Who’s getting
married?” Jenny’s eyes lit on me like I was filet mignon and she
was a starving carnivore who hadn’t eaten in three
weeks.

“No one you know.” I
looked down at the reservation in my hand and read off the names.
“Ms. Annalee Pinault and Mr. Gunnar Magnusdotter.”

“When?” My eager
assistant was brimming with the enthusiasm of Seabiscuit, chomping
at the bit.

“We have two weeks to
pull everything together.”

“Two weeks? How can we
possibly pull off a wedding in two weeks?”

“Relax, Jen. There will
only be twelve for dinner; eight guests on her side, two on his,
plus the bride and groom. I’ve got to get a justice of the peace to
do the ceremony.”

“We’re not going to
fuss?” The teenager sounded disappointed.

“I never said that. Of
course we’re going to fuss. It’s a wedding, for heaven’s
sake.”

“It’ll be great
practice for when you and Kenny tie the knot.”

“What will be great
practice?” said a voice behind us. My mother came down the garden
path in her motorized wheelchair.

“I just took a
reservation for a small wedding party for Saturday, the seventh of
June. The bride and groom want a simple ceremony in the garden and
a sit-down dinner. I was just thinking this would be a nice spot
for it.” I gestured with my hand as I stood in front of our
blueberry bushes, with thick, verdant foliage that was beginning to
come into season. It would be a little early for most of the roses,
but the irises and pansies would still be in bloom. I started
rattling off the details of my game plan and when I finished, my
mother had one question.

“Ah,” I smiled. “I
thought you’d never ask. Annalee and Gunnar are coming in from
Boston; their families will be coming in from Springfield,
Philadelphia, and Oyster Bay. They all want to stay with us. We
have the Black Oak, White Oak, and Red Oak Rooms, the library, and
if Jenny and I give up our rooms for the weekend, the three-room
suite up in the attic. I was wondering if....”

“You want Lacey to give
up her room for you two? I don’t mind her staying with me, but I’ll
want something in return, Scarlet.”

“What might that be?” I
felt a bad case of dread coming on. If Laurel was trying to make a
deal with me, I had little doubt that I would be paying through the
nose. Maybe I’d be better off making a deal with my brother to
sleep at his place.

“You have to promise me
that you will do this wedding up right.”

“I want you to knock
yourself out.”

“No ifs, ands, or buts,
Scarlet. That’s the deal. Take it or leave it.” My mother glanced
down at the ground, waiting for me to make up my mind. “This
wedding must be so memorable that people will talk about it for
years to come.”

“No pressure,” I
laughed, thinking she was pulling my leg.

“Au contraire, my
darling daughter. I expect you to knock the baseball out of the
park on this one.”

“I don’t understand,” I
confessed. “Why do you care whether or not this wedding is amazing?
What’s in it for you?”

“I want the Four Acorns
Inn to become
the
place for weddings.”

“Mom, we’re a bed and
breakfast inn. We only have three rooms, four when we use the
library as guest quarters. How much more can I do?”

“Think about it,
Scarlet, for just a moment. Why can’t we expand the Four Acorns
Inn?”

“We could take over
Wallace’s house,” she continued, “as an annex.”

“Have you been tippling
at the sherry? Gobbling up goofy pills? What in heaven’s name would
possess you to think we can expand the inn? I’m already overworked
and underpaid, dearest mother!” I sat down on the garden bench,
stunned.

“What a great idea, Miz
Scarlet! Think of what we could do with
two
mansions!” Jenny’s words echoed in my ears as I hung my head,
groaning in dismay.

When you, dear reader,
hear the word ‘mansion’, you might imagine we Wilsons are flush
with cash, kicking up our heels while we pop bonbons into our
eager, overfed mouths all day long. As for career choices that
guarantee a life of luxury, innkeeping is not one of them. I
suppose I could write a book about the toilets I’ve scrubbed, the
floors I’ve mopped, and the pillows I’ve plumped, but it’s not
likely to become a
New York
Times
bestseller. I’d be better
off writing about the wild things that have happened here, but who
would believe the tales?

Someone once scoffed
that we could not make any money with just a handful of rooms to
rent out. The Four Acorns Inn, operating as a bed and breakfast
establishment, manages to pay me an almost decent living wage. On
any given day, I usually look after three to six guests. My days
start early and end late. Breakfast is included in our basic fee,
but we often have folks join us for lunch and dinner, too. My
brother, Bur, handles the financial aspects of inn upkeep and
income, filling in as groundskeeper on the weekends. I have one
assistant, who helps out when she’s not taking classes at the
University of Connecticut. In reality, our overhead is low, our
room fees are stable, and our real strength comes from pampering
our guests with personalized attention.

The original Googins
fortune was made two generations ago, with the Four Oaks Pressboard
Company, back in the day when accounting ledgers were kept in neat,
hardcover notebooks. My grandfather, Randolph, and his brother,
Wallace, worked their way up in the business, busily reinventing
the manufacturing process, until they became junior partners.
Eventually, the bottom dropped out of the pressboard market and the
company closed. Now all that’s left of the Googins legacy are the
two family homes, three including Cousin Myrtle’s, and the land
that goes with them.

The thought of
expanding the Four Acorns Inn was enough to give me nightmares for
a month. How long had my mother and her cousin, Lacey, been
concocting this plan to use Wallace’s home? Better known as the
Googins girls, the pair had a knack for springing surprises on me.
It sounded like it was a done deal, another case of Miz Scarlet
being roped in without a clue.

Don’t get me wrong. My
great-uncle’s brown cedar-shingled home is lovely, with its
three-story turret and stained glass windows. If I was flush with
money, I’d probably leap at the chance to turn it into a wedding
venue. But as an experienced innkeeper, I harbor no illusions about
how much is involved in running a business like
that.