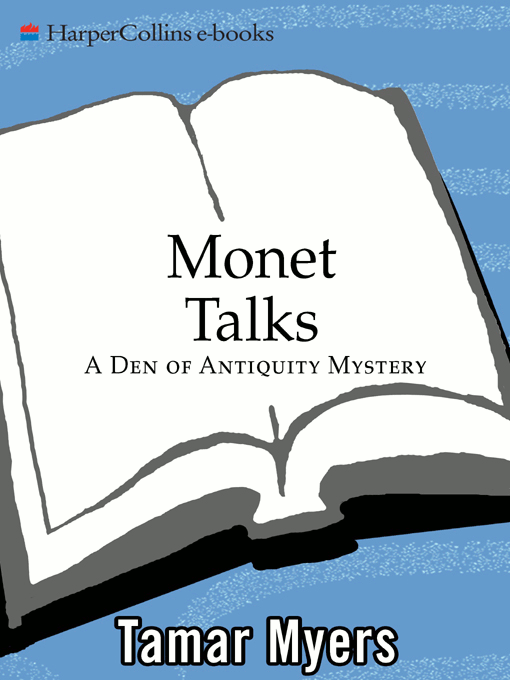 A DEN OF ANTIQUITY MYSTERY

I bought the Taj Mahal for ten thousand dollars atâ¦

Mama patted her pearls. They are a gift from Daddy,â¦

The Charleston police force has officers who number among theâ¦

It was a fine summer evening, appropriate for Charleston's finestâ¦

Martin Gibble fancies himself the most knowledgeable antique dealer inâ¦

Monsieur Dupree's office was a wallboard box, perhaps not unlikeâ¦

“Wynnell! What on earth are you doing in that costume?”

“What was that all about?” Wynnell asked, badly shaken.

I closed my eyes and balled my fists. “Let meâ¦

I took the phone hesitantly. “Who is it?” I asked,â¦

“But don't let her see you,” I whispered.

“That doesn't sound like a man in love, Abby. Thatâ¦

It was hard to focus at Hocus Pocus because theyâ¦

I hit the floor every bit as hard as aâ¦

Mama's crinolines weigh only a few ounces each, but Iâ¦

“Agnes, darling, what a surprise to hear from you.”

Stretch limos are not an uncommon sight in Charleston. Movieâ¦

Could those possibly be Mama's pearls? Mama never took themâ¦

“Bob may be on to something,” Rob said.

Please believe me, I wouldn't have dreamed of destroying anâ¦

The crowd of wedding guests was thinning when I arrived,â¦

I called my brother, Toy, from the emergency waiting roomâ¦

Other Books by Tamar Myers

I
bought the Taj Mahal for ten thousand dollars at an estate auction. A slew of people bid against me, but I kept my cool, and when the auctioneer's gavel pounded, closing the sale, I was the proud owner of India's most identifiable landmark. The crowd applauded.

Afterward, a number of people came over to congratulate me. “Way to go, Abby,” they said, “way to go,” but every single one of them sounded jealous. All in all, it was a very good day, even though I had one heck of a time fitting the Taj into the back of my Volvo station wagon.

It wasn't the real Taj Mahal, of course, but a handmade wire and sheet-metal replica that was actually a birdcage. The bit of information that came with it claimed that this piece had been commissioned by a British officer's wife back in the days of the Raj. The strange black bird that came with the cage was a more recent addition. Other than that the bird's name was
Monet, and what he liked to eat, there was no further information.

My name is Abigail Washburn, by the way. I'm an antiques dealer, the proud owner of the Den of Antiquity, on lower King Street in downtown Charleston, South Carolina. My assistant is C.J.âa.k.a. Jane Coxâwhich stands for Calamity Jane. She has a genius level IQ, is a brilliant businesswoman and a dear friend, but she is one beer short of a six-pack, if you get my drift.

When I arrived at my shop with the Taj Mahal in tow, C.J. was all at twitter. “Ooh, Abby, he's beautiful,” she said referring to the bird. “Where did you get him?”

“He came with the cage. The auctioneer called him a, uhâwell, I've forgotten. Sorry, but I'm not up on my birds.”

“A Greater Indian Hill Mynah. They're a member of the starling family. What are you going to do with him?”

“I haven't really thought about that. I was just so interested in buying this cage. Don't you think this cage is beautiful, C.J.?”

“But look at all that work. Whoever made this had to bend all these wires to create these filigree bars, and just look at all the bezel-set semiprecious stones on these sheet-metal domes.
It must have taken hundreds of man-hours to make, and I'll bet some of these larger stonesâlike that amethyst, for exampleâare worth something by themselves. I hope to double money on this with the right buyer.”

C.J. shrugged. “The amethyst looks cloudy to me. Abby, can I have the bird?”

“This species of mynah is about the best talker in the whole world, Abby. They can sound just like a human, or a cat, or a fire engine, whatever they want to imitate.”

There is nothing like someone else lusting after your property to make it suddenly seem desirable. I gave the bundle of feathers a second glance. He wasn't much to look at; mostly black, with dark orange-brown shadings. There were featherless patches on his neckâwattles I'd guess you'd call themâthat were bright yellow, but I certainly wouldn't call them attractive. A mockingbird might have made a prettier pet, a blue jay surely.

At any rate, neither C.J. nor I heard the man sneaking up behind us, which is why we both jumped when he spoke.

“Whatcha looking at?”
he demanded.

We whirled. There was nobody there.

“You looking to pick a fight, buddy?”

“C.J., this is freaking me out.” The voice re
minded me of my long-dead daddy's, only without his Upstate drawl.

“Maybe it's a ghost, Abby. Have you ever had your shop exorcised?”

“Dennis, Dennis,”
a woman shrieked,
“bring me a fresh pot of tea.”

I'm four feet nine. C.J. is five feet ten. The thing that kept me from leaping into her arms was the look on her face.

“C.J., what is it? Besides the fact that this shop suddenly has more spirits than the state liquor store.”

Much to my horror, the big gal started laughing maniacally. I wouldn't have been surprised to see her horse-size head start spinning Ã  la Linda Blair. Between guffaws she tried to speak, but wasn't getting anywhere.

“If you don't stop laughing this minute, I'm going to have
you
exorcised.”

C.J. sobered pronto. “Abby, it's not one of them that's your culprit. It's him!” She pointed at the mynah.

“I told you they were good talkers, didn't I?”

If I hadn't been staring at the bird, if I hadn't seen its throat bob up and down, I
wouldn't have believed my ears. It sounded exactly like C.J.

“Now do you believe me?”

“Betty bleaches her toe hair?
” The new voice was high and sweet, with a breathy quality.
“Get out of town!”

“Ooh, Abby, you gotta let me have him. Please, pretty please.”

I was about to say I would give her the bird when the bells hanging from my shop door jangled, and in walked two of Charleston's grand dames. I won't mention names, but they both wore wrinkled linen suits and chunky jewelry. Their shoes came to roach-killer points and their handbags came from Moo-Roos. Yes, I know, that description fits half the women living South of Broad, and a good number of Junior Leaguers everywhere. Mama calls them Linen Ladies.

“Will you look at that!”

Linen Lady One walked straight to the Taj Mahal. “What a clever bird.”

Linen Lady Two followed suit. “Dahlin', I believe it was referring to me.”

“You want to hear a dirty joke?”
The bird used a child's voice this time.

“Jimmy fell in the mud!”

The grand dames threw back their heads and laughed uproariously, an eerie sight given the limitations imposed on them by Botox.

“Dahlin',” Linen Lady Two gasped, “have you ever heard anything so precious in your life?”

“Dahlin', have you ever heardâwho wants a second helping of pie? Pie? Pie?”

I watched spellbound as two pillars of Charleston society fell in love with a starling from India. They were all over that bird like white on rice. They said everything they could think of to Monet, who obligingly parroted it right backâpardon the cross-species reference. But what really delighted the doyennes were things Monet had picked up prior to coming into my possession. The fact that some of his blather was on the bawdy side was icing on their cake.

Had I contemplated such a scenario in advance, I would have surmised that a distraction like Monet would be bad for business.
Au contraire.
The ladies dropped a wad of money, and then immediately called all their friends, who, when they popped in to see Monet, were all too happy to push their plastic on me. The only loser was C.J.

“Abby, are you sure I can't have him?” C.J. was still whining a week after Monet's auspicious
debut. “His cage stinks, you know. You don't want a stinky cage in your shop, do you?”

“C.J., his cage stinks because you don't clean it every day like you're supposed to.”

“Shut up, will you please?”

“I meant the bird. Look, C.J., why don't you take off early today and go visit the pet stores. Maybe they have mynahs for sale, or know how to get one for you.”

C.J. actually stomped one of her enormous feet. “It won't be the same,” she whined.

I'd never seen the woman so upset about anything. Not even when her great-uncle Horace Ledbetter vanished into the great blue yonder, after having tied all eighty-nine of his birthday balloons to the arms of his lawn chair.

“I'm sorry, dear, but I'm not willing to give him up. But I tell you what, from now on I'll clean his cage.”

“Clean his cage, clean his cage. Did you call the dentist? Fights powerful odors with just one application.”

My friend and assistant was not amused. She stomped off to dust some highboys, while I fetched an old newspaper from under the counter and got to work on cleaning Monet's elaborate abode.

Engrossed as we were, neither of us really
heard the bells ring for the umpteenth time that day. That's why I nearly jumped out of my pumps when someone poked me in the ribs. Folks who sneak up on one like that deserve lumps in their grits for at least a week.

“Sorry, Abby, but you saw me coming.”

“I most certainly did not.”

“You were looking this way,” one said.

“Maybe I was, but I didn't see you. I was distracted. C.J. won't take no for an answer andâ”

“You're not that much taller than me, Mama.”

“Four inches,” she replied. “But I wasn't referring to height. Like I said, dear, I have a serious problem.”

I led Mama to my storeroom behind the shop, and then, to make sure C.J. couldn't eavesdrop, I turned on a small radio I keep in there for company while I'm checking inventory. “Okay, Mama, spill it.”