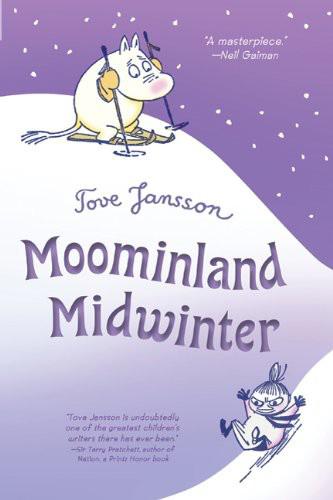 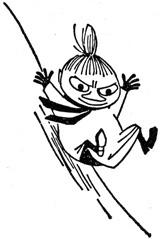 CHAPTER 4
The lonely and the rum

CHAPTER 6
The first of spring 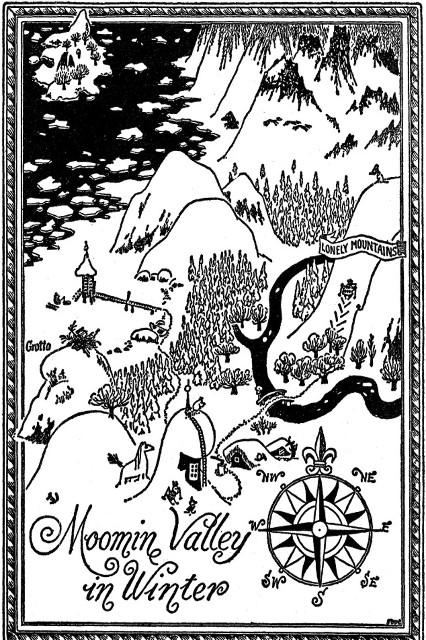 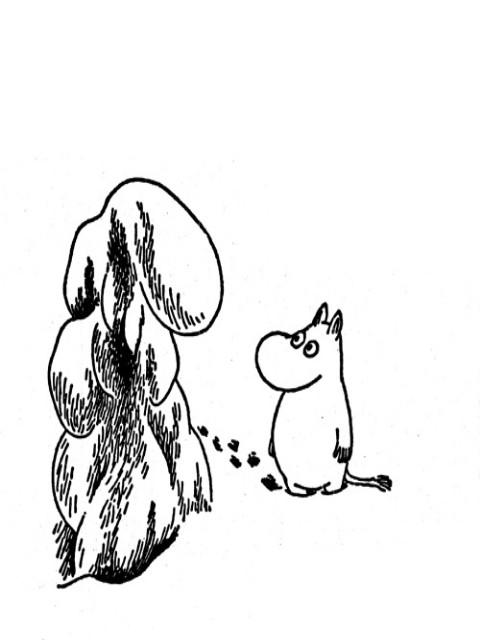 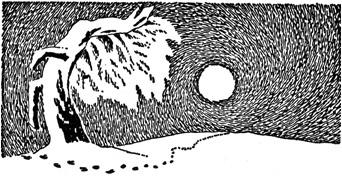 T
HE
sky was almost black, but the snow shone a bright blue in the moonlight.

The sea lay asleep under the ice, and deep down among the roots of the earth all small beasts were sleeping and dreaming of spring. But spring was quite a bit away because the year had only just got a little past New Year.

At the point where the valley began its soft slope towards the mountains, stood a snowed-up house. It looked very lonely and rather like a crazy drift of snow. Quite near it ran a bend of the river, coal-black between ice-edges. The current kept the stream open all winter. But there were no tracks leading over the bridge, and no one had touched the snowdrifts around the house.

Inside, the house was warm and cosy. Heaps of peat were quietly smouldering in the central-heating stove down in the cellar. The moon looked in sometimes at the drawing-room window, lighting on the white winter covers of the chairs and on the cut-glass chandelier in its white gauze bag. And in the drawing-room also, grouped around the biggest porcelain stove of the house, the Moomin family lay sleeping their long winter sleep.

They always slept from November to April, because such was the custom of their forefathers, and Moomins stick to tradition. Everybody had a good meal of pine-needles in their stomachs, just as their ancestors used to have, and beside their beds they had hopefully laid out everything likely to be needed in early spring. Spades, burning-glasses and films, wind-gauges and the like.

The silence was deep and expectant.

Every now and then somebody sighed and curled deeper down under the quilt.

The streak of moonlight wandered from rocking-chair to drawing-room table, crawled over the brass knobs of the bed end and shone straight in Moomintroll's face.

And now something happened that had never happened before, not since the first Moomin took to his hibernating den. Moomintroll awoke and found that he couldn't go back to sleep again.

He looked at the moonlight and the ice-ferns on the window. He listened to the humming of the stove in the cellar and felt more and more awake and astonished. Finally he rose and padded over to Moominmamma's bed.

He pulled at her ear very cautiously, but she didn't awake. She just curled into an uninterested ball.

'If not even Mother wakes up it's no use trying the others,' Moomintroll thought and went along by himself on a round through the unfamiliar and mysterious house. All the clocks had stopped ages ago, and a fine coat of dust covered everything. On the drawing-room table still stood the soup-tureen with pine-needles left over from November. And inside its gauze dress the cut-glass chandelier was softly jingling to itself.

All at once Moomintroll felt frightened and stopped short in the warm darkness beside the streak of moonlight. He was so terribly lonely.

'Mother! Wake up!' Moomintroll shouted. 'All the world's got lost!' He went back and pulled at her quilt.

But Moominmamma didn't wake up. For a moment her dreams of summer became uneasy and troubled, but she wasn't able to open her eyes. Moomintroll curled up on her bed-mat, and the long winter night went on.

At dawn the snowdrift on the roof began to move. It went slithering down a bit, then it resolutely coasted over the roof edge and sat down with a soft thump.

Now all the windows were buried, and only a weak, grey light found its way inside. The drawing-room looked more unreal than ever, as if it were deep under the earth.

Moomintroll pricked his ears and listened long. Then he lit the night-light and padded along to the chest of drawers to read Snufkin's spring letter. It lay, as usual, under the little meerschaum tram, and it was very much like the other spring letters that Snufkin had left behind when he went off to the South each year in October.

It began with the word 'Cheerio' in his big round hand. The letter itself was short: 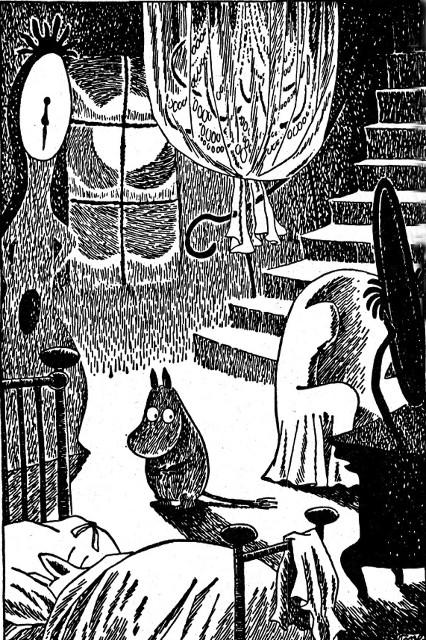 Sleep well and keep your pecker up. First warm spring day you'll have me here again. Don't start the dam building without me.

He went out in the kitchen. It too was miles and miles under the earth as it were and looked dismally tidy and empty. The larder was just as desolate. He found nothing there, except a bottle of loganberry syrup that had fermented, and half a packet of dusty biscuits.