Swinging through the light snow.

In the black, black night.

'I've got enough of your snow and night,' cried the Moomintroll. 'No,
I
won't hear the refrain. I'm cold! I'm lonely! I want the sun back again!'

'But that's exactly why we burn up the great winter bonfire tonight,'aid Too-ticky. 'You'll get your sun back tomorrow.'

'My sun,' repeated Moomintroll in a trembling voice.

Too-ticky nodded and rubbed her nose.

Moomintroll was silent a long while.

Then he cautiously asked: 'Do you think she'd notice if the garden sofa were there or not?'

'Now listen,' replied Too-ticky sternly. 'This bonfire is a thousand years older than your garden sofa. You ought to feel honoured by its being good enough to be laid on top.'

And Moomintroll said no more. 'I'll have to explain that to the family,' he thought. 'And perhaps there'll be new driftwood and a new sofa on the shore after the spring gales.'

The pyre was growing. Dried-up tree-trunks were being lugged up the hillside, as well as rotten stubs, old casks and battens that people seemed to have found on the shore. But the people themselves never came into view. Moomintroll had a feeling that the hill was thronged with them, but he never caught sight of anybody.

Little My came along, trailing her cardboard box in the snow. 'I won't need it now,' she said. 'The silver tray's much better. And my sister seems to like sleeping in the drawing-room carpet. When are we going to light the fire.'

Moomintroll felt greatly excited all evening. He padded from one room to the next and lit more candles than usual. Now and again he stood still, listening to the even breathing of the sleepers and to the light snapping in the walls as the cold sharpened.

He felt certain that all the mysterious people would come out of their holes and dens tonight, all the light-shy and unreal that Too-ticky had talked about. They'd come padding up to the great bonfire that all the small beasts had lighted to make the dark and the cold go away. And now
he
would see them.

Moomintroll lit the oil-lamp and went up to the attic. He opened the hatch. The moon had not yet risen, but 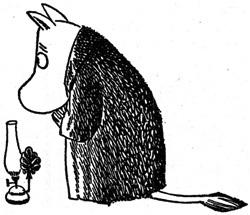 the valley was bleakly lighted by the aurora borealis. Down by the bridge a file of torches was moving along, surrounded by leaping shadows. They were on their way to the seashore and the hilltop.

Moomintroll climbed cautiously down with the lighted lamp in his hand. The garden and the wood were filled with flickering lights and whispers, and all tracks were leading towards the hill.

When he reached the shore the moon was already high over the ice, chalk-blue and terribly remote. Something moved beside Moomintroll, and he looked down into Little My's ferociously gleaming eyes.

'It's going to be quite a fire,' she laughed. 'Make all the moonshine look silly.'

They looked towards the hilltop at the same time and saw a yellow flame rising against the sky. Too-ticky had lit the bonfire.

It wrapped itself in flames at once, from ground to top, it gave a roar like a lion and threw its reflection straight down on the black ice. A lonely little tune came running past Moomintroll: it was the invisible shrew who was a little late for the winter ritual.

Small and great shadows were solemnly skipping round the fire on the hilltop. Tails were beginning to thud on drums.

'Good-bye to your garden sofa,' said Little My.

'I've never needed it,' Moomintroll replied, impatiently. He stumbled up the icy slope. It was glittering in the firelight. The snow was melting from the heat, and the warm water wet his paws.

'The sun's coming back again,' Moomintroll thought in great excitement. 'No darkness, no loneliness any more. Once again I'll sit in the sun on the verandah and feel my back warming...'

Now he was up on the top. The air was hot around the fire. The invisible shrew was blowing another and wilder tune.

But the dancing shadows were already gliding away, and the drums were thudding on the other side of the fire.

'Why did they go away?' asked Moomintroll.

Too-ticky looked at him with her calm, blue eyes. Still, he wasn't quite sure that she really did see him. She was looking into her own private winter world that had followed its own strange rules year after year, while he had lain sleeping in the warm Moominhouse.

'Where's he that lives in the bathing-house cupboard?' Moomintroll asked.

'What did you say?' said Too-ticky, absentmindedly.

'I'd like to meet him that lives in the bathing-house cupboard!' repeated Moomintroll.

'Oh, but he's not allowed to come out,' said Too-ticky. 'You can't tell what such a one would find in his head to do.'

A herd of small creatures with spindly legs came blowing like a wisp of smoke over the ice. Someone with silvered horns walked stamping past Moomintroll and over the fire flapped something black with large wings, and disappeared northwards. But everything happened a little too quickly, and Moomintroll never found time to introduce himself.

'Please, Too-ticky,' he asked, pulling at her sweater.

She said kindly: 'Well, there's the Dweller Under the Sink.' 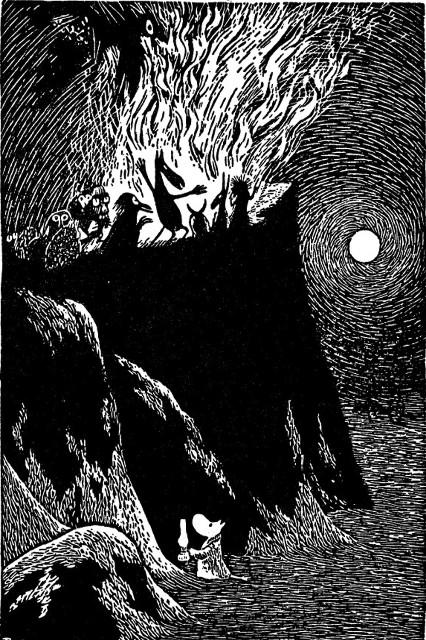 He was a rather small one, with bushy eyebrows. He sat by himself, looking into the fire.

Moomintroll sat down beside him and said: 'I hope those biscuits weren't too old?'

The little beast looked at him but didn't reply.

'May I compliment you on your exceptionally bushy eyebrows?' Moomintroll continued politely.

To this the beast with the eyebrows replied: 'Shadaff oomoo.'

'He has a language all his own, and now he believes that you've hurt him,' Too-ticky explained.

'But that wasn't my intention at all,' said Moomintroll anxiously. 'Radamsah, radamsah,' he added imploringly.

This seemed to make the beast with the eyebrows really overcome by rage. He rose in great haste and disappeared.

'Dear me, what shall I do?' said Moomintroll. 'Now he'll live under our sink for a whole year more without knowing that I just wanted to be friends with him.' 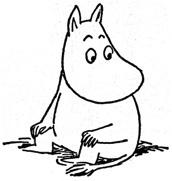 The garden sofa crumbled to pieces in a shower of sparks.

Nearly all the flames had died down by now, but great embers were still smouldering, and the water was bubbling in the crevices. But the shrew suddenly stopped playing, and everybody looked out towards the ice.

The Groke was sitting there. Her round little eyes reflected the glow, but otherwise she was just a large shapeless greyness. She had grown a lot since August.

The drums ceased while the Groke came shuffling up the hillside. She went straight to the fire. And without saying a word she sat down on it.

There was a sharp hissing sound, and the hilltop was wrapped in mist. When it passed away again, no embers were to be seen. Only a big grey Groke blowing snow-fog about her.

Moomintroll had fled down to the shore with many others. He found Too-ticky there also and shouted:

'What happens now? Has the Groke made the sun stay away?'

'Take it easy,' replied Too-ticky. 'She didn't come to extinguish the fire, you see, she came to warm herself, poor creature. But everything that's warm goes cold when she sits down on it. Now she's disappointed once more.'

Moomintroll saw the Groke rise again and sniff at the frosted charcoal. She then went over to his oil-lamp that was still alight in the snow. He saw it go out.

The Groke remained immobile for a moment. The hill was empty, everybody had left. Then she glided down to the ice again and back into the dark, as she had come, alone. 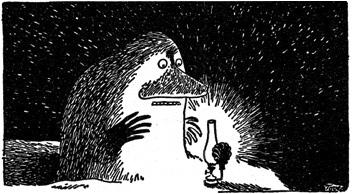