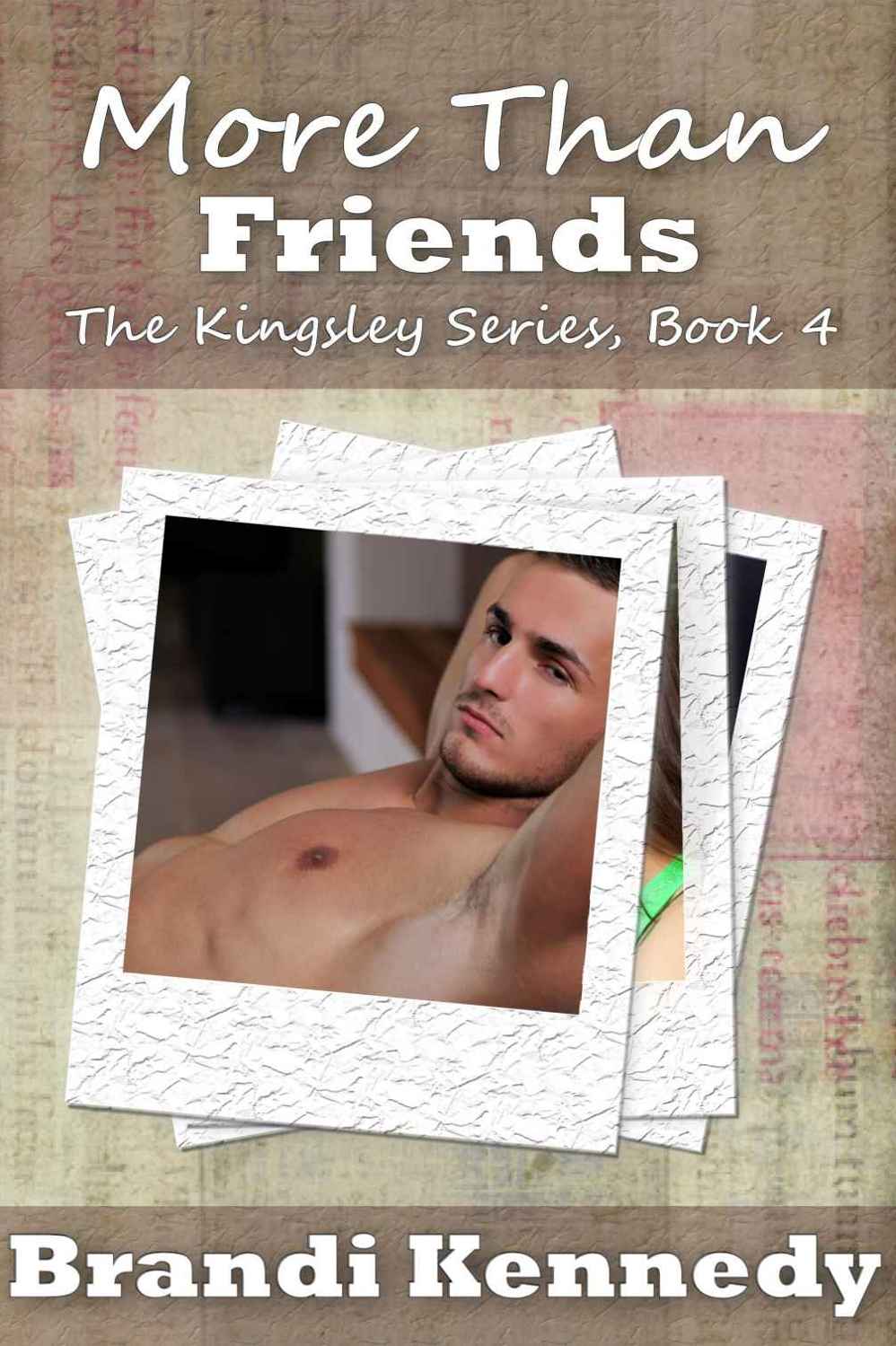 Book Four of the Kingsley Series

It never ceases to amaze me, the support that I have found and the new friends that I have made, the entirely new aspect of life that has opened up to me, just because I took the risk of following my dreams.

This book is written for my children who challenge me, who fill me with joy, and who continually give me hope for the existence of romance – if only for their sakes …

For Dana, my twin spirit, my cousin, my friend, and so much more – Thanks for giving me courage and strength just when I need it …

For men, past and present, “good” and “bad,” who have let me crawl inside their heads and examine their spirits – you all gave me a little bit of what made Michael Kingsley who he is …

And for my readers.

You mean everything to me. Without you, I’d still be a girl with a dream and no hope of ever seeing it come to fruition.

A Letter From The Author

Other Titles By Brandi Kennedy

“
Ow! Damn it
!
” Michael Kingsley jerked his hand back from the rough edge of a broken bolt and shook droplets of blood away from a swollen knuckle. Grimacing at the sting of rough fabric against torn skin, he swiped the blood against his denim-clad thigh, shook his head, and bent back to his work. The radiator would
n’
t replace itself, and bloody hands or no, he was
n’
t ready to quit yet.

The garage bay rattled softly to the tune of Foreigne
r’s“
Hot Bloode
d”
, and Michael was exhausted. Staying at the shop all night working had seemed like a great idea earlie
r
– when h
e’
d closed up, sent his office manager home, and realized that he just could
n’
t go home to an empty house again. Instead, h
e’
d gone out to pick up a bottle of his favorite rum, then he had headed back to the garage, sipping slowly from the bottle as he worked his way through a parking lot full of backed up jobs. The trouble with only trusting himself to do the work correctly was that it waited for him to get it done, and there was no one to take up the slack.

Two flushed radiators and a power steering pump later, the bottle was nearly half gone, and so was Michael. When he tripped over the air in front of his shoe and had to catch himself against the hood of the car h
e’
d just finished working on, he decided it was time to stop working before he did something stupid to someone els
e’
s car. Michael was a generally responsible person; he might have a drink after hours, but there was no way he was willing to risk someone els
e’
s safety. Still, going
home
was
n’
t an optio
n
– his house had
n’
t been home since his wife had unexpectedly moved out and divorced him several years ago, and lately, h
e’
d been thinking of selling the place. No sense keeping that big house, just to grow old in it alone.

Chaos blared from the intercom speakers; during the daytime hours, his office manager used the system to tell him that a customer was waiting, but right now the speakers were Michae
l’
s only source of company and classic rock was his best friend. Aerosmit
h’
s Steven Tyler commanded Michael t
o
“
walk this way"
; the corner of his mouth lifted slightly in response. Michael nodded, muttering
,“
Thanks, do
n’
t mind if I do
.
” He snagged the rum by the neck of the bottle, left the keys to the finished vehicle on the drive
r’
s seat, and made his way over to the third bay at the end of the shop. Nothing soothed his soul like working on the restoration job that had inspired him to open his own garage in the first place, and right then, his soul needed soothing.

“
There you are
,
” he whispered, shaking his head as a fresh hot trail of rum burned its way to his stomach
.“
The only thing I have that hasn't left me yet
.
” Rapping his knuckles gently against the dusty body of the partially restored 1969 Chevy Camaro, Michael lifted the rum to his lips again. He swallowed, sighed as the liquor settled in his stomach, and left the bottle resting on the edge of the front bumper.

Though it had once been a symbol of Michae
l’
s dreams for his future, the old car had done nothing more than gather dust in the third bay of the garage for over a year after he'd bought it, waiting patiently, untouched as he had focused on building his business and turning a profit. Once the shop had become profitable, Michael had turned those profits into a decent starter home while working his way through restoring the body of the Camar
o
– but after he and Nicolette had gotten married, the project had been forgotten, the car neglected in favor of his marriage. For a long time after it was over, the shock of the unexpected divorce had broken him; the first several months after Nicolette had left him, Michael had barely been motivated to come to work and keep his business afloat, let alone taking on anything extra. Even now, there were days when he felt like he was just going through the motions, living his life without really feeling it. But at least he was living again.

And he
was
making progress; the shop was turning a profit again and Michael was really trying hard to get his life back in order, trying hard to get back to the man he had once been. Sure, he spent more time drinking now than he cared to admit, but if drowning his sorrows with a little drink was how he found escape from his loneliness, that seemed a small price to pay, and his progress on the Camaro felt like proof that he was finally on the mend. At least he had
something
going right and according to plan again. The hood of the Camaro had
n’
t been closed in month
s
– not since Michael had simply given up on going home after work each nigh
t
– and in those months, the car had made remarkable progress. It was running more smoothly than ever before, the finally fully rebuilt engine was as shiny as it would have been i
n’
69, and all that was left was to finish restoring the inside.

By now, Michael figured he had spent nearly six years restoring various parts of that car, and although it was the only real constant in his life, he
was
proud of the accomplishment. He had hunted for original parts as much as possible, and along the way, he had made contact with several dealers of old and antique cars. He had made lots of good friends, and he had learned more than h
e’
d ever thought he wanted to know, about more topics than he could have imagined.

Michael turned to look at the boxes stacked in the corner of the bay, smiling softly at the sense of purpose that filled him. The boxes held the most recent shipment of restoration supplie
s
– soft and supple red leather for the seats and interior, with white leather stitching and trim. Everything was custom made, and all that was left to do was install the interior fabrics, stand back, look down on a job well done, and
finally
take it for a drive. Even if he
would
be riding alone. As usual.

“
Nice to know I can still do
something
right, though
,
” he muttered, nodding slightly
.“
Even if cars
are
my people. Might be less weird though, if
people
were my people. Less lonely that way
.
” Sighing, he shook his head and reached for the driver's side door handle
.“
And maybe then I would
n’
t be talking to myself like a damned idiot
.
”

An hour later, the driver's seat of the car was on the floor of the bay, naked and pathetic without its old ragged coverings. Old seat foam had been ripped away and replaced, and Michael was nearly ready to finish for the night. Bare-cheste
d
– he'd long since discarded his sweat soaked t-shir
t
– Michael backed away from his third attempt to finish pulling the seat cover down, shaking his head in frustration. The new seat covers were pre-stretched, but they were still tight enough to put up a fight; the cover was only about halfway down the back of the seat, and Michael had just torn a second fingernail painfully beyond the quick.

"Alright, you damned hunk of junk," he growled, glaring at the seat. "I've had just about enough of
this
shit. This is
bullshit
!" Still grumbling under his breath, Michael used his uninjured hand to snatch up the nearly empty rum bottle resting on the bumper of the Camaro and drained the rest of the liquor, hissing softly as the drink burned a trail to his belly. Michael spent a moment standing there, the bottle dangling from one hand, injured fingers flexing restlessly on the other. Finally, he shook his head and resigned himself to finish the nigh
t
– and as he settled the empty bottle beside the naked seat of the Camaro, he couldn't help sinking back into the music still blaring from the garage speakers.

"No pill gonna cure my ill, I got a ... bad case ... of lovin' you," he sang softly, gingerly working his fingertips beneath the snug new seat leather.

By the time the seat upholstery was fitted and the driver's seat was ready to reinstall, Michael was wishing for another bottle, but he ignored the urge and pulled the passenger seat from the car. By the time both seats were finished and reinstalled, the blessed numbness of the liquor buzz was gone, although his constant craving was not. Michael's favorite classic rock radio station had changed moods, and Michael's mood had changed to
o
– from just thoughtful to downright melancholy. Loneliness and broken memories kept him from going home, but staying at wor
k
– and drinking way too much ru
m
– didn't change his problems. He was still almost thirty-four years old, with thirty-five and then forty just around the corner. He was still divorced, and still too miserable to do anything about it. He was still willfully ignoring the nagging feeling that he was fast approaching outright alcoholism. He was still depressed as hell.

And he was still going to have to paint on a happy face and sober u
p
– because just that afternoon, his baby siste
r’
s fian
c
é had asked him to be the best man at their wedding, and he had about six weeks to find enough hope to offer a wedding toast. The problem was, Michael had
n’
t felt hope in quite a while.

Rev by Chloe Plume
The Dollhouse Asylum by Mary Gray
Unfaithful: An Unlocked Novella by Suzuki Sinclair
Nightingale by Susan May Warren
Phantom: An Alex Hawke Novel by Ted Bell
The Prince of Neither Here Nor There by Sean Cullen
Seduced by Danger by Stephanie Julian
Burning Down the House (Skull Crackers Motorcycle Club) by Knight, Marissa
It Will Always Be You (You Series Book 1) by Tina Ness
The Bwy Hir Complete Trilogy by Thomas, Lowri