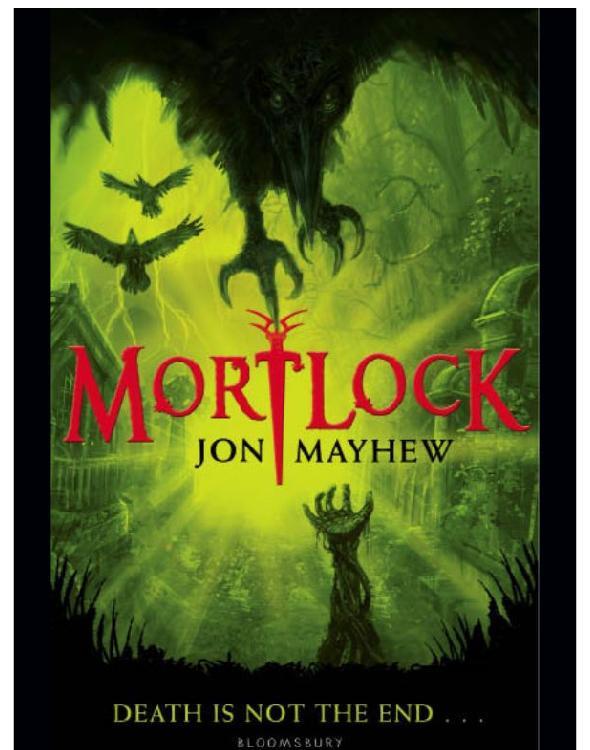 The moral rights of the author has been asserted

This electronic edition published in April 2010 by Bloomsbury Publishing Plc

You may not copy, distribute, transmit, reproduce or otherwise

make available this publication (or any part of it) in any form, or by any means

printing, recording or otherwise), without the prior written permission of the

publisher. Any person who does any unauthorised act in relation to this publication

may be liable to criminal prosecution and civil claims for damages.

Visit www.bloomsbury.com to find out more about our authors and their books.

You will find extracts, authors’ interviews, author events and you can sign up for

newsletters to be the first to hear about our latest releases and special offers.

For my wife, Lin, and my children,

Sally, Alfie, Frank and even Jack

Immortal amarant, a flow’r which once

In Paradise, fast by the Tree of Life

Began to bloom, but soon for man’s offence

To Heav’n removed where first it grew, there grows,

And flow’rs aloft shading the Fount of Life

Sebastian Mortlock felt a wriggling invasion between his toes. He glanced down. The ground seethed beneath his torn boots as worms, millipedes, cockroaches and ants twisted over each other. An insect crawled up the arch of his foot. He stamped and grimaced at his two comrades.

Thurlough Corvis grinned and mopped his brow. ‘It’s a good sign,’ he reassured Sebastian. ‘This jungle’s teeming with life. Even three Englishmen might survive.’

‘It’s a sign. I’m not sure how good it is,’ said Edwin Chrimes, pulling a face and swatting a beetle from his leg. ‘There shouldn’t even be a jungle here, not in this godforsaken place.’

The jungle, an inexplicable oasis, had brought them to this barren salt desert in the first place. It had pulled them clear of the raised weapons of hostile tribesmen, tugging them past the narrow-eyed gaze of suspicious warlords; dangerous men, who had spent their lives fighting over this hellhole.

The Englishmen were still alive – if oddly dressed. The three of them had long ago abandoned their dark travelling suits for the lighter, cooler local tribal wear. Travelling had stained the white cotton tunics that flowed down to their boots. Turbans enveloped their heads and scarves masked their faces, showing only their eyes.

During their travels, they had become good friends. Corvis had surprised Mortlock. A slight, pale gentleman, more used to the gaming table and the port, he’d found strength in the face of their many hardships – unlike Chrimes. With his red hair and freckles, he had suffered from the scorching sun, his skin blistering in the heat. He never stopped complaining.

‘So what now, Sebastian?’ Corvis raised an eyebrow, the slanting shadows of the forest canopy exaggerating his dark, pointed features. ‘Do we rest or shall we forge ahead?’

‘Rest?’ Mortlock stretched his powerfully built body, aware of how he towered over his friends. ‘We’re on the verge of the greatest discovery of all time and you want to rest?’

‘You’re in charge. I just wondered if you were tired,’ Corvis said, raising his hands. ‘After all, an old man like you . . .’

‘I’m twenty-six, Corvis,’ Mortlock objected, though he couldn’t disguise the humour in his voice. ‘Only a year older than both of you!’

‘Well, it takes its toll,’ Chrimes chipped in.

Mortlock gave them both a withering glance, then turned and plunged into the bush.

‘If you’re so young and fit, you’ll have no trouble keeping up!’ he called back, throwing down his pack and disappearing into the shadows. He heard Corvis and Chrimes give a yell and then the rustle of foliage as they charged after him.

Mortlock grinned, glancing back only once to gauge the distance between himself and his pursuers. He leapt over fallen tree trunks and dodged around spiny bushes. But the jungle was dense. Vines pulled and snagged at his cotton robes. His laughter died as he panted with the effort of running. Sweat poured down his face. He wrestled through the tangle of vegetation that clung to him, fought against him. It grew darker. He could hear the others still cursing and thrashing about behind him, their voices fainter now. A red glow flickered ahead, enticing him,
like a moth to flame
, he thought. More branches and creepers gripped him as he struggled forward. He fell heavily on to a rotten tree stump and pain lanced up his leg. Mortlock’s breath grew more ragged as panic swelled inside him. He felt as if he were drowning in a sea of green. With a bellow of rage he dug his feet into the soft earth and hurled himself forward. The wall of foliage gave way, tearing at his clothing as he fell on to the open ground of a clearing.

Trees huddled around the small glade, leaning in as if to protect the small flower that grew in the centre of the clearing. It stood about a foot tall, scarlet petals cupping upwards, like a tulip made from the most exquisite jewels. A pulsing light – reminding Sebastian of the beat of a heart – caused the shades of red to flicker and flow across the surface of the flower’s petals.

Now Mortlock could hear Corvis grumbling and snarling as he tore his way through the last few feet of dense jungle. Without looking round, Mortlock heard his friend fall into the clearing, then a second crash as Chrimes followed. The two men appeared beside Mortlock and gazed towards where he was looking. No one spoke.

Birds cried out high above their heads. Distant roars and growls from the undergrowth barely registered in Mortlock’s mind. He couldn’t take his eyes away from the glowing red flower. He found himself sinking to the ground and was dimly aware of Chrimes and Corvis doing the same. Damp moss cushioned his knees and a humid mist seemed to seep into his bones.

‘The Amarant,’ Mortlock whispered, glancing at his companions. ‘We’ve found it at last, eh?’

‘It’s beautiful,’ Chrimes murmured, the crimson luminescence making his red hair look aflame. ‘So much power in something so fragile.’

Time seemed to slow as Mortlock stared into the red heart of the flower. It pulsed before him, and he felt like he was bathing in its unearthly light as it painted images in his mind.

A twig snapped deep in the forest.

Mortlock stiffened and glanced around. The shadows beyond the flower’s pulse shifted as if by a slow, steady movement.

‘There’s something out there,’ Corvis said, his dark eyes burning in the ruby glow. He shivered.

‘Like someone’s watching us,’ Chrimes agreed, staring into the blackness. ‘How long have we been here?’

‘I don’t know,’ Mortlock muttered, running his fingers through his matted blond hair. He felt as though he’d just woken up from a deep sleep, drugged and thick-headed. ‘Too long. Look at the moon.’

‘My God,’ Corvis whispered. The bloated moon hung high above their heads. It had been a blazing hot afternoon when they’d run into the oasis.

The undergrowth rustled around them. Vague shapes flitted through the shadows. Whispering voices carried on the breeze like the rustling of dead leaves. The sweet, cloying scent of decay filled the air. An emaciated face grinned out of the undergrowth. Behind it were others.

‘What in God’s name are they?’ Chrimes whispered, sweat beading his forehead.

‘I don’t think God has much to do with it,’ Mortlock replied, his voice shaky and hushed. ‘I think they guard the Amarant.’ He heard one of his friends give a low moan of fear.

Corvis broke first, his slim frame almost knocking Chrimes over as he bounded into the bushes. The whispering became a low, angry murmur. Mortlock grabbed Chrimes and dragged him bodily from the clearing.

Thorns and briars snagged and tore at them, ripping flesh and clothes as they fought their way through the vegetation. Mortlock could hear Corvis panting up ahead. He pushed the wide-eyed Chrimes before him, heaving the blade of his machete at branches and creepers. Mortlock snatched a glance into the undergrowth and glimpsed long-dead faces leering out from the shadows. He heard himself scream as the murmur of the dead became a strangled yell of anger. Cold fingers raked his shoulders and snagged at his hair; the sweet stench of decay clogged his nostrils. He slashed at the limbs that tried to snare him, shuddering as his fingers brushed against the dry, icy skin of corpses. His breath shortened as he fell forward.
We’re all going to die!
he thought desperately. But suddenly the jungle thinned and Chrimes and Mortlock staggered out into the cold night air of the desert, collapsing on to the shivering Corvis.

Dawn light broke over them, even though night had descended only moments ago. The men stared back into the forest, shivering. Steam rose off the fat leaves of jungle plants.

‘I had a vision while I sat by it,’ Corvis said quietly, looking back into the dark, silent jungle. ‘A cold horror clutched my heart. I saw . . . wings, black wings, stabbing beaks, ravens and crows . . .’

‘Decay,’ Mortlock whispered. ‘I saw a death’s-head, skulls and charnel houses . . . We can’t take the Amarant with us. Those were warnings.’ Sweat trickled down his forehead. ‘We must leave and never come back.’

‘But we’ve come this far,’ Corvis protested, glancing from Chrimes to Mortlock and back. ‘Maybe there’s a way. If we bring back the Amarant, we’ll be famous, rich beyond our wildest dreams.’

‘Will we?’ Mortlock grunted as he stood up. ‘I say we’ve been given a chance. Let the thing alone.’

‘You’re right,’ Chrimes said, smoothing his thin red beard with trembling fingers. ‘We can’t take the Amarant. It would destroy us.’

‘We must swear that none of us will return to this spot,’ Mortlock said. He held out an open palm. He slid his sheath knife from his belt and placed the blade to his hand. He tilted the knife and dragged it across his flesh, scoring a mark on his work-worn skin. Then he offered the handle of the knife to Chrimes. ‘A blood pact,’ he said simply.

‘Agreed.’ Chrimes slashed at his palm and held his hand against Mortlock’s.

They turned to Corvis. He winced as he made a feeble scratch, only just managing to draw blood. He joined his friends.

‘An oath,’ he murmured faintly. He failed to meet Mortlock’s glance. ‘Never to take the Amarant from this place.’

The Yellow Yacht by Ron Roy
Falling (Bits and Pieces, Book 1) by Miranda, Shirley
Sweet Home Alaska by Rebecca Thomas
Our first meeting by Griffing, Janet
Johnny Gruesome by Gregory Lamberson
Misfortune by Nancy Geary
The Archer's Return: Medieval story in feudal times about knights, Templars, crusaders, Marines, and naval warfare during the Middle Ages in England in the reign of King Richard the lionhearted by Martin Archer
I Can't Think Straight by Shamim Sarif
Chasing The Dead (An Alex Stone Thriller) by Goldman, Joel
Clifford's Blues by John A. Williams