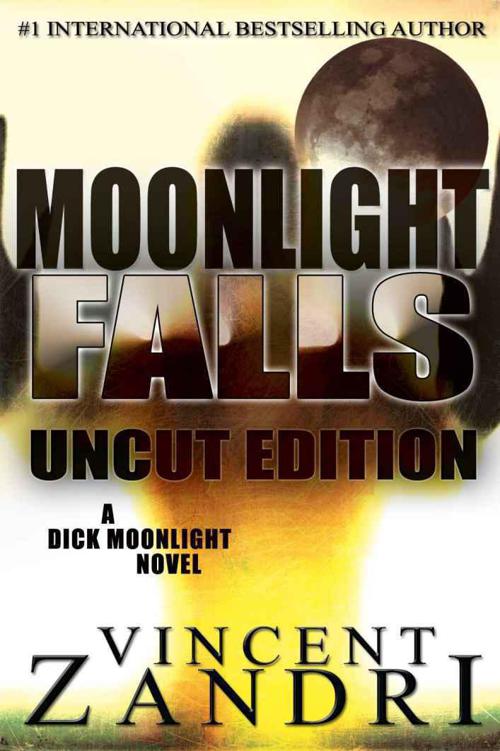 In MOONLIGHT FALLS, novelist and photo journalist Vincent Zandri asks the question "If you knew your life could end at any moment, how far would you go to prove you murdered your lover? " Albany, New York, is the setting of Zandri's paranoid thriller (in the Hitchcock tradition) about Richard "Dick" Moonlight, former APD detective turned private investigator/massage therapist, who believes he killed Scarlet Montana - his illicit lover and wife of his ex-boss, Chief of Detectives Jake Montana. The problem is ... Moonlight doesn't remember what happened!

Vincent Zandri has an M.F.A in Writing – Vermont College of Norwich University, 1997, and a B.A. in Sociology, Providence College, 1986. Moonlight Falls is his fourth thriller/suspense novel and he is working on the fifth. A world-traveler, Zandri is also a photo journalist.

“If you want a novel that runs wild like a caged beast let loose, Zandri is the man.”

“Probably the most arresting first crime novel to break into print this season.”

“A thriller that has depth and substance, wickedness and compassion.”

“Vincent Zandri explodes onto the scene with the debut thriller of the year. As Catch Can is gritty, fast-paced, lyrical and haunting. Don’t miss it.”

“Compelling…As Catch Can pulls you in with rat-a-tat prose, kinetic pacing…characters are authentic, and the punchy dialogue rings true. Zandri’s staccato prose moves As Catch Can at a steady, suspenseful pace.”

“Exciting…An Engrossing Thriller…the descriptions of life behind bars will stand your hair on end.”

“Readers will be held captive by prose that pounds as steadily as an elevated pulse… Vincent Zandri nails readers’ attention.”

“A smoking gun of a debut novel. The rough and tumble pages turn quicker than men turn on each other.”

“The story line is non-stop action and the flashback to Attica is eerily brilliant. If this debut is any indication of his work, readers will demand a lifetime sentence of novels by Vincent Zandri.”

—I Love a Mystery

“A tough-minded, involving novel…Zandri writes strong prose that rarely strains for effect, and some of his scenes…achieve a powerful hallucinatory horror.”

“[Zandri] demonstrates an uncanny knack for exposition, introducing new characters and narrative possibilities with the confidence of an old pro…Zandri does a superb job creating interlocking puzzle pieces.”

“This is a tough, stylish, heartbreaking car accident of a book: You don’t want to look but you can’t look away. Zandri’s a terrific writer and he tells a terrific story.”

—Don Winslow, author of The Death and Life of Bobby Z

Other books by Vincent Zandri

“Maybe being a good man didn’t amount to anything … It didn’t seem to get you much. You ended up in the same place as the bad man. Sometimes with a cheaper coffin.”

“He reached out and took the knife to slaughter.”

What you are about to read is not MOONLIGHT FALLS as originally and graciously published by R.J.Buckley in 2009. It is an “uncut” version that features upwards of 100 pages of original material that is derived from multiple points of view. This material was edited by me in later drafts in order create a more streamline manuscript that was delivered from Richard “Dick” Moonlight’s 1st person POV only.

In this version, you not only have Moonlight’s perspective, you also enter into the head of several major characters, including Scarlet Montana, her husband Jake Montana, Moonlight’s ex-wife Lynn, and even the Russian mobsters who are busy harvesting human organs illegally. Any chapters that appear for you in italics, are the “uncut” chapters and published in their entirety. Even the original quotation by the late Robert B. Parker which appears prior to the Prologue and which was eventually substituted for a quote from Genesis, is included in this new novel.

In some ways, this novel is a richer portrayal of the tragic events that lead Dick Moonlight to believe he might actually be responsible for the death of his lover while, as a private detective under the employ of the Albany Police Department’s understaffed violent crimes/homicide division, he goes about trying to solve the riddle of who killed her. You see now the near impossible dilemma Moonlight faces. Simple irony doesn’t fit the bill here. Neither does paradox. Only the words “dark tragedy” seems to come close to describing the frantic and often desperate circumstances in which Dick Moonlight finds himself. The more he searches for a killer or killers, the more the evidence points to himself. Now you see why this novel was described as “A new book for Hitchcock fans,” by MORE MAGAZINE.

These extra chapters will add a new dimension to the first Moonlight novel. And when combined with the special author interviews, reviews, and essays also included in this especially thick volume by StoneGate Ink, will serve to create a brand new, multi-layered, and indeed, riveting reading experience.

As always, thanks for reading.

MAN’S LIFE IS FLASHING before his eyes.

He’s a little amazed because it’s happening just like it does in a sappy movie. You know, when they run real fast through some homespun Super 8 film starting with your birth, moving on to toddler’s first step, then first day at kindergarten, first communion, first day at high school, first prom, first Gulf War, first marriage, first born son, first affair, first divorce …

So why’s the life flashing by?

Man’s about to execute himself.

He sits alone at the kitchen table inside what used to be his childhood home, pistol barrel pressed up tight against his head, only a half inch or so behind the right earlobe. Thumb on the hammer, index finger wrapped around the trigger, hand trembling, eyes closed, big tears falling.

On the bright side of things, it’s a beautiful sunny day.

Outside the kitchen window, cheerful white wispy clouds float by in a wide blue sky. Bluebirds chirp happily from the junipers that line the perimeter of his upstate New York property. The cool wind blows, shaking the leaves on the trees. The Fall air is cool, crisp and clean. Football weather, his mortician dad used to call it back when he was a happy-go-lucky kid.

On the not-so-bright side, a bullet is about to enter his brainpan.

But then, as much as the man wants to call it quits, he is not entirely reckless; not entirely insensitive. He’s thought things through. While he might have used his service-issued 9 mm to do the job, he’s decided instead to go with a more lightweight .22. To some people, a pistol is a pistol. But to the man, nothing could be farther from the truth. Because had he chosen to do the job the absolute right way—the barrel of the 9 mm pushed up against the soft upper pallet of the mouth in the standard method of “eating one’s piece,” he would almost guarantee himself a quick death.

Problem is, that “good death” would leave one hell of a spatter mess behind for some poor soul to have to clean up after him. So instead of choosing the safe, “good death,” he’s opted for the more thoughtful
no-mess, easy cleanup
kind of suicide—the assassin’s death. Because only a professional killer with a steady hand knows that a .22 caliber bullet ain’t got no chance in hell of exiting the skull once it’s made jelly filling of his brains.

In theory at least.

Outside the window, the wind picks up.

The chimes that hang from the eaves make a pretty, jingly, ambient music.

The Super 8 memories inside his head have ceased. His life story—the entire affair from birth to this very moment some thirty-six years later have officially flashed before his eyes.

Man swallows a lump, thumbs back the hammer. The mechanical action reverberates inside his skull.

There’s no stopping him; no penetrating the resolve of the already dead. He’s happy with himself for the first time in he can’t remember how long. So happy, his entire body weight seems to empty itself from out the bottoms of his feet. That’s when a red robin perches itself on the brick ledge just outside the picture window. Just a small scarlet feathered robin that’s beating its wings and staring into the house with its dark eyes.

“What’s it like to die?” the man whispers to the bird.

He plants a smile on his face a split second before he pulls the trigger.

I AM LED INTO a four-walled basement room by two suited agents—one tall, slim and bearded; the other shorter, stockier, clean shaven. The space we occupy contains a one-way mirror which I know from experience hides a tripod mounted video camera, a soundman and several F.B.I. agents, the identities of whom are concealed. There’s no furniture in the room, other than a long metal table and four metal chairs. No wallpaper, no soft lamp light, no piped-in music. Just harsh white overhead light, concrete, and a funny worm smell.

As I enter the room for the first time, tall agent tells me to take a seat at the table.

“We appreciate your cooperation,” stocky agent jumps in.

Out the corner of my eye, I catch my reflection in the mirror. I guess you can say I’m of medium height, and not too badly put together for forty, thanks to the cross-training routine my G.P. put me on not long after my hospital release. Nowadays, my head is Mike Stipe shaved. There’s a small button-sized scar behind my right earlobe in the place where the fragment of .22 caliber bullet penetrated the skull. I wear a black leather jacket over black jeans and lace-up combat boots left over from my military service during the first Gulf War. My eyeglasses are rectangular. They make my stubble-covered face seem slightly wider than it really is. So people have told me.

Having been led to my chair, I am then asked to focus my gaze directly onto the mirror so that the video man stationed on the opposite side of the glass can adjust his shooting angle and focus.

“Please say something,” requests the short, stocky agent to my left while removing his suit jacket, setting it over the back of an empty chair.

“There once was a cop from Nantucket,” I say in the interest of breaking the ice.

But no one laughs.

“You get that?” the taller agent barks out to no one in particular.

“Knock it off,” Stocky agent orders. Then turning back to me, “Before we get started, can we get you a coffee? A cappuccino?”

Stocky agent shakes his head, rolls up the sleeves on his thick arms, reaches across the heavy wood table, grabs the ashtray, places it in front of me.

“Let’s get started, Mr. Divine,” he says in this deep, affected voice. “You already know the routine. For now we just want to get to the bottom of the who, what, wheres and hows of this matter.”

“You forgot the ‘why,’” I say, firing up a Marlboro Light. “You need to know the
why
to establish an entire familiarity with any given case.”

Tall agent does a double take, smiles. Like he knows I’m fucking with him.

I guess it’s important not to take life too seriously.

The Hustle by Doug Merlino
The Shadow of the Wind by Carlos Ruiz Zafón
Bad Thoughts by Dave Zeltserman
Double Standards by Judith McNaught
Jinxed by Inez Kelley
Heresy by S.J. Parris
The Distance from Me to You by Marina Gessner
pdf - Saving Jenna.PDF by Linda Eberharter
Hammer of Time (The Reforged Trilogy) by Lindquist, Erica, Christensen, Aron
Book of the Dead by Patricia Cornwell