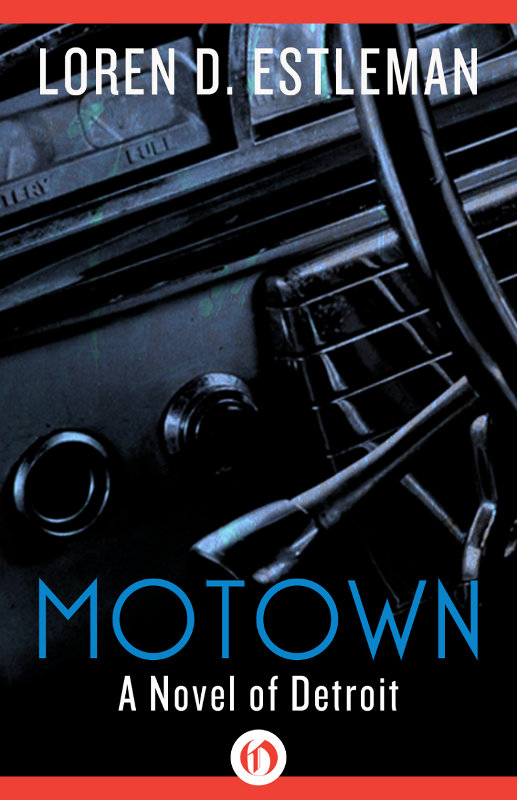 For Barbara Beman Puechner, who has never acquired the knack of separating being an agent from being a friend.

We may be able to pacify every village in Vietnam over a period of years, but what good does it do if we can’t pacify the American cities?

Steel front, divided grille, stacked headlights, 389 V-8 engine under a Tempest hood. Bench seats, for chrissake, and a chicken-leg family-car steering wheel, in partnership with a mill and four-speed trans that cried out for bucket seats and padded leather.

Every time Rick took it out he wanted to pull into a garage somewhere, gut the interior, and do it over in black leather-grain Naugahyde, punch a hole in the hood and drop in real twin scoops in place of the factory dummy. Let the big 389 breathe.

Instead he drove it down to the corner and washed and rinsed it for fifty cents and parked it behind the bays and Turtle-Waxed it and brought it home.

He was pulling down the garage door when Mrs. Hertler came out of the house and stood in front of him, kneading her hands in her apron. She always did that when she had something unpleasant to pass along, a nasty job that needed doing or a visit from one of Rick’s old associates.

Except when she went out, in her cloth coat and gray felt teardrop hat with a blue feather in the band, he had never seen her without an apron. She was a gravity-bound woman of Eastern European background with hair like copper wire pulled back and twisted into a knot behind her head. Her eyes were a startling blue in the faded face.

“Bob is coming home,” she said.

He turned the door handle, locking it, and straightened. “When?”

“Next week, Tuesday or Wednesday. They’re discharging him a month early. He thinks he can get a ride on a mail plane.” She kneaded. “I’m sorry, Rick.”

“You shouldn’t be. It’s always good news when a son comes home from the army.”

“Do you think you can find a place?”

“Sure. The only reason I haven’t looked before this is I got spoiled by the rent. I’d have been glad to pay more.”

“No, I liked having someone in Bob’s room. And I know he’ll be grateful you took such good care of his car. He’s so proud of it.”

Then why didn’t he pop for a four-barrel carburetor instead of air conditioning?
Aloud Rick said, “I’ve enjoyed it. I like cars.” He paused. “I’ll miss your cooking.”

“You don’t have to. You’ll always be welcome at our table.” As she said it—“
our
table”—he knew the invitation would never come to anything. The presence at home of Specialist Robert C. Hertler would cut whatever cord bound Mrs. Hertler and Rick Amery. She let her apron fall. “Are you home for dinner tonight?”

“Take it, you don’t have to ask permission. Are you going with someone? Julie?”

“I liked Julie,” she said. “I thought—well. I guess I have to be someone’s mother, don’t I? What are you going to see?”

“Isn’t that a long way to go to see a movie? I’m sure it’s playing somewhere closer.”

“Not at a drive-in. It’s going to be too nice a night to stay indoors.” He didn’t tell her he preferred to watch racing pictures from behind the wheel. Putting it into words would have made it sound as stupid as it probably was. Anyway, he had just plucked the title and theater out of his memory when asked which picture he was going to; he’d seen it advertised in the
Free Press
but hadn’t thought about going until that moment. He had planned on staying in before hearing the news about Bob.

“Well, if you change your mind.” She shrugged in the continental fashion, without sarcasm, and went inside. The screen door wheezed against the pressure of the spring and clapped shut. He suspected she wasn’t fooled.

He took the outside staircase to the room he’d been using on the second floor of the frame saltbox. Mrs. Hertler had explained that her late husband had built the steps and cut the outside door into Bob’s room when their son, attending the University of Detroit then, complained about lack of privacy. That was the point where Rick had decided he wouldn’t like Bob. Grown men who lived with their parents held no place on his private scale. Grown men who lived with someone else’s mother rated scarcely higher.

The room was large and comfortable, with a west window and its own bath and a double bed under the slant of the roof. The dresser, massive in black walnut with a mirror framed in Baroque gilt cherubs, had come across the Atlantic with Mrs. Hertler and now belonged to Bob, whose other possessions had been moved to the basement when Rick took the room. Most of his own possessions were in storage at his sister’s house and had been since he was forced to give up his apartment in Redford Township. Everything in the room that belonged to him he had carried there in two suitcases, one of them borrowed from his sister. She had offered to make room for him as well as his furniture, but the offer had not been as sincere as his hatred for his brother-in-law and so was easy to decline.

Answering Mrs. Hertler’s
Free Press
classified last summer, Rick had seen the GTO parked in the garage with the door open, its tires soft and a skin of gritty dust on the finish, and had convinced her of the wisdom of getting someone to drive and maintain her son’s car while he was away. She had offered to knock twenty dollars off the rent if he agreed to do this. The deal was set before he had even seen the room. But he would have agreed to it without the discount and stuck to the bargain even if his quarters had turned out to be a hovel. As he had said, he liked cars.

Which was the source of all his troubles.

He stretched out on top of the bedspread in his clothes and read Hunter S. Thompson’s
Hell’s Angels
until the light through the window faded, when he didn’t bother to switch on the bedside lamp to read further. The book was a disappointment: not enough bike stuff. He lay there for a while with the book open facedown on his chest and his eyes closed, not sleeping nor trying to, then put on the lamp and showered and pulled on black chinos and a red sport shirt and his P. F. Flyers and picked up the keys to the Pontiac on his way out.

At thirty-seven, Rick Amery looked twenty and was routinely carded when he ordered a drink in a bar. He was less than six feet tall but seemed taller because of his spare, hipless build. He cut his sandy hair aggressively short to stand out from the proliferation of long-haired teenagers and wore aviator’s glasses with graphite rims when he drove; these had a maturing effect on his features. In the car he slid them from their visor clip, checked them for dust, and put them on. The amber lenses gave the gathering shadows a coffee tint.

He didn’t go to the movies. Instead he took a succession of side streets to Woodward, emptying now of rush-hour traffic, and started down toward Jefferson, teasing and bullying the big engine by turns to avoid stoplights. At that hour, as the light shed by the gooseneck streetlamps whetted its edges on the granite dusk, the pavement turned rich black, like the clean surface of a long-playing record. He felt as if his tires were rolling across virgin asphalt, leaving a clear intaglio behind.

At Warren he missed the yellow by two seconds and stopped with a squelch of rubber. While he was waiting, listening clinically to the dub-dub-dub of the GTO at idle, a black ’66 Mustang cruised up next to him in the outside lane. He could see the streaks of glue on the little backseat window where the price sticker had been peeled off. The car’s long hood and spoiler rear made its profile a shallow wedge, like a shark’s.

A sudden gunning of the Mustang’s engine drew his attention to the driver, for him the least important component of any car. He saw a man in his early twenties wearing mirrored glasses and a lot of black hair pushed back behind his ears, grinning at him. The engine roared again.

It wasn’t the first time Rick had been invited to drag on Woodward. The avenue’s broad expanse was like a strip, as straight and flat as an airplane runway and divided into blocks of equal size. The V-8 Pontiac—even the early model Rick drove, wider and boxier than later GTOs and loaded down with chrome—just naturally attracted challengers. Maybe it was the scarlet paint job. He returned his gaze to the windshield. He never raced.

The window on the driver’s side of the Mustang squeaked down. The kid with the hair was shouting something. Rick looked at him again.

“Ford’s town, asshole! Crap or get off the can!”

Rick turned his head just as the light changed.

He popped the clutch and squashed the footpedal to the firewall.

The swell of the 389 boxed his ears. The tires shrieked, bit, and hurled the car forward; Rick felt the sickening lift and jar as the front wheels left the earth and slammed down. The steering wheel yanked his arms straight, his neck whipped, and the gray Detroit scenery became a white wipe.

He didn’t look to see if the Mustang was keeping pace. This kind of driving required two hands on the wheel and both eyes on the road. He shifted without being aware that he was shifting. The changes in pitch were like gulps of oxygen.

They tore across Hancock, nicked a red light at Forest, and closed in on Garfield seconds too late for the yellow. Rick clutched and braked, baring his teeth at the cry of tires. To his right the Mustang, a beat behind, barely slowed and took the corner on two wheels and a fingernail. The phrase
sore loser
came to Rick just before he saw the red throbbing in his mirror. The wail of the siren reached him then like a crucial piece of information remembered too late.

He had the registration out of the glove compartment and his driver’s license in his hand when the officer approached, a big man in the loose blue uniform with brown leather patches whose design hadn’t changed in Rick’s memory. The officer hovered just behind the window post with his fingers on the black rubber butt of the Smith & Wesson in his holster. His head was somewhere above the Pontiac’s roof.

The silence was long enough to tell him that that was the wrong answer.

Finally the officer accepted the items Rick had been holding through the open window. A flashlight snapped on.

“Who’s this Robert Hertler on the registration?”

“My landlady’s son. I’m taking care of the car while he’s away.”

“He know
how
you’re taking care of it?”

Rick said nothing to that.

“Hold on. Are you
Rick
Amery?”

He caught the officer’s change in tone.

Espadas y magia helada by Fritz Leiber
The Winter of Candy Canes (A Sweet Seasons Novel) by Viguie, Debbie
The Age of Miracles by Marianne Williamson
Serving Celebrities: The Complete Collection by Ryan, Bill
Not Really the Outdoor Type by Paige Tyler
A Million Heavens by John Brandon
Outnumbered (Book 6) by Schobernd, Robert
Seduced by the Baron (The Fairy Tales of New York Book 4) by Amy Andrews
American Heroes by Edmund S. Morgan
Her Valentine Family by Renee Andrews