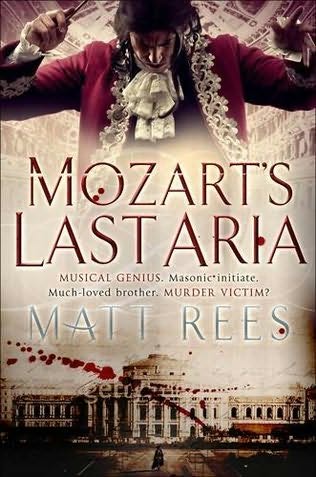 To Devorah,
who is all the music I need.

In October 1791 Wolfgang Amadeus Mozart, the greatest musical genius the world has ever seen, told his wife he had been poisoned. Six weeks later, at the age of thirty-five, he was dead.

The truth, the truth, even if it be a crime!

W
hen she sang, it was hard to imagine death was so near.

Her maid let me in at my usual time in the mid-afternoon. A soprano voice of considerable purity came from the front of the apartment.

“Someone’s visiting her, Franziska?” I asked.

I passed through the sitting room. She was singing Zerlina’s aria from
Don Giovanni
, in which the peasant coquette describes the desire beating in her chest. Her voice quieted for the last line, an invitation to the girl’s suitor: “Touch me here.” A raw tone infiltrated as she repeated those words to a crescendo. The concluding note weakened and quavered.

I heard a dry cough as I went through the door to Aunt Nannerl’s bedroom. Her thin hand conducted an imaginary orchestra through the coda.

She laid her fingers on the bedspread and dropped her chin to her chest. Was she hearing the applause of an audience? Perhaps the effort of singing exhausted her.

The lids of her blind, old eyes flickered. I pondered the life she had led and all that she had seen, gone now forever. As a musician, I understood the secrets a composer hides in the pages of his score, locked away from those unable to comprehend the fullness of his creation. I was hardly aware of it, but I had been less perceptive as a nephew.

My visits to her home near Salzburg’s cathedral had been so frequent, I would have been tempted to conclude that I knew everything there was of her to be learned. Her renown as a child prodigy on the keyboard, her adolescent performances with my father in Europe’s great cities. Marriage to a provincial functionary and elevation to the minor nobility, so that she had borne the title Baroness of the Empire since 1792. Then after her husband’s passing, her return to Salzburg, where she taught piano until her eyesight failed.

This presumption to summarize her seventy-eight years was, in fact, the thoughtless dismissal of an enfeebled old woman by a younger man. I say this with certainty, because today she revealed to me a life more fantastic even than her famous history would suggest.

Her singing done, my aunt lay silent and still in the narrow bed. She wore a lace nightshirt and a simple shawl around her shoulders. I kissed her dry cheek, drew up a chair, and recounted the gossip of the town. She didn’t register my presence.

When I grew silent, she reached out, moving with a swiftness that surprised me, and pressed hard on my hand. Her fingers retained the power of a lifetime in which she sat at the piano three hours or more each day, exercising the skills that once entertained kings and princes and counts. “Play for me,” she said.

Her pianoforte was a fine old grand by Stein of Augsburg. I gave her the Sonata in A by my father. I wished for her in her frailty to feel roused by the dance rhythm of its Turkish rondo. As I played, she fingered a gold cross inlaid with amber which she wore around her neck. Her blank, sightless eyes were wide. When I finished, she croaked out my name: “Wolfgang.”

She turned to me as though she had expected someone else to respond.

When I first came to play for her, she told me that I reminded her of my father. In truth my hair and eyes are dark like my mother’s and my talent at the keyboard is of a kind that he would no doubt have described as mechanical. I have nothing of his genius. But I
am
named Wolfgang, and perhaps for Aunt Nannerl that much resemblance sufficed. Until that moment. I sensed that she spoke directly to the man thirty-eight years dead who had been her little brother. The man famed throughout Europe and even in America as an unmatched composer.

“On that shelf. In a box inlaid with mother-of-pearl.” Her hand lifted from the quilt with an unaccustomed grace that made me wonder if she were already dead and I was gazing upon her spirit, rising free of her fragile bones and decaying skin. I opened the casket and, beneath some old painted ribbons, I found a volume in nicked brown leather. I placed it in her grasp.

“May the Lord forbid it, dearest Auntie. Don’t speak of such things.”

She flipped back the book’s cover and ran her fingers over the dry, yellowed pages within. A quill pen such as few have used for years now had filled the book with lines slanting upward from left to right. I recognized the hand as her own, for she had often written to me as I toured the concert halls of Poland and Prussia. She turned a few pages and spread her bony fingers across the text. On the first line, I read a place and a date:
Vienna, December 21, 1791.

She shut the book with a clap that was like a cannon shot through the silence of her apartment. In the instant that it took me to blink in fright, the leather-bound volume swung toward me and dropped into my fumbling grasp.

“Don’t show it to your mother,” she said.

“Why not?” I smiled. “What secrets do you keep, Aunt Nannerl?”

Her faint eyebrows lifted and I felt that a much younger woman fixed me with those melancholy brown eyes.

“Upon my death I shall leave to my son Leopold all that I have,” she said. “He’ll inherit my money, my few valuable pieces of jewelry. Also my papers, my diaries, my daily books. Mostly dull chronicles of the simple routines of Salzburg and the village where I passed my married life.” She sucked for breath. Her head lapsed against the pillows.

I lifted the volume in my hand. “But this—?”

“Something different. Only for you.”

“Is it about my father?” I could ill disguise my eagerness, for I was just a few months old when he was taken from us. He has been with me always at the piano, though only as the mythic gods of Olympus could be said to have been with the Greeks when they ground wheat for flour.

My aunt swallowed hard and coughed. I thought perhaps I had been mistaken. After all, when I used to ask her about my father’s last years in Vienna, she always pleaded that she hadn’t seen him after 1788, when my grandfather’s will was settled in her favor and a coolness arose between the siblings. She had remained with her husband in the village of St. Gilgen. My father had continued his career in the opera houses and aristocratic salons of Vienna, until he was cut down three summers later in his thirty-sixth year.

Her lips pursed, she gathered herself. “That book records the truth about events that have shaped your life—and all musical history.”

“It
is
him,” I said, striking the notched surface of the leather binding in excitement.

She shook her head. The hair, which her maid had dressed high and old-fashioned even though she lay in bed, rustled across the pillow as if it were hushing me, commanding my silence.

I heard a sound like the final exhalation of a dying soul. I couldn’t tell if it emanated from my aunt or from me, or perhaps it was the grieving spirit of my poor father. I would’ve spoken, but my breath chilled, my ribs seemed to close in on my lungs, and my cravat was suddenly tight around my high collar.

Flicking her wrist in dismissal, Aunt Nannerl subsided onto her pillows.

I hastened to my room in my dear mother’s house on Nonnberg Lane, almost at a run up the steep steps beneath the cliffs. The leather of my aunt’s diary darkened with the sweat of my palm, though the day was cold enough that the first snowfall threatened.

At home, I wiped the perspiration from the cover onto the leg of my breeches, closed my eyes to whisper a Hail Mary for my father’s soul, and opened the book.