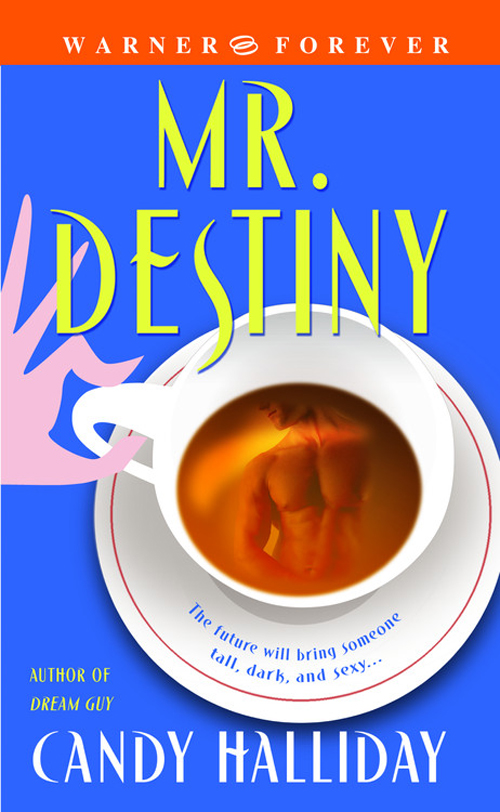 “FOUR STARS! Laugh-out-loud funny…a fast-moving romance… an appealing story that is fun without being silly.”

“A lighthearted, contemporary war of the sexes using technology to further the skirmishes… Fans will enjoy this fun tale that
is one click away from providing the
Dream Guy
.”

Excerpt from
Your Bed or Mine?
copyright @ 2005 by Candy Viers All rights reserved. No part of this book may be reproduced in any form or by any electronic
or mechanical means, including information storage and retrieval systems, without permission in writing from the publisher,
except by a reviewer who may quote brief passages in a review.

Warner Forever is a registered trademark of Warner Books.

For Shelli and Tracy—truly destined to be together.

A Preview of
Your Bed or Mine?

Special thanks always to Jenny Bent, agent extraordinaire. Extreme thanks to Karen Kosztolnyik, editor incredible. Thank
you always, Blue, for putting up with me. Quint and Caroline—you make my life complete.

The summer heat wave assaulting New York City had nothing to do with it.

Here she was, Miss Efficient Art Gallery Manager, overseeing the annual “Art in Central Park” outdoor exhibit cosponsored
by the Metropolitan Museum of Art. Yet, what was she doing? She was fantasizing about the handsome mounted patrol officer
galloping up the path in her direction.

Fantasizing about him
naked
, to be exact.

That, and her pesky subconscious trying to challenge her belief that size didn't matter.

Not if you were a prominent corporate attorney with a no-nonsense outlook on life that would finally bring focus and clarity
to her life.

She'd met Harold Trent Wellington shortly after her time-to-grow-up-now thirtieth birthday. From their first date, Kate had
known Harold was exactly the type of man she needed to keep her grounded. Harold was handsome by any woman's standards—tall,
lean, a touch of distinguished-looking premature gray at his temples. He was older and settled, another plus. They shared
the same interests: opera, art, the finer things in life.

Proof being, overseeing today's outdoor art exhibit; a responsibility her still-in-her-irresponsible-twenties self wouldn't
have been able to handle in her
pre-Harold
days.

So size didn't matter at all.

She blinked twice, willing the officer's naked image to go away. It didn't. Her fantasy was still nude, rippling muscles everywhere,
begging to be touched.

The total opposite of Harold
, Kate thought briefly.

Harold's only interest had been in passing the bar, not in pumping one.

Now the police officer was staring back at her just as intently.

Had he read her mind?

There was no way the officer could have known what she'd been thinking. Still, the look on his face was more than just perplexed.
He looked shocked. As if he couldn't quite believe what he was seeing.

Kate sent a nervous look around her, pleased to see the crowd of people milling in and around the exhibit couldn't have been
more orderly. There were a few couples, several small groups, one or two lone art admirers. Many of them were regular customers
she recognized, politely showing their support for Anderson Gallery of Fine Arts. Everyone was even speaking in hushed tones,
as if the exhibit were being held inside at her grand-mother's prestigious art gallery in SoHo, one of the most notable art
galleries in the city.

No, nothing was amiss with the crowd.

Nor would he find anything wrong with her paperwork, if that was the reason for the concerned look on the officer's face.
She had a permit and everything else in order right there on her clipboard.

Was he looking at her?

Or was he staring at the painting beside her?

Kate glanced at the oil painting sitting on an easel to her right. She'd never cared for the artist who called himself “Apocalypse.”
His paintings were usually dark and violent. But there was nothing offensive about this painting. Who could possibly be offended
by a painting of the Madonna and Child?

She squared her shoulders when the officer pulled on the reins, bringing his mount to a stop a short distance away from her.
He slid one leg easily over the back of the horse. The second his shiny black boots hit the ground her fantasizing stopped.

He was fully clothed again.

He walked up and stopped in front of her, the name on his badge announcing he was Officer Anthony Petrocelli.

An Italian on a stallion
, Kate thought.

No wonder her libido had kicked into overdrive the minute she saw him.

She followed his gaze to the painting. “From your expression, I can't tell if you like this painting, or if it disturbs you,”
she said. “And that's a first for me. I can usually read people pretty well.”

His sexy grin caught her off guard.

She was
not
going to let her gaze drift any lower than his chin—even if he held his gun to her head.

He didn't reach for his revolver. Instead, he unsnapped his chin strap and took off his helmet.

He was all male and even more handsome than she'd imagined. Sexy brown eyes. Chiseled features. Olive skin. Just a hint of
a five-o'clock shadow running along his strong angular jaw.

Maybe it was the contrast between this guy and Harold, Kate decided, that made him so appealing to her. He had that reckless
unrefined edginess about him—something calm, cool, and always collected Harold didn't have.

He ran a hand through his short black hair and hit her with another grin. “I don't know how to tell you this,” he said, “but
you and I were destined to be together.”

The fantasizing was definitely over.

After an idiotic statement like that one, he could have been stark naked with a willy the size of Texas, and she still wouldn't
have been interested in Officer Anthony Petrocelli.

Kate sent him a bored look. “That has to be the corniest pickup line I've ever heard.”

“I'm not trying to pick you up,” he said quickly. “If you'll let me explain, I think you'll understand why I had to stop and
talk to you.”

His challenging look called her a liar. “A total stranger walks up to you. He tells you the two of you are destined to be
together. And you aren't the least bit interested in why a guy would be willing to make a complete fool of himself with a
statement like that?”

“Not in the least,” Kate said.

Of course she was curious.

But she wasn't going to
tell
him that.

For all she knew he could be some weirdo pervert who was only impersonating a police officer. Except for the horse, she decided,
glancing past him for a second. She doubted even a pervert would go to the trouble of rounding up a horse. Plus, this was
one
fine
-looking weirdo pervert, if he was one. One she doubted had any trouble whatsoever when it came to picking up women.

“
I'm
interested in why you would make a complete fool of yourself with a statement like that one.”

Kate turned around to find Alexis Graham, a.k.a. best friend, standing behind her. The best friend who was
supposed
to have arrived at the exhibit hours ago to lend support.
And
the best friend who was also camping out on Kate's sofa at the moment, thanks to the current squabble Alex was having with
her husband.

Alex was dressed for success as usual—a power suit befitting her important AT&T executive title. Her signature short dark
hair was heavily moussed and slicked back dramatically—manly almost. Except there had never been anything
manly
about Alexis Graham. Not her seductive grin. Not her flirtatious personality. Definitely not her dynamite all-woman figure.

“Oh, come on, Kate,” she said. “Let the officer tell us his story.” She ignored Kate's stern look, stepped forward, and thrust
out her hand. “Alex Graham, best friend.” She looked back at Kate. “This is Kate Anderson.”

He smiled. “Are you the artist, Kate?”

Her mind was wandering back in the naked direction again. It made no sense, but now that she knew he wasn't trying to pick
her up, it was safe to fantasize about him. Besides, fantasizing was harmless. Her thoughts were her own. It wasn't anybody's
business if standing this close to a man with such raw sex appeal made her want to…

Alex punched Kate with her elbow.

“What?” Kate said when Alex sent her a what's-wrong-with-you look.

Alex looked back at the officer. “No, Kate isn't the artist,” she said. “Kate's grandmother owns the gallery hosting this
exhibit. Kate is the manager of Anderson Gallery of Fine Arts.”

Her best friend was giving her fantasy way too much information.

Alex ignored Kate's frown and smiled at him.

When he happily smiled back, Kate's eyes betrayed her and moved slowly down from his chin. Lower, lower…

“It's ironic you should bring up the subject of grandmothers,” he said. “My grandmother is the reason I'm standing here now.”

Grandmothers had no place in the middle of her fantasy.

He pointed to his name tag. “Petrocelli. Think big, meddlesome, Italian family. That would be mine. Think an adorable but
eccentric grandmother from the old country. That also would be mine. A grandmother who reads tea leaves for the male members
of the family on their sixteenth birthdays so she can make a marriage prediction.”

Kate was still only half-listening. Her gaze kept wandering back to his mouth. He had the most incredible lips. Full, yet
firm. The kind of lips that would…

He laughed, snapping her back to the conversation.

“I'm glad you think tea-leaf reading is fascinating, Alex,” he said. “I call it ridiculous.”

Versailles by Kathryn Davis
Clive Cussler by The Adventures of Vin Fiz
Final Justice (Lorne Simpkins thriller (Book Three)) by Comley, Mel
Children of Scarabaeus by Sara Creasy
The Avengers Battle the Earth-Wrecker by Otto Binder
Be With Me in Silicon Valley: The Juliette Trilogy (The Princesses of Silicon Valley - Book 3) by Anita Claire
Ocean Kills (Ocean Breeze) by Hart, Jade
The Ashes by John Miller
The Forgotten Girls by Sara Blaedel
Redemption (Dawn of the Damned Book 1) by Connie Chance