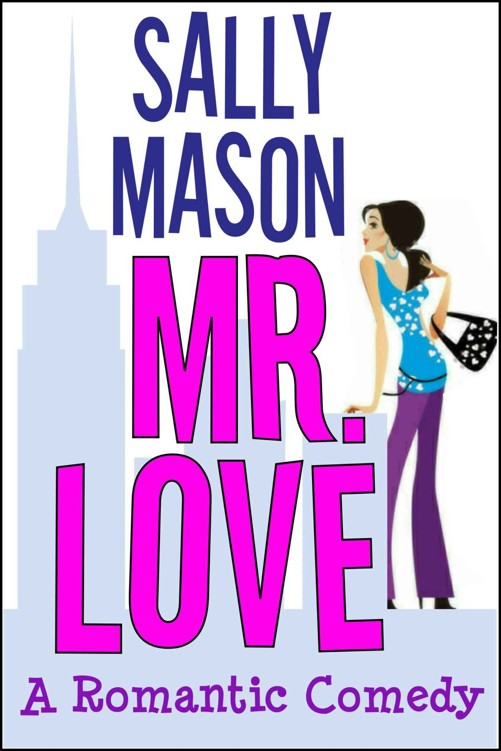 Rent A Husband: A Romantic Comedy

Mr. Love
is a work of fiction. Names, characters, places and incidents are the products of the author’s imagination or are used fictitiously. Any resemblance to actual events, locales, or persons, living or dead, is entirely coincidental.

No part of this book may be reproduced or transmitted in any form or by any electronic or mechanical means without the express written permission of the author or publisher except where permitted by law.

“
Any fool can tell the truth,

but it requires a man of some sense

to know how to lie well.”

When Jane Cooper—exhausted after catching the red-eye from Portland—enters her Manhattan apartment at 6:30 A.M. and hears the muffled thud of ancient disco she assumes it’s her vile neighbor and is about to bang on the wall with one of the high heels she’s just ditched (what had possessed her to travel in those things?) when she realizes the strains of “Love To Love You Baby” come from her bedroom.

She has to laugh at the image of her live-in fiancé, the oh-so-buttoned-down lawyer Tom Bennett, doing his morning workout to the soundtrack of Donna Summer
, something he would
never
let her witness.

As Jane approaches the closed bedroom door and hears thuds and bumps she’s pleased she made the impulsive decision the night before to avoid the closing cocktail party of the awful book fair in Oregon—three days of desperate wannabe authors trying to foist their unreadable manuscripts on a real live New York literary agent (okay,
junior
agent) at the interminable pitch sessions—and fly home twelve hours early to surprise Tom on the morning of his twenty-eighth birthday.

She slips a gift-wrapped first edition of
The Firm
from her wheely suitcase and approaches the door. Tom is a big John Grisham fan, which she’s almost learned to forgive him for.

The only good thing that happened to her in the last few days
was finding this book in a Portland Salvation Army thrift store.

As Jane throws open the bedroom door and shouts “
Surprise!
” she sees something boiling beneath the covers of the bed and is presented with the sight of a pair of naked female butt cheeks dashing into the bathroom.

Her fiancé surfaces from under the comforter wearing a smile designed to win over juries and says, “Janey! Wow!”

Jane, blinking, sure she is suffering some kind of sleep-deprivation
induced hallucination, says, “Tom, what’s going on?”

Which, really, has to be the dumbest line ever.

Until
he
speaks again, that is.

Staring down at her fiancé, Jane is aware that the shape under the covers is too bulky to be just that of the slender Tom Bennett, so she whips off the comforter and reveals a blonde woman in some kind of
black rubber S&M outfit crouched over his loins like a feeding predator.

Jane, who appears bookish with her glasses and her pale skin, was in
fact raised on a diet of sit-coms and edgy stand-up (she knew who Lenny Bruce was long before she made the acquaintance of his near-namesake in Steinbeck’s
Of Mice and Men
) and has the habit, when she is stressed, of spewing one-liners.

“Okay,
Tom,” she says, “please tell me there isn’t a large lady with a strap-on hidden in the closet?”

The door to the closet creaks and Jane turns to see a very beefy
naked woman sporting a mullet, something oily and obscene jutting from her midriff.

Jane feels her legs turning to liquid and has to put a hand to the wall to stop herself from toppling.

She closes her eyes and breathes away the dizziness.

When she opens them Tom, covering himself with a pillow, stands before her.

His freak show friends, including the blonde who has emerged from the bathroom in Jane’s toweling robe—
eew
, this, somehow, is the grossest violation of all—lurk behind him, staring at her.

She slaps him
through the face with the Grisham novel and he’s so shocked that he drops the pillow when he lifts a hand to his stinging face.

Another Jane takes control, and this Jane has her iPhone in her hand, shooting off a succession of pictures of th
e tableaux that would have made Diane Arbus blush.

“I’m going downstairs to get some coffee,” the new Jane says in an admirabl
y calm voice, “and when I return you, your little friends and all your possessions will be gone from my apartment. Drop your keys in the mailbox on your way out. Do you understand, Tom?”

“The only thing I regret is not having the
stomach to John Wayne Bobbitt you.”

This
gets a laugh from the blonde, who must be at least fifty, the only one old enough to remember the emasculated Mr. Bobbitt.

“If you
’re not gone,” Jane says, wagging her phone in Tom’s face, “these happy snaps will be emailed to the senior partners in your law firm. Are you hearing me,
counselor
?”

Jane spins, collects her shoes in the passageway and leaves her apartment.

A
lone in the elevator she closes her eyes and rests her face against the cool mirror until she reaches the lobby.

That Gordon Rushworth opens the front door of his sister’s cottage onto a vista straight from the pages of a travel brochure goes unremarked by him.

He is
immune to the charms of the Vermont village—white clapboard houses with picket fences; a picture-ready church with a spire sporting a clock and a weather vane; a cute little Georgian firehouse—and blind to the vivid backdrop of Fall foliage: crimson maples, syrupy yellow poplars and russety oaks, garish in their profusion.

He only has eyes for the postman, a crusty old party who humps his
satchel through the streets of East Devon each morning, spending more time exchanging pleasantries with his cronies then he does distributing the mail.

But here he comes, bony knees red as bobbing apples beneath his
blue shorts (he seems impervious to the chill that hints at an early winter) and a horsy Puritan’s face shadowed by a baseball cap.

Gordon,
sipping from a mug of what passes for coffee in his sister’s house, pretends to be inspecting a listing wooden fence post, infested with termites, not wanting to appear overeager lest the postman pass the cottage by as he has most days this week.

“Morning,” Gordon says, trying not to let the use of the honorific rankle him.

How is this cretin to know that Gordon’s once promising academic career that
had begun at Harvard had fizzled and died in a hick college in North Dakota, where as an
assistant
English Literature professor, he was denied tenure and let go with little ceremony or regret three months ago?

That, unable to find employment, he had to return to the loathsome town he’d fled as a teenager and was now camping out in his flakey sister’s living room?

Or maybe he does know, this gossip merchant with his tight mouth and rheumy eyes, and uses the title with malice of forethought.

“Professor, you hearin’ me?”

“Said I got a letter for you.”

Gordon all but snatches the envelope from the postman and hurries inside without a word of thanks.

He scans the envelope: that it’s addressed to G. Rushworth means nothing.

His sister—who goes by the name Bitsy, from her middle name, Elizabeth—was baptized Gwendolyn, and he flips the envelope half-expecting to see the return address of one of the New Age charlatans who milk his gullible sibling.

When he sees the name of
New York’s most prestigious literary agency, he feels a tightness in his throat.

This is it, the letter he has been waiting for.

The letter from the most important agent to whom he submitted his massive, ten-years-in-the-writing novel.

There have been rejections already,
of course, by email, terse one line dismissals from lesser agents.

But this letter
is the one on which he has been pinning all his threadbare hopes.

Too nervous to open
it he sets the envelope down on the coffee table and seats himself on the sleeper couch that still holds a blanket and pillow.

Gordon
takes a few deep breaths and has just about summoned up the courage to rip open the envelope when the door to his sister’s bedroom creaks and she appears, sobbing, her eyes glued to her Kindle as she walks toward the kitchen.

“This is just so beautiful,” she says. “So tragically
, sorrowfully beautiful.”

This
is
Ivy
, the latest bit of self-published chick-lit trash that has captivated the nation.

Even the august
New York Times
reviewed it a few days ago, praising it for its acute insights into the “post-feminist, post-modern, post-everything female psyche.”

Bi
tsy sniffs her way into kitchen, eyes never leaving the glowing face of her e-reader.

Gordon waits for her to disappear from view, mutters what passes as a prayer and opens the envelope.

The page that he draws out is on fine bond paper, with a clean, almost vanilla scent.

When he unfolds the letter and sees that it is handwritten, his heart pounds.

Would the great man w
ield a pen lightly?

Gordon composes himself and reads.

The single paragraph missive has the effect of a hobnail boot in the gut.

Words like
leaden
and
turgid
and
pompous
assault him.

But the last line
s are the coup de gras: “Sadly, Mr. Rushworth, your ambitions outstrip your talent and this doorstop of a manuscript could benefit from a crash diet; perhaps if reduced to a modest short story it would be better digested?
Too Long the Night
is too long!”

Gordon
lets the page float to the floor and slumps back on the couch, feeling as gutted as one of the deer his savage stepfather had forced the young Gordon to dress on their nightmarish hunting trips.

“No, no,” Gordon says, using his
shoe to edge the rejection letter and its envelope beneath the couch. “Just some correspondence from South Dakota.”

“I can see it. When you lie your aura turns a nasty shade of
puce.”

“Another agent has rejected your book, right?”

He doesn’t answer, making for the front door.

“How many times have I told you, Gordy, the world doesn’t want brainy novels full of ten-dollar words? It wants this,” she taps her Kindle, “love and light and romance. When are you
going to take my advice?”

Hand on the doorknob, he almost
spins and says, “Oh, but I did, Bitsy. I took your advice. I hid here all summer when you were away at Camp Chakra or whatever the hell you call it, and in sheer desperation I banged out that execrable piece of junk you and your world can’t seem to get enough of.”

But, of course, he doesn’t.

He just walks out into the street, a thirty-five year old tormented genius in his academic’s uniform of corduroys and tweed jacket with elbow pads.

And the fact that his shlocky piece of chick-lit, written under a
female alias, is being downloaded at a rate of one a second—turning him into a very rich man—does nothing to ease his sense of desolation.

If anything, it sharpens it.

The Power of a Praying Wife Devotional by Stormie Omartian
Skyfire by Mack Maloney
Concrete Desert by Jon Talton
Mamba Point by Kurtis Scaletta
This Dark Endeavour (with Bonus Material) by Kenneth Oppel
The Great Texas Wedding Bargain by Judy Christenberry
Love Finds You in Groom, Texas by Janice Hanna
The Nuclear Catastrophe (a fiction novel of survival) by Billig, Barbara C. Griffin, Pohnka, Bett
Barefoot in White (Barefoot Bay Brides) by St. Claire, Roxanne
Path of the Sun: A Novel of Dhulyn and Parno by Malan, Violette