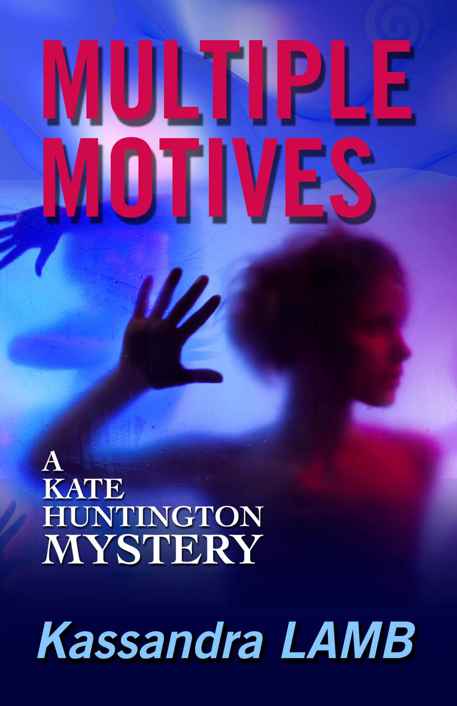 OTHER BOOKS by KASSANDRA LAMB

The Kate on Vacation Novellas:

An Unsaintly Season in St. Augustine

Cruel Capers on the Caribbean
(Spring, 2014)

ECHOES, A Story of Suspense

All Rights Reserved. No part of this book may be used, transmitted, stored, distributed or reproduced in any manner whatsoever without the author’s written permission, except very short excerpts for reviews.
The scanning, uploading, and distribution of these books via the Internet or by any other means without the publisher’s/authors’ express permission is illegal and punishable by law.

Multiple Motives
is a work of fiction. Names, characters and events are ALL products of the author’s imagination. Any resemblance to actual events or people, living or dead, is entirely coincidental. Real places in this novel may be used fictitiously.

The publisher has no control over and does not assume any responsibility for author or third-party websites and their content.

without whose friendship, encouragement, feedback,

and willingness to read the manuscripts multiple times,

this series never would have happened.

And to all the wonderful people who read and critiqued

this book and helped me make it better.

The vehicle cruised sedately down the street.

Don’t want to be getting a speeding ticket and draw attention to ourselves, now do we?

The driver of the vehicle pulled into a parking place near the intersection. The target had crossed here the day before, striding briskly along the crosswalk like she owned the world.

It starts today. With her!

The numbers on the sign above the bank building rolled over from 11:56 to 11:57. She didn’t always go out to lunch, but that was okay.

If not now, then later. Either way, it starts today.

Kate ushered her last client of the morning to the door, then dug her insulated lunch bag out of her drawer and flopped down in her chair. Sighing, she put her feet up on the corner of the desk.

It had been a long morning, and a bit of a roller coaster ride. She’d gone from convincing a severely depressed new mother that suicide was not her best option to giving dating advice to a woman almost twice her age. The well-to-do widow had desperately wanted to believe the white-haired Romeo at her senior center, who claimed he lay awake every night thinking about her. Kate had gently suggested a swollen prostate was the more likely explanation for his insomnia. The woman had laughed and promised to go slow.

And then there was the client who’d just left–a fragile young woman who was starting to realize her lousy self-esteem was not because she was truly worthless but because she’d been told she was her entire life, first by her parents and then by a string of abusive boyfriends. Kate hoped she’d shored up the woman’s shaky psyche sufficiently that she’d make it through the week without an emergency phone call.

Excitement bubbled in her chest as she popped the lids off containers of raw veggies and low-fat dressing. She looked at the rabbit food skeptically, not at all sure it would stave off her hunger until this evening, when she and Eddie were heading to their favorite restaurant in Towson to celebrate their anniversary.

Client hours on Tuesdays normally extended well into the evening, but today she’d rearranged her schedule and Sally, her boss, was covering emergency calls for her.

So I can turn the damned cell phone off.
The only person she wanted to talk to this evening would be the man across the table from her.

Kate blew an errant dark curl out of her eyes as she wondered again if she was going to look like a fool in the slinky black dress she’d bought on a whim. At thirty-eight, her broad shoulders and a good metabolism still kept her looking trim in tailored office clothes or the jeans and loose shirts she wore around the house. But there were some lumps and sags that hadn’t been there in her younger years, when she’d taken her ability to wear black slinky dresses for granted.

She popped a baby carrot in her mouth and let her mind wander.

Ten years ago today, Kathleen Nora O’Donnell had married Edward James Huntington, Jr. in an Episcopal church–a failed attempt at compromise that had satisfied neither set of parents. “Catholic Lite. Same rituals, half the guilt,” Eddie had quipped at the rehearsal dinner. Kate was the only one who’d laughed.

Her Irish-American parents, warm loving people by nature, had quickly forgiven Eddie his Protestant roots and adopted him into the large O’Donnell clan. But Kate suspected her mother-in-law would never completely forgive her for stealing her only child. Especially since said child allowed his wife to call him Eddie, a nickname that previously only his mother had used.

Despite the subtle tensions in Kate’s relationship with her mother-in-law, the marriage had flourished. Of course there’d been some bumps in the road along the way. Most of the time though, Kate felt like pinching herself to make sure she wasn’t dreaming. Eddie was a kind, thoughtful man, with a delightful sense of humor.

Not to mention
,
he’s not hard to look at and he’s good in bed.

Bed reminded her of the only significant dark cloud in their lives. No babies. Seven years ago, they’d stopped using birth control and allowed nature to take its course. Mother Nature had not cooperated, and time was running out on them.

She glanced at the clock on her office wall, then dropped her feet to the floor. She had four more clients to see before she could go home and squirm into that black dress.

Walking hand-in-hand with Eddie up the dark sidewalk to their front porch, Kate was no longer feeling the least bit self-conscious about her dress. A bit fuzzy-headed from wine, she stumbled on a crack.

Eddie deftly caught her before she could fall. He wrapped strong arms around her and held her against his lanky frame. Several minutes of some serious kissing left Kate even more light-headed.

She gently broke away. “We’d better take this inside before we scandalize the neighbors,” she whispered, her voice husky.

In the living room, she kicked off her pumps and, out of habit, picked up the phone to check their voicemail. Her mood abruptly sobered when she heard incoherent words interspersed with stifled sobs.

Dear God, not a client emergency
. Had the answering service screwed up and patched the call through to her instead of Sally?

She punched the button to replay the message. Fear twisted in her gut when she recognized the voice. She could only make out a few words but the ones she caught made the blood drain from her face.

She turned to Eddie. He froze in the act of pulling off his tie.

“It’s Rob and he’s sobbing.” She faltered, struggling not to cry herself. “I think something’s happened to Liz. They’re at St. Joseph’s Hospital.”

Eddie was already headed back toward the front door. “Grab some comfortable shoes. I’ll start the car.”

As her husband drove through the dark streets as fast as he dared, Kate worried about her friend sitting scared and alone in a hospital waiting area. She imagined his tall frame slumped over, broad shoulders drooping, his face pale under salt and pepper hair. She prayed that whatever had happened to Liz wasn’t life threatening. Rob adored his wife. Kate wasn’t sure he’d survive losing her.

Rob Franklin’s law firm was right down the hall from the counseling center where Kate worked, and they’d consulted on many mutual cases through the years. Most had involved someone trying to get out of a destructive marriage, although they’d referred clients to each other for other reasons as well. She’d found Rob to be a formidable advocate for her clients. In his personal life, he was almost as easy-going as Eddie, but when the chips were down he had a backbone made of steel. On several occasions, she’d watched him rip holes in hostile witnesses in the courtroom.

It was not surprising to her that their work relationship had evolved into a friendship. He was a bright man, with a sharp wit and an intuitive grasp of what made people tick. Nor was it surprising that once they’d started socializing outside the office, they’d become friends with each other’s spouses as well. She and Eddie couldn’t help but love Rob’s wife, whose vivacious and feisty personality seemed too large for her petite body.

Kate’s throat tightened. She blinked back the sting of tears.
Dear God, let Liz be okay.

Eddie spun the car into the hospital’s parking lot. She jumped out before he’d come to a complete stop.

In the surgical unit’s waiting area, Rob’s broad face was even more washed out than Kate had imagined. He started to apologize for disrupting their anniversary, but Kate cut him short. “No, no, dear, that’s okay. I’m so sorry we didn’t come sooner. Our phones were off.”

Rob was shaking as he filled them in. Liz had been run down by a hit-and-run driver while crossing the street after work. All the doctor had said, before whisking her into surgery, was that she had several broken bones and internal bleeding.

Rob hadn’t phoned his daughters yet. Shelley was away at college in Maine, and Samantha was studying at a friend’s house. “It would just upset them. And by the time Shelley could get here, Liz will either….” His voice trailed off.

Be out of the woods or dead,
Kate finished the grim thought in her head.

She mentally put herself in Shelley’s shoes. The Franklins’ eldest was a blend of her parents, but she had enough of her mother in her that Kate knew she’d be furious with her father for keeping her in the dark.

Kate shared her thoughts with Rob. He nodded in response. After refusing her offer to make the call for him, he shuffled down the hall to find someplace that was not plastered with signs prohibiting cell phones.

Eddie went off in search of coffee for all of them.

Kate sat down on an ugly beige couch to wait. She laid her head back against the wall and took in a couple ragged breaths, trying to loosen the knot in her stomach.

She was snorkeling with Eddie in the Bahamas on their honeymoon, holding hands under water. Awestruck, they watched the brightly colored tropical fish swim around them.

She woke, disoriented, to find Rob’s bulk squeezed in beside her on the small couch. He clung to one of her hands. Praying she hadn’t been snoring, she discreetly checked her chin for drool with her other hand.

“… hold onto something,” Kate finished, her heart aching for him.

He nodded. Tears pooled in his eyes.

Eddie came through the double doors down the corridor, balancing three steaming vending-machine cups in his hands. “Who wants bad coffee?” he asked as he approached them.

Kate squeezed Rob’s hand, then released it to take one of the cups.

Rob turned his head away. He swiped his shirtsleeve across his wet face, then blew his nose into an already soggy handkerchief. When he took the proffered coffee cup from Eddie, it was now wrapped in a fresh man’s handkerchief.

Kate’s eyes stung at the sweet gesture. She took a sip of coffee. It truly was awful. She set the cup down on the table beside the couch.

Eddie touched her shoulder and whispered, “Walk with me for a minute.”

Away with the Fishes by Stephanie Siciarz
spies and spells 02 - betting off dead by kappes, tonya
Altar of Anubis by Vremont, Ann
Reclaiming His Pregnant Widow by Tessa Radley
Psycho Thrill--Girl in the Well by Vincent Voss
Whispers of a New Dawn by Murray Pura
Maurice by E. M. Forster
The Cloud by Matt Richtel
Blood Magic by Eileen Wilks
Forever Yours, Sir by Laylah Roberts